February 23, where is the time going? We headed back to the anchorage at La Cruz and dropped the anchor in our usual spot near the channel and where we could be seen from our dear Canadian Flathead Lake Sailor friend’s condo on the beach through their binoculars. The next day we went for one last day sail with them and our new friends, the singers of the band “Us 2 And the Band” that plays at our new favorite bar, The Treehouse. I love day sails! We don’t have any destination, there is no time schedule, we just put up the sails and see where the wind takes us! Again, we lucked out on the weather (I hope we aren’t using up all of our good weather luck)! There was a light breeze to start, then it picked up in the afternoon for a fun sail back to the anchorage. Whales and dolphins were everywhere, including one whale who thought it was funny to sneak up behind us and blow a very loud breath all over our boat before diving beneath us! We didn’t scream- you screamed. OK, we all screamed. I was told that the humpback whales usually leave in March or so to head back north. What a privilege it has been to be here for calving season! It was a fabulous day! 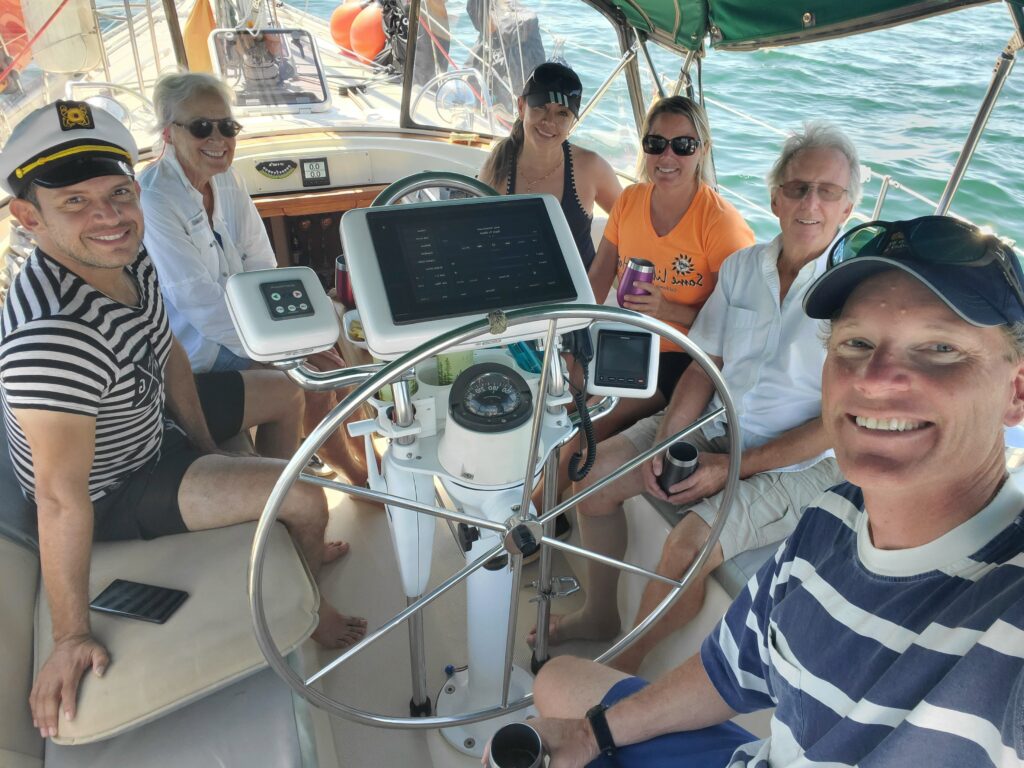 Okay, we have been in Banderas Bay for almost four weeks and have done only one project that we had on the list! We haven’t even started on any others! Originally we thought we would do one project a week, spread out the work and mix in fun. Now we were like students at the end of the semester needing to cram for the test. We better get cracking! We dedicated our entire final week in Banderas Bay to getting projects completed.
Project #1: install a start button in the engine room. Sometimes the ignition key for the engine does not turn on the starter. Sometimes jiggling the key a little will work but often Bill has to go down and hot wire the starter. It has happened so many times that Bill just leaves the wires attached and tucked in a corner. We already bought a cute little red button to connect the hot wires so that we can start it without having to touch the wires together by hand, which by the way is scary! Touch two tiny wires together for a second and right in your face, Big Iron Genny explodes to life, Yikes! We had already decided to mount the button on the plexiglass panel that protects us from the dangerous AC wiring. Don’t accidentally touch that! We even already had the easy slide on, slide off fittings for the button so the plexiglass panel can still be easily removed for repairs. Unlike most projects it worked out exactly as planned! We crimped on the fittings, drilled the hole in the plexiglass, installed the red button, and yahoo! It actually works! 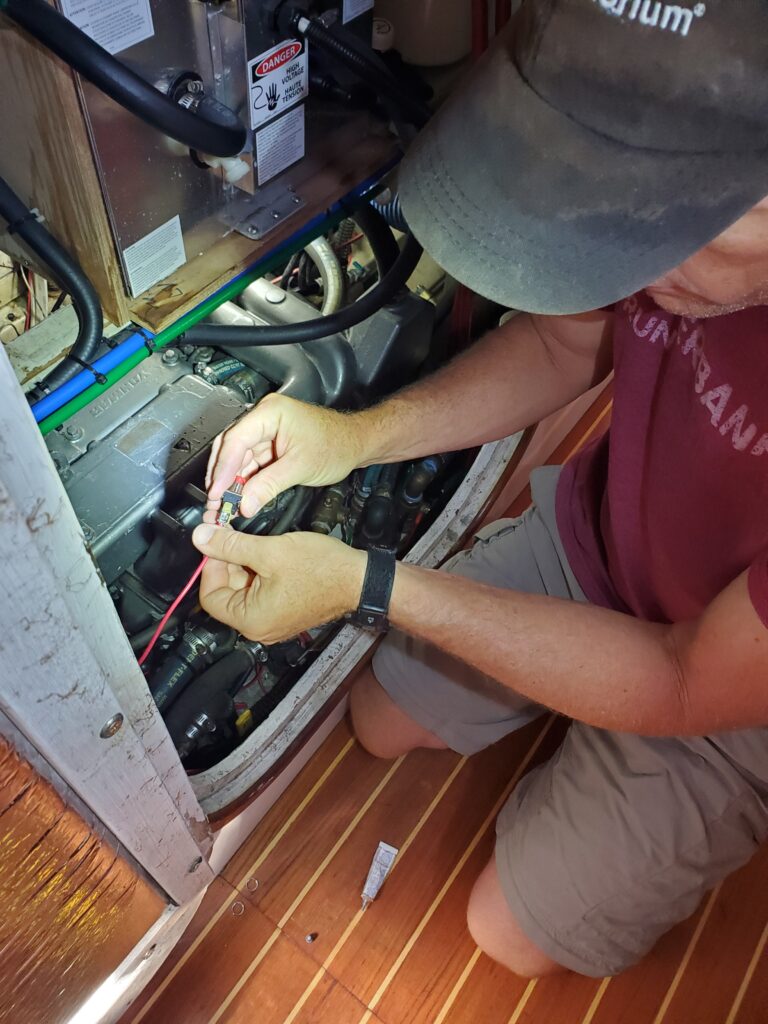 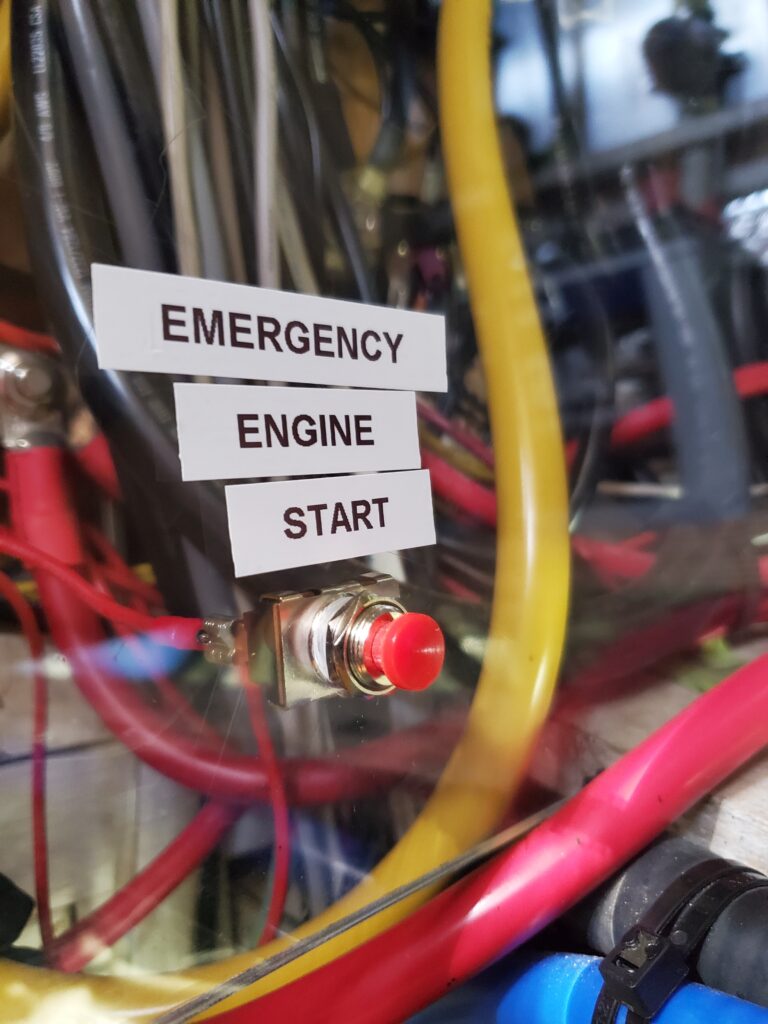 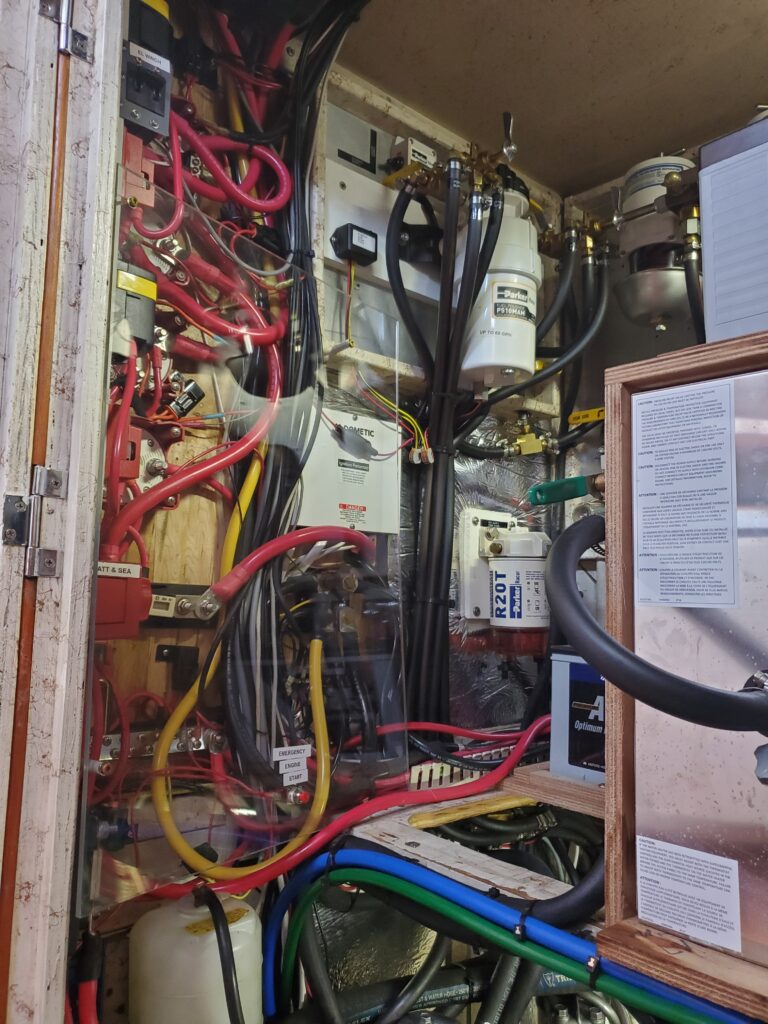 Project #2: install two antennae including running the wires through the boat. One is for our Iridium satellite device which allows us to use our phones as satellite phones. We can use the device as is with the tiny antenna but it requires taking the device outside in the cockpit where it could potentially get damaged or wet. If we install the big antenna we can keep the device right where it lives, plugged in on the nav table safe and sound, and we could even walk around and talk on the phone if we wanted. The other antenna is a cell phone booster. Our phones are our primary internet connection, and the cell signal often doesn’t quite make it out to where we are on the water. When we have cell signal we can use our phones as a hot spot to, for example, upload blog posts! When we don’t have cell signal, we have to use the Iridium satellite device (which has no internet connectivity), or use restaurant or marina wifi to use our phones and computers. We already bought the antenna kits complete with the mounts and hardware and instructions. First, we had to figure out where to put them. The instructions said up high and not near other antennas. We had the high part but they definitely will be near other antennae and wiring. Hopefully they will still work! The wires that we needed to string were large coax cables like what runs into a TV cable box. The space for both wires looked big enough for maybe a couple of twisty ties. It took several hours, a lot of foul language, and some chipping at fiberglass but finally, we succeeded! We got those big wires run from the top of the arch all the way to the nav station. Next we mounted the antennae and the booster box. I hope it will be worth the effort! 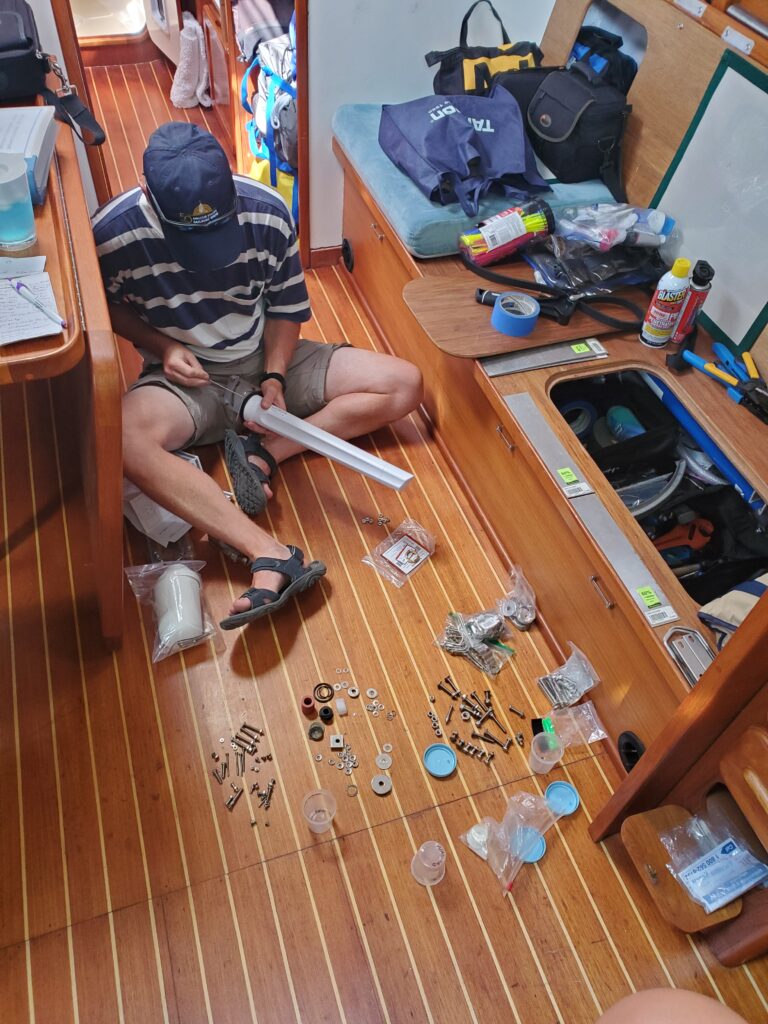 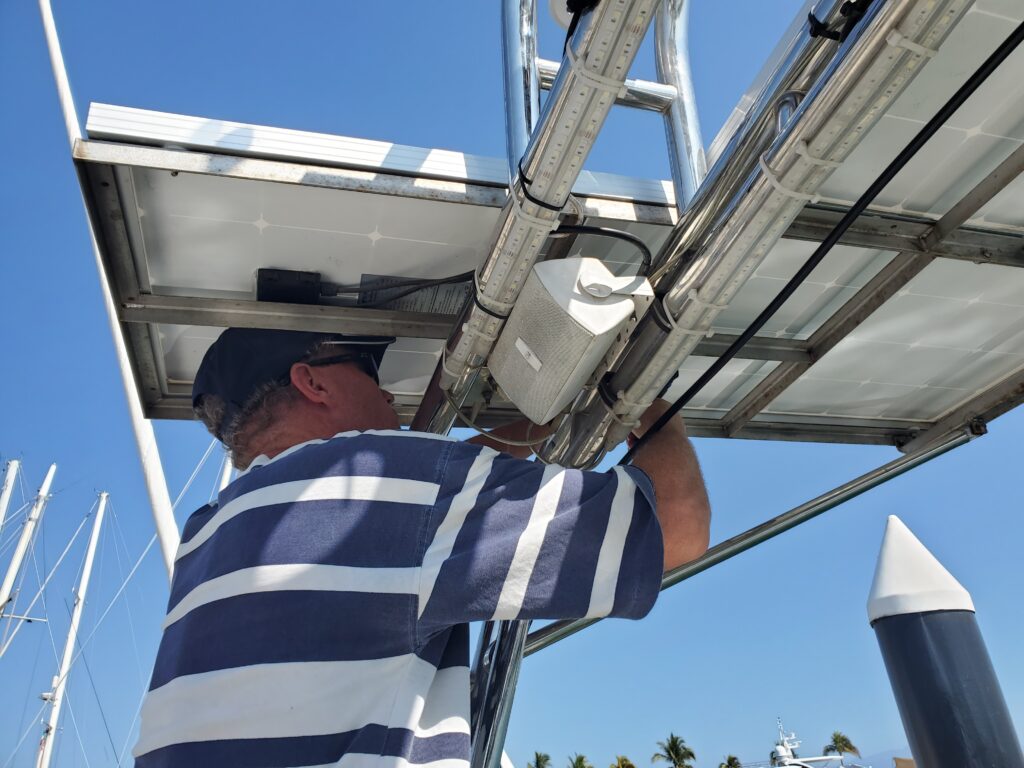 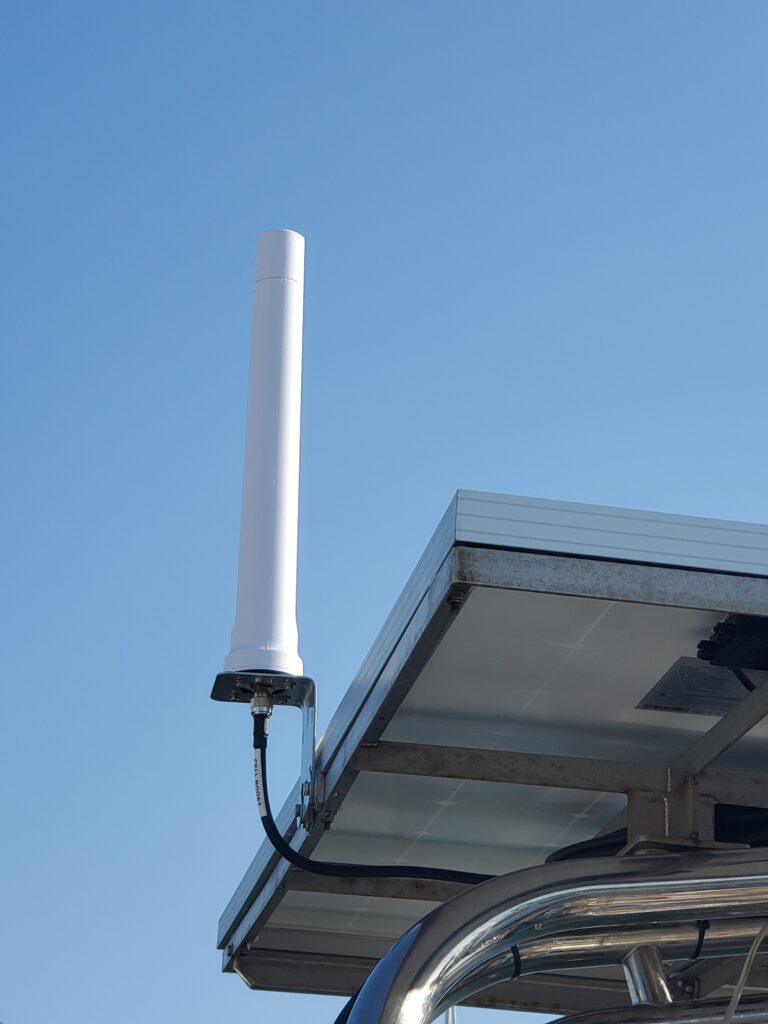 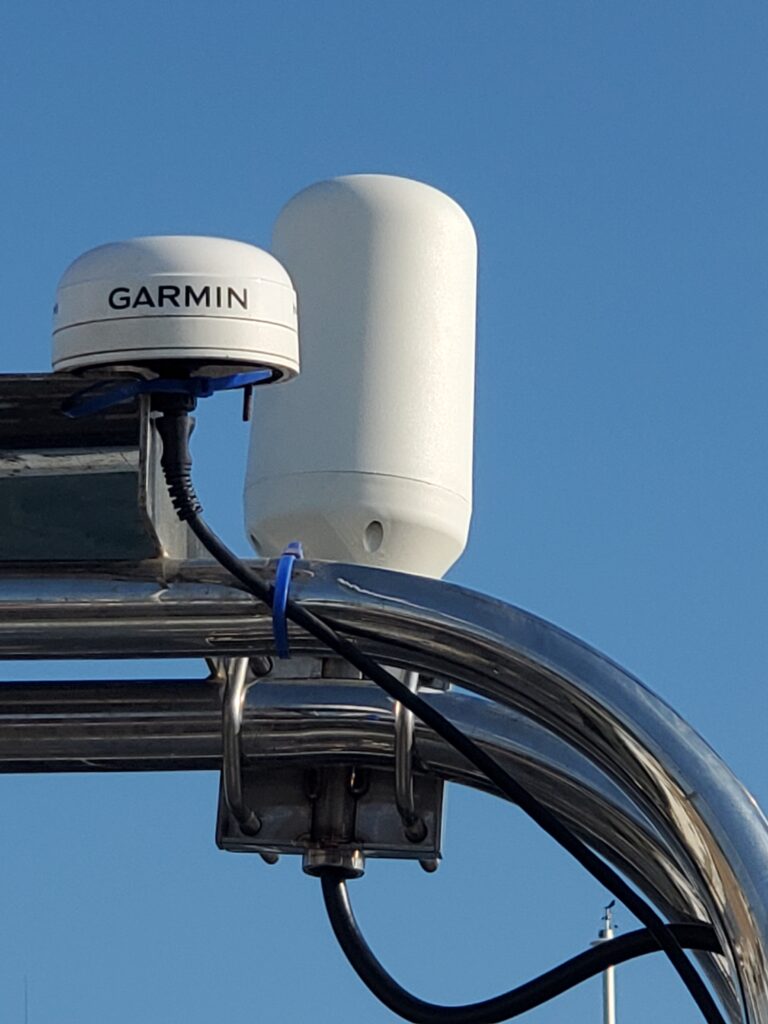 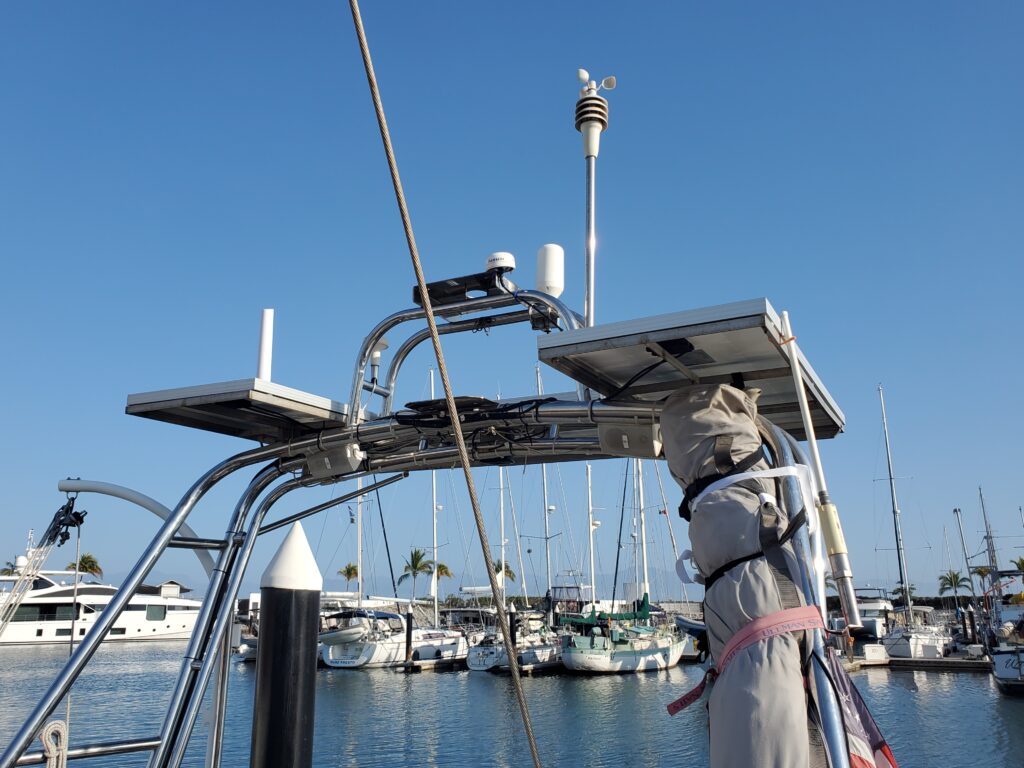 Project #3: Make sun shades. Shading the boat can decrease the inside temperature by 10-15 degrees! We are heading further south into hotter areas and we would love to be able to have sunshades. We already had all of the supplies for the project and had spent some time doodling the general plan. We started with some official measuring and drew out the blue print. We would make a “small” shade for the front of the boat back to the mast and a large piece from the mast back to the arch. The small piece measured 8 feet at the narrow end, 15 feet at the wide part, and 15 feet long. The big piece is roughly double that. The problem is that the shades are big, so the pieces of material are bigger than we can manage on the boat. It requires a large flat open space to measure, cut the material, and baste the seams with seam tape. We got a start on this big project by cutting the pieces to size on the large end dock, it will have to be continued elsewhere. Probably in several elsewheres! 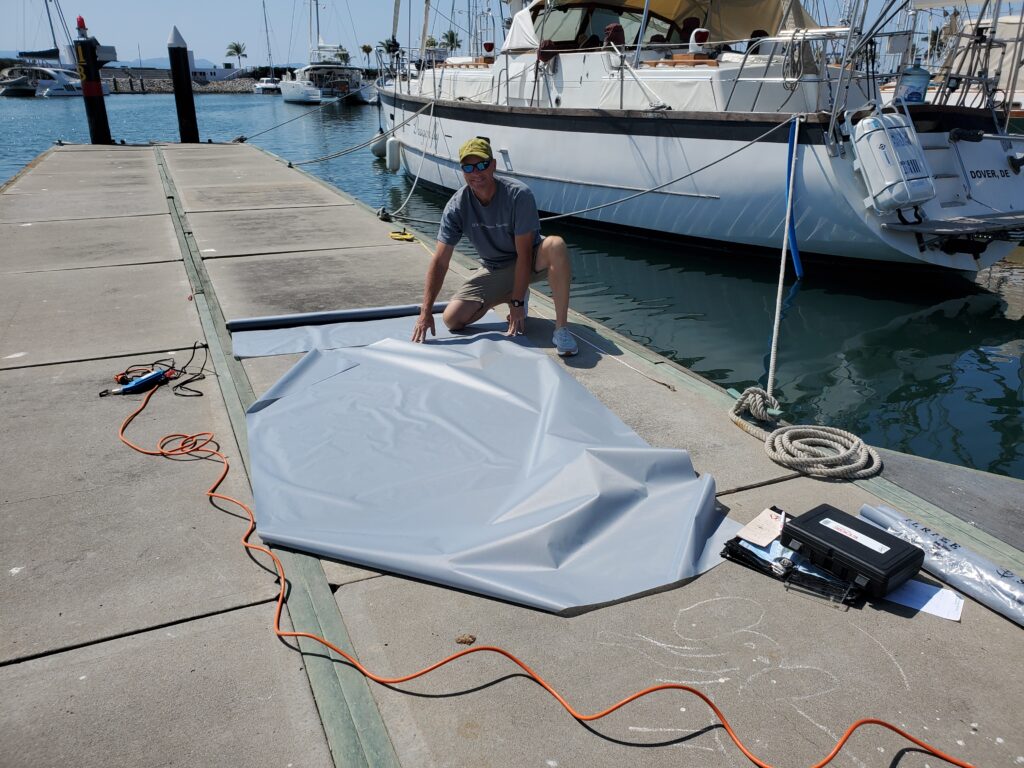 Project #4: Fix our speed transducer. We have a little gadget that fits into a two inch hole drilled through the bottom of the boat. It measures the water depth, water temperature, and our speed in the water. The water speed is measured by the turning of a little paddle wheel. It stopped turning so we can’t measure how fast we are moving over water. We still have our GPS derived speed over ground data so it has only been annoying rather than dangerous. A fellow cruiser told us we could just remove the transducer, slap the plug in the hole, clean off the wheel and replace the transducer. We told him we were afraid of making a two inch hole in the bottom of our boat. He said that he was nervous the first time he did it but there really is nothing to it. Oh boy, okay, let’s try it. We were at the dock in the marina and could scream for an emergency haul out at the working dock if it all went to shit. Good to have a “back up plan!” We draped towels over everything around the bilge opening where we had access to our transducer. We stopped short of wearing our snorkel masks. We were prepared for a fire hose stream of water. Bill unscrewed the transducer with one hand and held the plug in the other. I stood by with the flashlight and a free hand to help add pressure to the plug if needed. After a short discussion of whether to go on three or 1-2-3 then go…..here we go, we counted “one, two, three” and transducer out, gush of water in, plug in, wow! The water didn’t even hit the ceiling! We cleaned up the wheel then replaced it. Really, there was nothing to it. 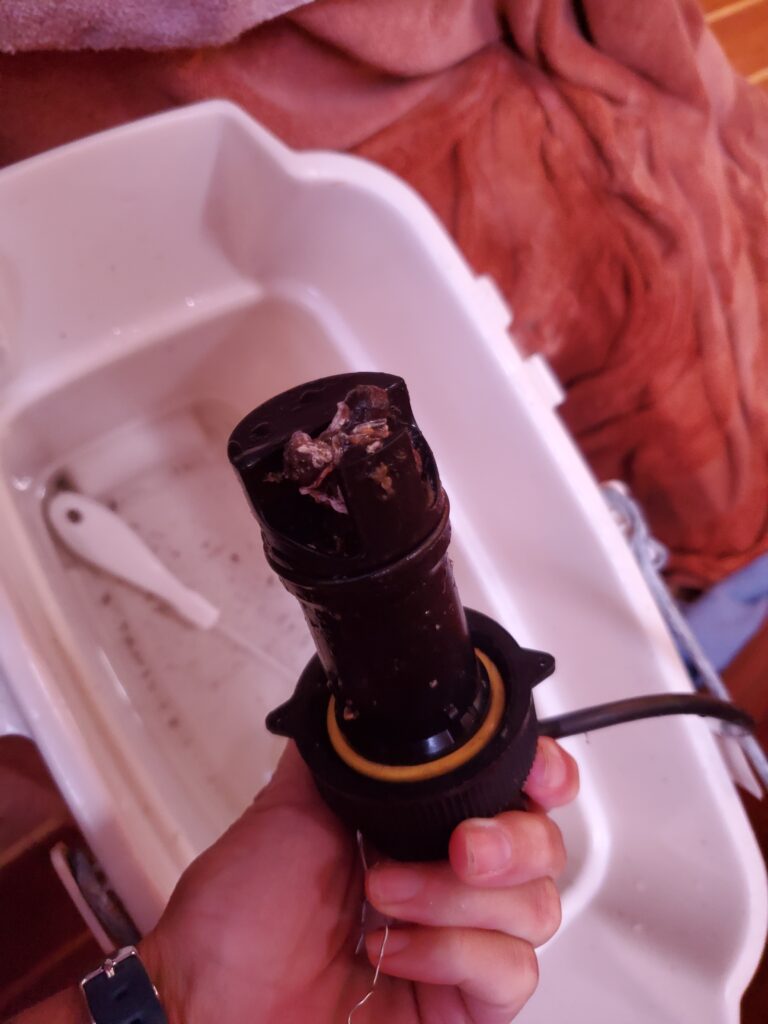 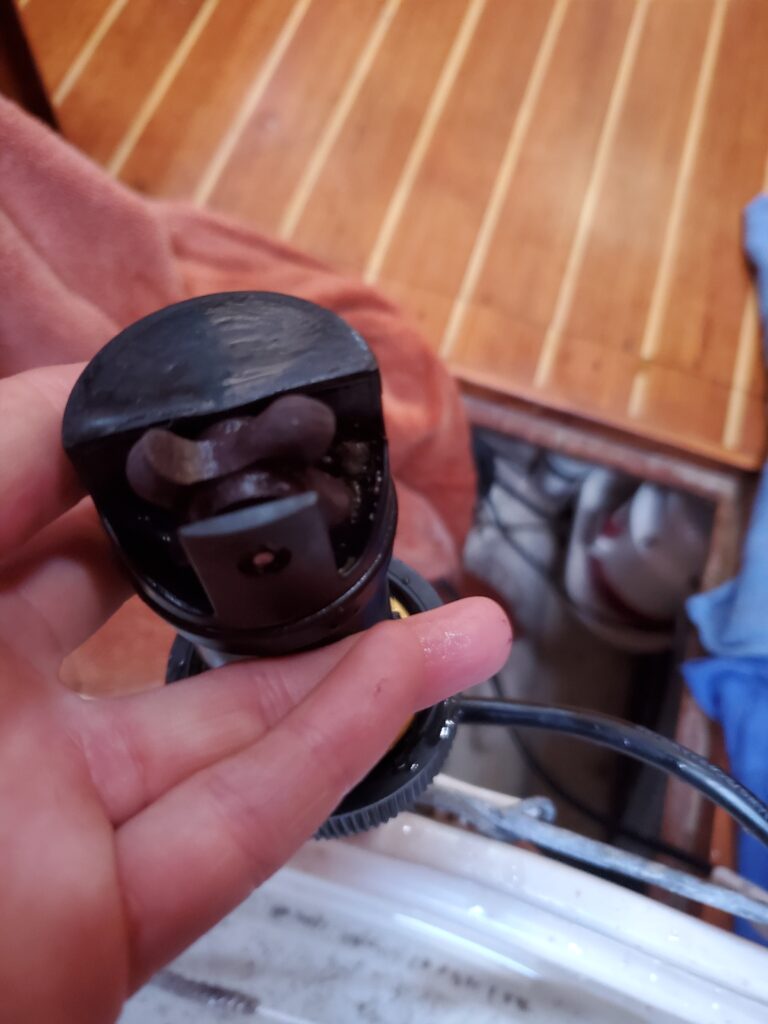 It took 6 days to do all of the work on the projects (including cleaning strainers and doing oil changes) and another day to put away all of the tools and clean up. Our wonderful fabulous Bucerias now-family took us to Costco for major provisioning. We bought about 3 months of staples. We needed three dock carts to get it all to the boat! It took another day to de-package it all and stow it. Suddenly it was March 6th. The weather was looking good to start our next leg of the journey. We were heading down the rest of the Mexican Pacific coast to Central America, and the time had come to go. 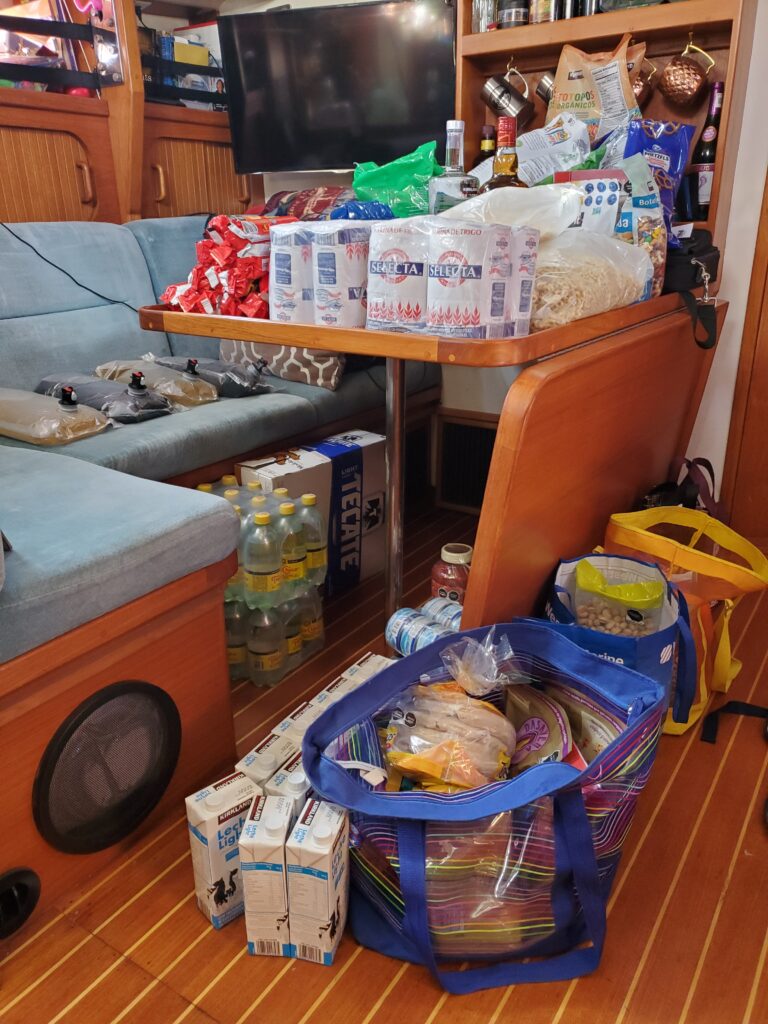