February 13th, after a slow, lazy, relaxed morning we set off from Marina Vallarta at the crack of noon for the short sail back to La Cruz. We put the sails up once we were out of the marina and safely away from the behemoth cruise ships. A gentle eight knot breeze carried us all the way back to the anchorage in La Cruz and we had the hook down by 2:30. It was Super Bowl Sunday and we had plans to go to a place called La Cascada to watch the big game! We went early before other gringos, who might have found out about the Super Bowl Party at the restaurant, took all the good seats. We walked to the edge of town where the sidewalk ended and took a right. We looked at our Google maps and where we were. It should be right here, where the heck is it? We looked up and about 50 feet above our heads was La Cascada. It was literally built into the cliff. One whole wall was the rock face of the cliff. Cool! We climbed up the steep stairs and were met by no less than four eager wait staff. They were ready for a crowd and we were first! We ordered drinks and appetizers and settled in. None of the TVs were on, hmmmm. None of the lights were on, hmmmmmm. An electrician showed up and started working. Oh Boy! Maybe we won’t see the game. Five minutes before game time the electric was on and patrons were applauding. It was a beautiful place to watch the game. Our Flathead/Bucerias friends joined us at halftime. Being Canadian they were not as interested in the game. As it turns out, most gringos around here are Canadian and not interested in the game, LOL! It was a fun day and we even had a rainbow over Banderas Bay! 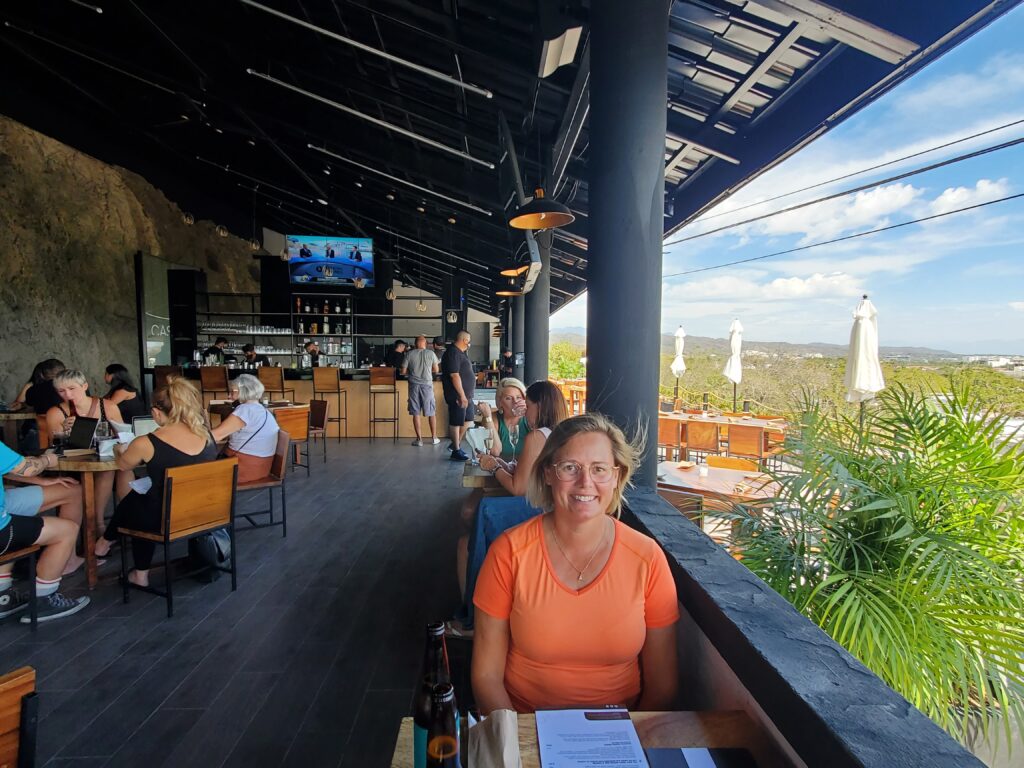 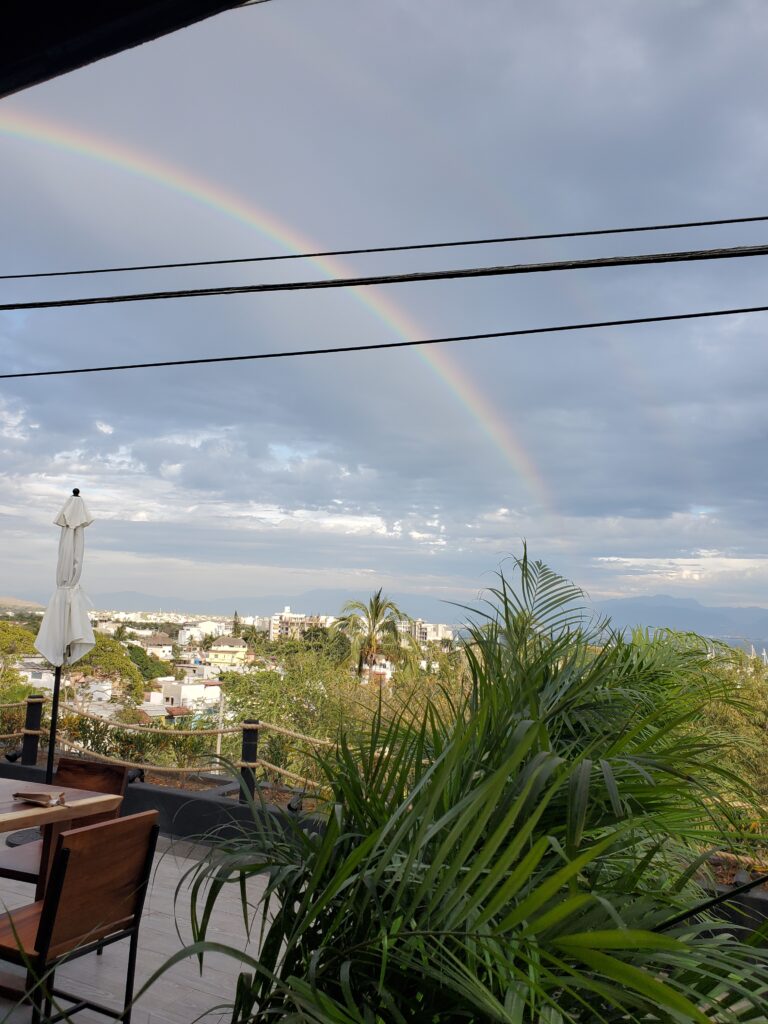 More Montana friends were due to arrive in a few days and we were woefully under stocked. We went provisioning at an American-sized grocery store where we could buy everything we needed and wanted in one place. The store was clean, well-lit, and organized. It had fresh produce, meats, wine, beer, everything all in one store. How nice! Also, our wonderful friends drove us in their car! No bicycles, no cart, no backpacks! Luxury! We did have to lug it all back to the boat but we weren’t even tired when we started that process so it was easy. We got everything unpackaged and stowed before dark, wow!

Mexicans seem to love Valentine’s Day or at least they do in La Cruz, Mexico. There was a shindig going on at our favorite bar, the Tree House, and of course our friends had reserved a table. Bill isn’t a big fan of Valentine’s Day. He feels like it is a holiday created by Hallmark just to make money. Not to mention the added pressure on a relationship if the wrong gift is bought or worse forgotten. Maybe he has a point. I didn’t have to twist Bills arm at all though to go to the bar with live music and a bunch of friends. In fact, he was looking forward to the event as much as I was! We got gussied up and went out to meet up with our Canadian friends, and joining us at the last minute were our friends from s/v Maya too! The place looked wonderful and we had a great time. Music, food, and friends- this Valentine’s Day was fun with no strings attached! 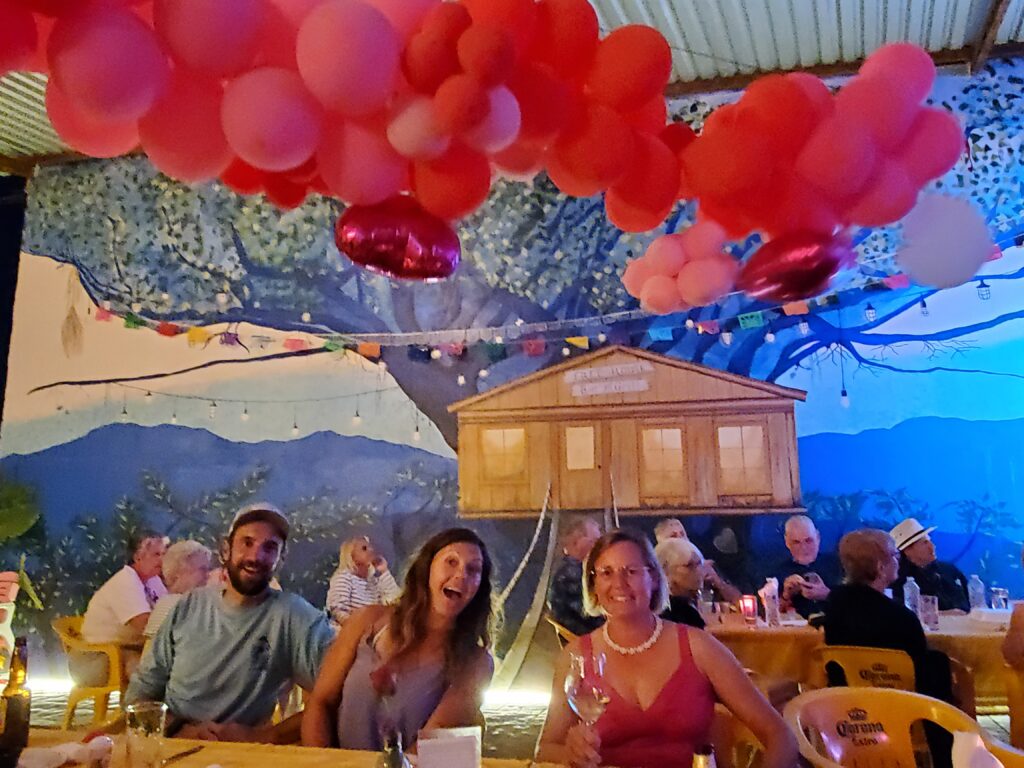 February 15, our Montana friends are coming! We had a cruise planned to go north to some of the places that we had wanted to see but had skipped so we could get to Banderas Bay in time to catch the Flathead Lake South crew while they were in town. Now was our chance to go and it will be fun to share the adventure. Our friends from s/v Calico arrived in the early afternoon ready to vacation! We started with a late lunch of appetizers at the marina restaurant and talked and talked until dinner time. We met up with our Bucerias gang and went for dinner at a fabulous German restaurant. What a surprise to find in small-town Mexico! The owner, a German woman, was the chef, server, and bartender. Actually, I think there was one other person helping cook, but still! The food was authentic and delicious. We all waddled home, ready to hit the hay. 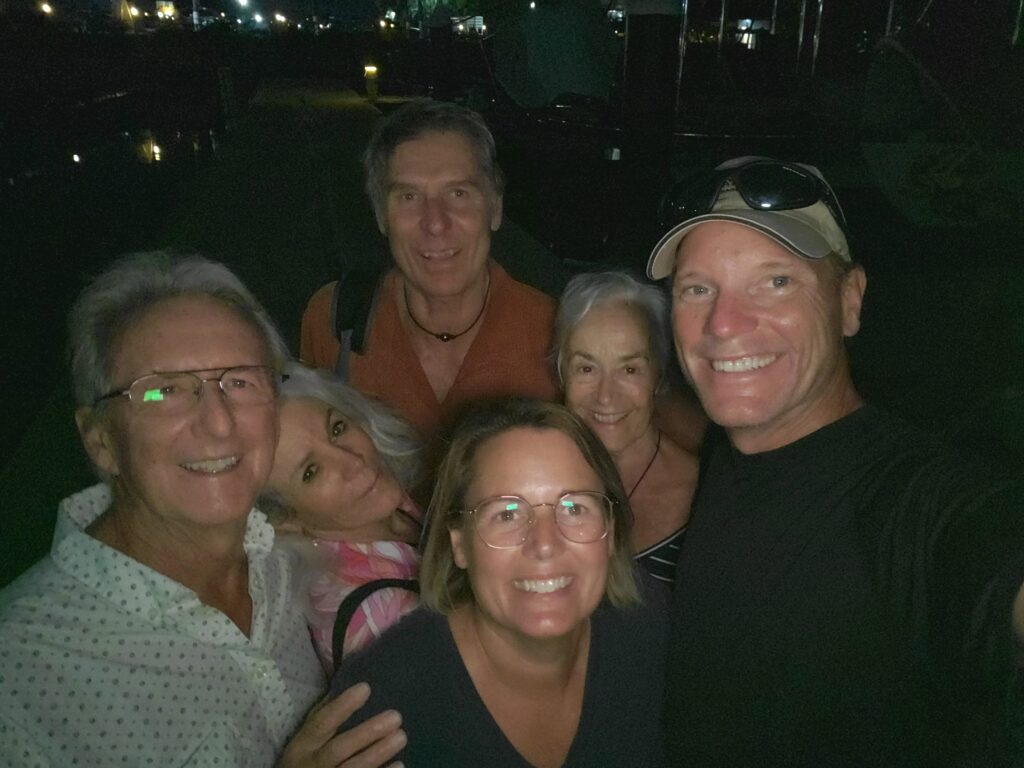 Feb 16 we were up early and off the dock at 8:10 to go to Jaltemba, a little beach town about seven hours away. The weather was beautiful and as always around the bay, mother nature put on a show. There were whales, dolphins, and turtles galore! At 3:00 we were anchored off the little island just off the beach town of Jaltemba. The water was crystal clear and warm. Yay for no red tide! After a swim, we took Pomp into the beach. Palapa restaurants lined the beach and spilled out onto the sand. Families were occupying long tables pushed together so that everyone had a chair. Vendors were pushing various carts loaded with all kinds of things to buy, from blow up pool toys to fish on a stick. We wandered down the beach and back through town just soaking in the scene. We made it back to Saca-g in time to see a very nice sunset. 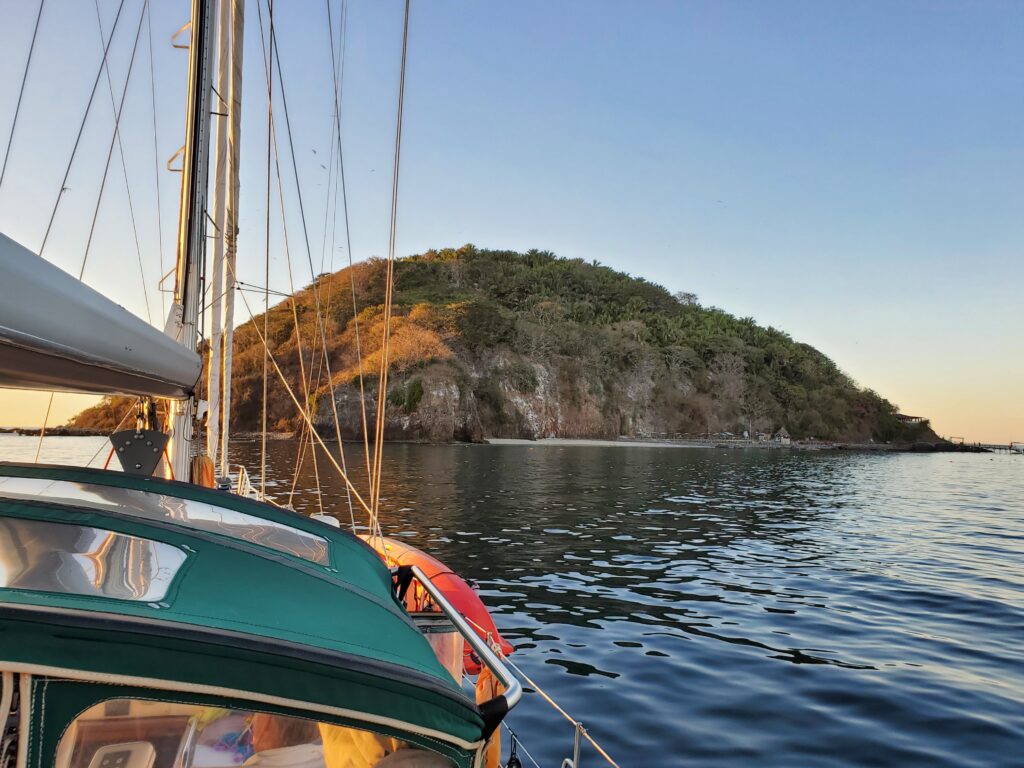 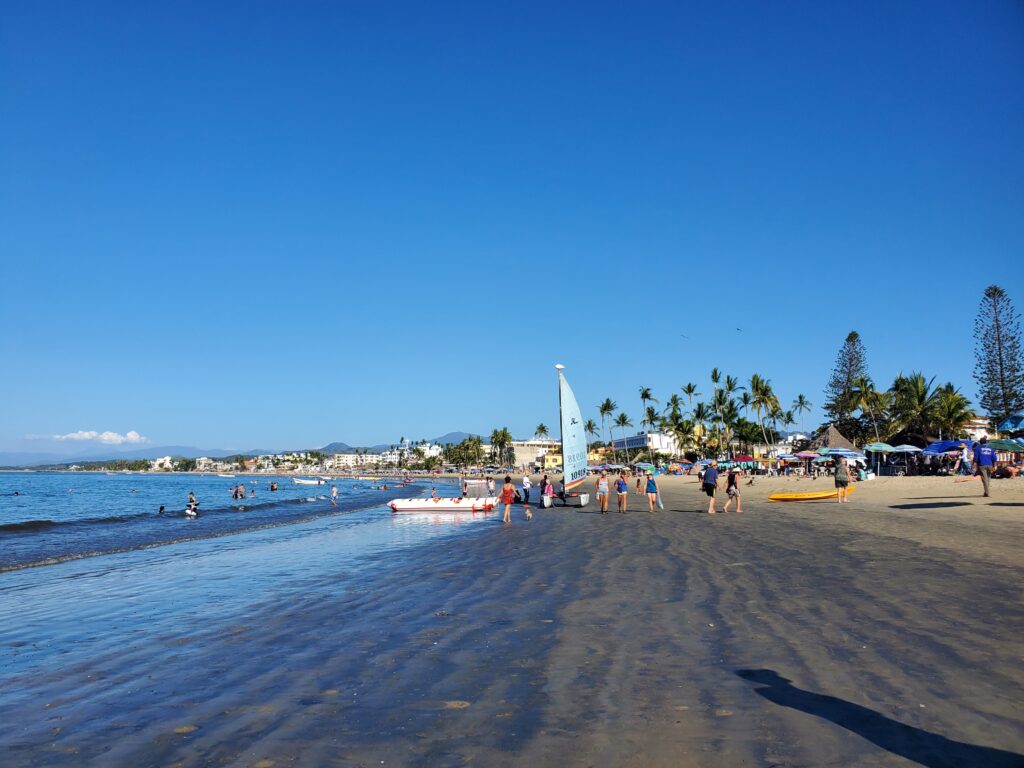 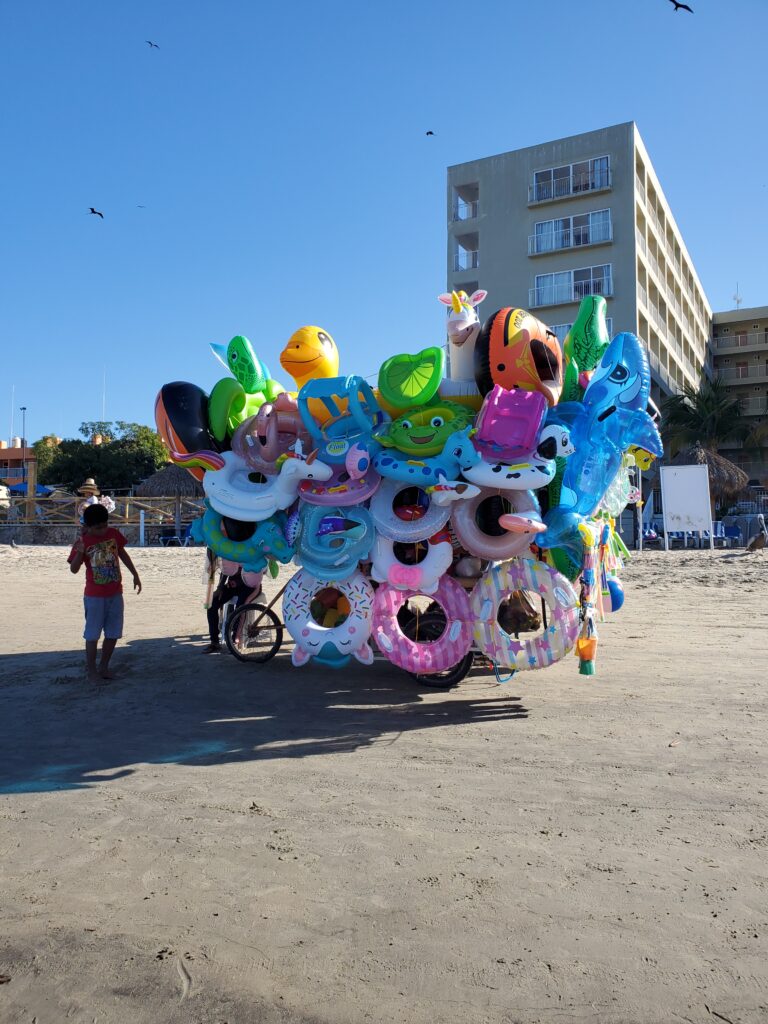 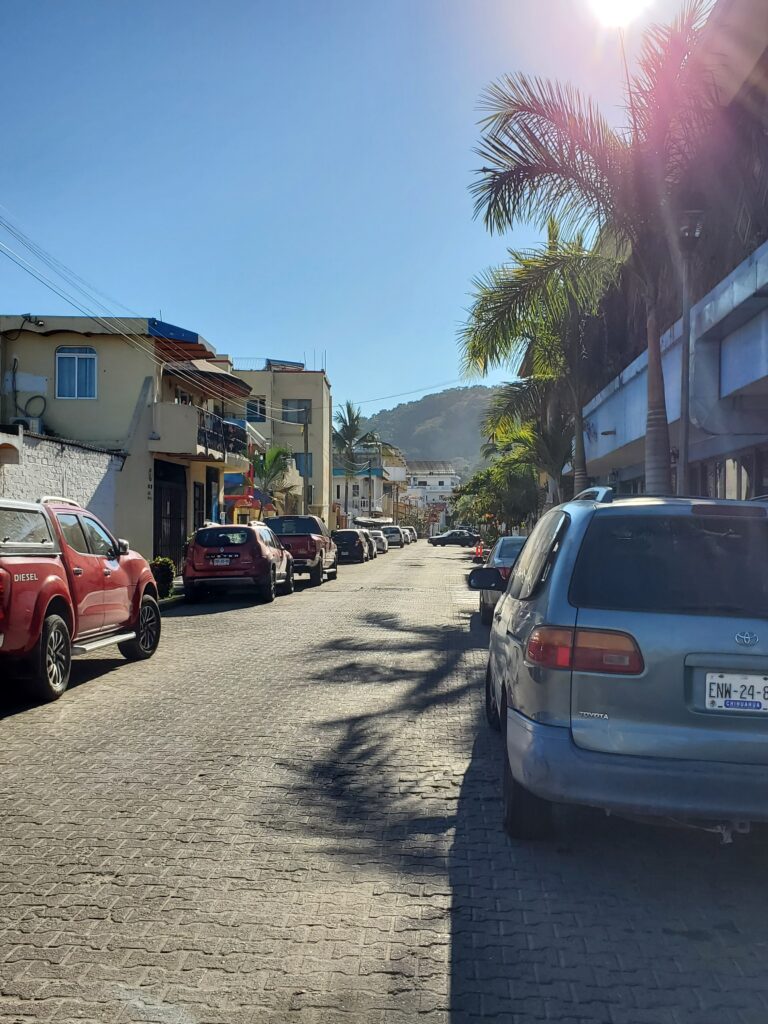 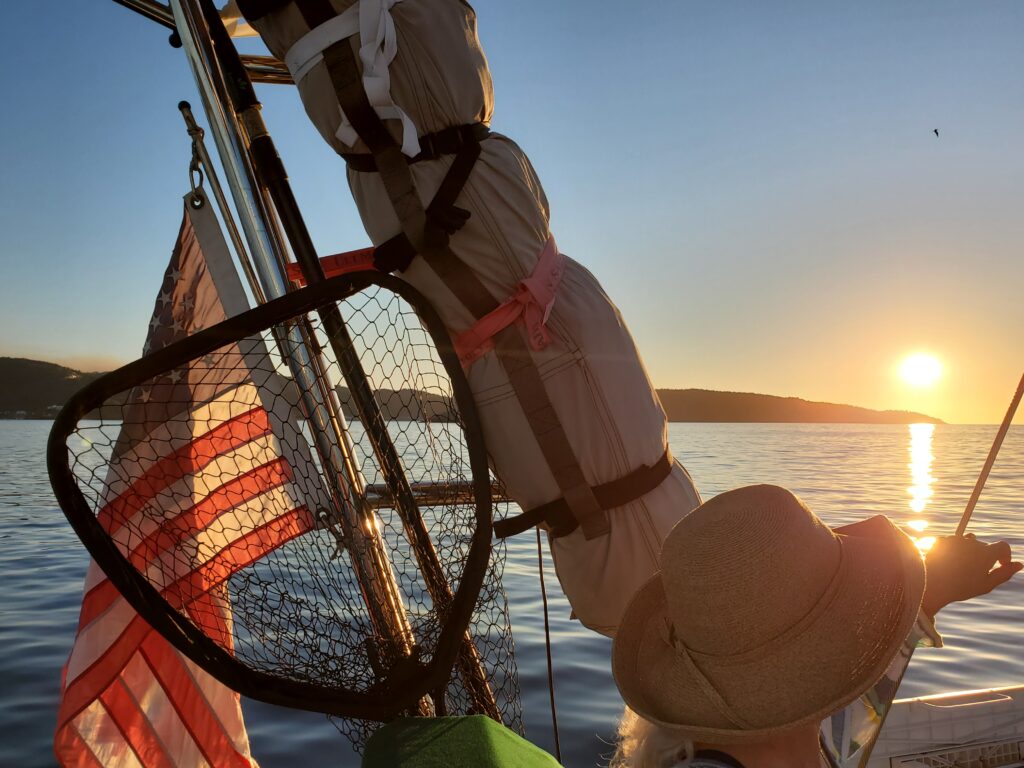 Feb 17, 8:00am the anchor was up and we were headed to Matanchen bay just outside of San Blas, MX about 5 hours further north. The weather was clear and calm which meant flat seas, which was nice but no sailing, bummer. We did manage to catch a fish on the way! A baby Sierra Mackerel. Why that little guy bit on a lure almost as big as he was is a mystery. We threw the pretty little fish back to grow-up. We are terrible fishermen, we rarely catch anything so even a small catch is something to talk about! We arrived at Matanchen bay at about 12:30 to find that there were only three other boats in the big bay that could easily hold a hundred. We picked a spot and had anchor down by lunch time. All the guidebooks warned about the biting noseeums, “Jejenes” in Spanish. We planned to stay two nights here so we anchored well off the beach to decrease the number of bugs that could make it out to the boat. After lunch, we went into the beach with Pomp to check things out. The waiter at the little beach restaurant flagged us over. After we all had a beer, he helped us get a taxi into town. He promised to watch the dinghy for us, and we promised to return for dinner. 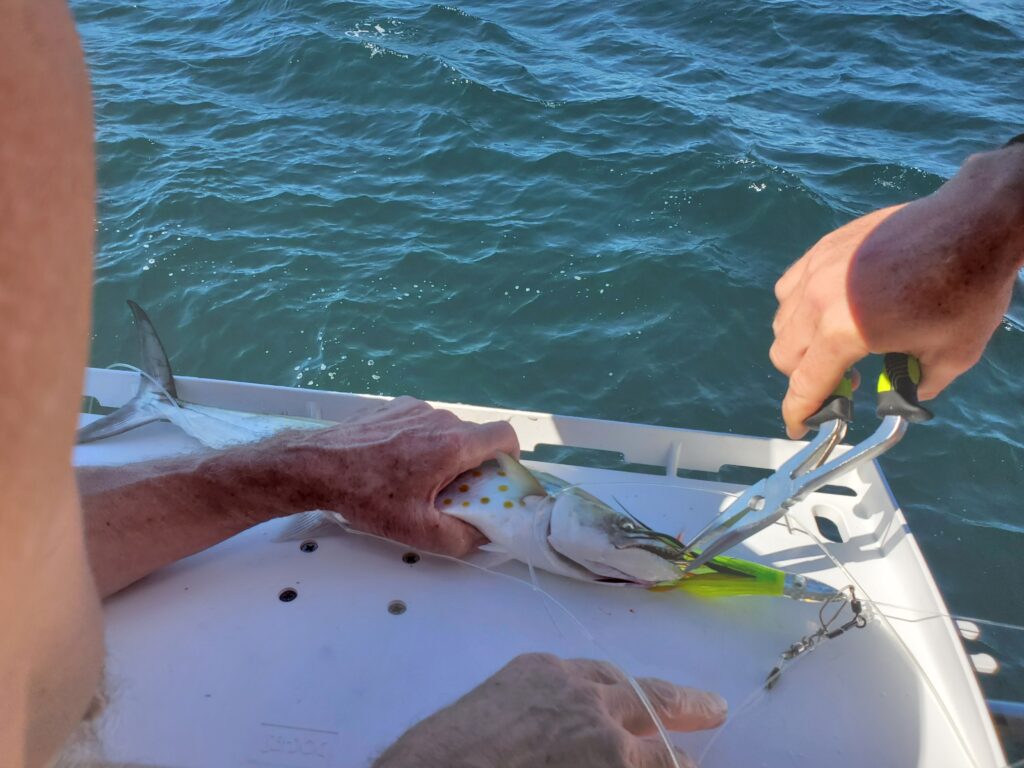 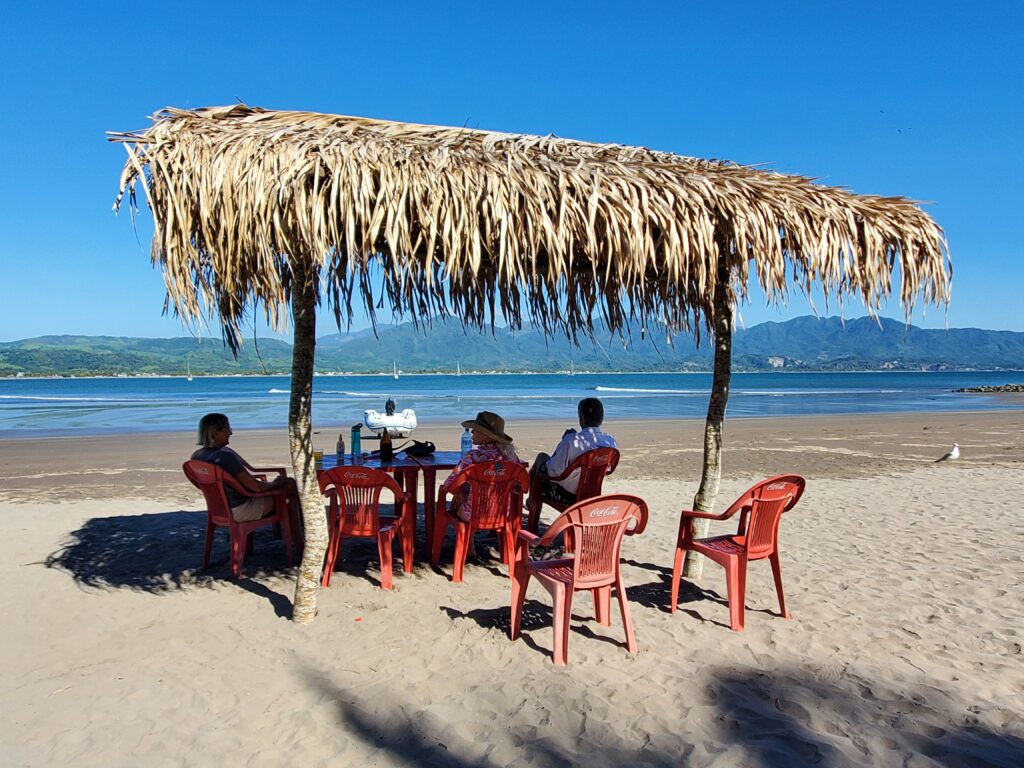 The taxi driver not only took us into town but also made sure we saw all of the historical sites. He even paid admission from his own pocket. He waited for us while we looked at the crocodiles, walked around the fort, the church ruins, the town center, etc. snapping photos and trying to decipher the informational signs which were in Spanish, of course. We had plans of going on the jungle tour in the morning and our driver pointed out where we should go to buy tickets and catch the boat. We could easily walk there from the beach! About 5pm we returned to the beach and to the noseeums like crazy! Our helpful dinghy watcher/server brought Off and a pan of smoking coconut husks which helped some, but all of us were a little bit miserable. We felt obligated to order some food and beverages to support his little restaurant and we suffered through. Tomorrow I am wearing my bug suit! 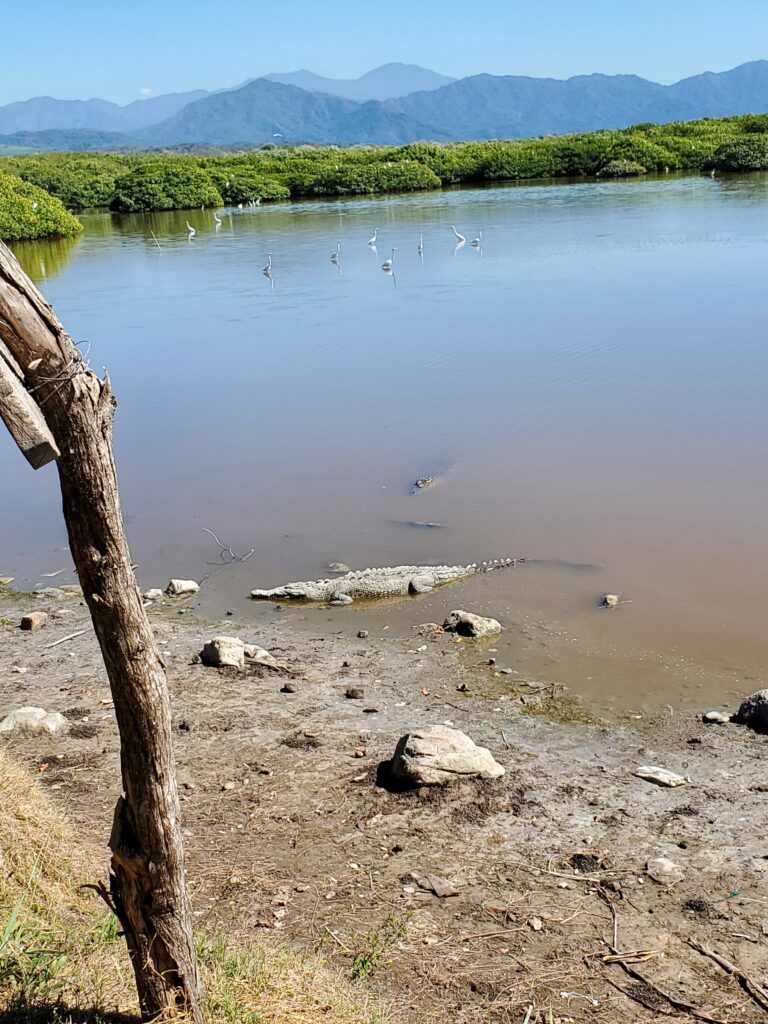 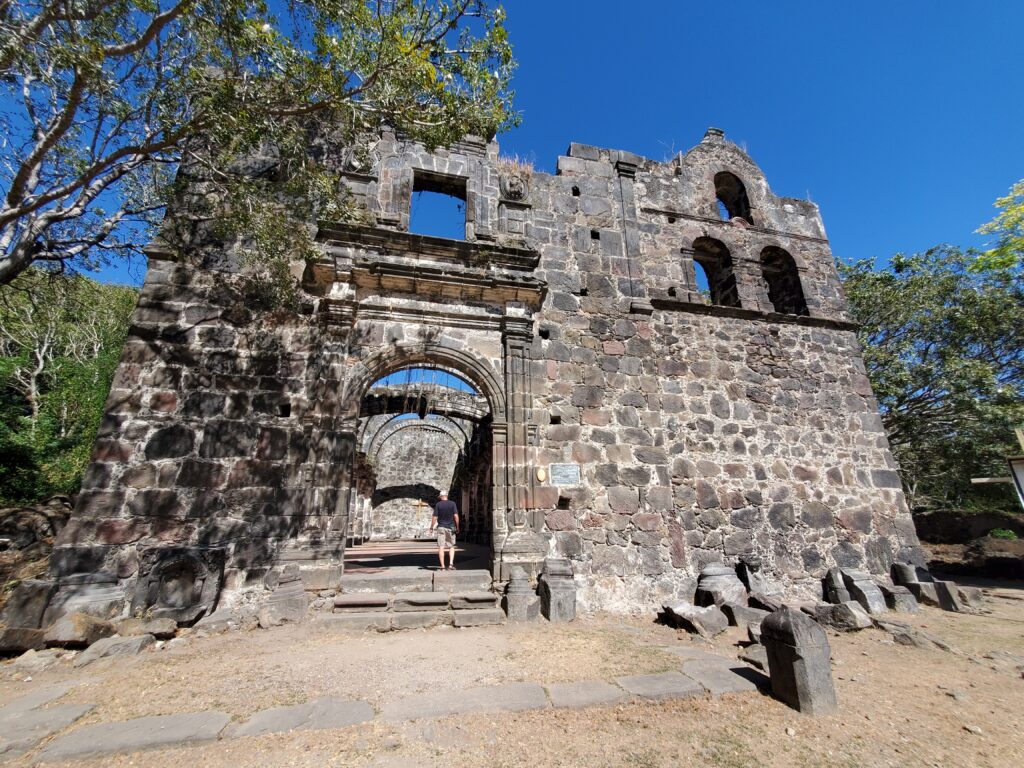 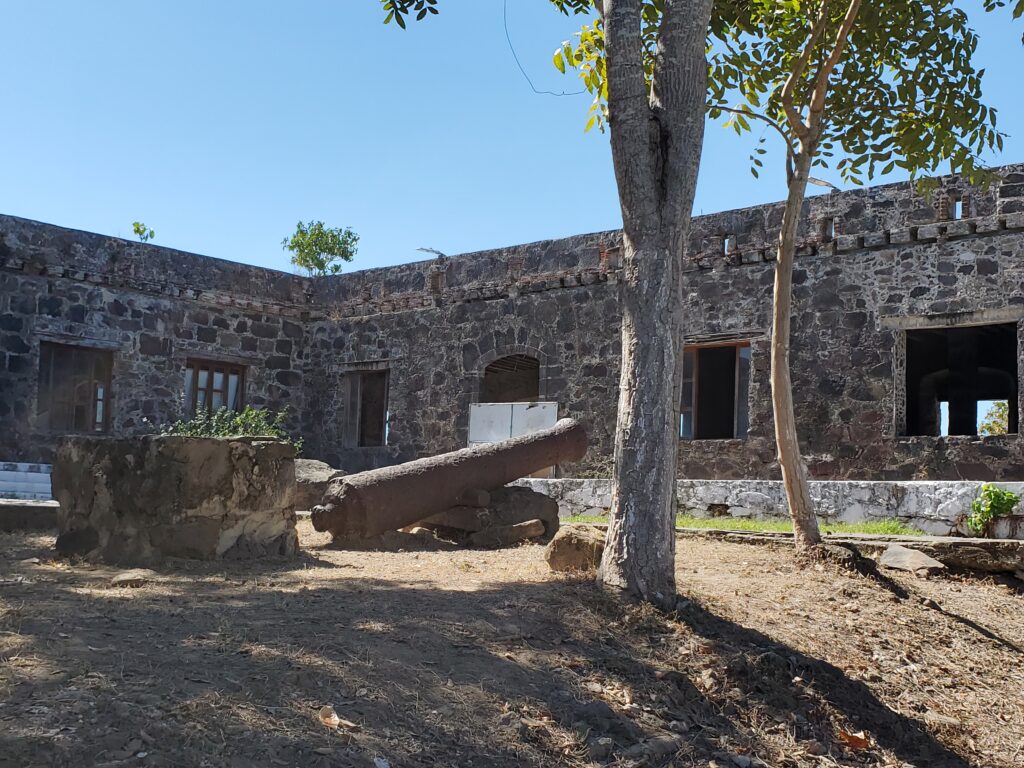 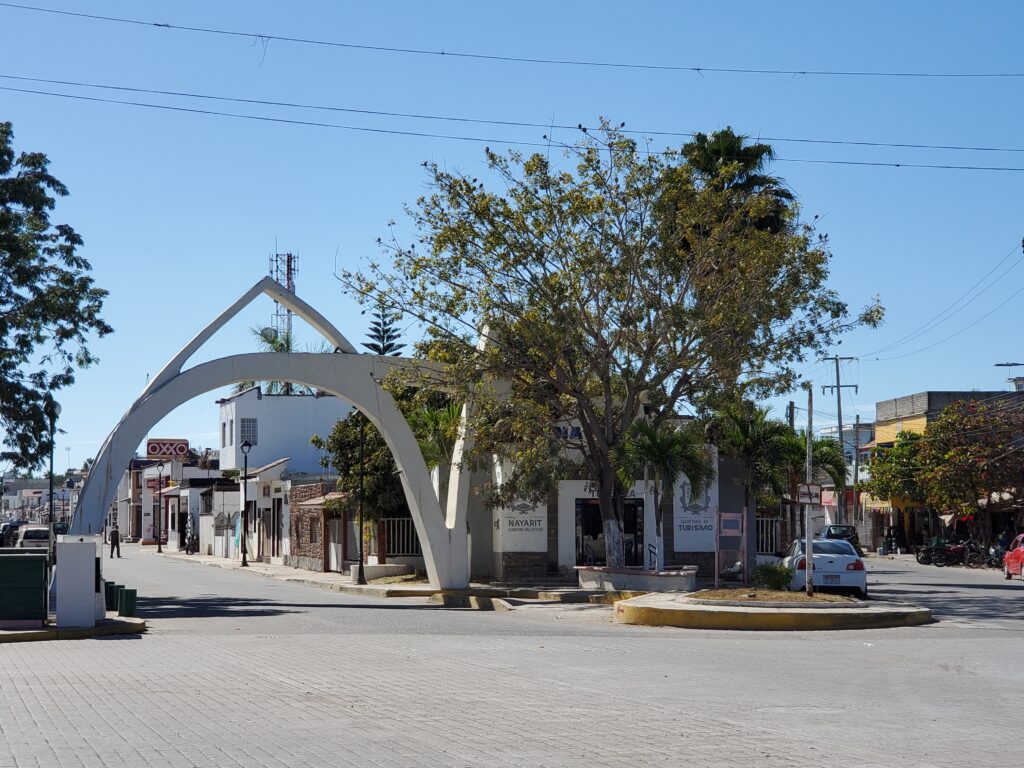 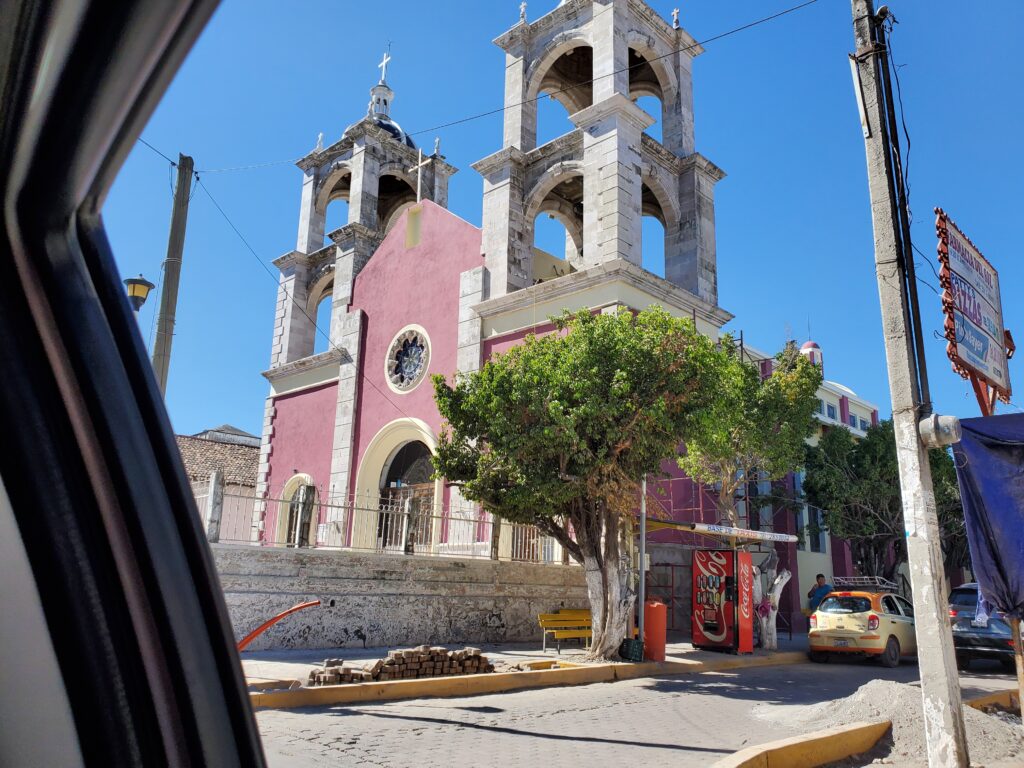 Feb 18, time for the Jungle Cruise with our friends on Tits Pierre! Bill and I dressed up in our bug suits consisting of close weave pants with elastic at the ankle and a shirt with a hood and netting. We pulled the suits on over our normal cloths. As we walked the half mile up the dirt road to the tour, the locals pointed and smiled (maybe laughing a little) at us nodding “Bueno!” The tour was great and I didn’t get a single bug bite! We set off through the mangroves in an open panga stopping to gawk at crocodiles, birds, and flowers. After about two hours we came to a swimming hole complete with a bar and a rope swing. The water came from a giant spring in the ground and was crystal clear. Our guide pointed out the crocodile fence making it safe to swim. After closely inspecting the area and not seeing any crocs, we decided it was safe. We all participated in the rope swing, why not?! The return trip was much faster. In about 45 minutes we were back at the docks and hungry for lunch. We headed back down the dirt road which took us back to the beach palapas. We chose one that smelled like grilled fish, yum! After lunch, we hugged our friends on Tits Pierre good-bye. We likely won’t see them again. They are staying in Mexico for the summer and we are heading south and through the Panama Canal. It is the hardest thing about this cruising life, saying good bye. 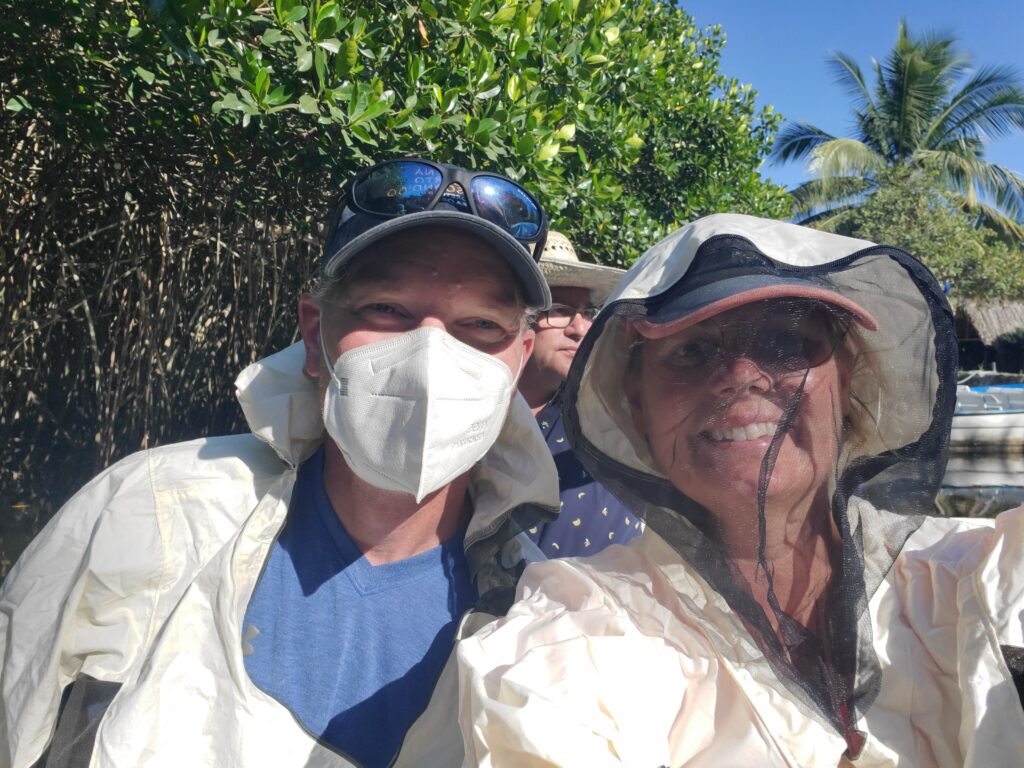 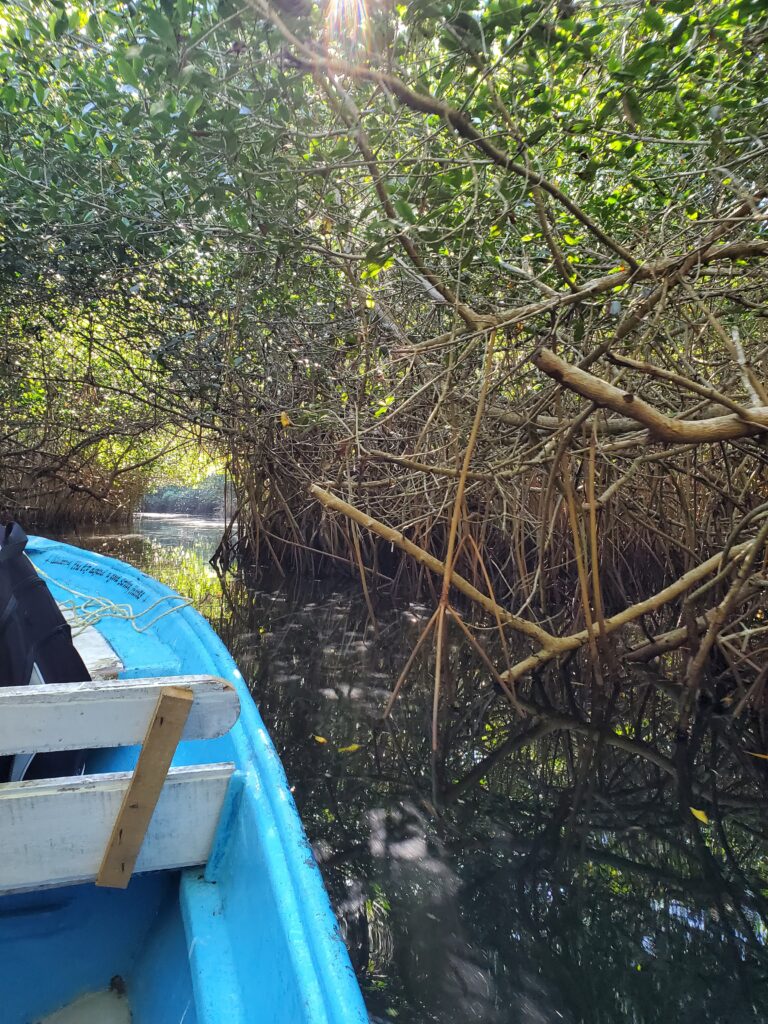 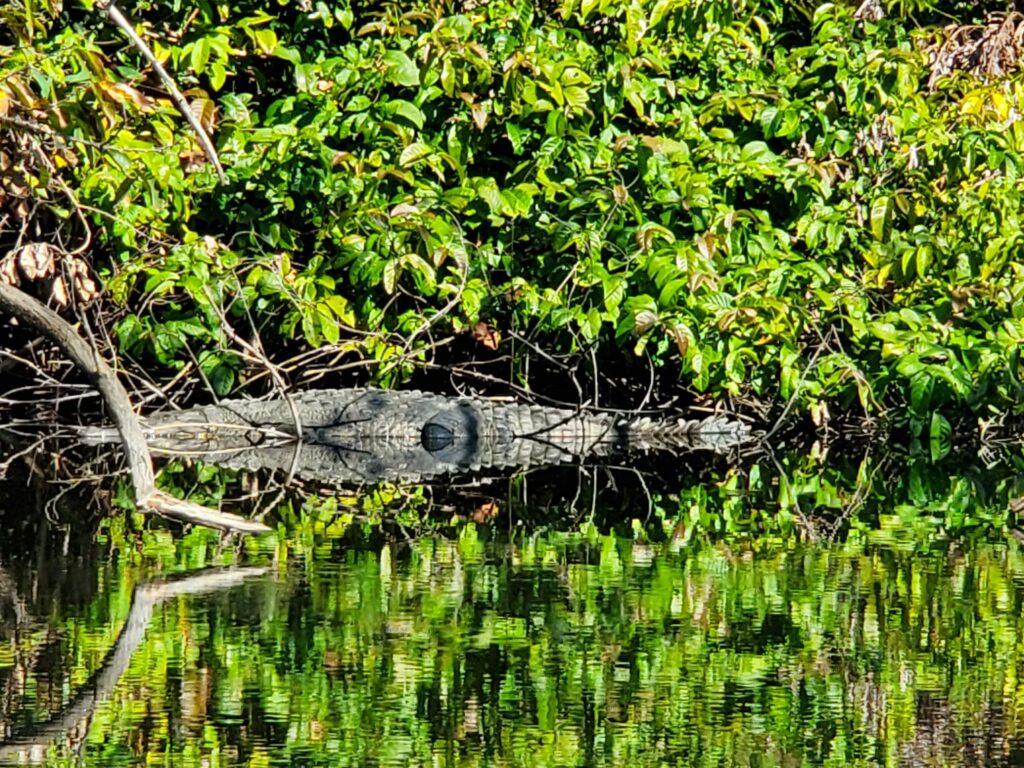 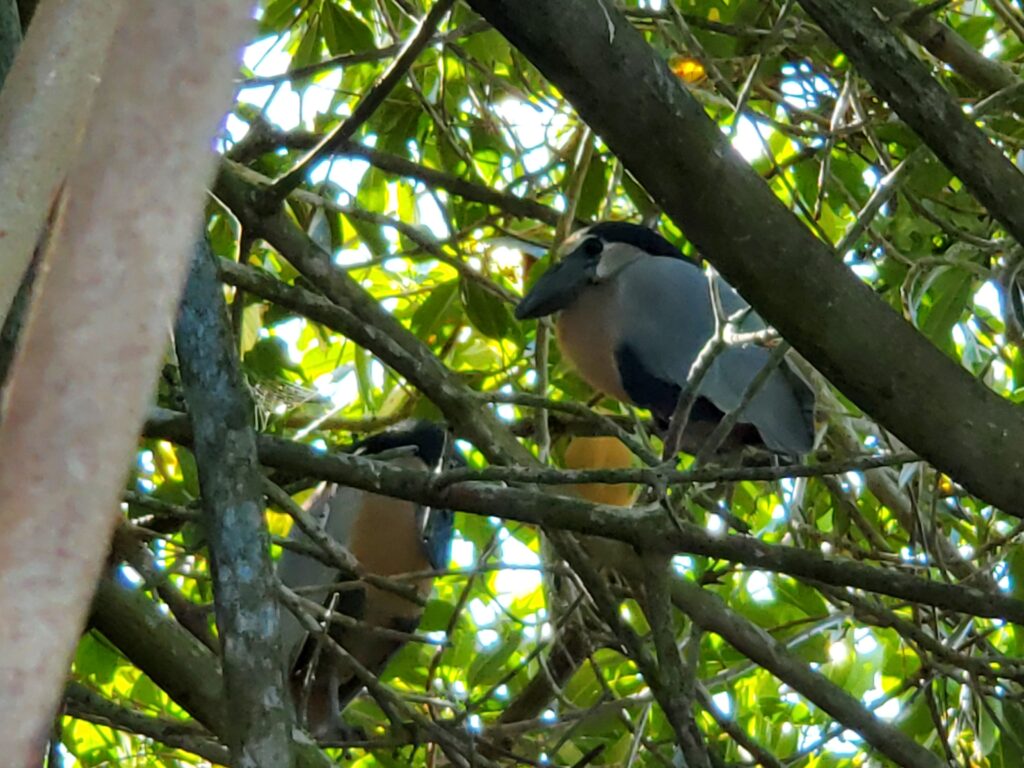 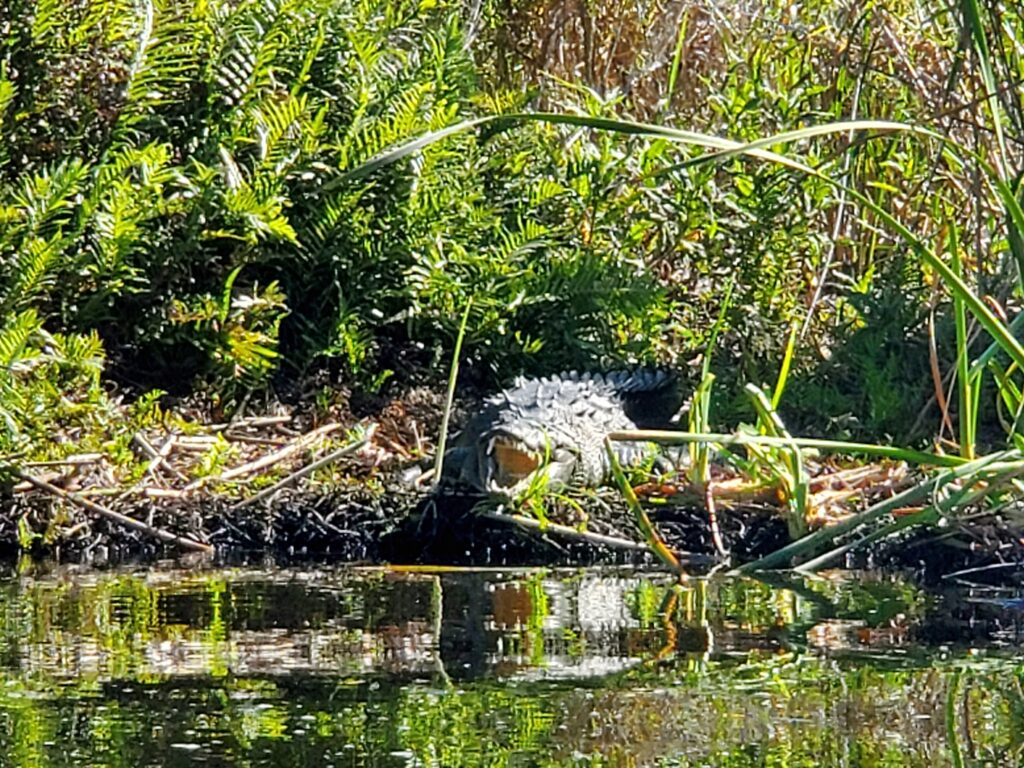 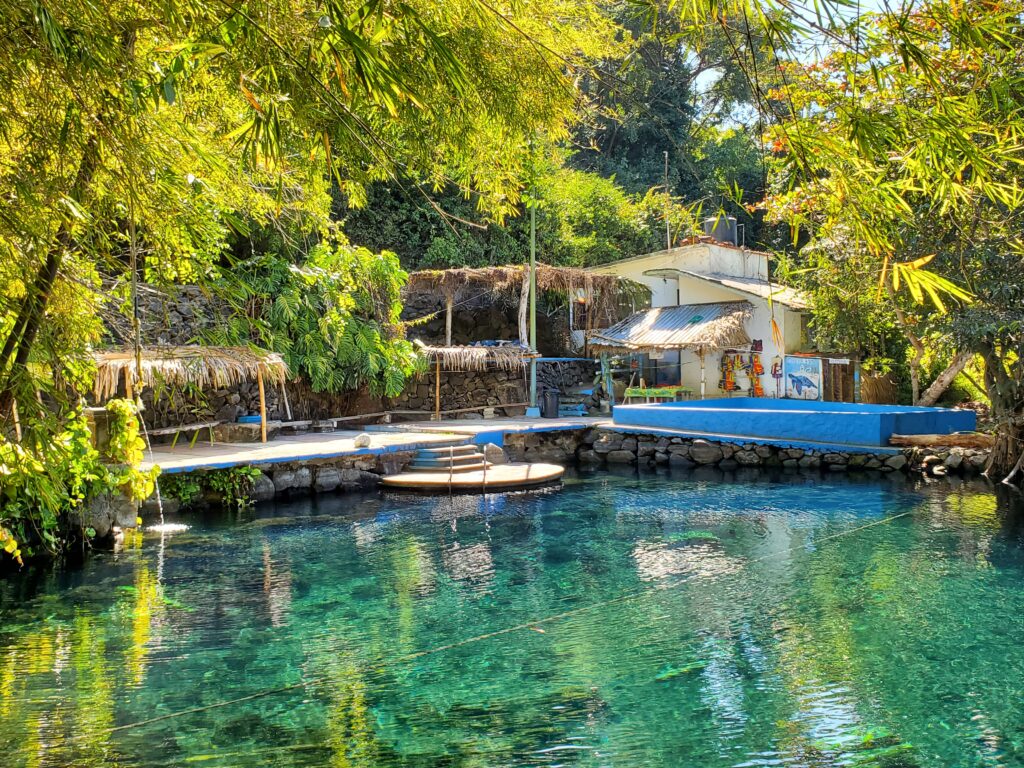 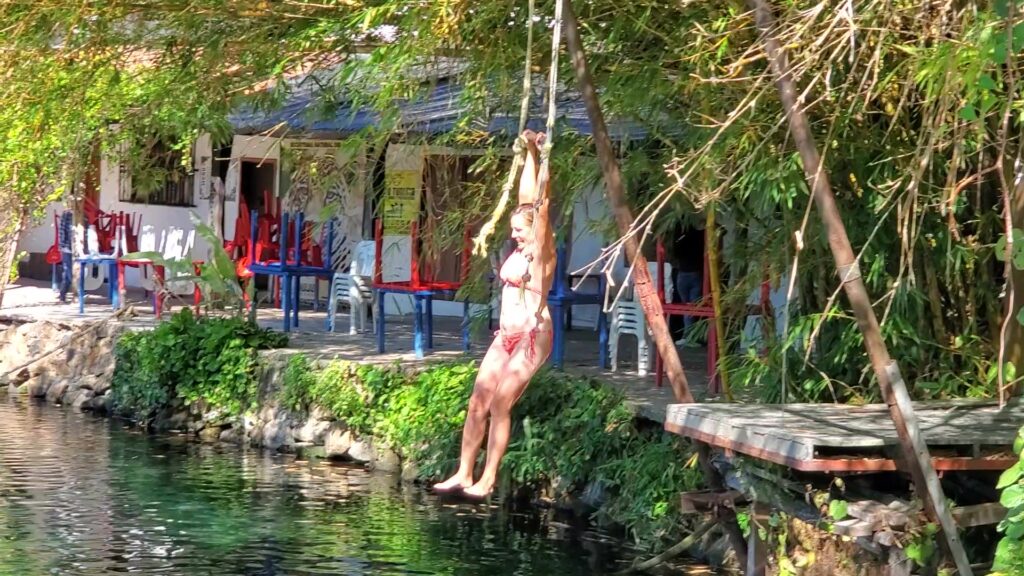 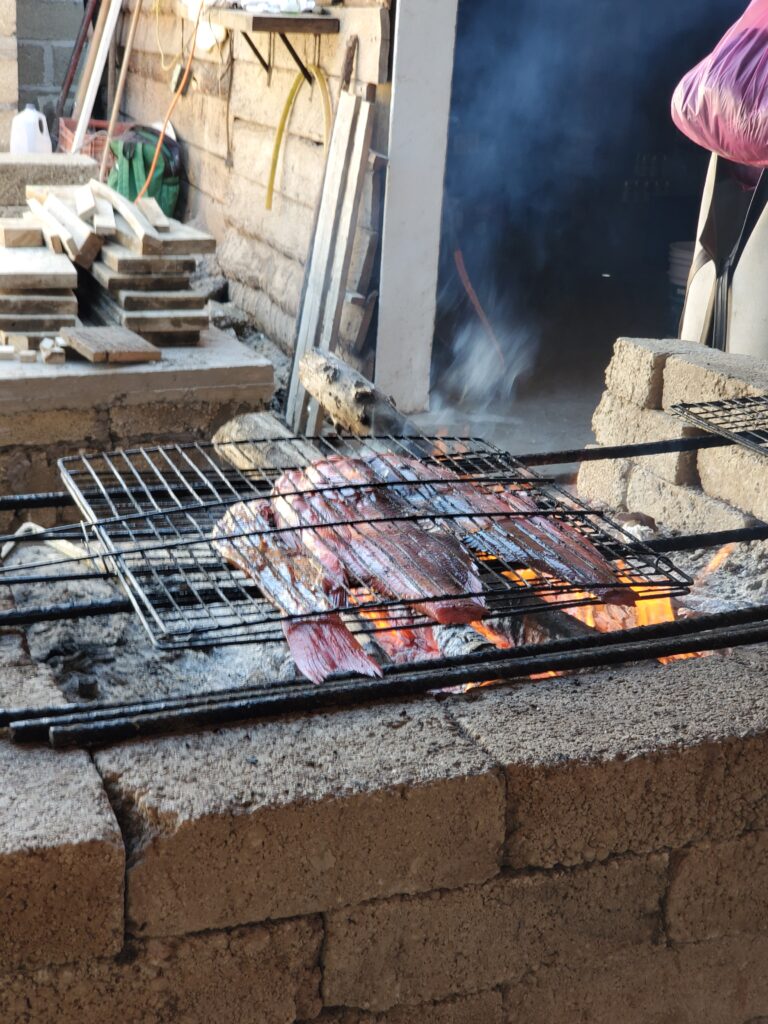 Feb 19, we took our time in the morning and set off at 11:00 to go south to Chacala, another little beach town. The weather was beautiful again, sunny and flat calm. We saw a big ray and more turtles along the way. We anchored with bow and stern anchors to keep Sacagawea pointing into the swell. We all planned to dive in until we looked into the clear water and saw millions of small jellyfish. They were in layers as far down as I could focus and as far out as I could see. No thanks! Instead, we took Pomp into the beach and joined the Saturday party scene. We saw a lifeguard and inquired about the jelly fish. He indicated that they don’t sting and it was safe to swim. A lot of other people were swimming but still, no thanks! Our friend did though and said it was weird. With every stroke his arms brushed by the jelly fish, “Bloop boop boop boop, Bloop boop boop boop, Bloop bopp bopp bopp.” I will swim another time. 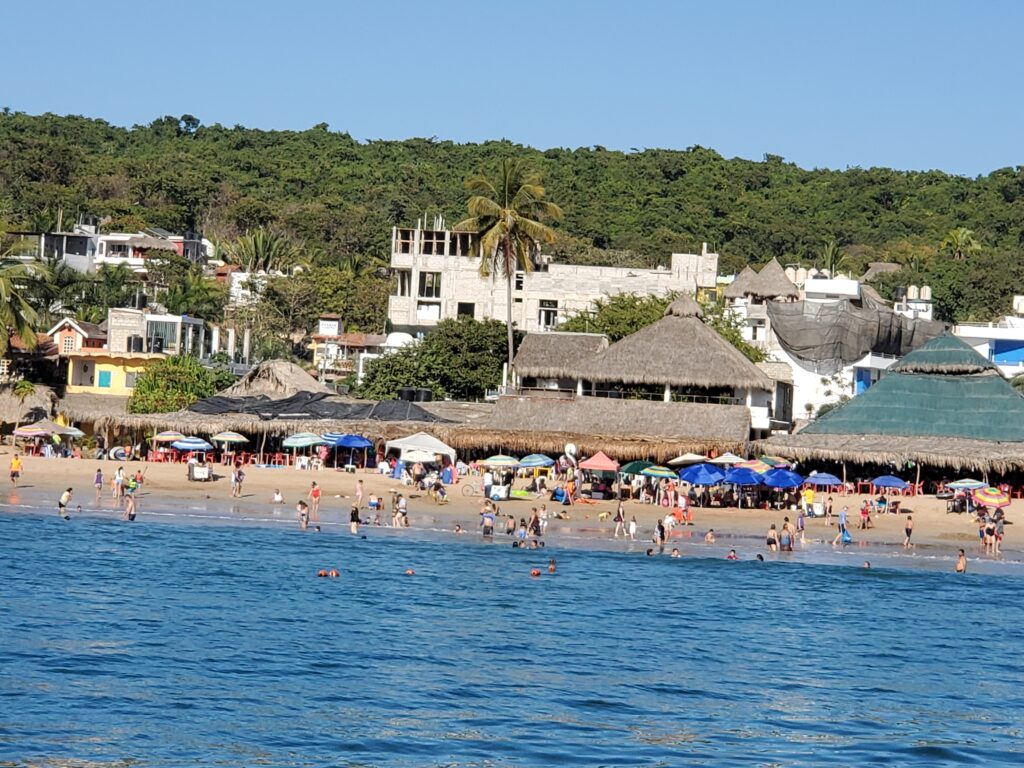 The next morning we headed back to Punta de Mita. As we returned to Banderas Bay we were greeted by whales. Whales close by, close enough that I now know what whale breath smells like. Crazy! I think we all screamed when one whale let out a big puff as it surfaced unexpectedly right next to us. Yikes, those are big animals! On Feb 21 we were back in familiar territory, Marina Vallarta. Our wonderful friends needed to get back to the airport the next day. We did some cleaning and stowing while they found a COVID testing van and made a reservation at a nice Italian restaurant for the evening. After the chores were done, we had fun exploring the marina with iguanas everywhere! Dinner was fabulous, white tablecloths and all! The next day we went into old town to show them the malecon and statues and to have breakfast. We hugged good-bye at the taxi stand and waved as they drove off. What a fun trip!