November 17, time to move! Today we are starting chapter one of “Sea of Cortez, a Cruiser’s Guidebook” by Shawn Breeding and Heather Bansmer, better known by most sailors as “Shawn and Heather’s book”. By February we will be on the last chapter. So exciting! So much to see! The forecast was good for light winds going around the rest of the cape of the Baja Peninsula. The weather from the Pacific can collide with the weather from the Sea of Cortez and create nasty conditions. It is best to wait for good weather. We set out at 7:15 on a beautiful sunny clear day with a light breeze 7 to 9 knots. We spotted some distant whale spouts as we left. Once we passed around the point protecting Cabo, we put up the sails and enjoyed the sound of the water rushing by in rhythm with the waves. Pshhhh…… pshhhh…… pshhhh….. our favorite! Borrowing from a John Lennon song, “I’m just sitting here watching the waves go rolling by-a-ay. Oh, how I love to hear them ro-oll. I just had to get off that merry-go-round, I just had to let it go-oh.” No more work for me! We had a lovely sail until 1:30 when it became clear we would have to stop our back and forth tacking into the wind if we wanted to arrive before dark. We were going up wind! That hasn’t happened in a while! 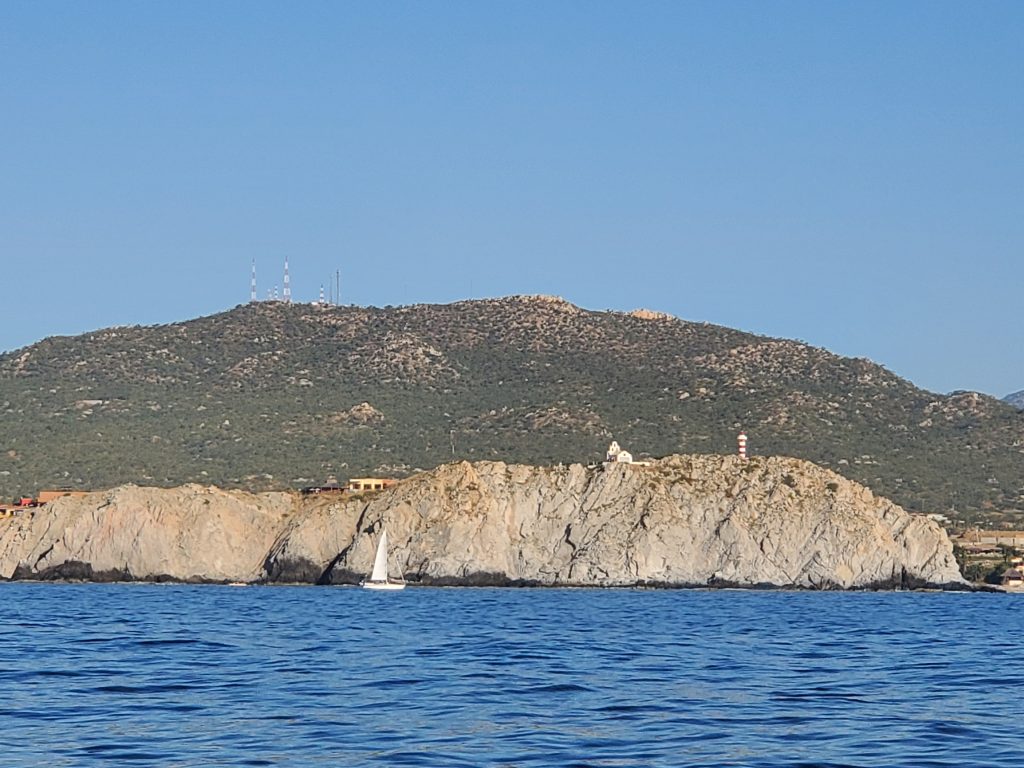 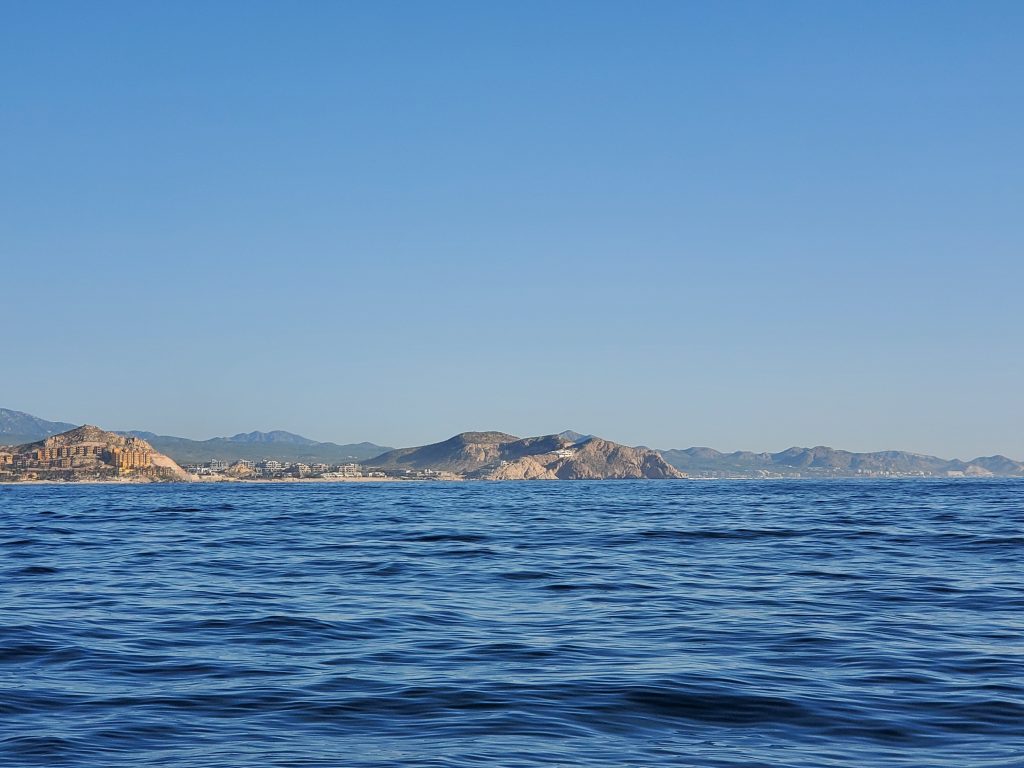 Bahia Las Frailes is about 45 miles from Cabo and it marks our first major heading change from south to north since leaving Seattle. The winds will be in our face as we head north for most of our time in the Sea of Cortez. Most sailors go straight across the sea to the mainland of Mexico and head south toward Guatemala until the seasons change and the winds shift from coming from the north to coming from the south. Then they head north going with the wind up into the Sea of Cortez. We, of course, are going to the beat of our own drum and will be going north until we want to cross the sea and turn south toward Central America. If we start complaining about the wind always being from the direction we wish to go, remind me in your comments that we knowingly chose this route!
We entered the beautiful anchorage in Bahia Las Frailes just as the sun was turning gold to orange. There were some boats anchored in the bay that we recognized, Priya and Remedy! We had a spontaneous party on Sacagawea. We listened to and told stories of our trips down the coast until well after dark (cruisers midnight). The next morning we went for a hike up the 700 foot high rocky hill. The trail was really rugged, marked by cairns the whole way. We were surprised by abundant wild flowers we saw scattered in nooks and crannies among the rocks. How were they surviving in this hot dry climate with so little soil? It was beautiful. We definitely felt like a swim after that rock scramble! We donned our snorkel gear and headed into the 80 degree water (can’t believe it is November!). There is a turtle refuge here and on the previous two days, our friends had the privilege of participating in the release of a mess of hatchlings. No such luck for us but we went and checked out the fenced off area anyway. Time for a sundowner! 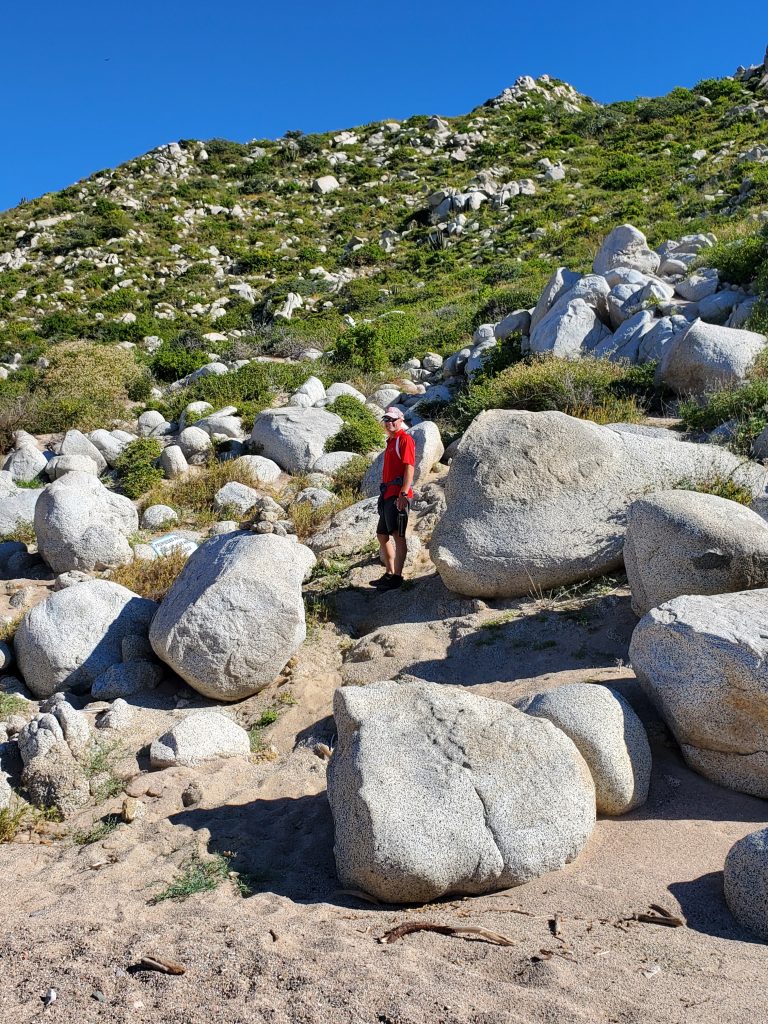 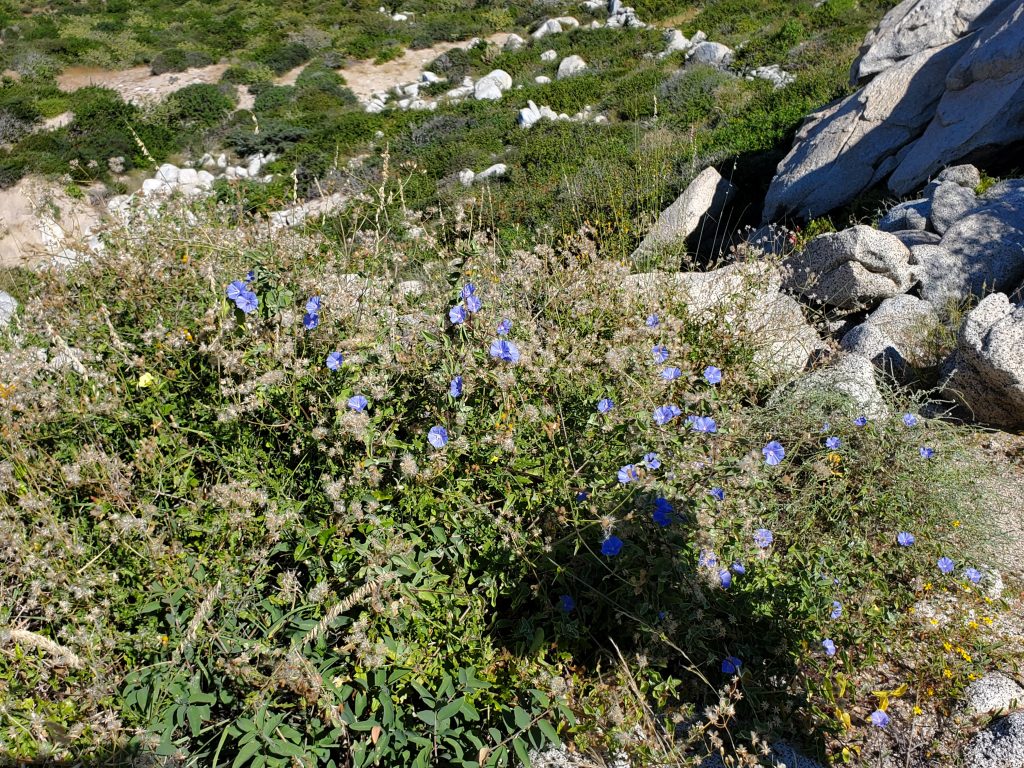 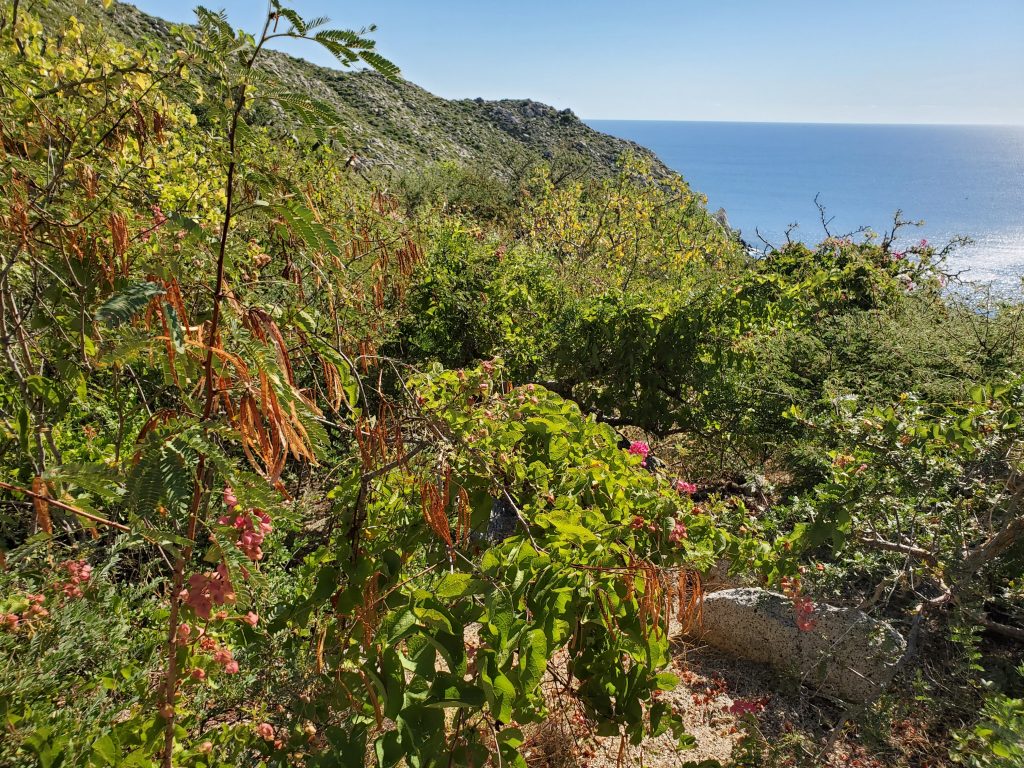 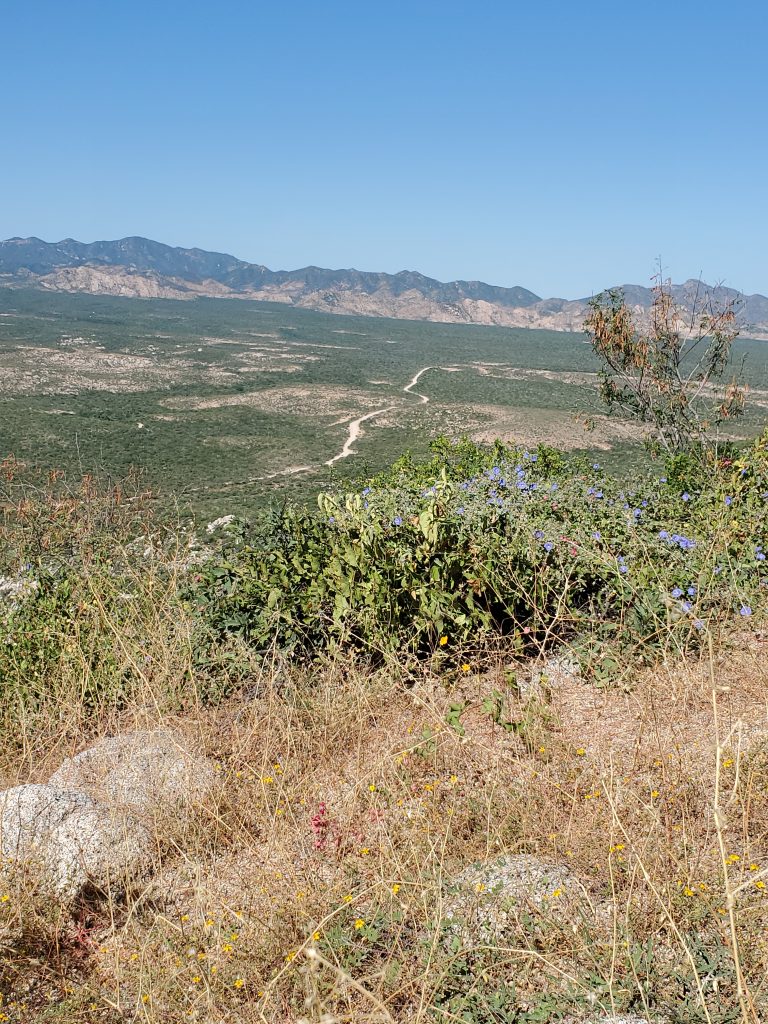 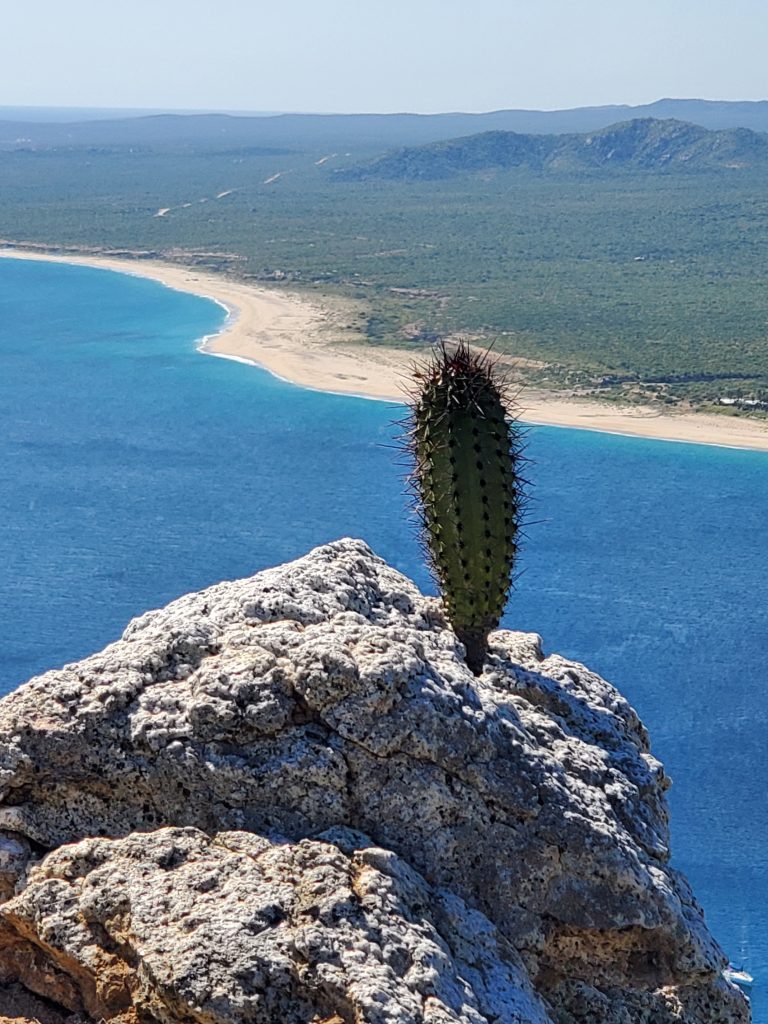 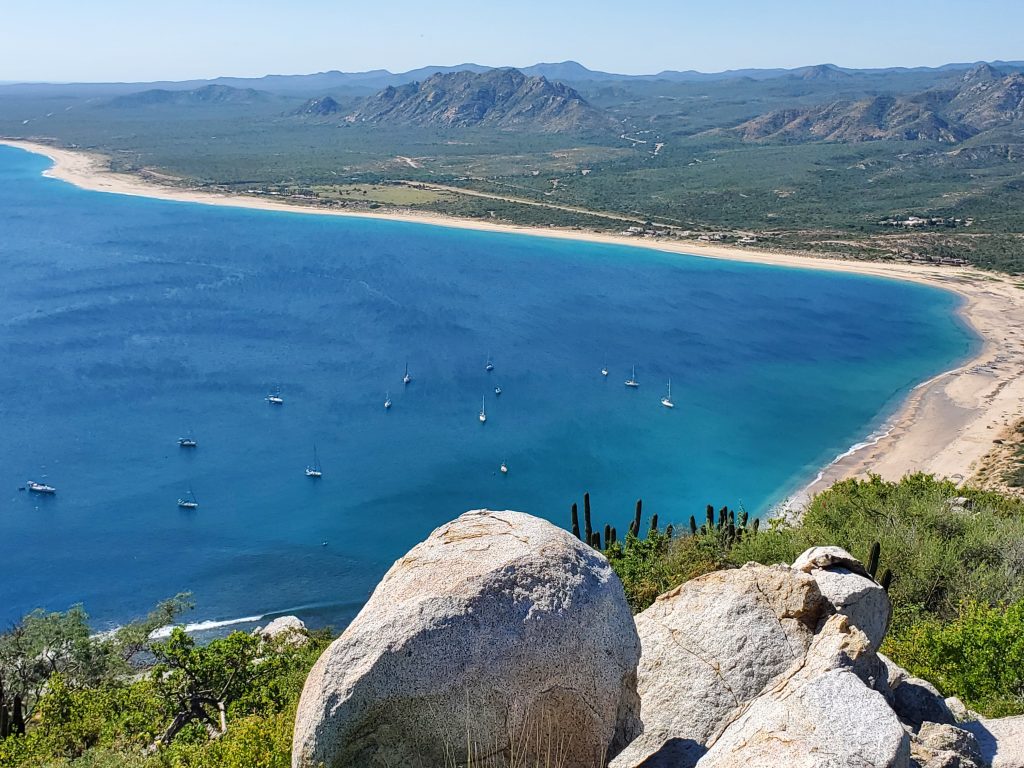 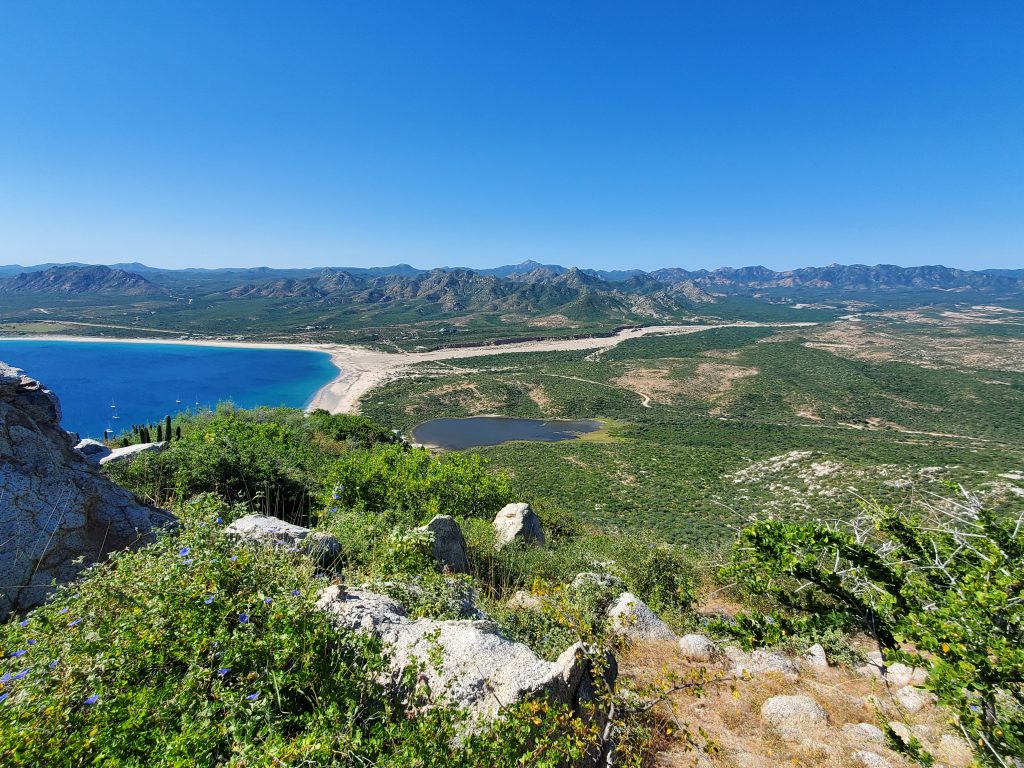 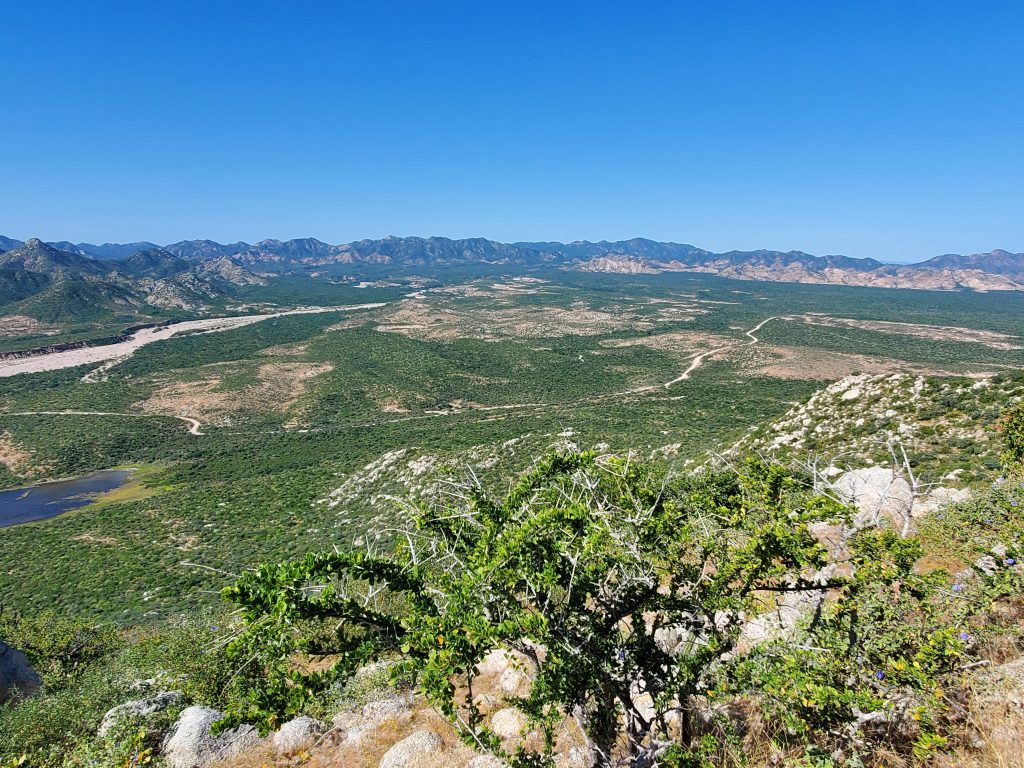 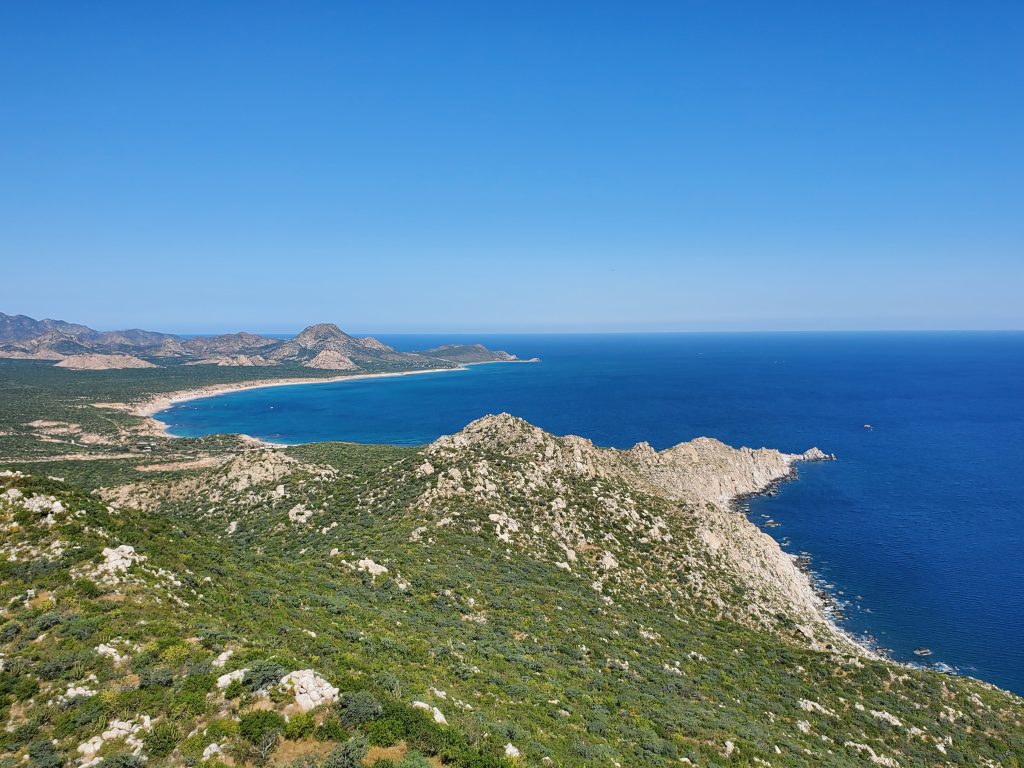 That night there was a partial lunar eclipse which we were able to see perfectly in the clear air with no light pollution, and then we woke to the moonset simultaneous with the sunrise. Spectacular! 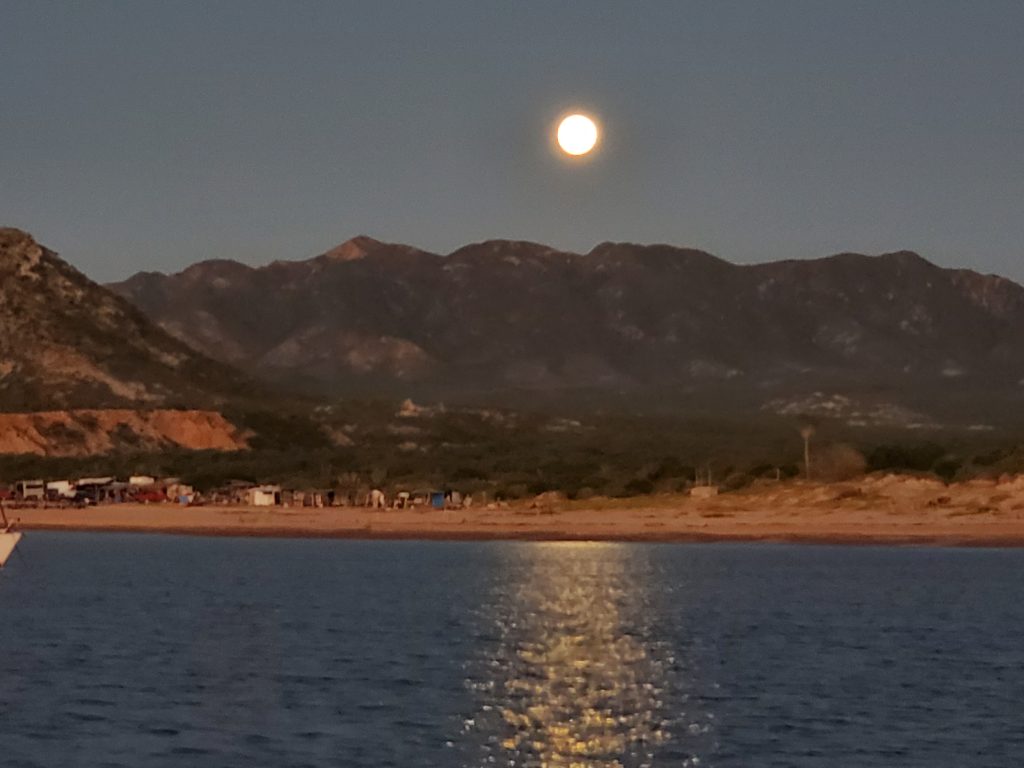 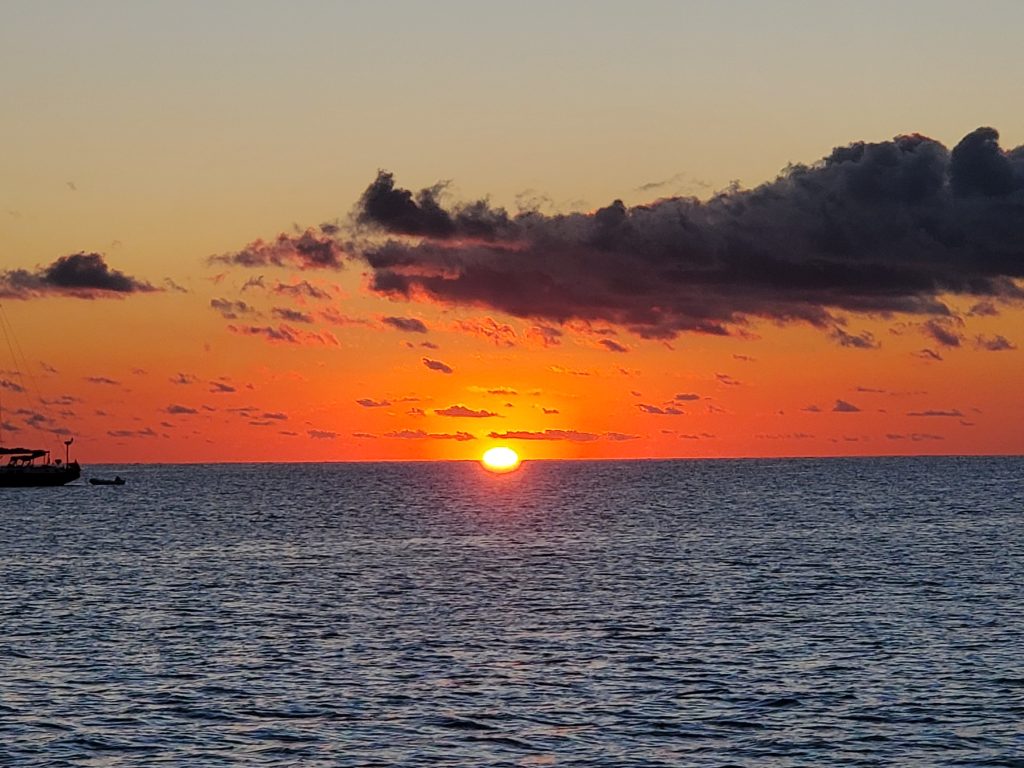 We pulled up anchor at 6:30 to head to Bahia Las Muertos. There was almost no wind the entire 7 hours so we ran the engine (affectionately known as the Iron Jenny). Because we make electricity and hot water while running Jenny we did 3 loads of laundry and made 60 gallons of fresh water along the way. Chores done! We pulled into the anchorage ready to have some fun! We heard that there are two restaurants on the beach here, one on the left side and the other on the right side. We chose to go to the one on the left because it was up a seasonal river bed (arroyo) and sounded interesting. We landed the dinghy on the beach far enough away from the restaurant to allow for a decent beach walk before dinner. 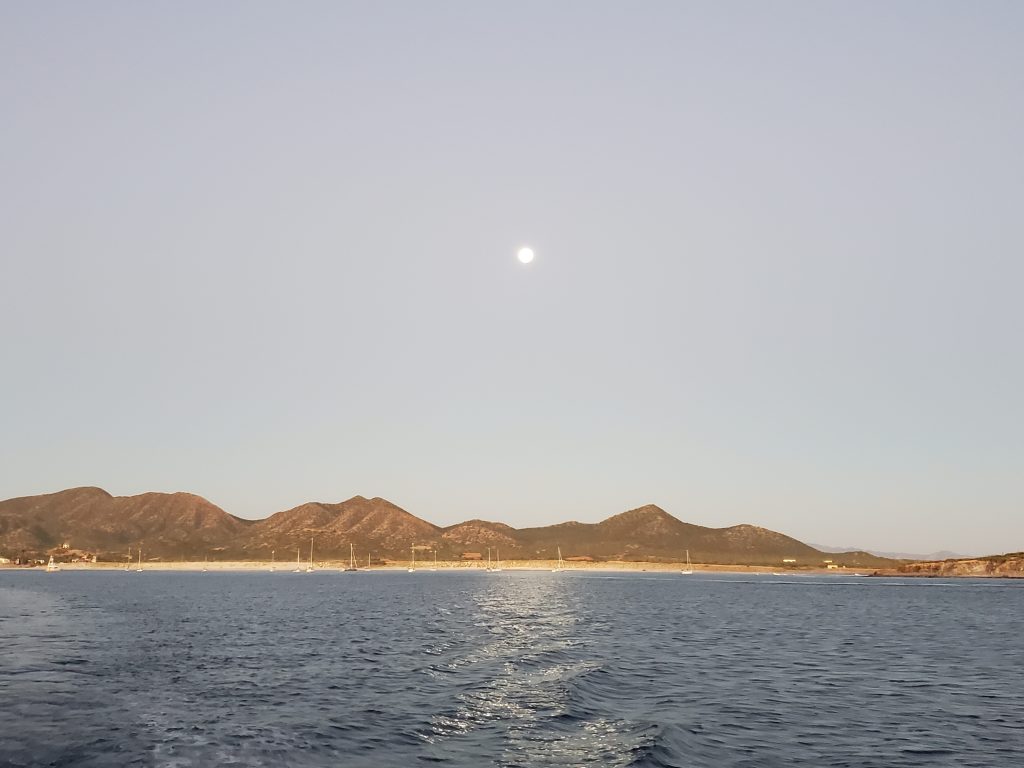 I have to pause and say that my beach landing skills have really improved since my first try in Cabo. On the first try, I was perched up on the front of the dinghy like a cat ready to pounce. As we raced toward shore, I pictured myself leaping gracefully off the boat and onto the sandy beach with the rope in my hand like a cowboy roping a steer and seconds before hitting the bottom pulling the boat up onto the sand to secure it before a wave could wash over the transom and fill it with water. Reality: I leapt, I hit the water, I couldn’t quite touch the bottom, I held onto the dinghy handle while it drug me alongside scooping up sand into my bathing suite like a channel dredger. I came up sputtering, my hair strung over my face, Bill looking at me saying “Honey! What are you doing?” Living and learning was the answer but all I could do was laugh. Anyway, now I sit at the front of the dinghy while Bill pulls up the motor and rows in, then I exit into ankle deep water once we touch bottom. Then I pull up the boat with the next wave and wait while Bill exits to help pull it the rest of the way up onto the beach.
The restaurant was great! It was near a small resort in a garden setting with a small swimming pool. The building structure was completely open, built of large logs and covered with palm fronds. We shared a table with a tiny 90 year old mom and her two sons. Bill and I split the shrimp tacos served with beans and rice while she devoured an entire ½ pound cheese burger and fries. We couldn’t help but congratulate her! She explained that she had grown up in Germany during World War 2 and cannot waste a bite of food. Maybe she only eats twice a week?!? Of course we forgot our phones, so no photos….(eye roll).
We strolled back to the dinghy and met a couple of sailors we knew. As we chatted, Remedy pulled up on the beach. We asked if they would all be at the final Baja Haha party in La Paz. Yes! We will meet again! The day ended with another spectacular moonrise. 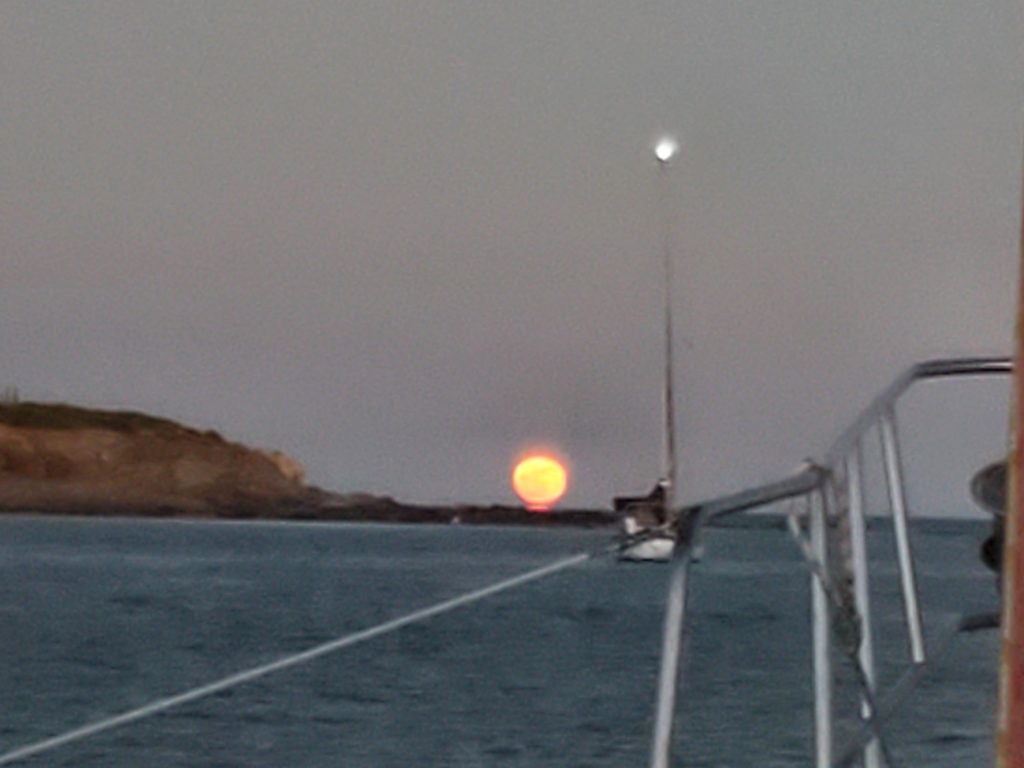 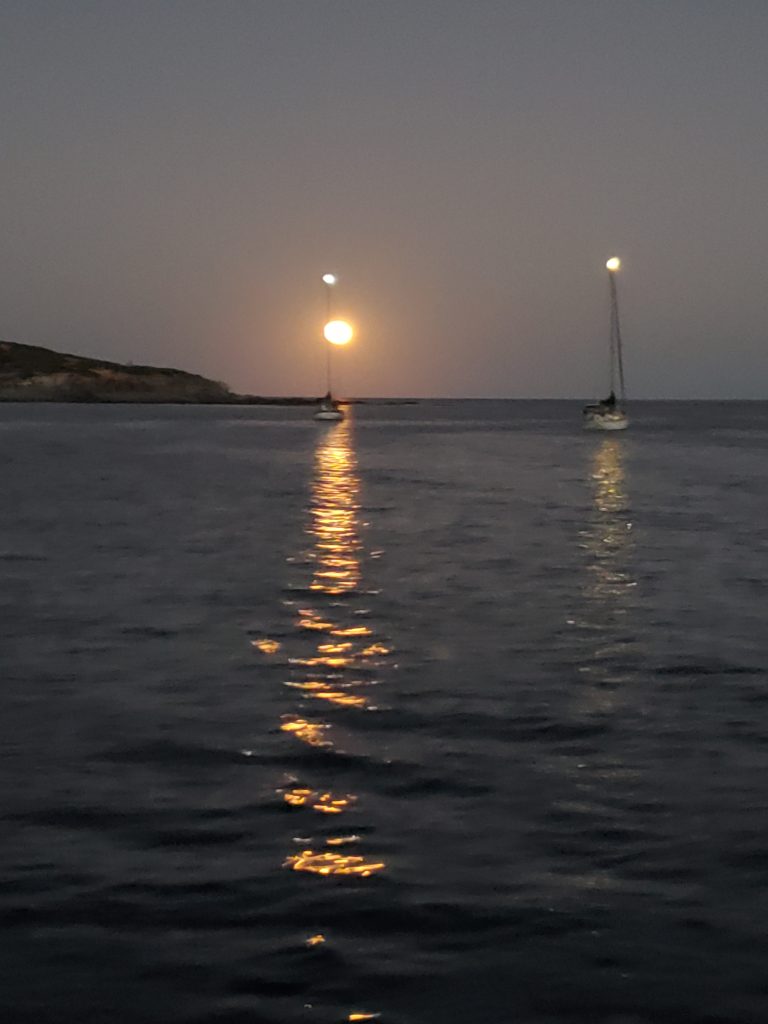