Cabo is a tourist and party town! There were no available slips in the marina so we anchored out along the beach. From our anchorage to the dinghy dock in town was about a 15 minute ride in our dinghy, Pomp (named for the child Sacagawea carried on her back for the entire Lewis and Clark Expedition). Kristin: Each time we went, it got my adrenaline up. There were ocean swells, waves from the wind, and wakes from jet skis, party boats, and other dinghies. It was a rough ride each time! I sat in my usual seat on the starboard side, one hand holding the painter line so that it wouldn’t get sucked up into the outboard motor propeller and the other hand tightly gripping the handle on the dinghy. I told myself “keep your abs tight to prevent back jarring, mouth closed and teeth together to prevent bugs and biting the tongue, face into the wind to keep glasses on the face, and hold on tight!” Once inside the break wall, all was glassy calm and hot! Whew! We had to motor past all of the giant yachts and commercial fishing boats to the dinghy dock where an attendant would grab our line and help us on to the dock, so civilized! A short walk up the ramp and we were in the middle of it! Bars, restaurants, people selling jewelry looped on a pool noodle, wood carvings displayed on the sidewalk, dresses hanging off a broom stick, and people walking everywhere.
We went shopping for a watch and a new bikini. Unbelievably we were skunked in both departments. Oh well, who needs a bathing suit anyway and do I really need to know what time it is these days? It was fun to run into Stella J along the way, just as I was trying on bikinis of course!
There was another party to attend so we went off to find it on the upstairs deck of Mango Deck. The tables were large and everyone just joined in where a spot could be found. It was so much fun to put a face to the voice of some of the sailors who we had been hearing on the radio along the way down! 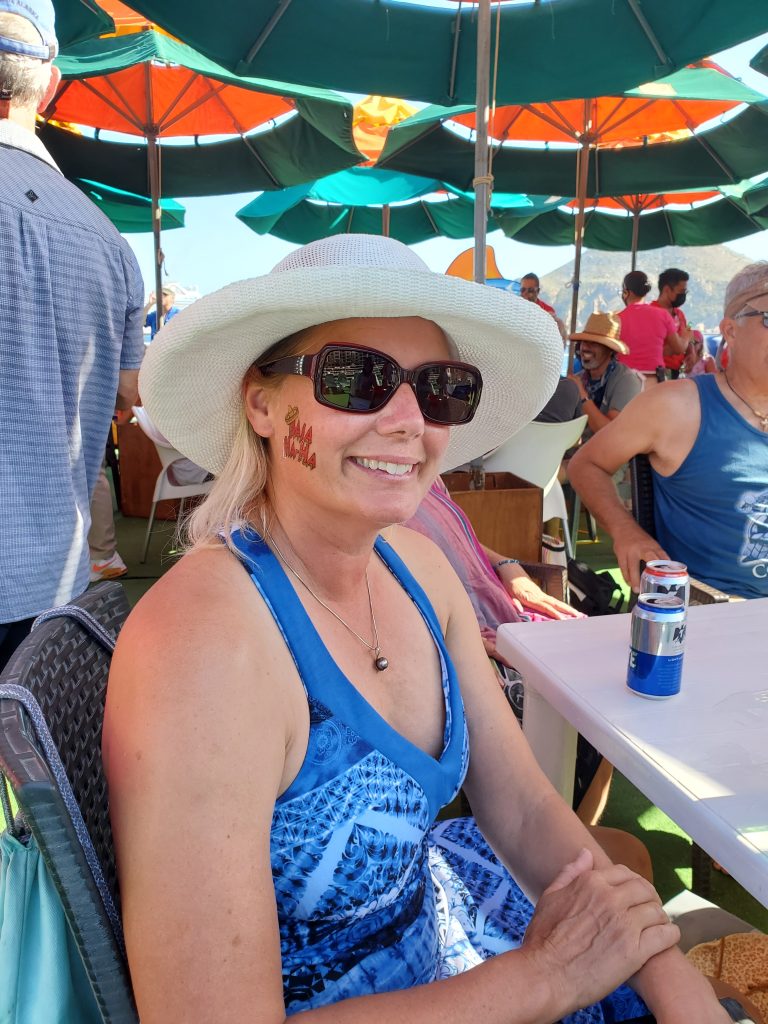 The weather forecast called for winds over 20 knots for the next few days so we were “stuck” poor us! We had some time to relax! The hammock was fun but I wouldn’t say it was relaxing. Swell rocked the boat like crazy so hanging out in the hammock was a carnival ride! 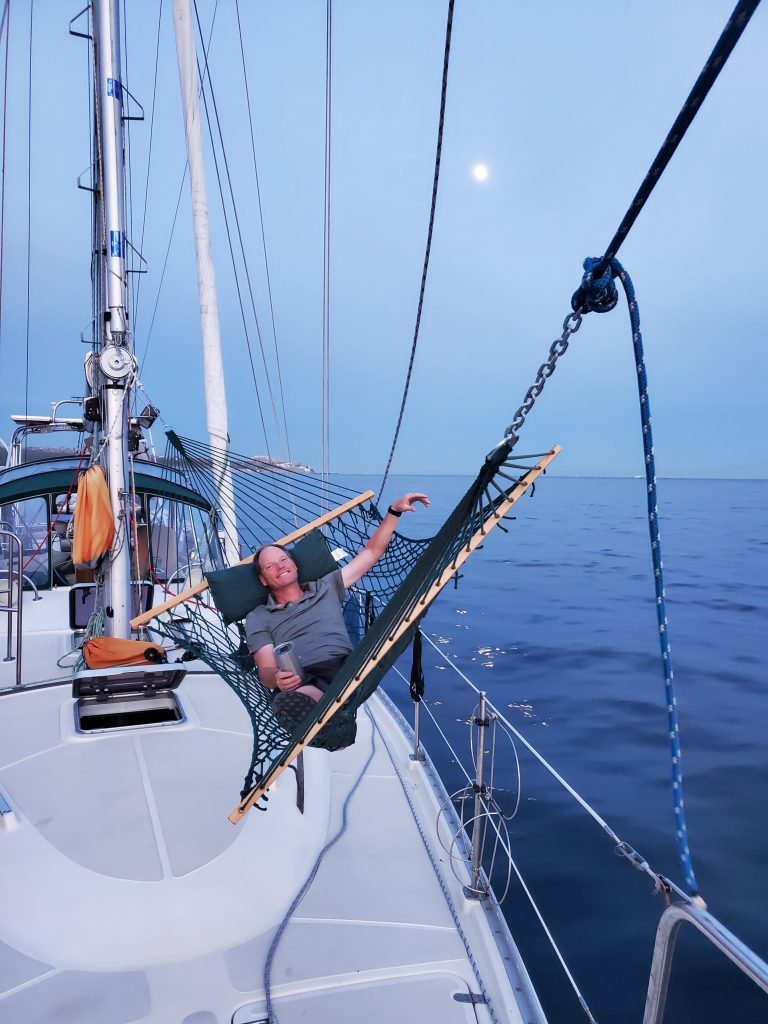 We took advantage of calmer conditions in the morning to go check out the famous Honeymoon Beach at the point. Bill: The tip of Baja California Sur is truly spectacular, with huge rocks thrusting up and weathering away from the relentless Pacific pounding at them, creating arches and smooth, curving walls surrounding a fantastically pretty beach that crosses from the Sea of Cortez side to the Pacific side, one side with smaller waves lapping the sand- the other with giant rollers crashing ashore. Our first dinghy landing went pretty well. Kristin was so eager to leap out and drag us ashore before a wave could swamp the transom that she was a bit premature…..but very graceful! LOL! Next time she says she will wait til we actually touch the bottom before she jumps out. After she regained the surface and got her footing all went smoothly as we dragged Pomp up the beach above the tide line and explored the beach. We intended to snorkel, so we wore our new stinger/sun protection suits. That part wasn’t as successful because the snorkeling was better around the corner in a rocky section which we didn’t feel comfortable swimming to, and the tourist pangas were starting to queue up with paying passengers for the snorkeling and beach excursions, so we hung out in the water chatting with the family from Nike, and helping the crew from The Cat pull their dinghy up the beach. They helped us drag Pomp back down into the water and we had a successful launch! 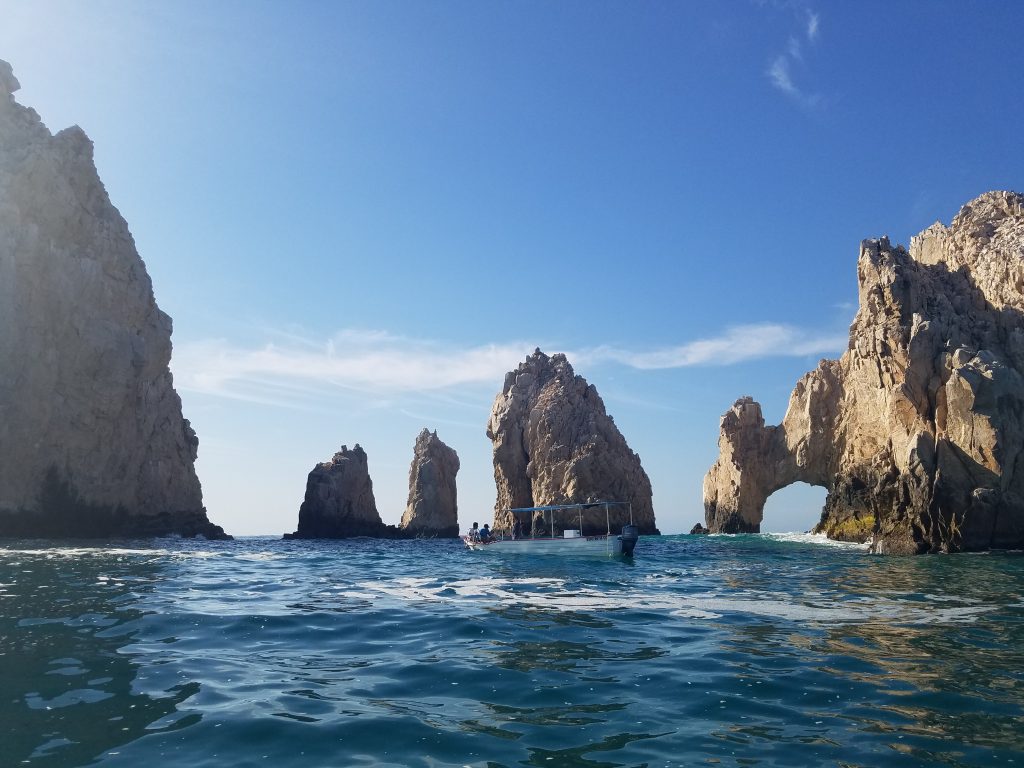 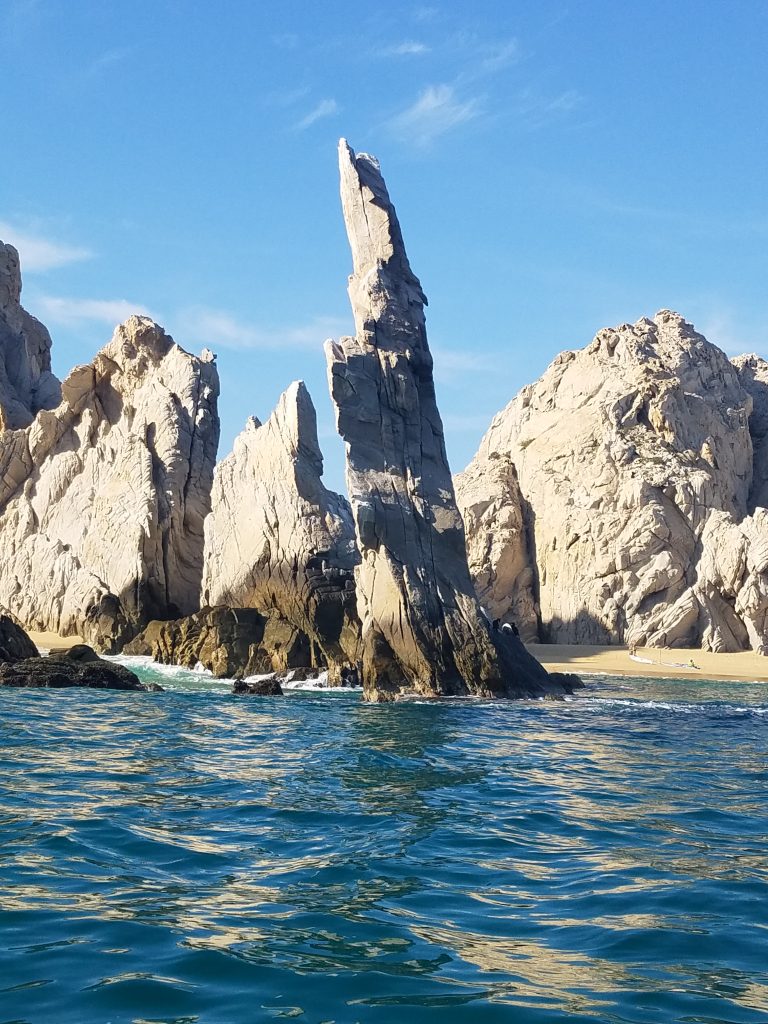 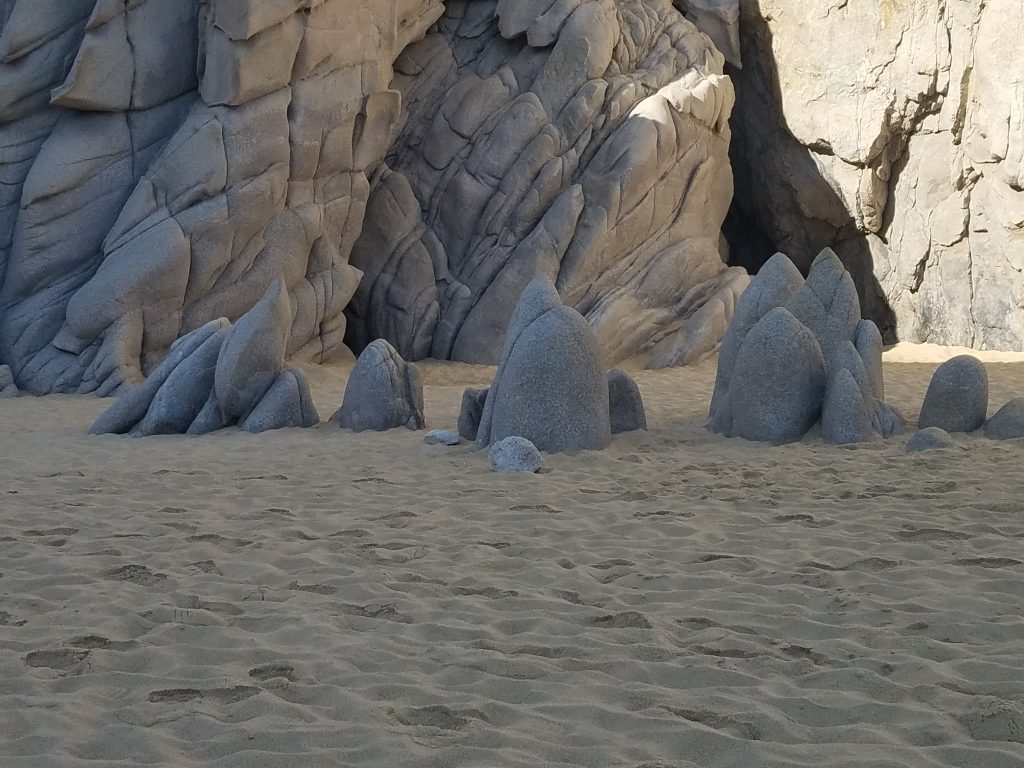 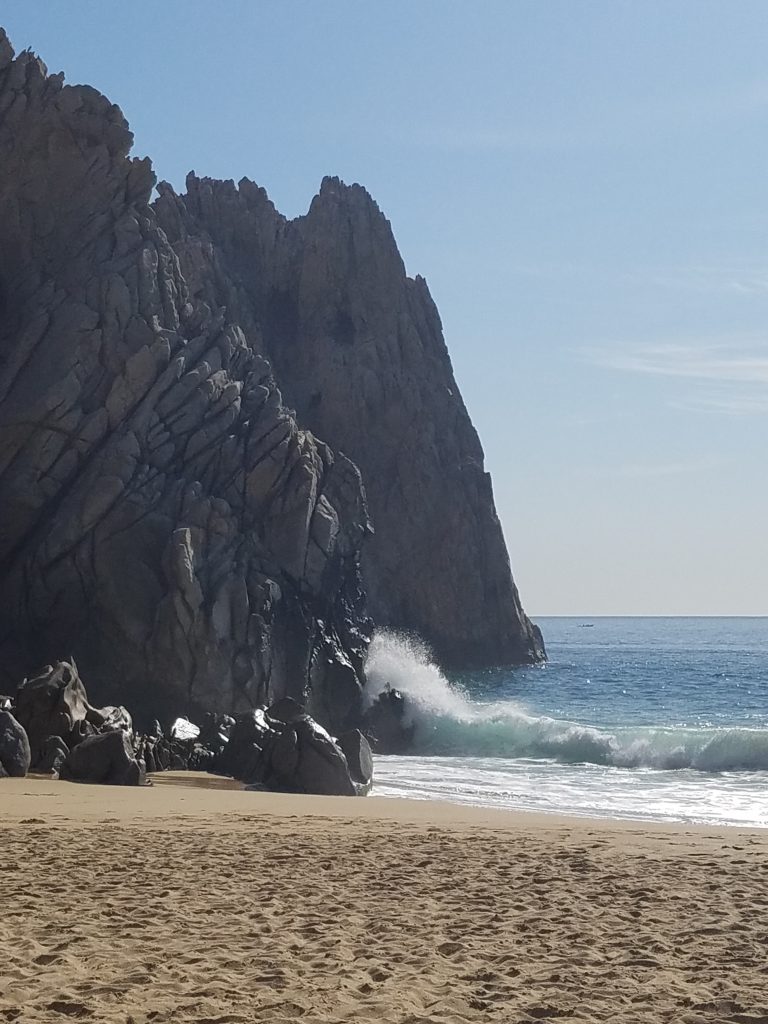 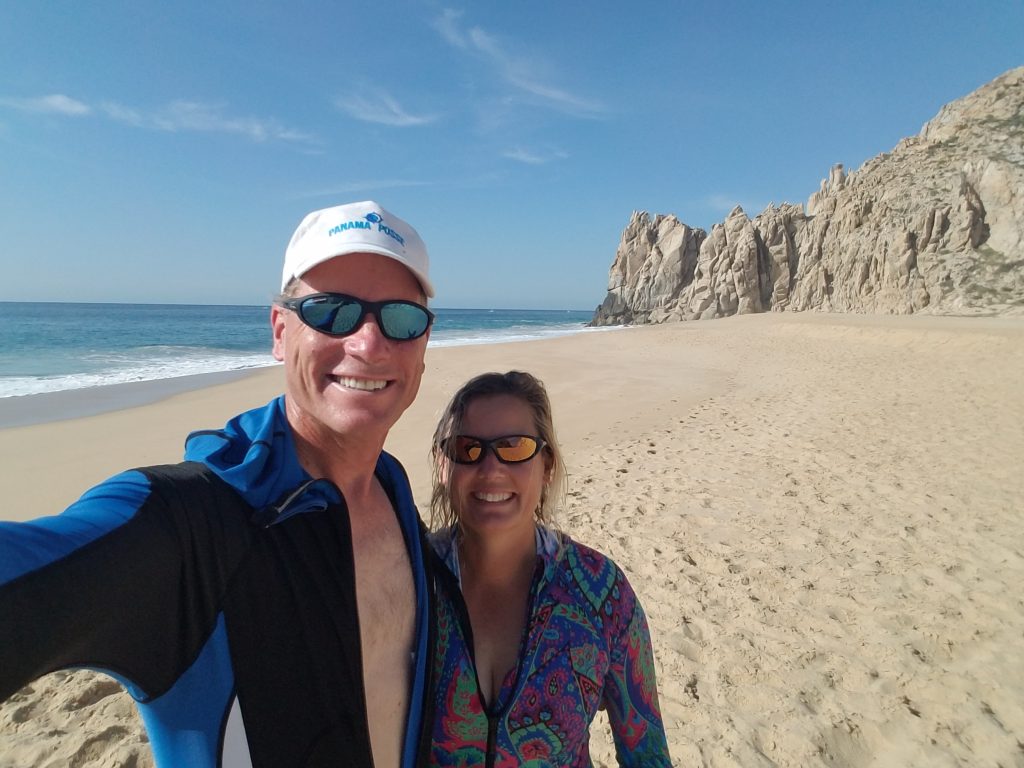 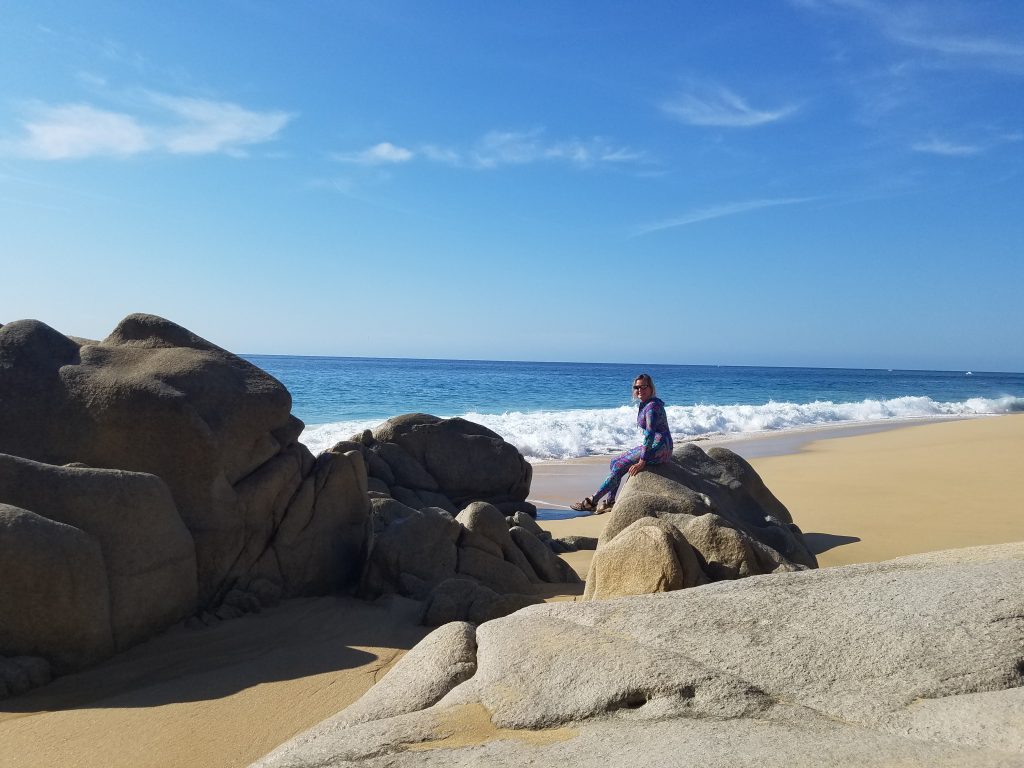 Saturday was the Baja Haha Awards Party. Another party, and who can turn down painted wooden fish prizes and free beer?! It was a bunch of fun, and we came in third in our class!! Apparently it was a seven-way tie for third in our class of nine boats… It was really nice to have our crew text us that we should win the prizes for “Most Fun Boat” and “Best Fed Boat”! After the party we ferried out the crew from Rochambeau on our way to Sacagawea. Everyone out at the far East end of the anchorage seemed to appreciate that we left our stern arch lights on bright hot pink at night as a beacon to find her in the dark after all these parties- turns out they were all using her as beacon as well!

Sunday was football. During our unsuccessful shopping escapade, we found a couple of sports bars who would be playing the games. We dressed up in our NFL gear and once again, entered the “washing machine” in the dinghy. Bill’s excellent dinghy driving was successful again and we were only a little damp. As we walked up the ramp a guy opening the upstairs, open-air bar saw our jerseys and called to us to come watch the game there. We were the first patrons there, which unbeknownst to us meant our game would have sound! Win! Second story view out over the marina and downtown with a slight breeze to cool us in the 85 degree temps, also a win. And the Pats won too! Later the crew of The Cat met us at the bar so we stayed for the second game also. It brought us back to times at the Meagher Bar in Missoula when occasionally friends came and went on football Sunday. We had been known to stay for all three games! After the games we wandered the waterfront and wound up at a little bar called Red Rum with a live musician and fun, crazy people from Wisconsin who we wound up dancing and doing shots with. 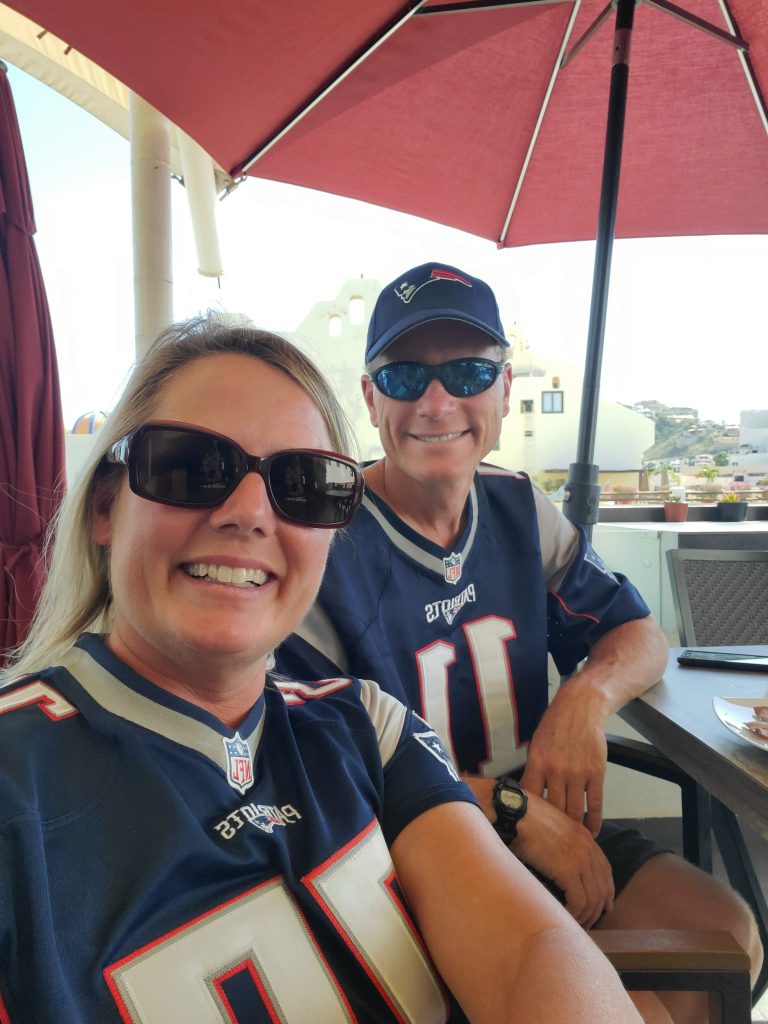 Monday was a holiday in Mexico, Revolution Day, celebrating the Revolution of 1913. Most of the town was closed down for the celebration. We decided not to go into town so we cleaned the boat and began preparations to leave on Wednesday. Sheesh she was salt-crusted along the toerails!

Tuesday, we were hoping to get the actual paper copies of our TIP and other documentation. I made fresh baked chocolate chip cookies as a thank you. We went into town at 11:30 with the cookies and the computer and found a place with WIFI to upload a blog entry, catch up on news, and answer some emails. We called our agent and she said she would be there around 1pm. Perfect! She said to call back at 1:30. We did, no answer, we had lunch, called again no answer, we finished uploading the blog and called, no answer, we had several more beers and called, no answer. 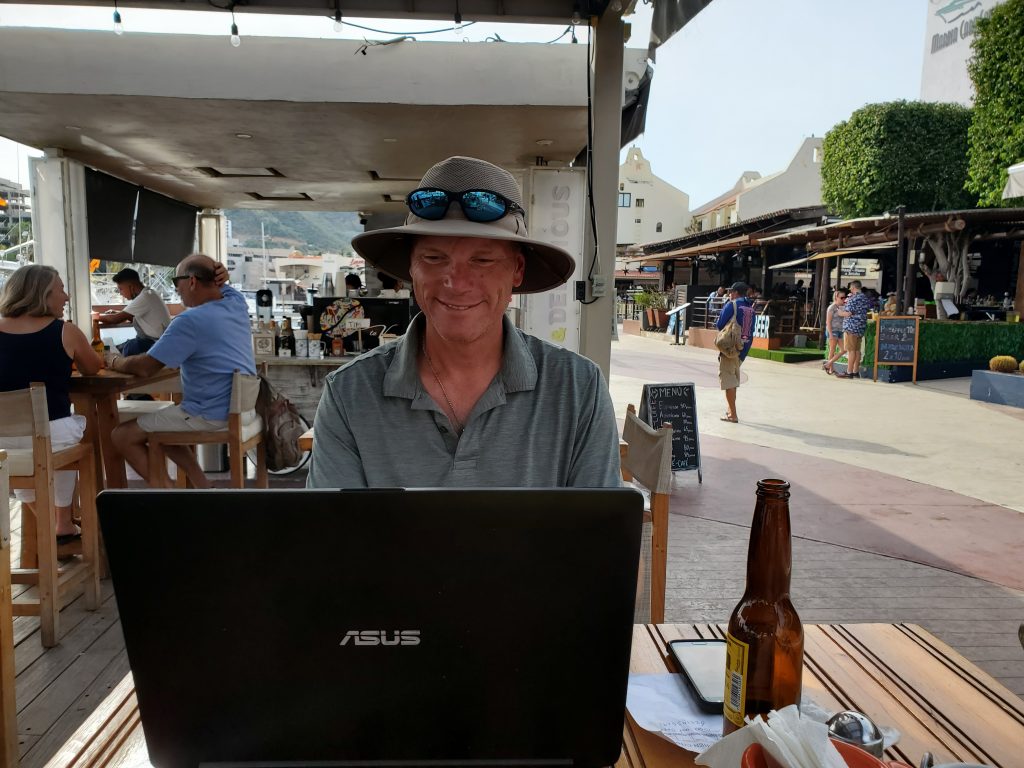 We gave up at 5:30 and weaved our way back to the dinghy. As we skipped along the waves, wakes, and swell we saw Nike the Baja Haha boat with three kids aboard. COOKIES! We stopped and pleaded for them to give our cookies a home. All three kids scrambled for the bag and appeared to levitate above the deck as they thanked us repeatedly and retreated to eat them.
Tomorrow we are leaving Cabo and heading further up around the tip of the Baja peninsula into the Sea of Cortez! We will head north up the sea eventually to the Midriff Islands before we cross East to the mainland side and turn back south. We will wind up being further north than we were on our first stop with the Baja Haha! Crazy! 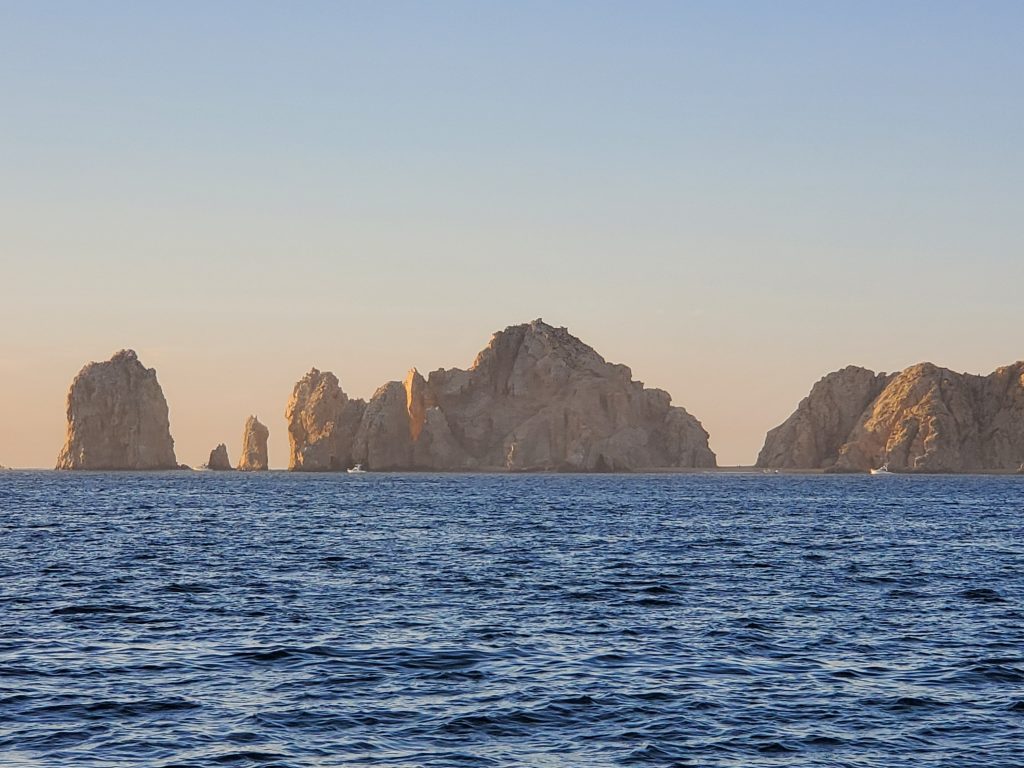