We sailed back into La Paz to fuel up and get some more provisions before heading further north, but our main goal was the pursuit of shadowy giants. We spent a night in Bahia Falsa, just outside the channel into La Paz, to see if the cell service there would be strong enough for us to stream the audio for the Griz game coming up on Saturday. Not only was the service strong enough, but the bay was really quite pretty and our friends on Remedy were there too! The giant ferries and cargo ships rounding the corner were no issue because they slowed to a crawl to make the tight turn past us, creating no real wakes. Though huge, they were not the giants we were in search of. We had a fun night catching up with Remedy and wound up saying rather awkward good-byes as they stepped into their dinghy, suddenly realizing we might not see them again. They are staying on in La Paz to work remotely for a while. The double-edged sword of getting to meet all these really wonderful, interesting, adventurous people as we travel is that we also, often all-too-soon, travel away from them, our wakes moving in divergent directions. 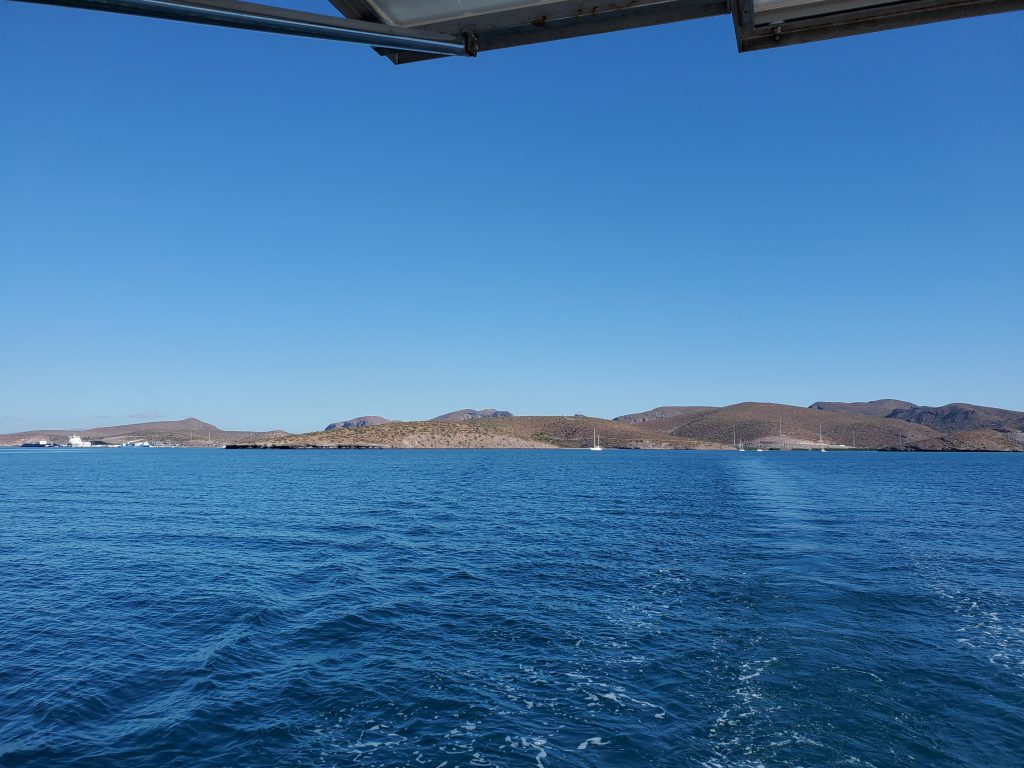 The next morning we called to make an appointment to fuel up at Marina Cortez and headed over. We wound up being in line behind a couple of large motor yachts with huge tanks. After a little while of floating about in the vicinity of a massive sailing superyacht we were able to tie up alongside the fuel dock, still waiting to move forward into a spot to get fuel. Then the big charter catamarans began to replace each other at the dock, and then a newly purchased charter cat had a meet-and-greet party with the new owners, who we lent a bottle-opener to. Sacagawea seemed small amongst all these oversized boats, but even with all of their size and sleek lines they were not what we were seeking. With all the free time we texted our friends on Stella J (who had a slip at that marina) and they dinghied over with Ramie the chocolate lab to keep us company. Soon we were able to move up to a pump and start fueling, prompting another round of goodbyes and realizations we were moving on from these friends we had made all the way back in the San Juan Islands through the Coho Hoho rally group. Kind of a sobering morning.

From the fuel dock we made the trek down the long channel into La Paz again, anchoring near our earlier spot outside Marina La Paz so we would be ready for our morning expedition. There we saw our friends on Priya and The Cat, and met a new neighbor who lived full-time in the harbor until he could find a new partner to sail away with. He was a wealth of information about all things La Paz, however we already had all the inside information we needed from our Baja Haha crew who had reconnoitered in advance for us weeks earlier, prepping us for our upcoming murky mission. We roped The Cat into joining us- it’s always good to have a group when in pursuit of goliaths…

Saturday morning dawned with a rush of activity; drop the dinghy, take in trash and recycles, get the propane cylinders refilled, meet our fearless expedition leader, don wetsuits, prep cameras, and speed off in a panga which had us all quoting the famous line from “Jaws” about needing a bigger boat. First we had to get clearance to enter the wildlife refuge, then began a slow motor across the preserve as we were briefed on what to look for, how to act, what not to do, exhortations to be alert at all times, and final preparations of GoPros and snorkel gear. We were equal parts disappointed and relieved to hear that we would likely only be swimming with “juveniles”, not full-grown adults. They would still be bigger than the panga. Then, there they were!! Two of them, then three! Into the water we went, as stealthily as possible, and off kicking strongly to catch up. As we gained on the shadowy behemoths the sun came through stronger and we could clearly see at very close range the gorgeous Whale Sharks we had been lucky enough to find! Dark blue/black bodies with white and yellowish spots in patterns unique as fingerprints, enormous mouths agape filtering out their tiny and plentiful food sources, vestigial flat teeth barely visible around the fish swimming literally inside their open mouths, schools more swimming along under them and near them for perceived safety from larger fish. It was amazing!

We had to keep our heads on a swivel, because several times another gentle giant would suddenly appear off to one side or another, swimming across us and “our” shark in the relatively shallow water, literally brushing over or under one another. We did not want to be in between these 20 foot bodies when they made contact, nor accidentally wind up in front of one of their mouths! They were curious about us too, several times turning fully around to look at us and to see what we were. I can only imagine what it would be like to come across a 40 foot adult! Unfortunately these slow-moving surface-feeders are prone to accidental impacts from propellers, most showing stripes of scars on their backs and tails, similar to Manatees in Florida. This preserve outside La Paz is important for their protection and study. Adults are difficult to study because they spread out and their habits are not well known once that happens. The “nurseries” are the only spots where you can consistently find groups of them as they grow large enough to venture out into the world. Our guide Karen, a wildlife biologist, was wonderfully knowledgeable and has spent her entire university and post-university career studying them. She eagerly relayed all kinds of information to us and answered all of our questions.

We spent almost an hour in the water with the sharks and then clambered back aboard the panga for the return trip to La Paz, talking excitedly about what we had just been able to do, figuring out how to share GoPro footage, and enjoying the incredibly beautiful day. We had successfully swum with giants!!