Sorry for our long hiatus from posting! We have been travelling away from the boat a bit this past month, and the wifi here in El Salvador has not been the best, but we are getting back to posting again and will do our best to get closer to our real-time adventures. We hope everyone is healthy and happy and enjoying the beginning of summer!

The Copper Canyon train route took 90 years and 90 million dollars to build. It opened in 1961 and was created with tourism in mind. The trip starts in Los Mochis and takes 9 hours to cover the 220 miles inland to the mountain town of Creel through the beautiful Copper Canyon area. It is possible to arrange to get off the train at several stops but it would require waiting two days at each stop for the next north bound train and to do that the tickets need to be purchased for the whole itinerary and hotels arranged. We were limited on time because we had friends to meet in La Cruz in a week and lots of miles to get there, so we were happy to just stay aboard to the end of the line and hop back on the next morning for our return trip. The train travels through the lands of the Tarahumara Indians who are famous for their ultra-long distance running wearing only sandals. They are some of the fastest long distance runners in the world and they were made famous by the book “Born to Run” by Christopher McDougall. For the trip, we packed extra layers and our winter jackets in our overnight bags expecting freezing temperatures in Creel at an altitude of 7700 feet. We had made reservations at a cute looking hotel with each room being a small wooden cabin.

It was time to board! We had first class tickets and we weren’t sure where to go. I just kept showing our boarding passed to anyone in uniform until an attendant who spoke English said “You are mine! Come with me.” It felt good to be “owned” in this time of chaos with everyone exiting the station at the same time. We were shown to the back of the train and waited with other excited looking passengers by the sign that said “Primera Clase” When we were all assembled the attendant welcomed the group aboard and explained the layout. There was a dining car with full glass domed windows and white table cloths where breakfast and lunch would be served. One of the meals was included with our first class tickets. We ended up having both breakfast and lunch. For breakfast we had Chiliquilles which is basically tortilla chips covered in sauce and cheese. Yes, we had nachos for breakfast! Then there was the car with our seats, big cushy reclining seats with charging ports and a wooden fold out table. Next was the lounge car with a bar and round cocktail style seats and tables. Finally there was the caboose which was called the bar car. It had a counter around the perimeter with swiveling bar stools. The windows in the last car were all down allowing for photos without any glass in the way. We enjoyed all of these cars and barely sat in our seats at all. 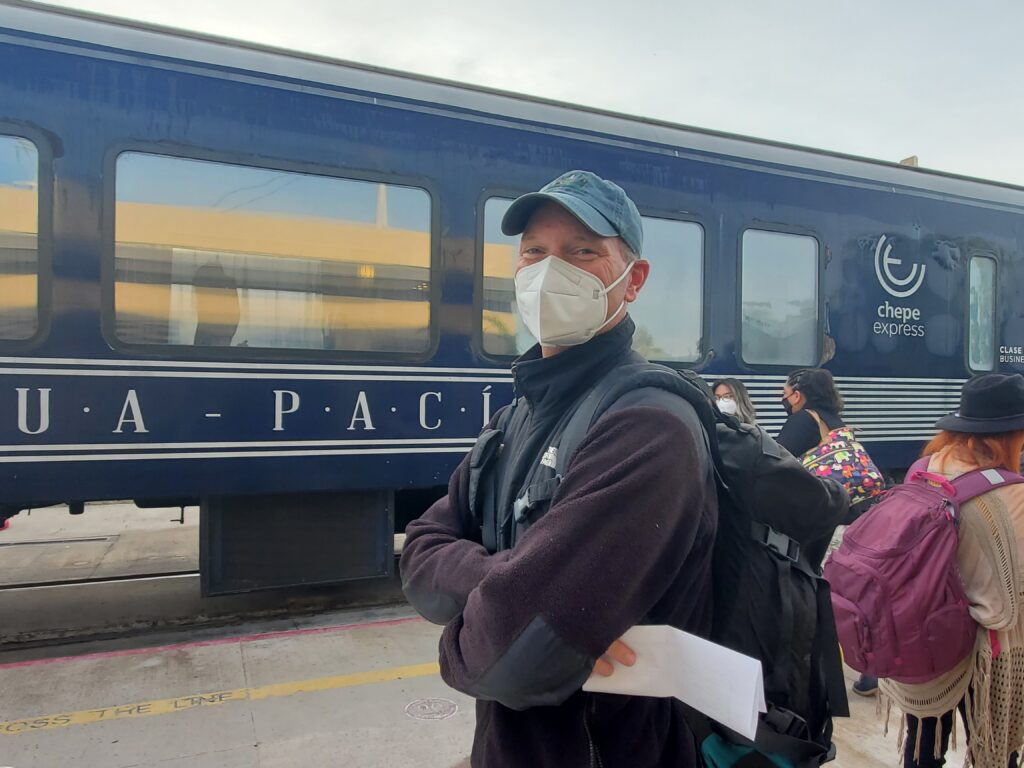 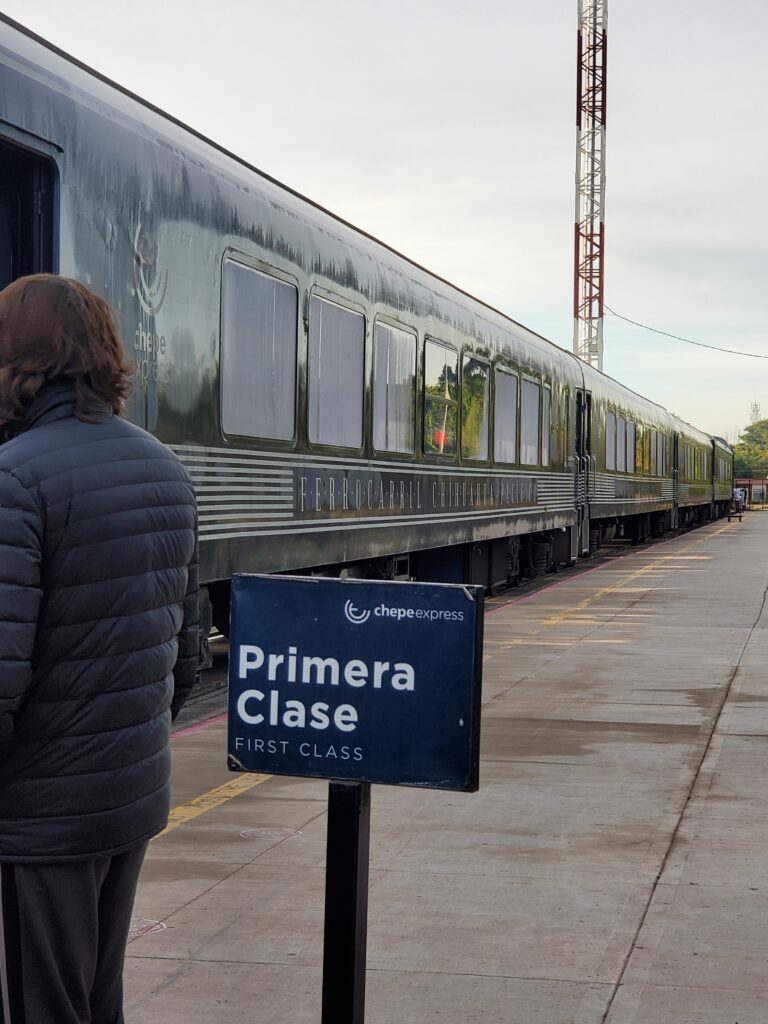 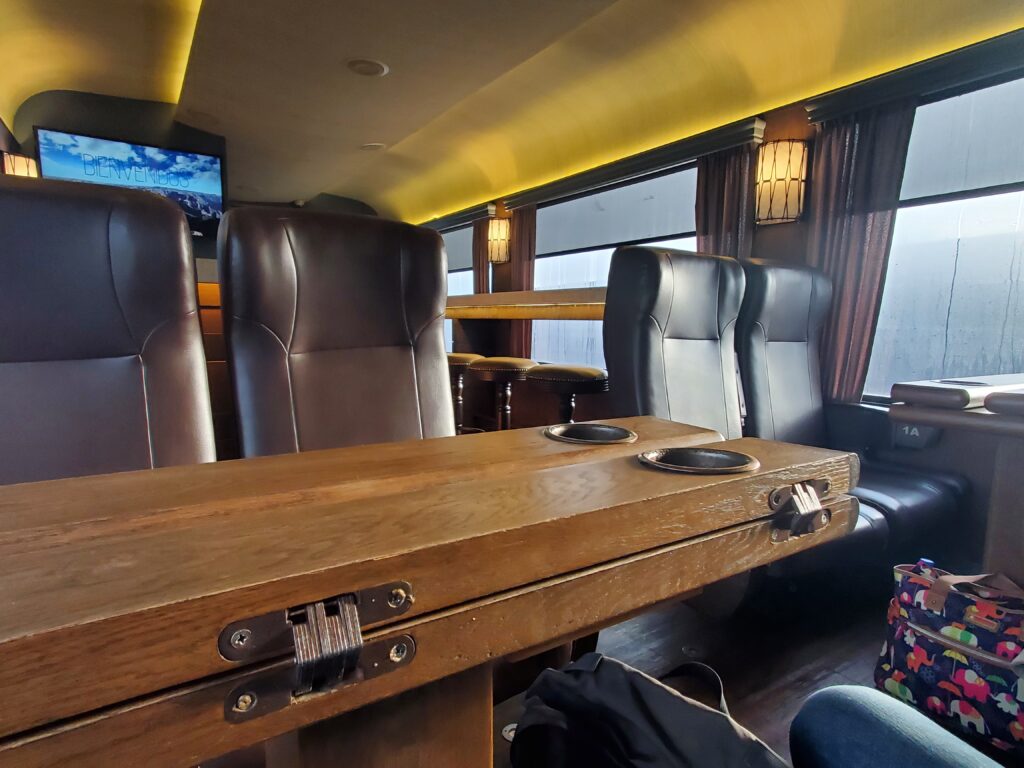 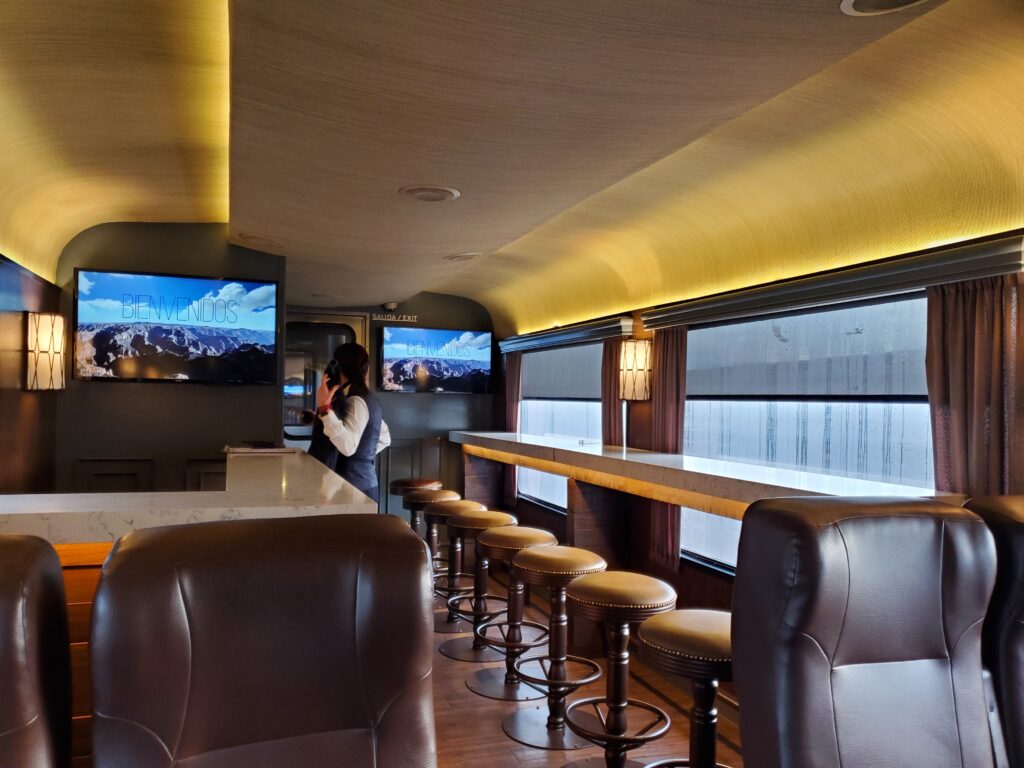 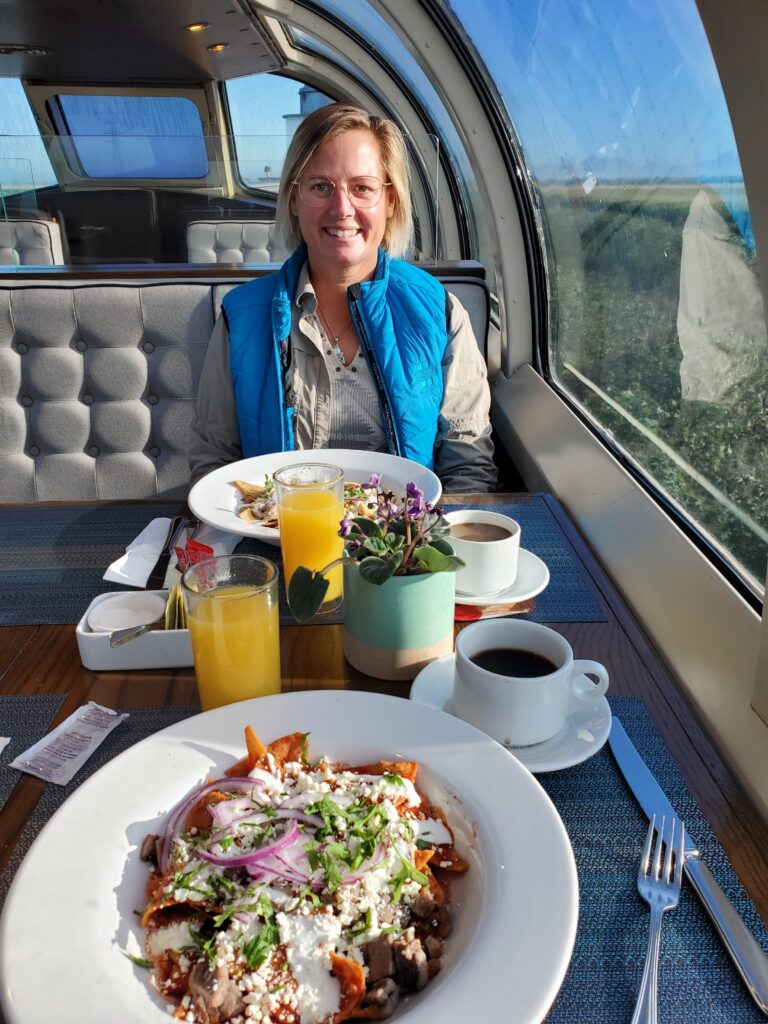 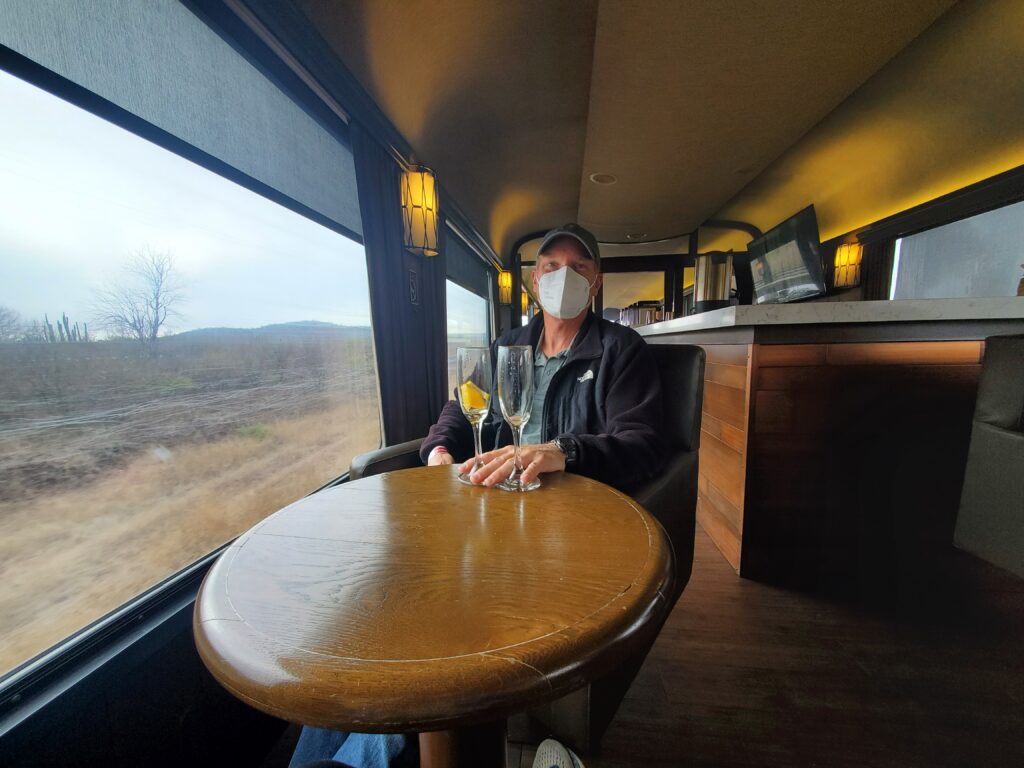 We started out of Los Mochis and quickly entered an agricultural region. The land was flat and had plenty of water. We could not make out what all of the crops were but corn was one. Pickup trucks and horses made us think of Texas. As we went on further, we started seeing more hills and smaller towns. It was beautiful with pink flowering trees dotting the hillsides. As we climbed further into the mountains and into the canyon area, the towns disappeared and the views of the canyon became impressive. At this point, we began to go through tunnels and over bridges. This must have been why it took 90 years to build. There are 39 bridges and 86 tunnels along the route. At times the train doubled back on itself as we climbed up the steep canyon walls. We arrived at the station in Creel as the sun was setting. Another couple from Minnesota was staying at the Villa Mexicana and we shared a ride in the van. We got checked in and I have to say it was as cute as advertised. We all met back at the dining room for dinner together. It was a great evening of sharing Mexican experiences. They had a condo they use a couple of months a year in Mexico and they always tried to go on an excursion while they are in the country. 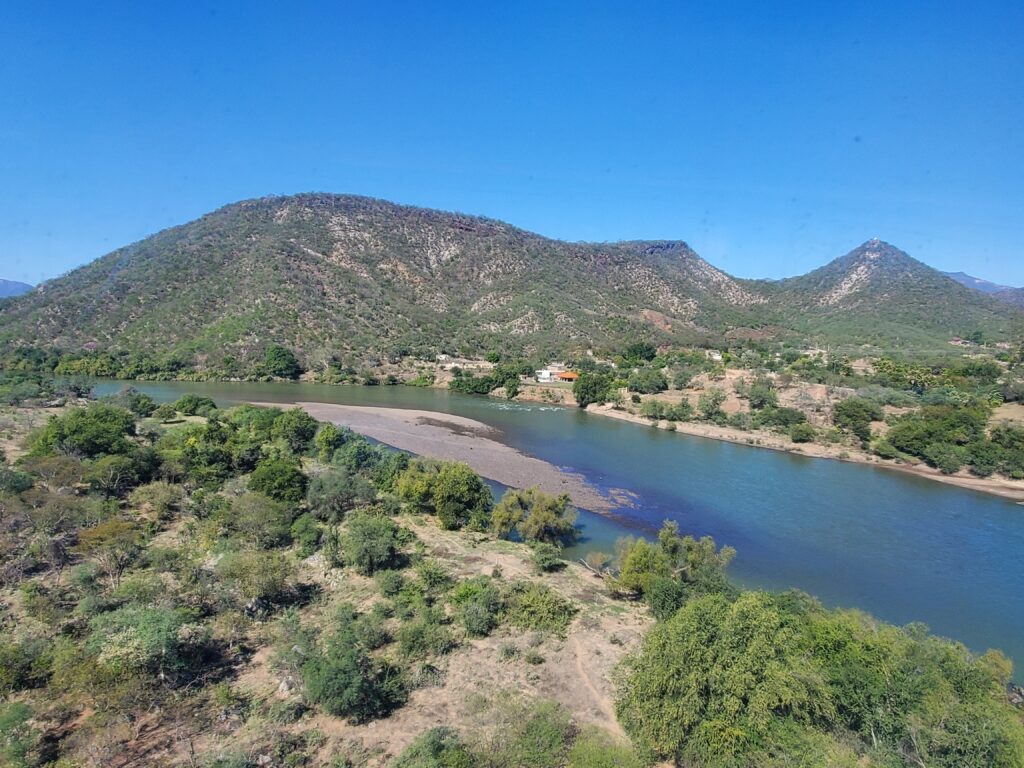 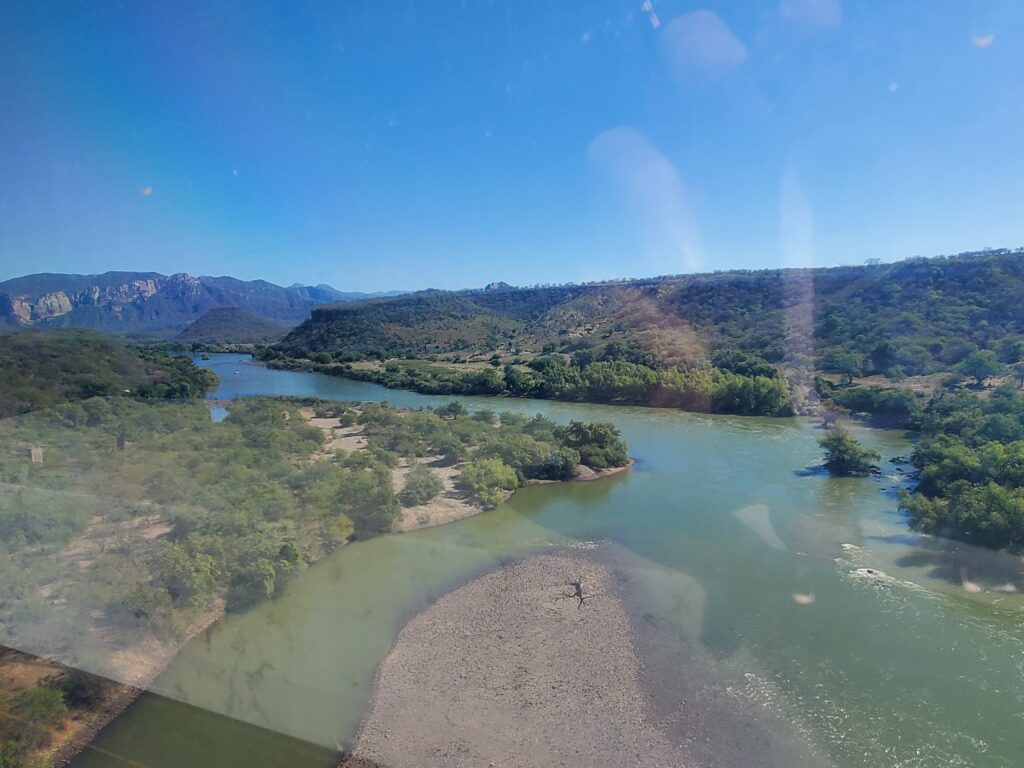 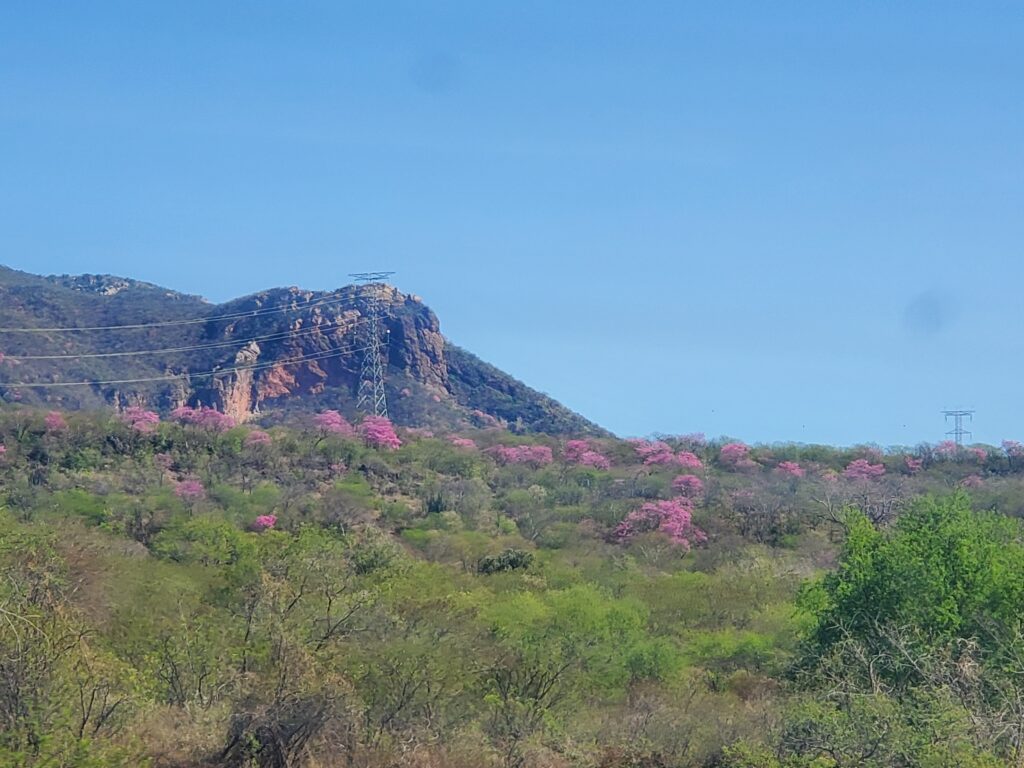 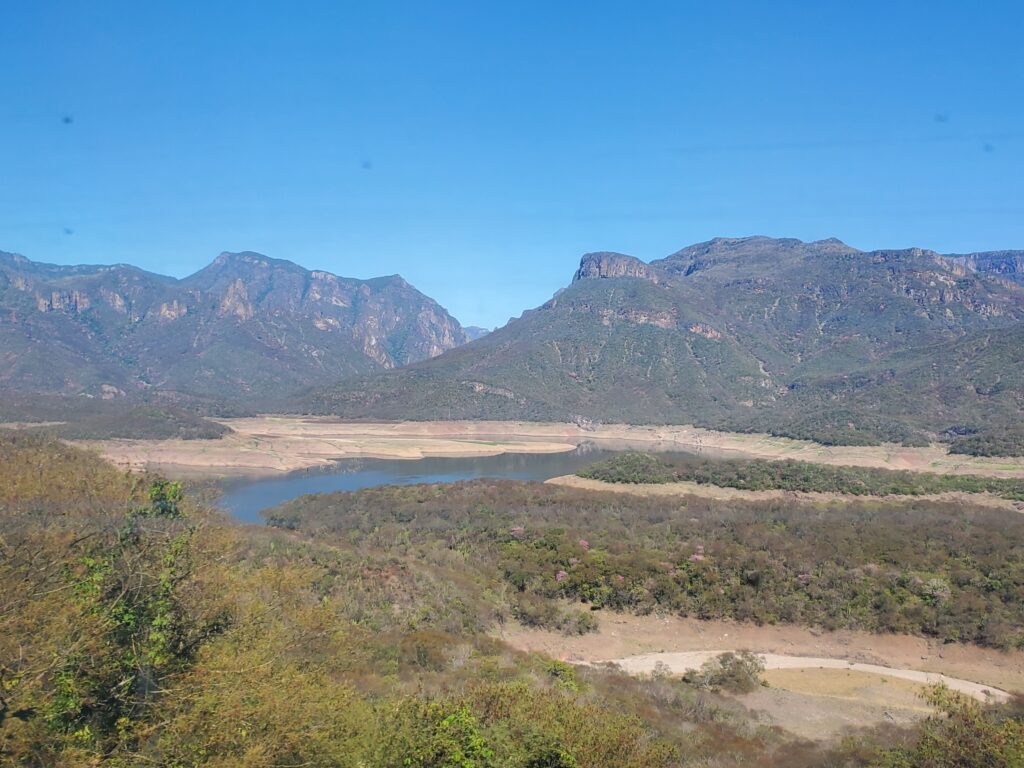 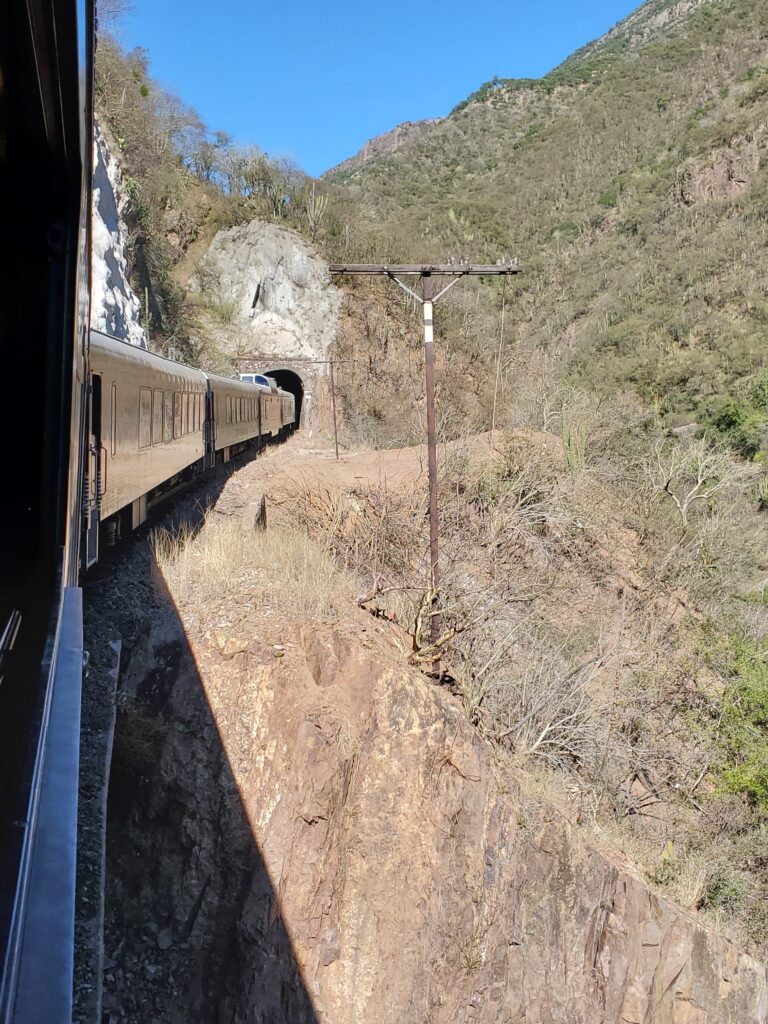 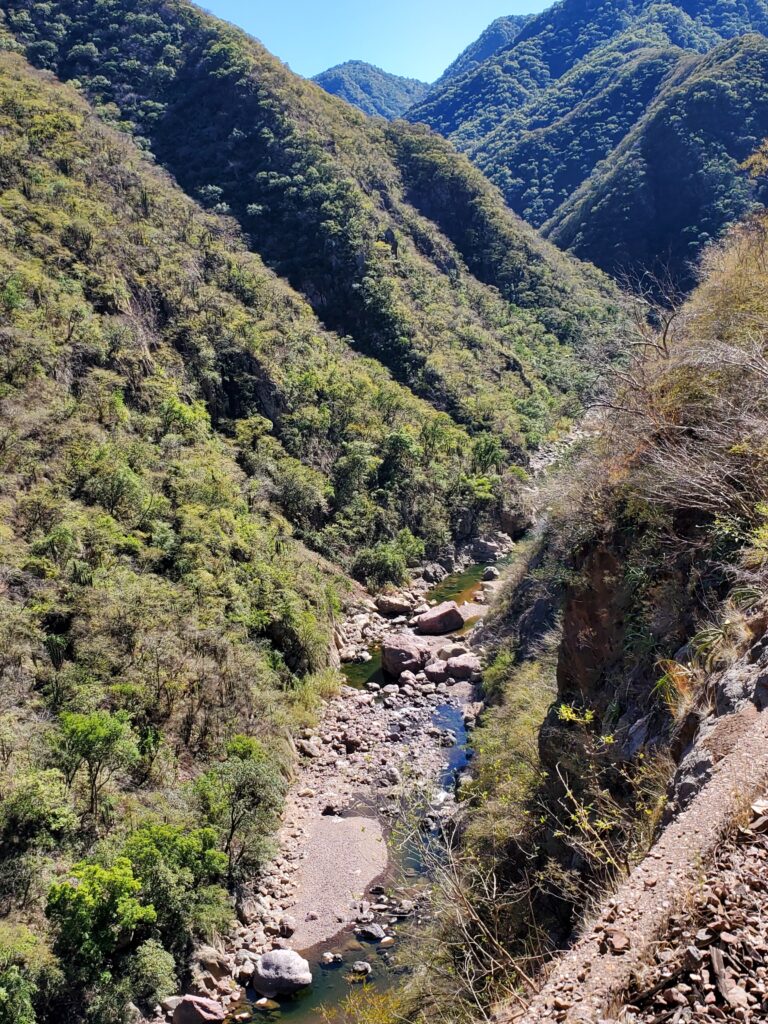 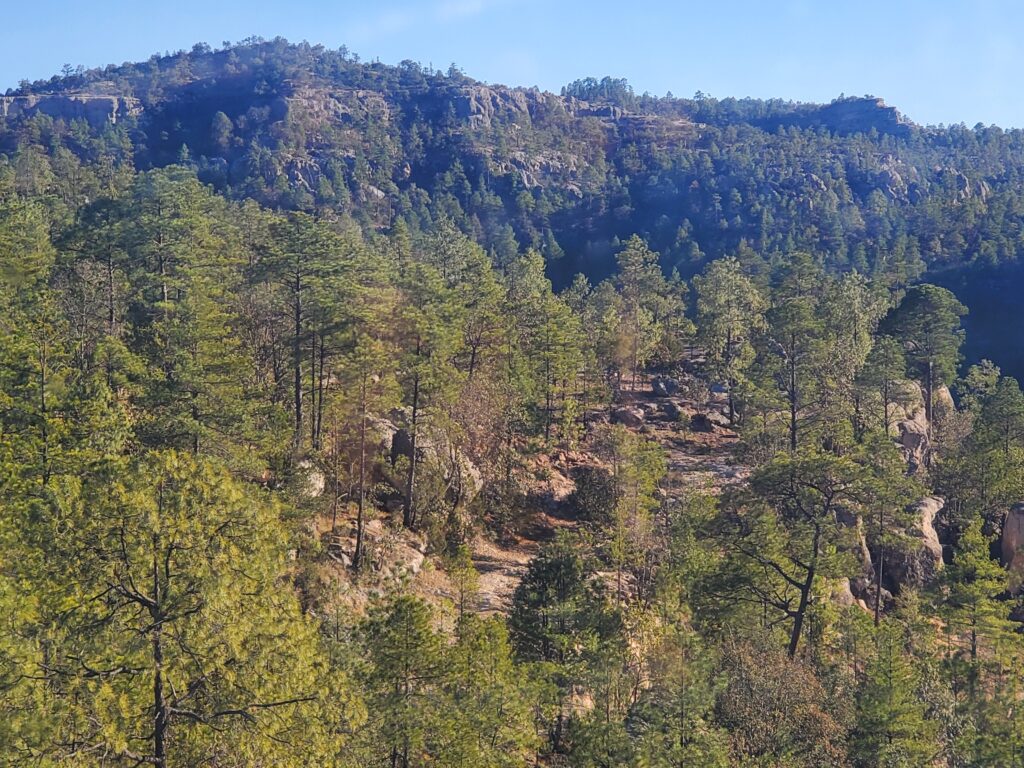 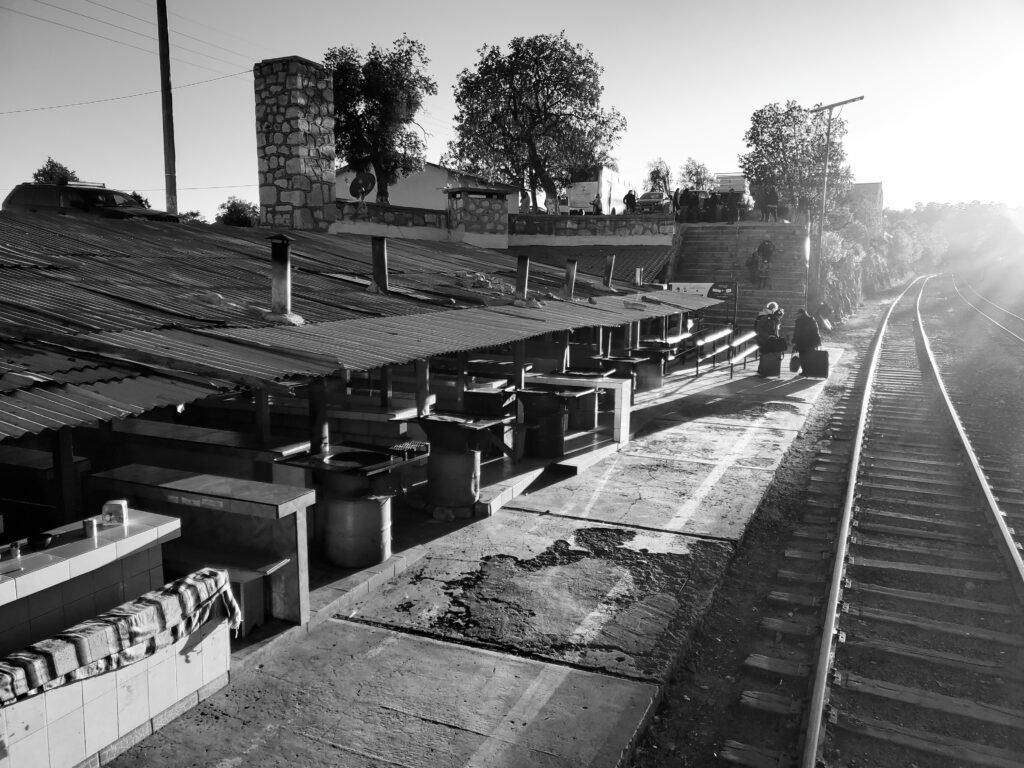 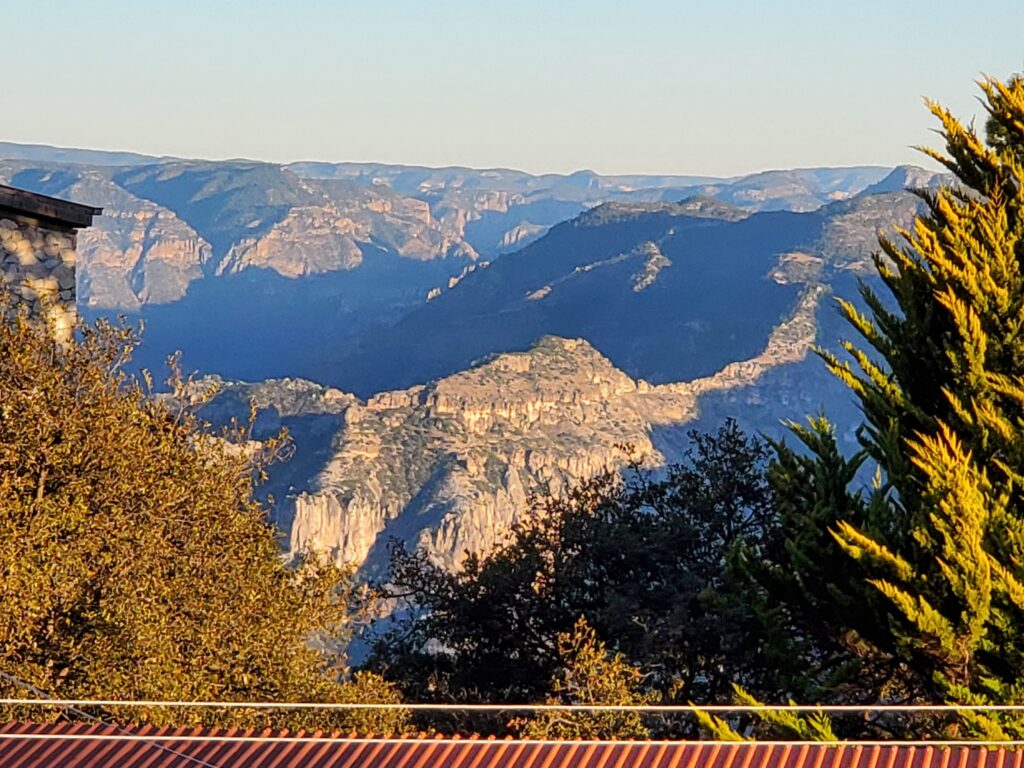 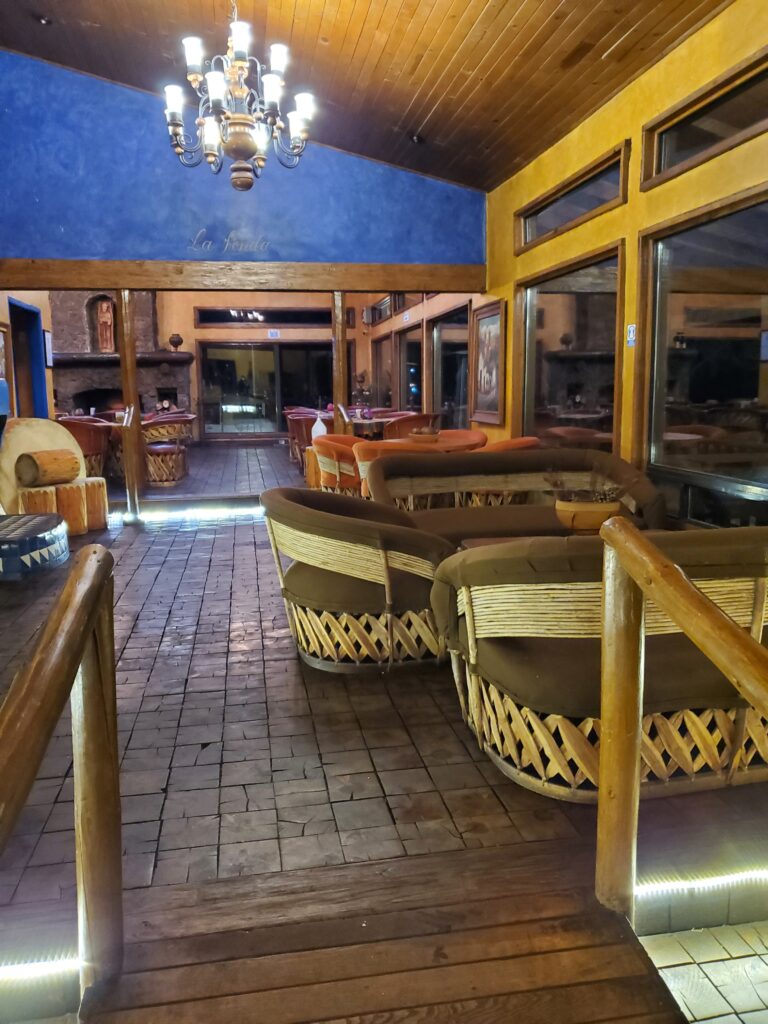 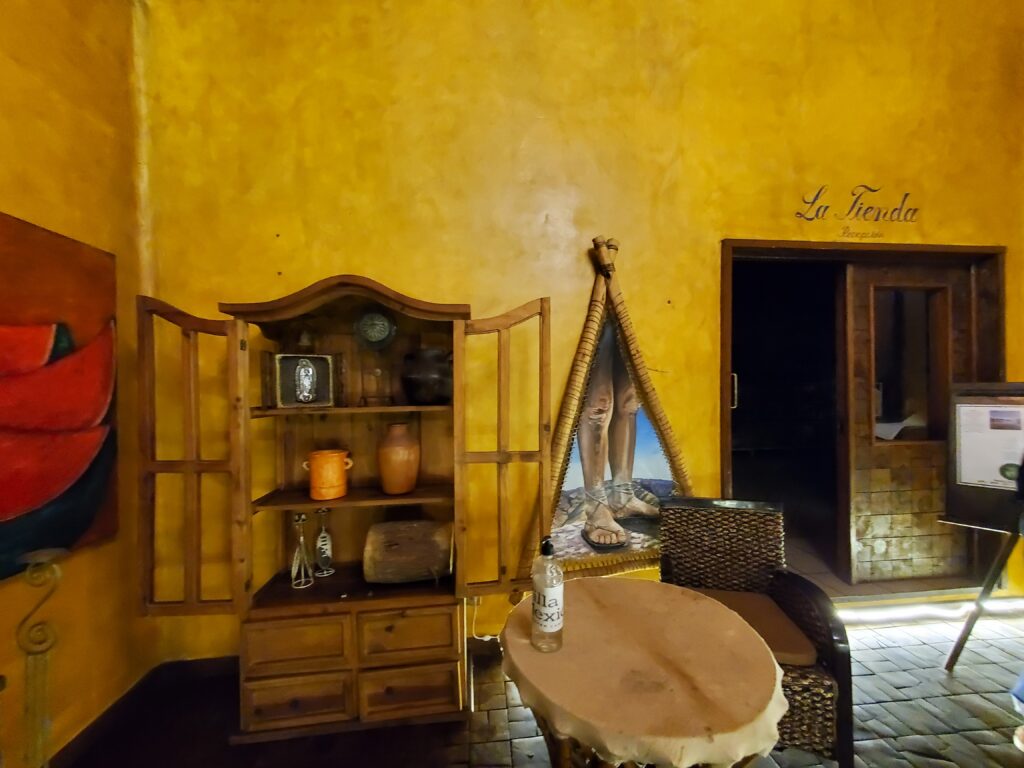 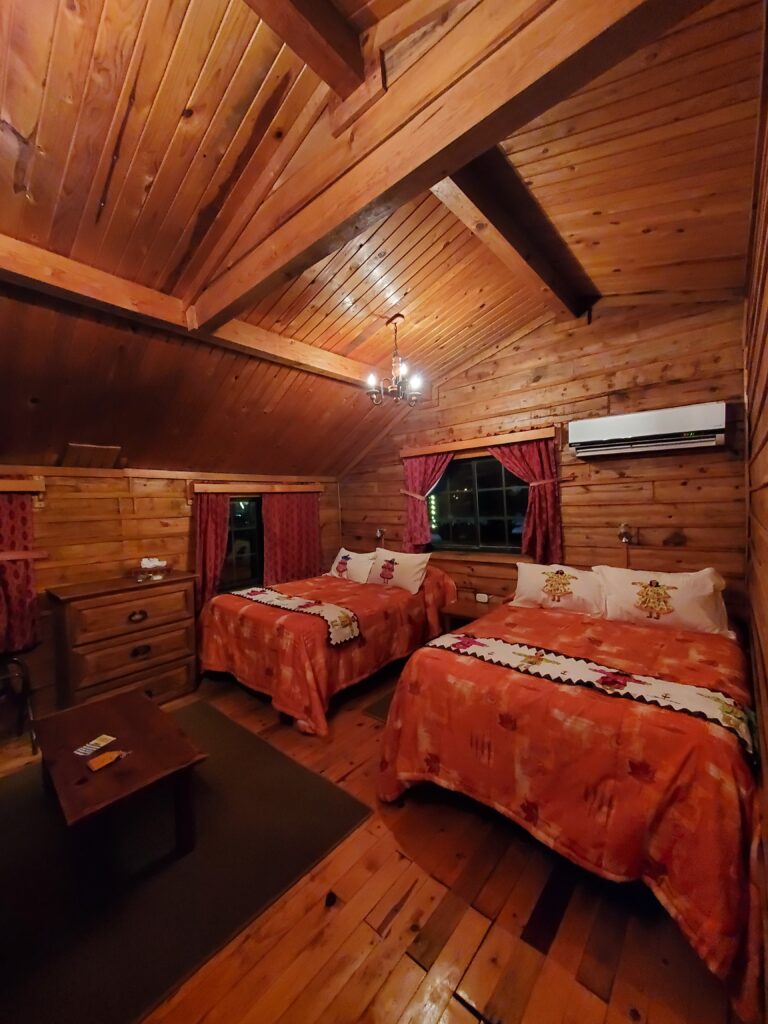 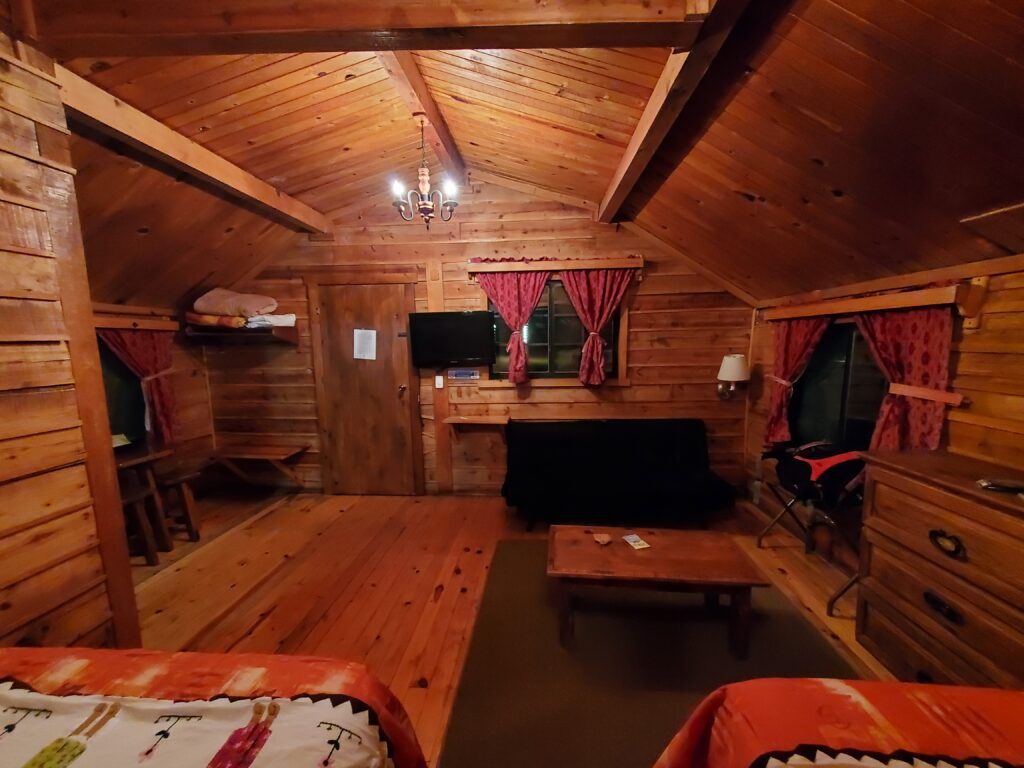 I woke up in the middle of the night wondering why we were so still. Had the boat gone aground? Were we in a boat yard on the hard? Oh, yeah, we were in Creel in a hotel room, our first night sleeping off the boat in months. I rolled over and smiled. When did my mind change and accept motion as normal, stillness not normal? We woke to the alarm while it was still dark outside and it was cold and everything was frosted! Were we back in Montana? We needed to be back to the train depot by 7am, which was too early for the free hot breakfast but they were nice enough to pack us a bag lunch: bologna sandwich, cookies, and an apple. Was Mom in the kitchen? Today we would experience the Tourist Class tickets. 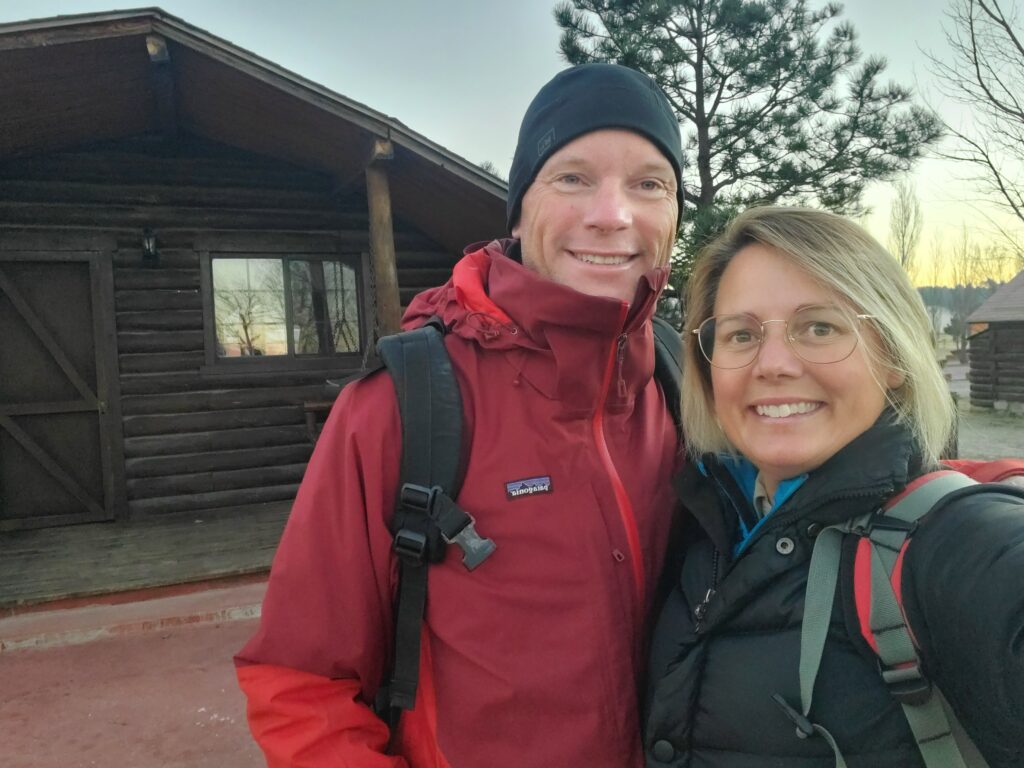 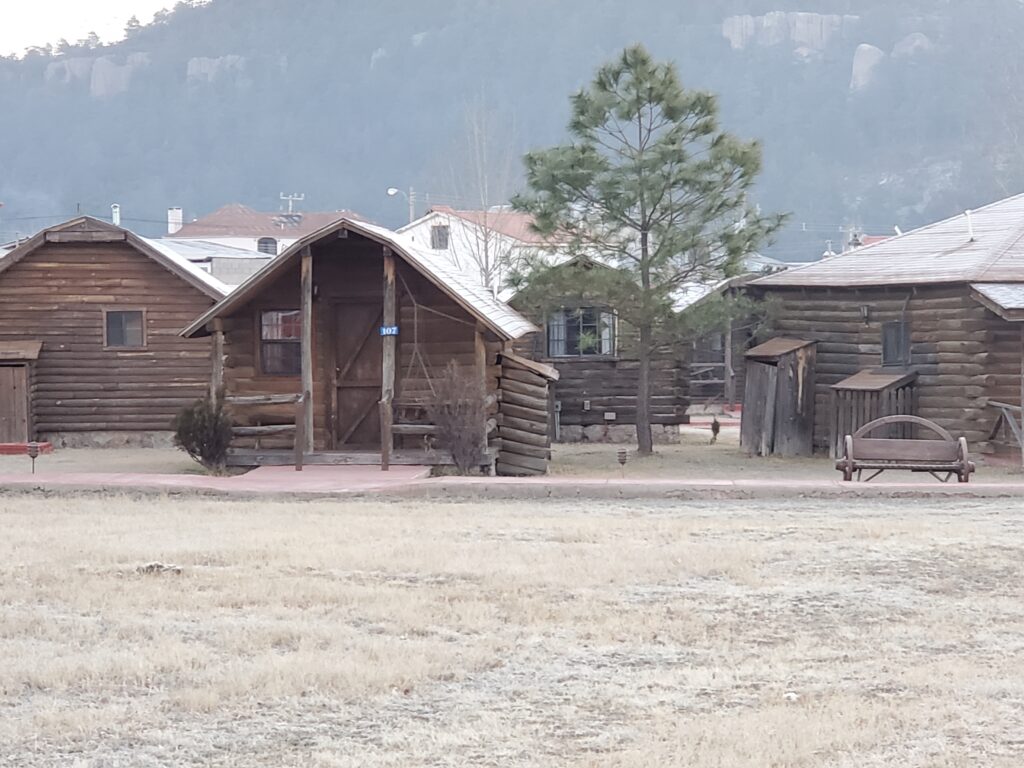 We showed the usher our tickets and he showed us where to sit. The seats were big and comfortable but there was no fold down table and no charging ports for our phones or laptop. Bill had planned to work on some blog posts on the trip home but it wouldn’t be for long without charging! There was air conditioning above our heads. Little did we know how happy we would be to have our winter jackets! We did have access to a dining car with white table cloths but there were no domed windows and no meals were included with Tourist Class tickets. We had breakfast and tried the egg dish, a kind of scramble with tortillas on the side. I thought the food was pretty good on the train. There was no bar to serve tourist class but there was an airplane style cart which made two passes. They ran out of all beverages to serve including water with five hours to go. We ran out of water in our bottles with 3 hours to go and still had our bag lunch to eat. We really couldn’t make it. The usher went looking for water for us. We saw him pass back and forth 3 times alone then twice more with an assistant and finally arrived with four bottles, we bought them all! First Class tickets were higher in price but well worth every extra penny. 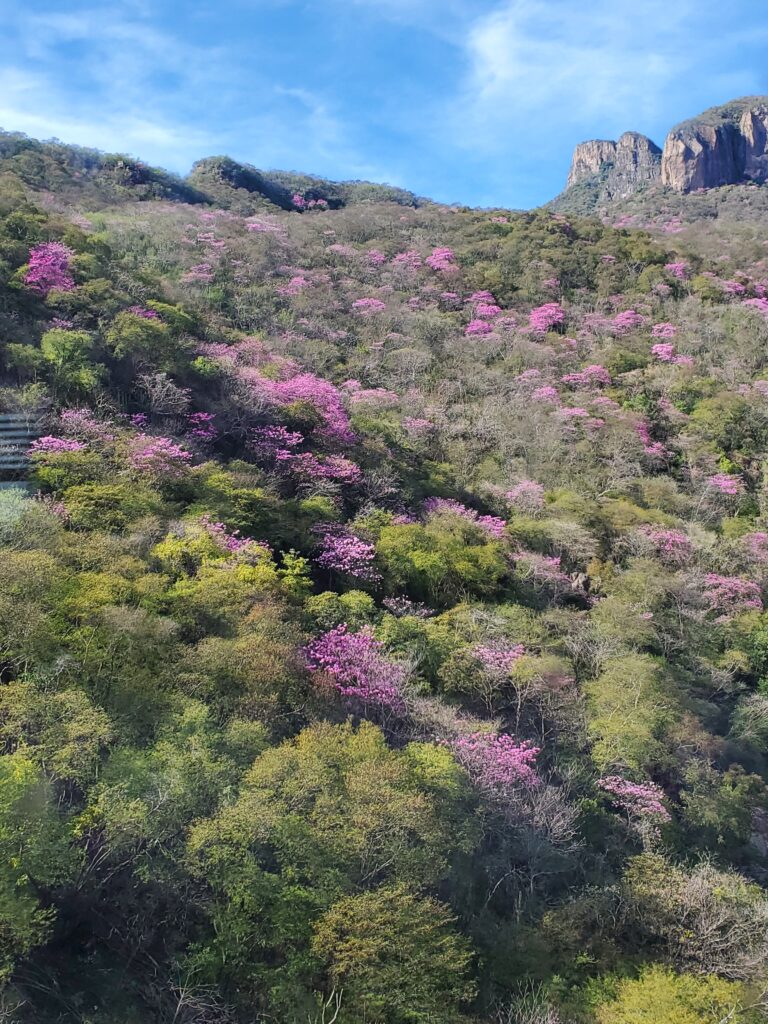 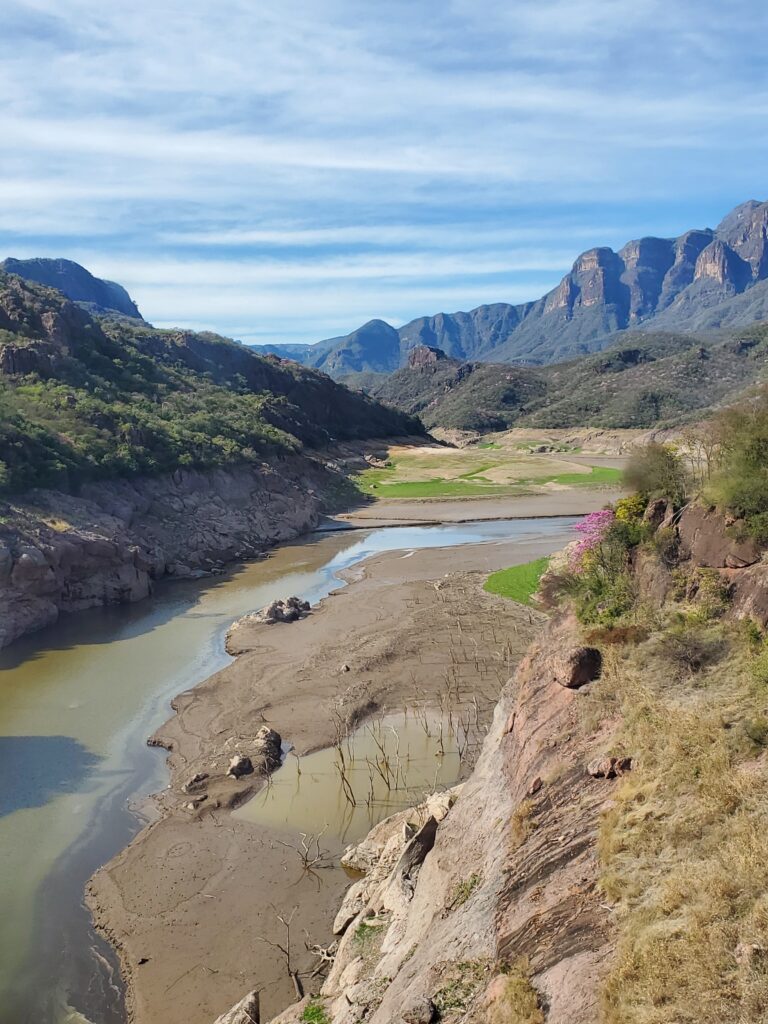 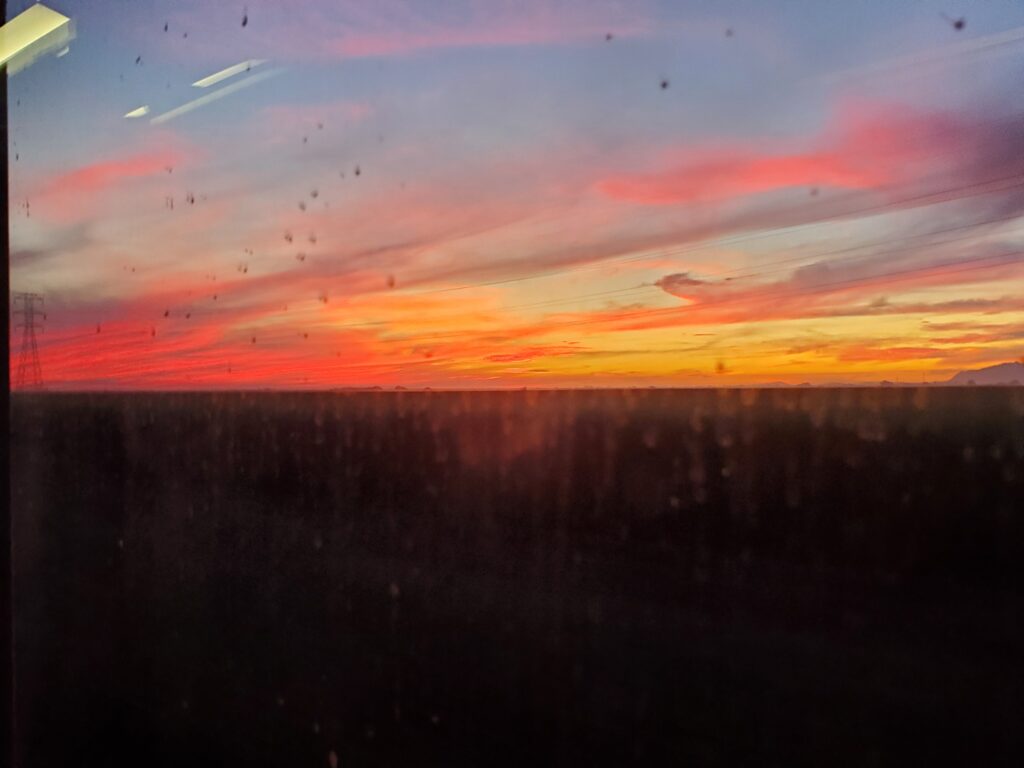 We called our driver as instructed 10 minutes outside of Las Mochis. He was there waiting when we exited the depot in the dark. What a wonderful trip! So many memories made. But, we were happy to be going home to Sacagawea. Javier wanted to hear all about our trip because it was on his bucket list. We described the train cars, the views, and the difference between First Class and Tourist Class tickets. He said he would do it this year! Javier let us know that the divers had been at the boat for the zincs and cleaning. He also said that our friends on Tits Pierre were at the dock and asking about us. We found them on our arrival wondering if we would lead them out through the channel because we all needed to leave by 4:00 am to time our arrival to Mazatlan correctly. They had some trouble in the confusing channel to the marina and had gone aground briefly on the way in. They did not want to repeat the episode in the pre-dawn darkness. We had a safely passed through and would be happy to lead the way out the next morning, January 26th, following the track on our chartplotter. Nelson made it possible for us to check out that evening and we were all set! Hasta manana!