The Northern Channel Islands are located about 25 miles off the coast and we are going! Not many sailors make the trek out to these uninhabited jewels. I have been reading about these National Park Islands for months and I am so excited! We planned to visit 3 of the islands: San Miguel, Santa Rosa, and Santa Cruz. From Morro Bay, we needed to head about 100 miles south then turn off shore for 25 miles. There is one place to stop for an overnight, Cojo Anchorage, just around the corner of our final dangerous cape on the Pacific coast, Point Conception. Some call it the Cape Horn of the Pacific. It can be dicey! Supposedly, once we pass south of this landmark, the topography changes abruptly from fog and rocky shores to sand beaches and warmer weather. We checked and rechecked the weather and the distance, calculated and recalculated the time to allow passing the cape in day light. Also, we referenced and cross referenced the tide tables because we had to go out of Morro Bay at slack or close to the outgoing tide to avoid dangerous sea conditions as we exit the protection of the bay. The wind storm was over, the tides are good to leave at 6:00. The next morning, at 5:30 am we rechecked the weather, still good, we called the Harbor Master at 6:00 to check the status of the bay’s entrance. We got a good report. Bill and I looked at each other, paused for a second or two, “Let’s do it!” up anchor, and here we go!!! The pre-dawn light was just enough to help us through the channel back out to the ocean and swells. Oh boy! There were swells and waves and currents. We throttled up the good old Yanmar 75 and pushed our way through. Once we got into deeper water, the seas were quite manageable, whew! We settled in for a long day. You would think we could be productive during the 11 hours. Read, write a blog post, clean, practice Spanish…..somehow it never happens. Maybe in the months ahead that will change but for now, I can’t get enough of watching the world slowly rolling by. 60 miles later, we passed Cape Conception and the sea was kind, mild waves and 15 knot winds. The direction of the swell and waves changed but not the size and there were no gusts pouring off the cape like so many other sailors have experienced. Yay! 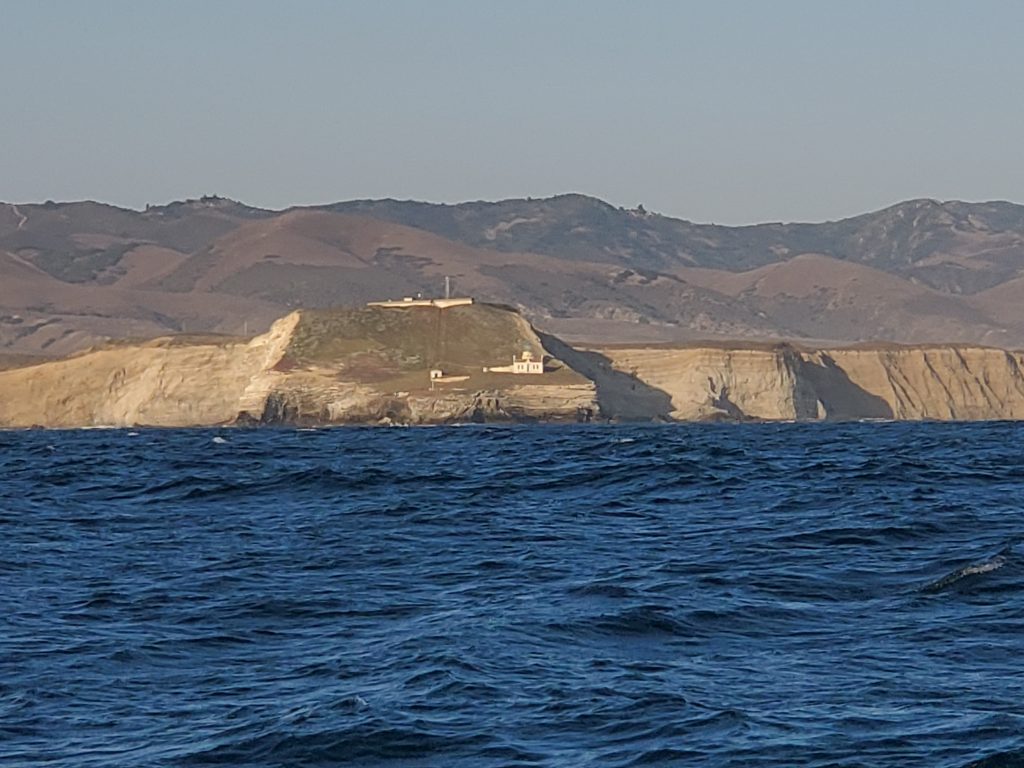 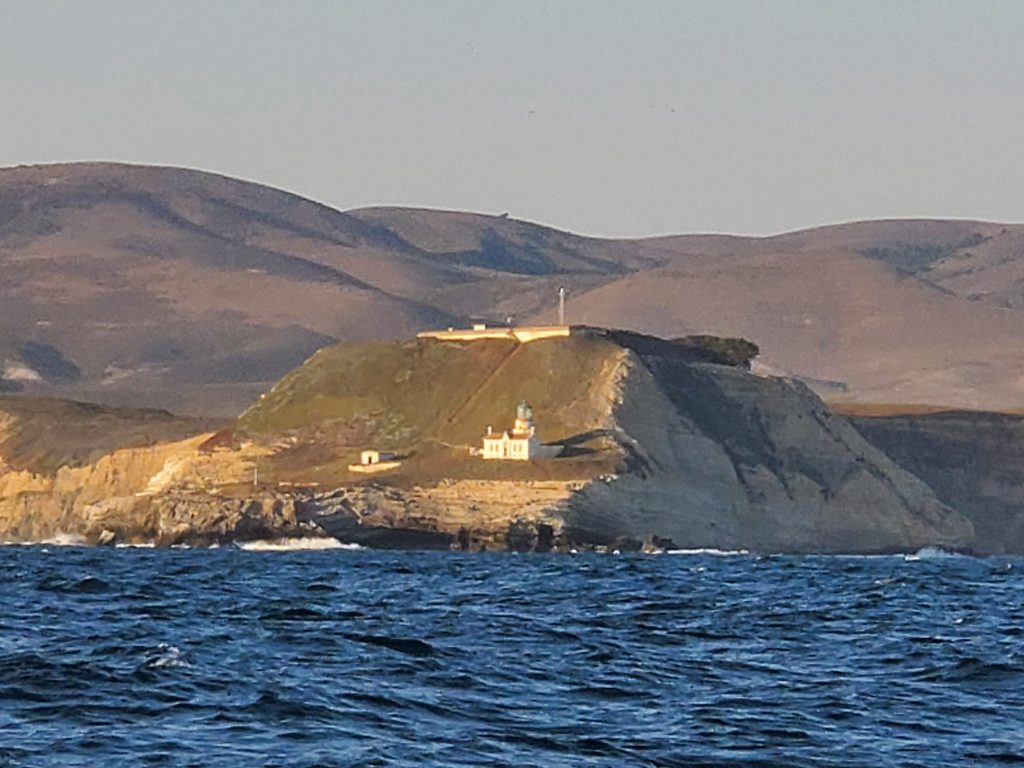 Ten miles later just as the sun was going orange, we came into the Cojo Anchorage. The area was large but the kelp limited the available spots to drop the anchor. Additionally there was a crabby old man in a nearby boat yelling at us to stay away. This was our first negative encounter with a cruiser. We managed to find a spot and Bill kept his middle finger down and his cursing inside the cockpit, impressive!
In the morning Crabby went north and we went south never to meet again, good! Cojo Anchorage was quite pretty in the morning sun. 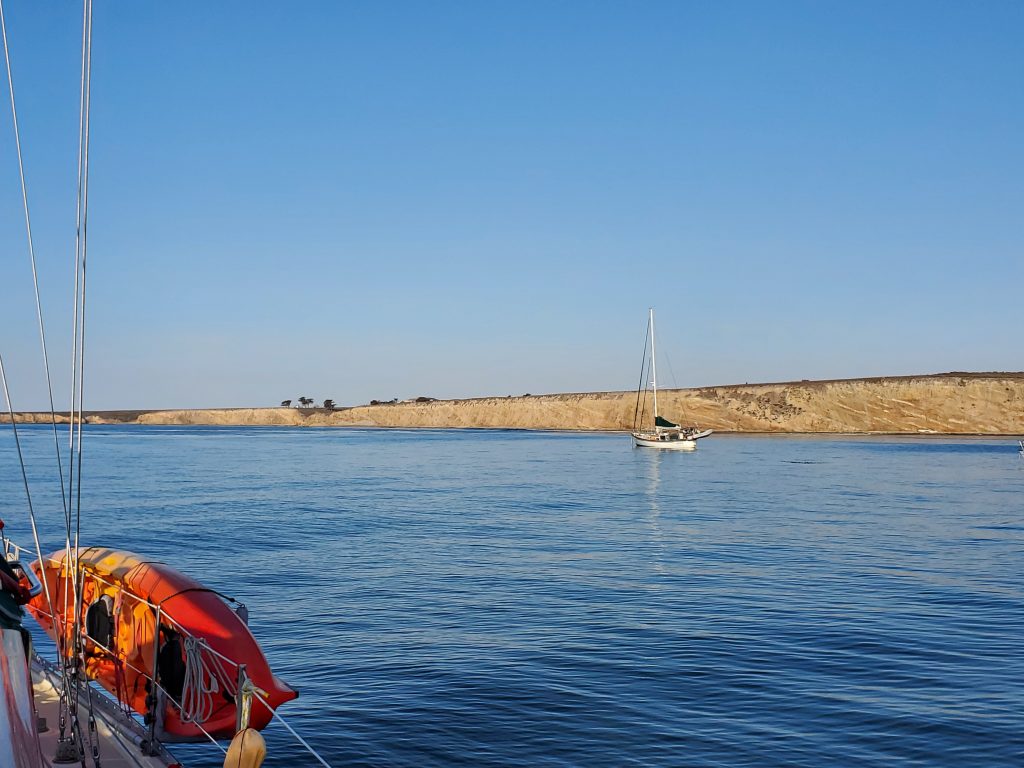 We headed away from the mainland toward an island still not visible to us but it was on the map and we were headed right for it. Cuyler Cove on San Miguel Island was our destination. This is one of the main breeding sites for Elephant seals. At this time of year there would only be females and juveniles present because the adult males migrate 800 miles to Alaska twice a year and wouldn’t be back until December. It was windy as we pulled into the bay but there were no waves, perfect conditions for the kite boarder who was staying on the only other boat in the anchorage. According to our guidebooks, it was safe to anchor right in close to the cliffs so we did and escaped the worst of the wind. Kayaking would have to wait until morning. Looking around the bay, we noticed some really tall palm trees, the tallest I have ever seen, just one cluster. I wondered how they got there, they looked lost. 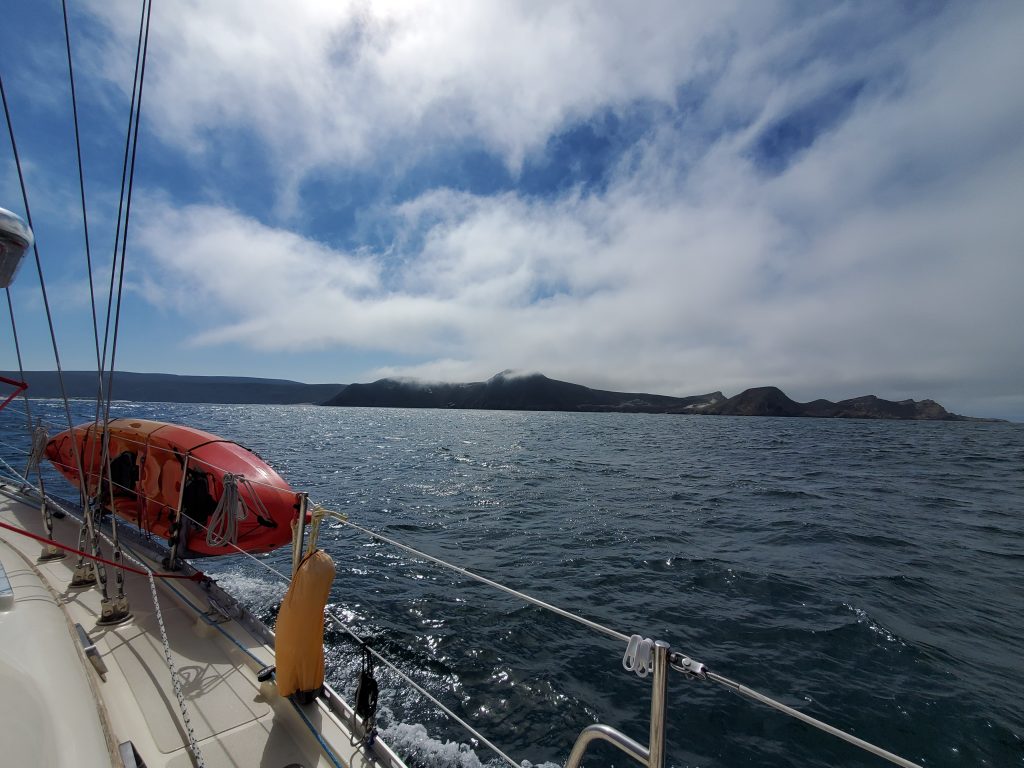 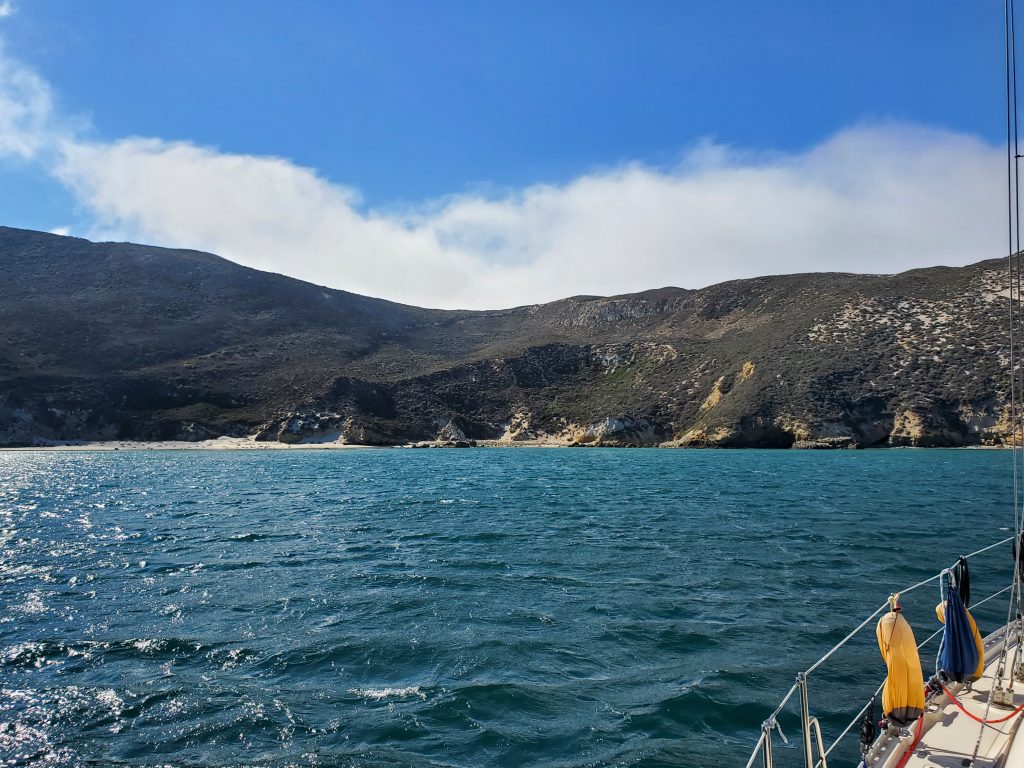 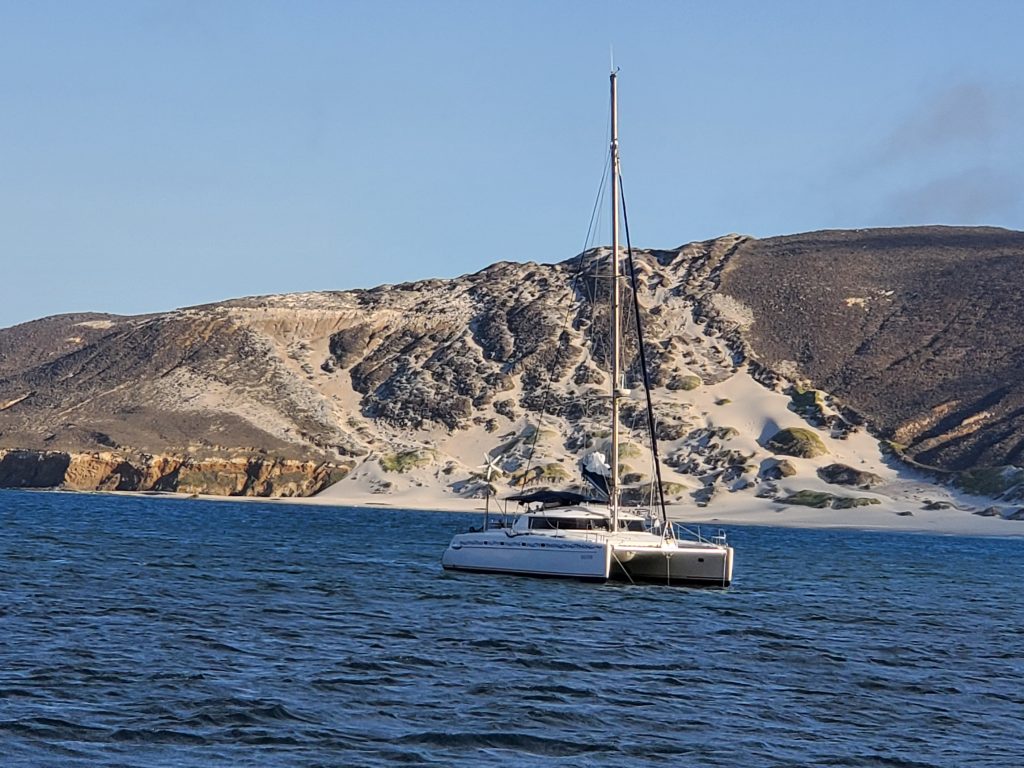 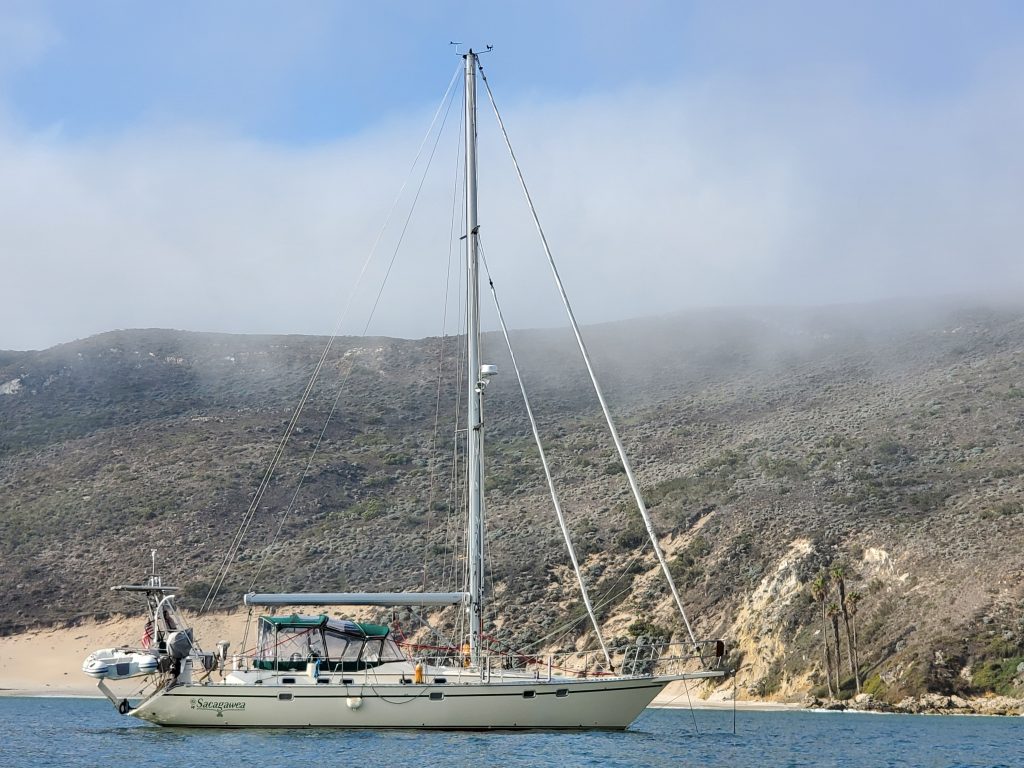 The next morning was dead calm and silent. A fog had rolled in overnight and it hung overhead just out of reach of the mast. We lowered the Kayak from the rail and started paddling. As we went around the bay, the sun slowly burned off the fog allowing the sun to warm the air. 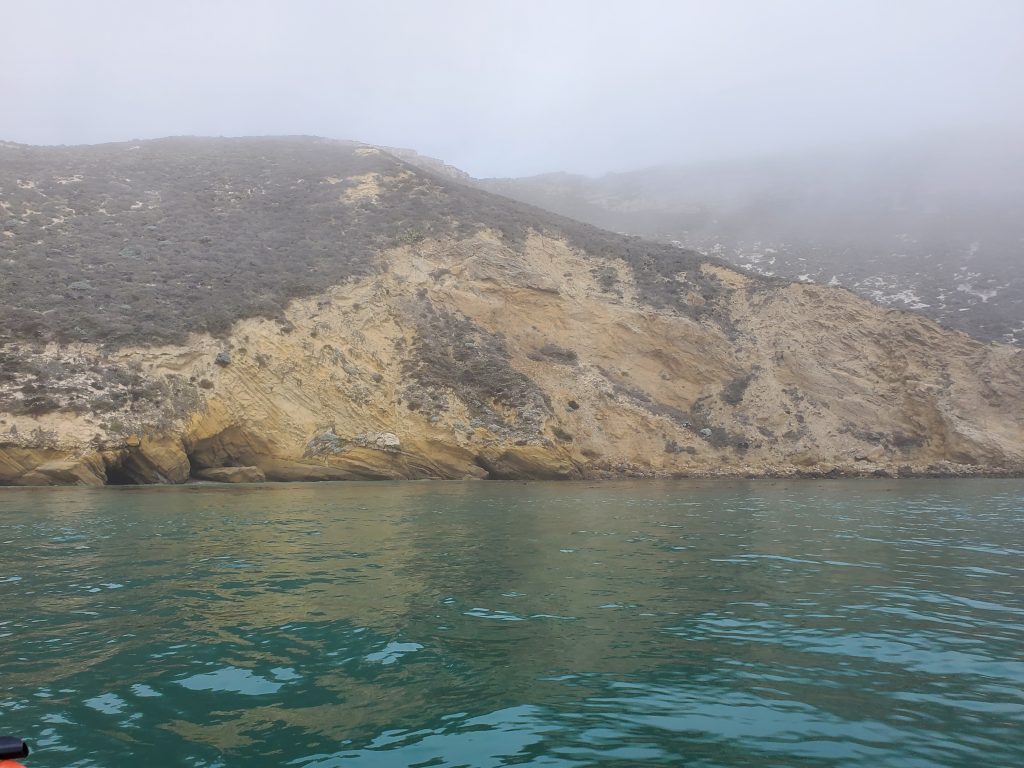 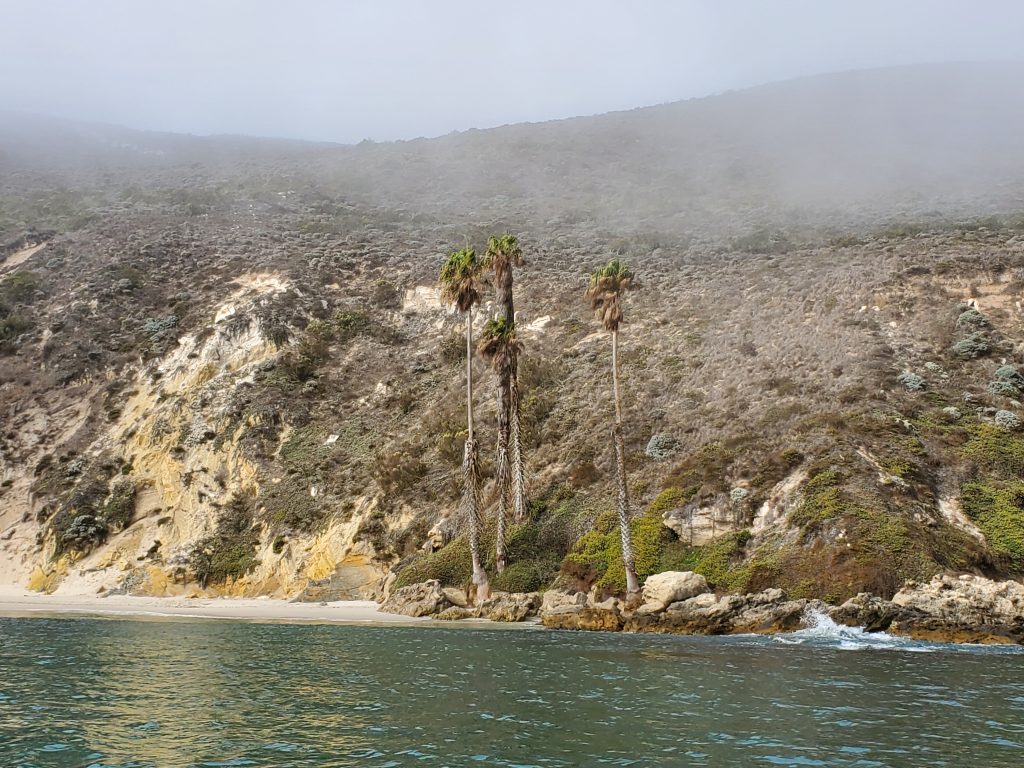 We had a fabulous time watching the Elephant seals and Harbor seals. One cute little guy was really curious about us. We noticed him about ten yards away and he dipped under and surfaced about 8 yards away. We watched him watching us, dipping down then coming up again a bit closer each time like a game of red light green light. We decided we better move along when he got close enough to see his whiskers and we became concerned he might nibble on our paddles, or possibly something else. They are cute, curious, and while not huge like the Elephant seals, still quite large! There were young elephant seals all along the beach lying in the sand. Some were tossing sand on themselves, most were just sleeping, but a few managed to gather up enough energy to wiggle like a giant inchworm across the sand. They would go until apparently, the energy was gone and then just flop and take a rest until more energy was gathered to go a bit further. It was really entertaining! 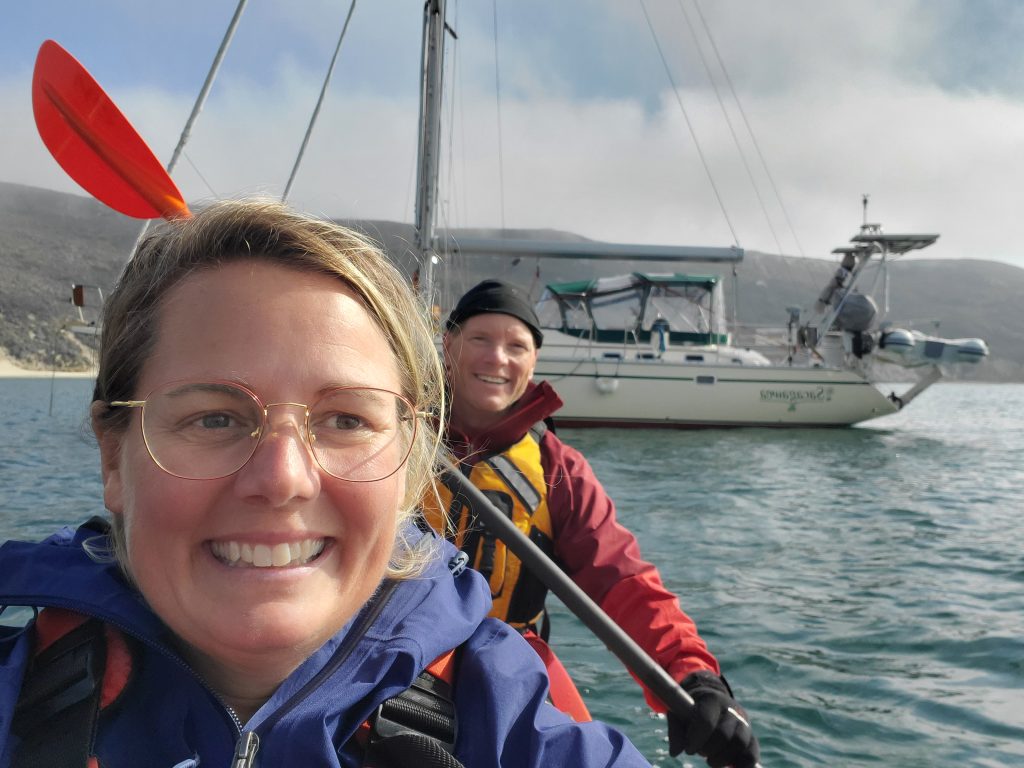 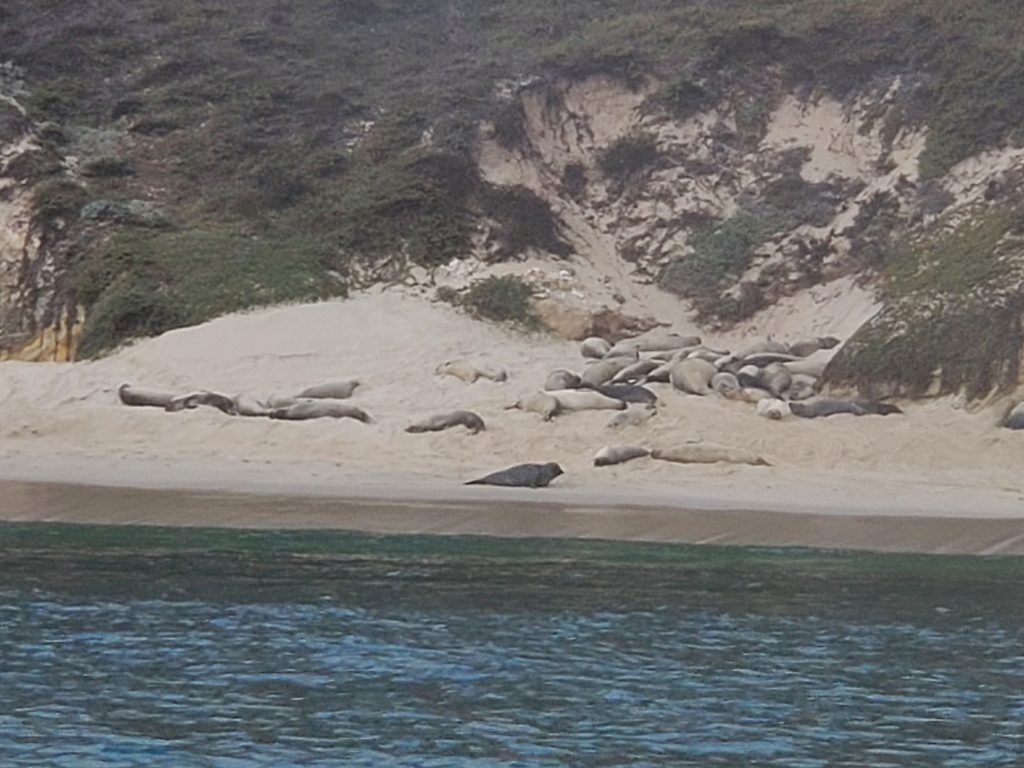 Time to go! There is more to explore! Bechers Cove on Santa Rosa was next. We motored out of the anchorage into some perfect sailing wind, yay! Sails up and motor off, so peaceful. The wind took a break right after lunch so we motored the rest of the way, passing hundreds of Pacific Whiteside Dolphins along the way. When we entered Bechers Cove the wind kicked up to 25 and the beach looked too rough to safely get ashore. We stayed on the boat and watched flocks of pelicans come in for the night. The family on the boat named Simplicity anchored next to us came over and we made new friends. They are also planning to head south to Mexico. We made plans to go together and see Painted Cave on Santa Cruz Island. This cave is the biggest sea cave in North America! Bechers was not the best anchorage, a bit rolly, but we got some decent sleep. 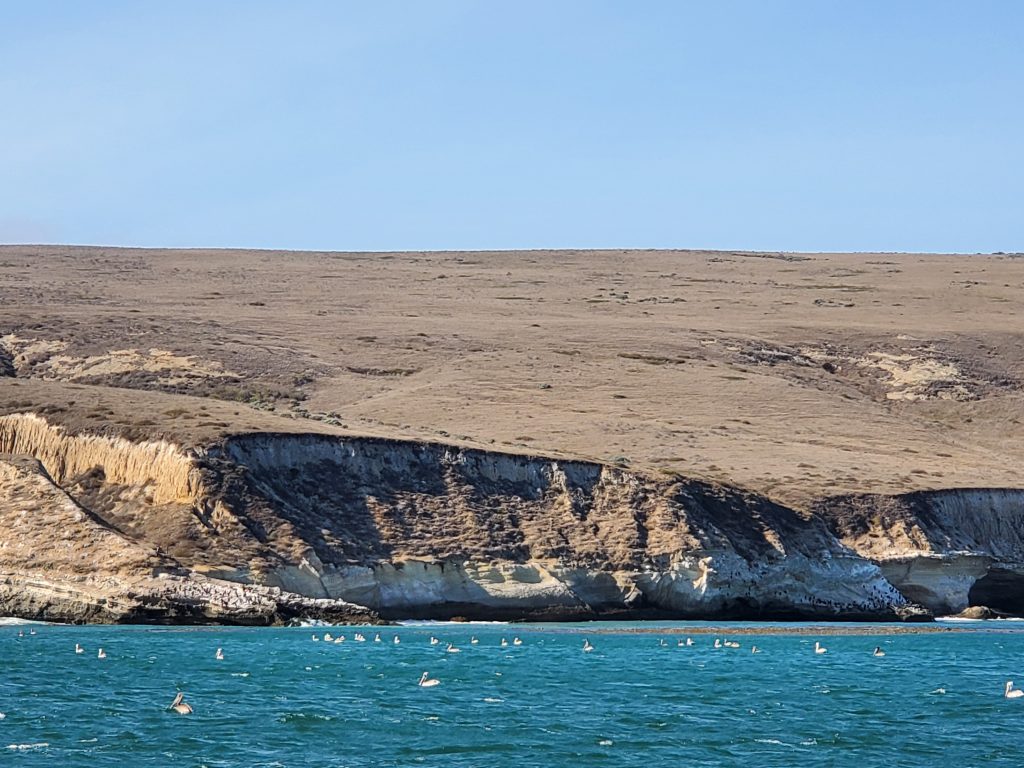 Anchors up and we are off! Sunny, warm, and wind! It was fun to sail with another boat. 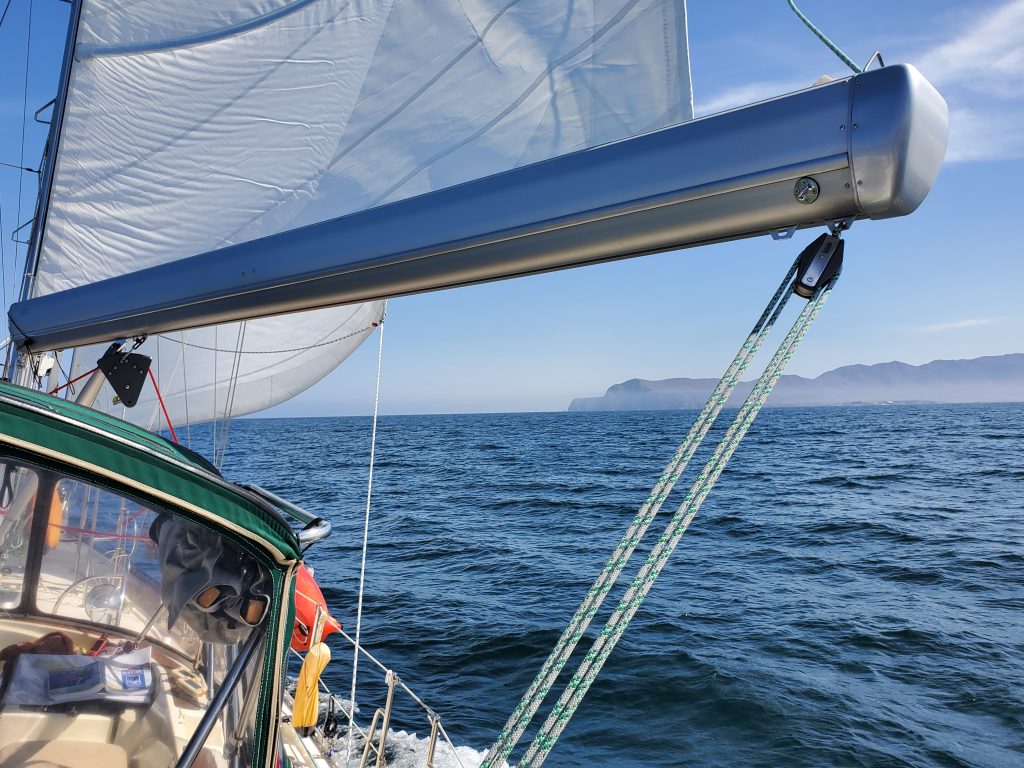 We anchored at Cueva Valdez. It was just a small indent in the steep cliff shoreline. Protection from wind and waves was provided by rock formations. We decided it would be fine for our cave expedition but not enough for overnight. 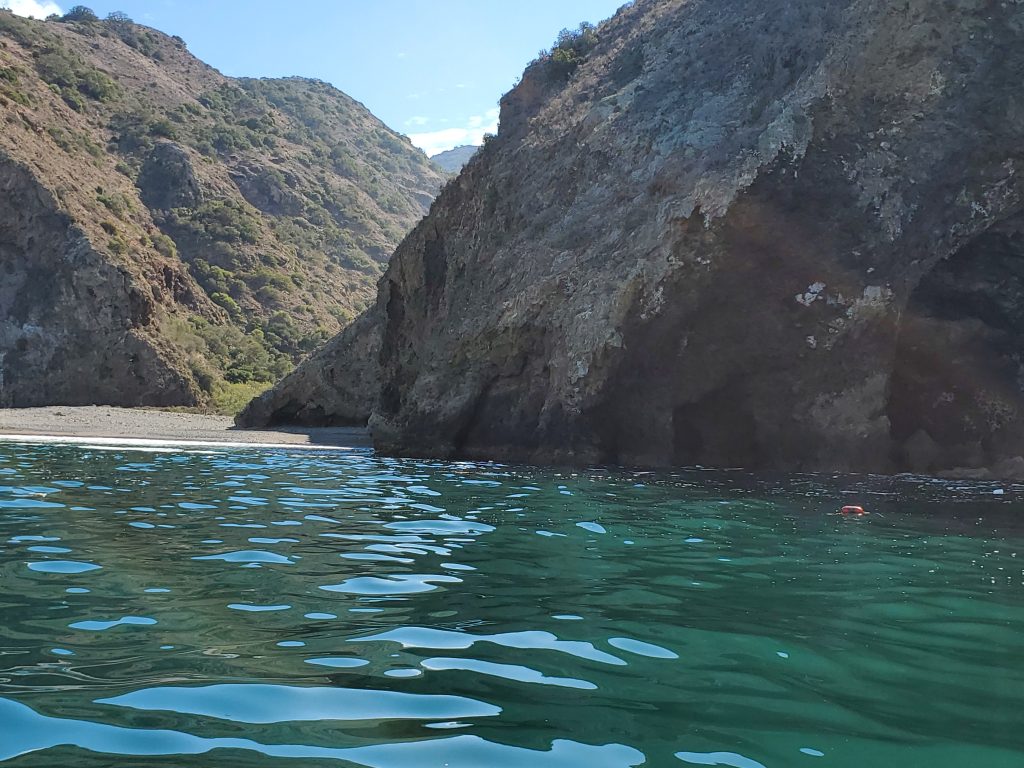 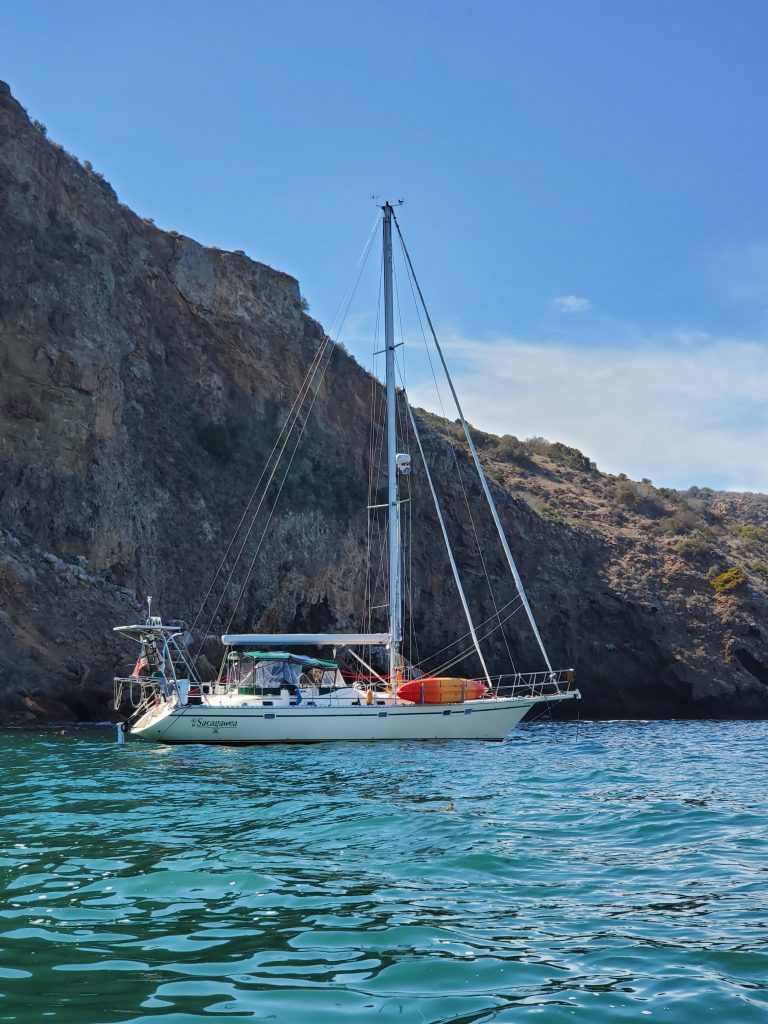 The Cave was 3 miles west of this little anchorage. We watched a couple leave in their dinghy and return less than 10 minutes later. We asked what happened and they said it was too rough! We already had our dinghy in the water with the motor on, so we decided to give it a go anyway. We had the latitude and longitude of the entrance and our tablet with the map loaded. Off we went! It was rough! Bill rode the swells like we were on a surf board and our friends from Simplicity did the same. We found the cave! It was like approaching the mouth of a sleeping dinosaur. The swell of the ocean slowly rising then lowering looked like breathing, vapors emanating from the entrance. We slowly approached the cave, got spooked because with the tide high there wasn’t enough headroom to get inside, and darted out laughing at ourselves. We caught our breath and went for another look further in this time, got spooked and darted out again! Bill and I looked at each other and said in concert, “One more time!” This time we stayed longer and we were able to take in the beauty. There were striations of colored rock purple, green, and gold and small ferns and lichens grew on the walls adding even more color. There is no way a photo can capture the magnitude of the 120 foot tall entrance or the swell of the ocean. It was an awesome sight. 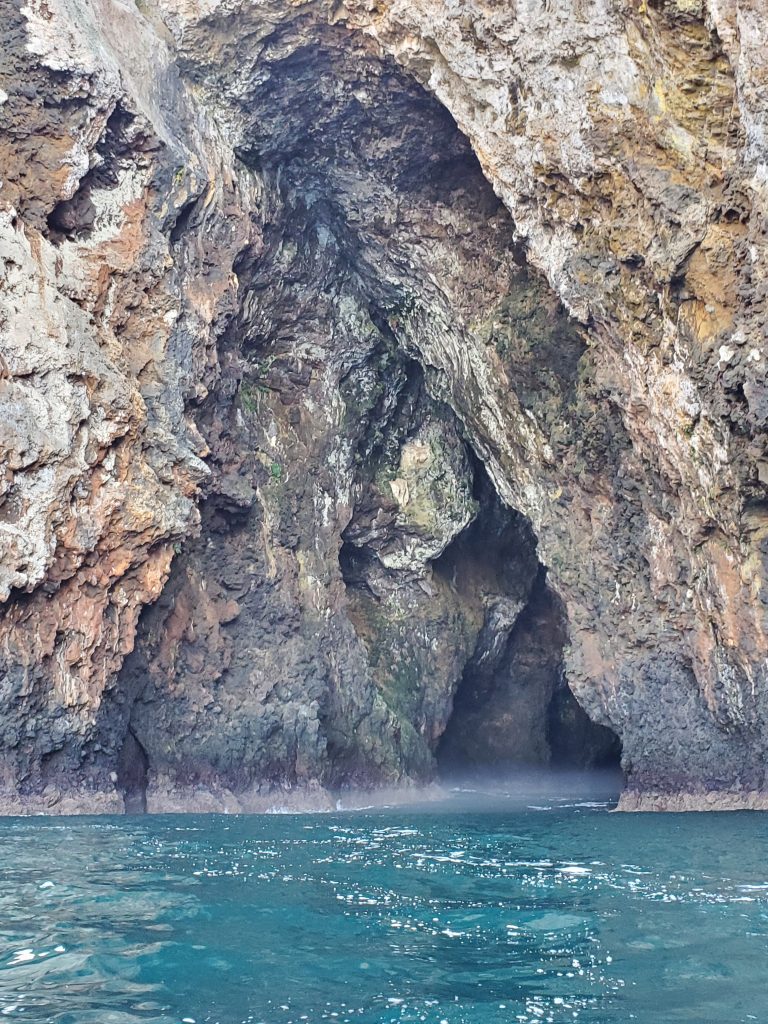 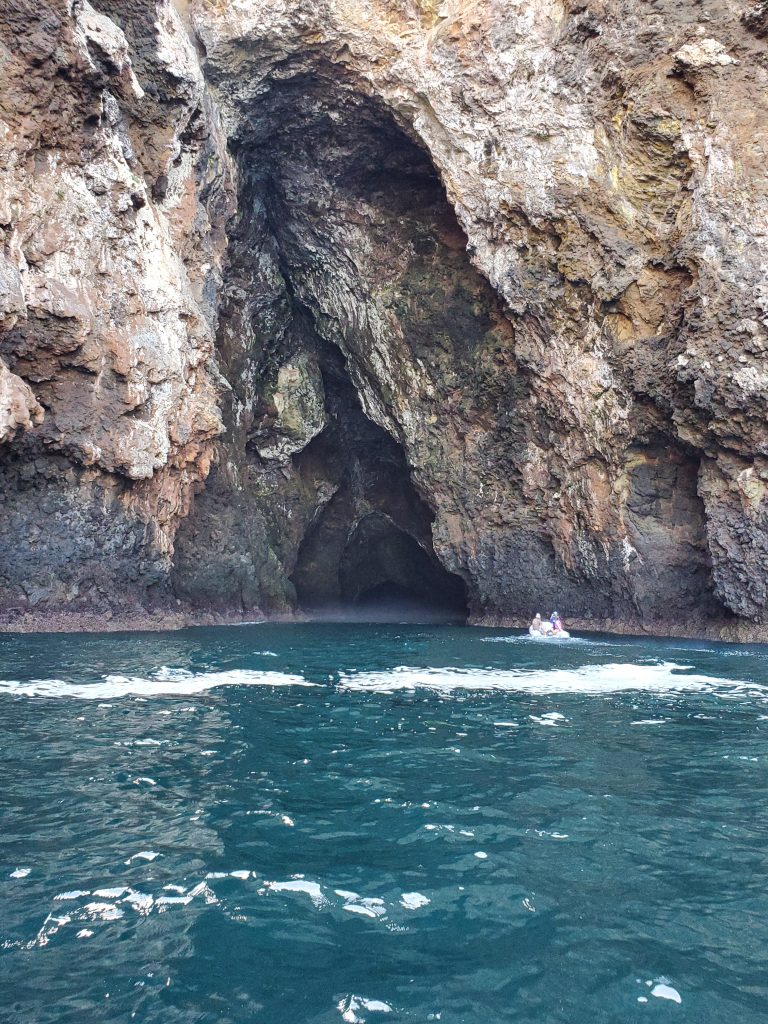 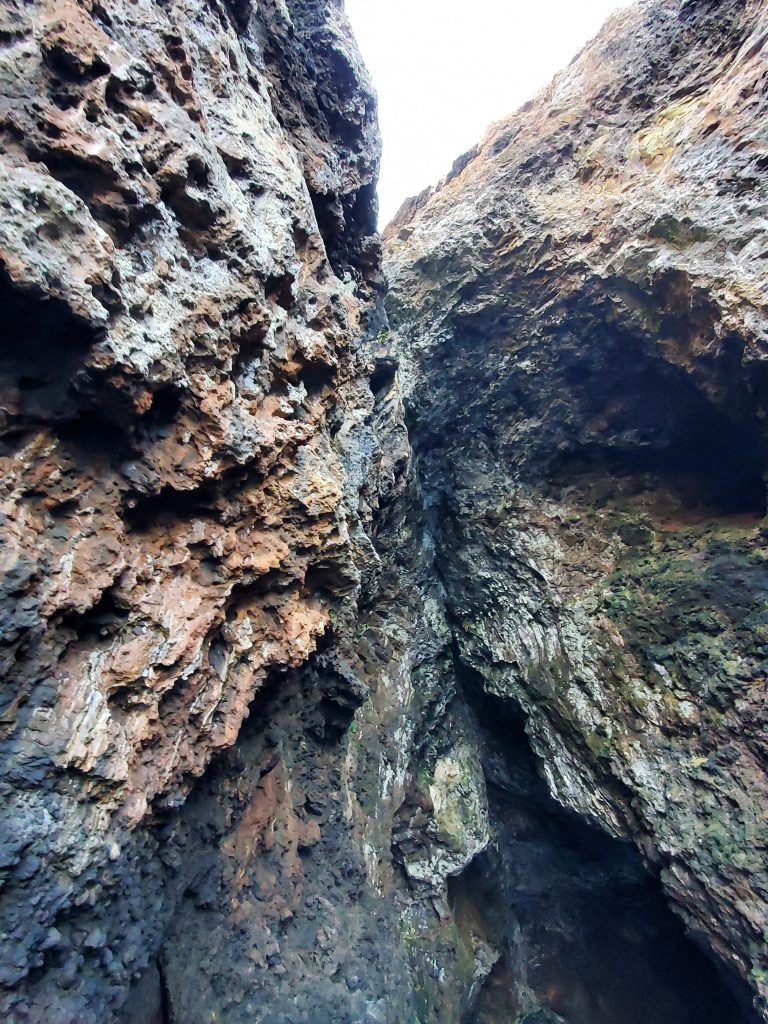 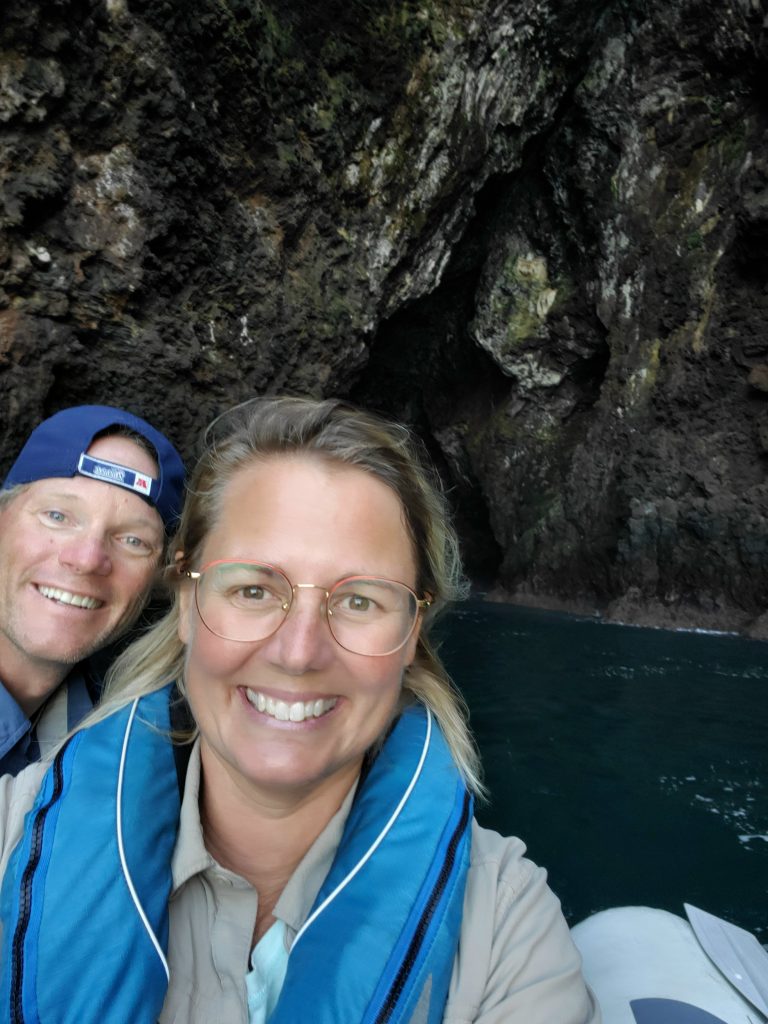 Back to the boats! We decided to move to Fry’s Harbor where a couple of boats from Seattle were moored. It was a tight anchorage but a motor boat was leaving so we were able to take that spot. We put down 2 anchors, one from the bow and another from the stern to keep us in position and avoid swinging into the other boats. We grabbed a couple of beers and the dinghy and floated from one boat to the next catching up with people and hearing stories of their big sail from Seattle to San Francisco. Fun! The night was topped off by a Ukulele concert and amazing bioluminescence. Could it get any better? 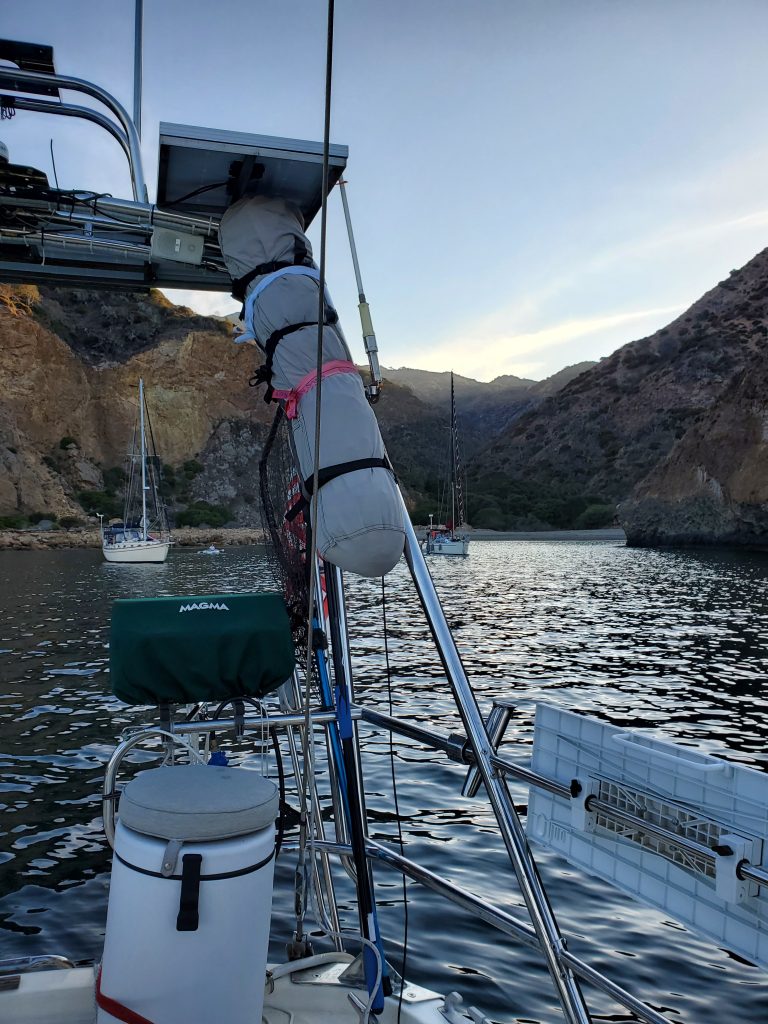 In the morning we said see ya later to our friends and headed to the other side of Santa Cruz Island to Little Scorpion Harbor. Simplicity continued on with us and we met another Seattle boat! We got ourselves settled, dropped the kayak in and paddled to the beach for a hike. We hiked up to the top of the cliffs overlooking the anchorage, saw a hawk, and a fox! It felt good to stretch our legs and lungs! We had to cut the hike short because we saw a storm heading in with thunderheads. We paddled like crazy with wind whipping up and waves building. Apparently lightning storms are rare in California because people were talking about it like it was front page news! I can say that sitting in a boat with a 63 foot tall metal mast was nerve racking! It was an epic event that lasted from 5:30 in the evening until 2:30 in the morning, and all the boats in the anchorage had to keep anchor watches all night with the shifting winds from the storm cells. Not much rest, but amazing weather to witness. Tomorrow we say good bye to the Northern Channel Islands and head to Santa Barbara. 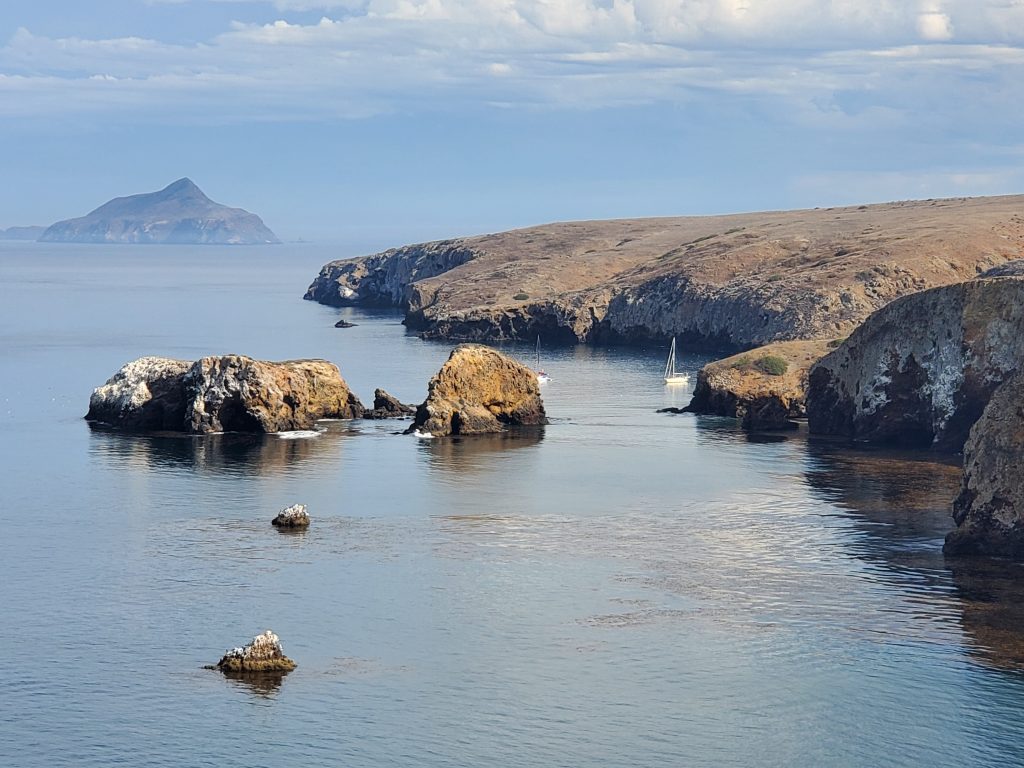 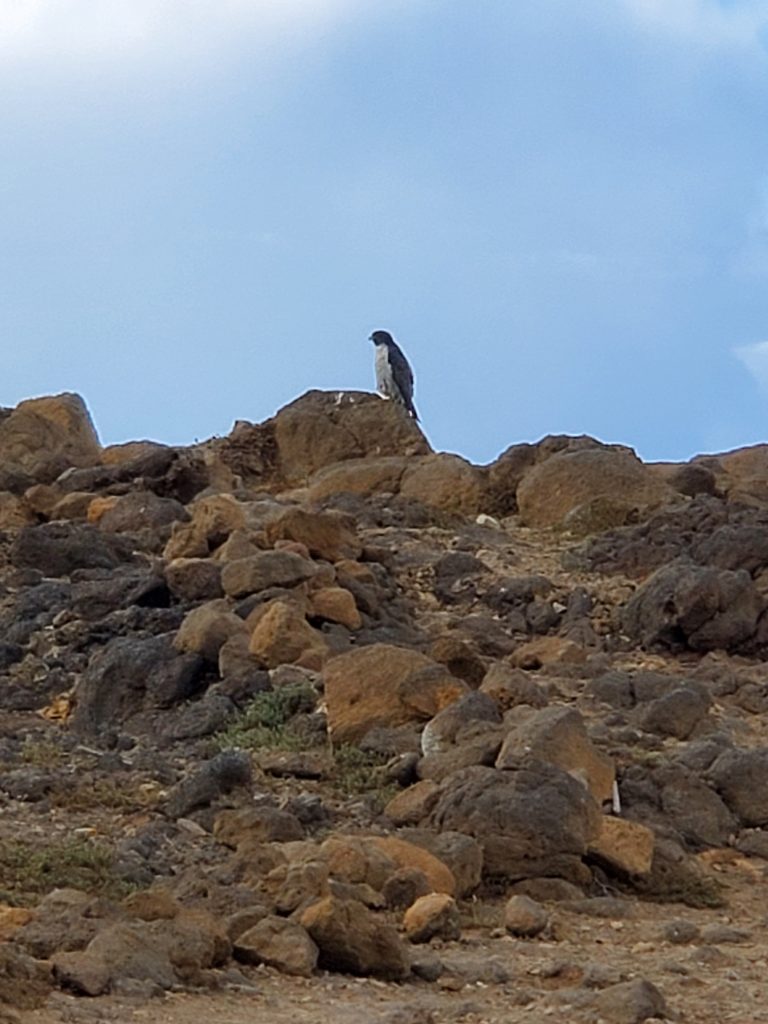 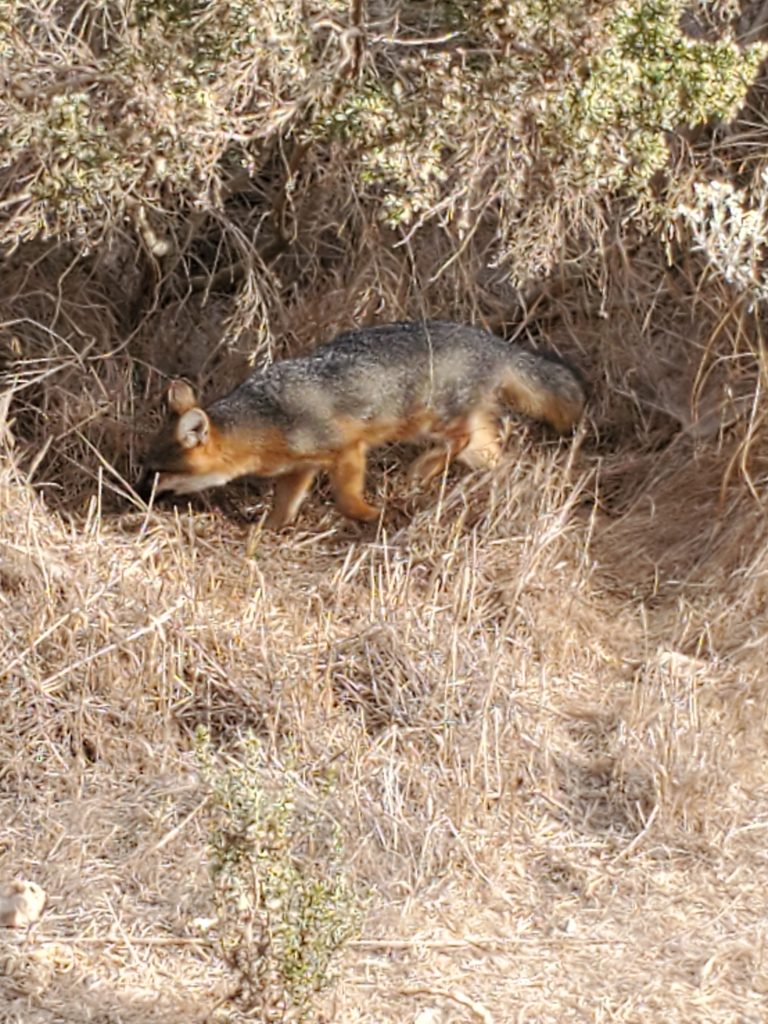 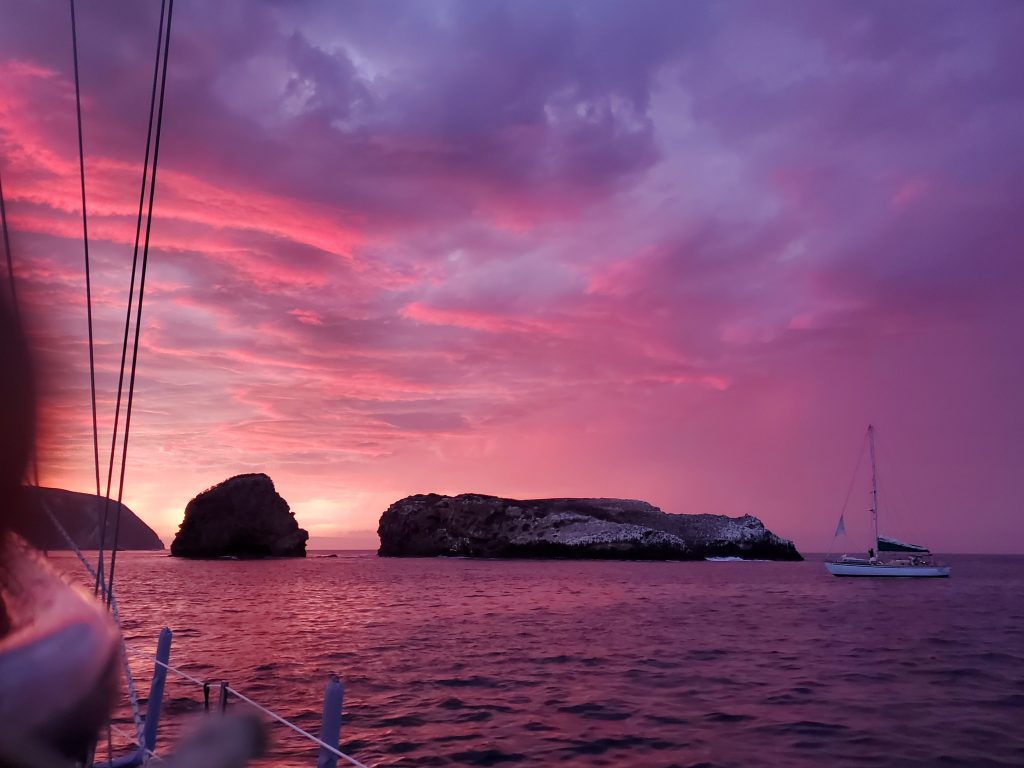 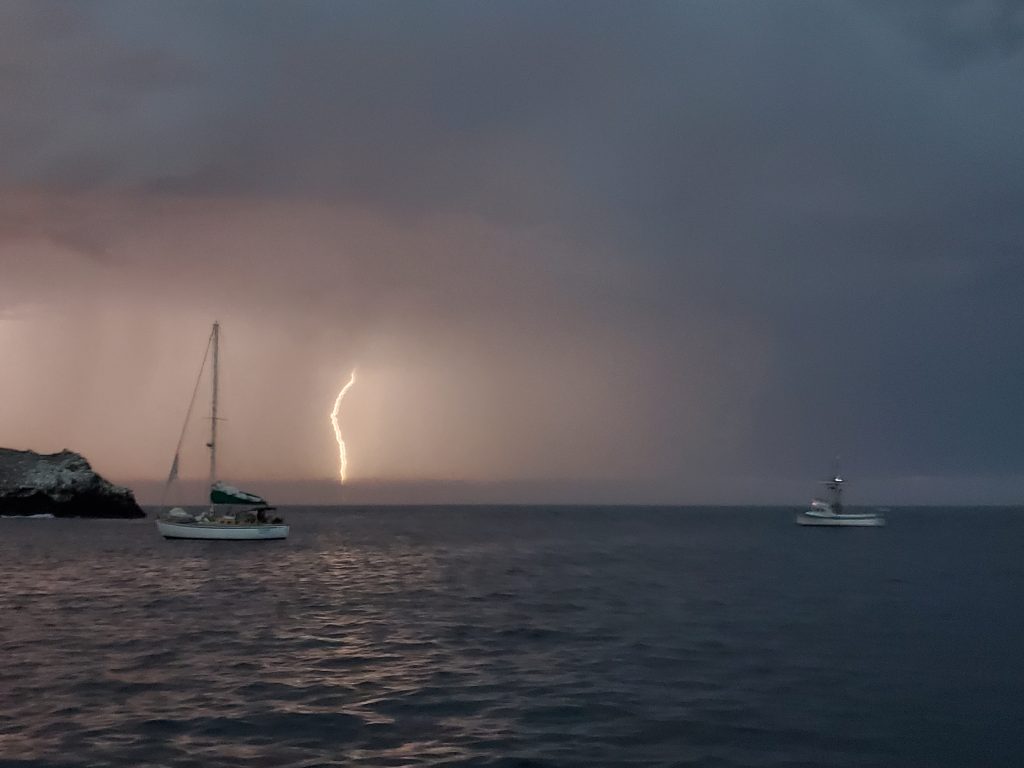