On January 8th we started our final leg north in the Sea of Cortez to the Midriff Islands. After that point we will be sailing south for 7 or 8 months. We had a good weather window to go north for the past two days but really wanted to stay and see our Anacortes friends off. Also, there is a good chance we won’t see Rochambeau or Fundango again as we each go our own way. (Hearing Fleetwood Mac in our minds…..“You can go your own way! You can go your own wa-a-ay”) So we enjoyed as much time as possible together but then our weather was closing in on us. According to Predict Wind, our weather app, we had three days until the next north wind blew. Gotta get a move on! We were ready to set sail by 5:00pm but we needed to wait until 6:00pm or risk arriving in Rosalia before sun-up. Coddiwhomple stopped by with 4 Terabytes of movies downloaded on our new hard drives brought from Anacortes and Rochambeau came over to wish us fair winds and following seas as they helped cast off our lines. We left Puerto Escondido as the sun was setting without a breath of breeze, so beautiful! 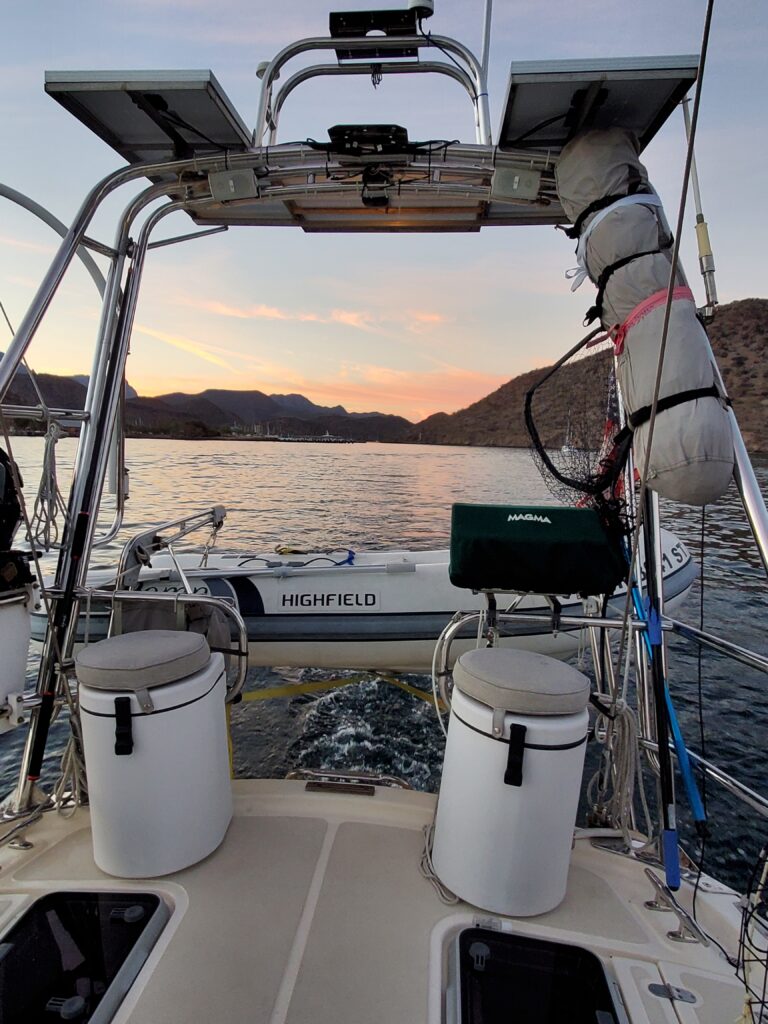 After sundown we saw shooting stars and phosphorescence in our wake, magical! In the dark we were passing points we had already visited: Isla Coronados, Punta Pulpito, San Juanico. We were still in familiar territory. During the night, the wind started picking up and we were at a steady 12 to 16 knots and with fog at 1am. That was not the forecast! We rounded Punta Concepcion at 5am and we were now further north in the Sea of Cortez than we had been so far. The weather continued to build from the north along with the waves making for slow, rough going. We finally made it into Santa Rosalia harbor at 12:30, happy to be anchored in the protection of the breakwalls. Apparently the 3 day window before the north winds was cut down to 12 hours! 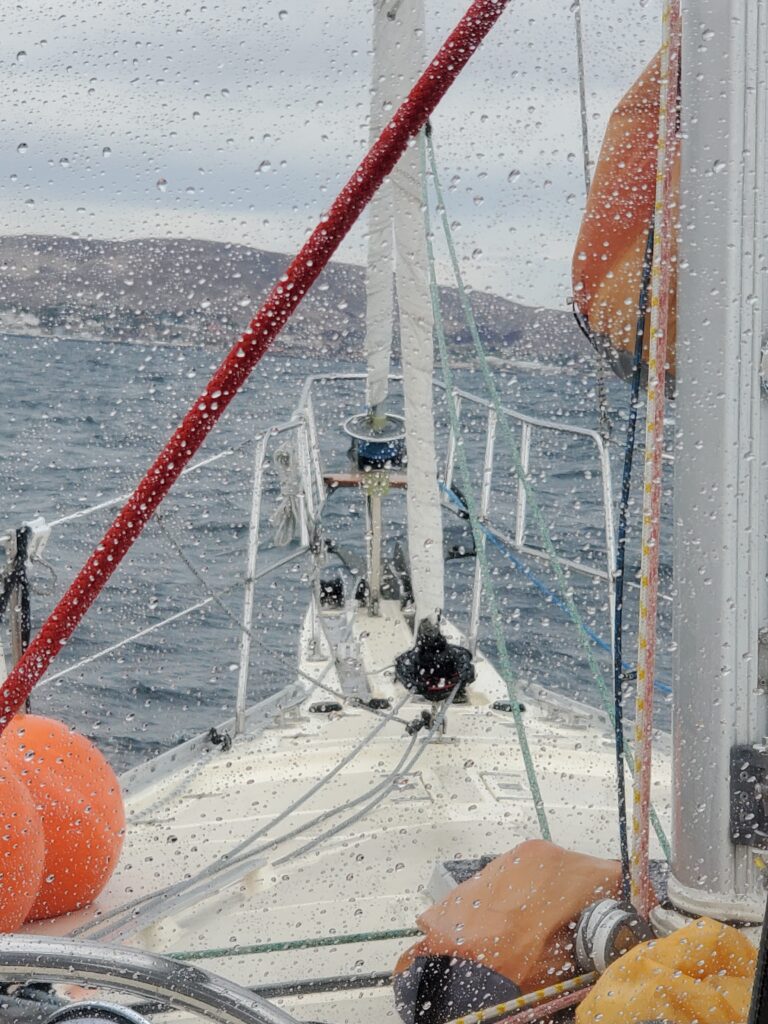 On a positive note, we would have plenty of time to explore Santa Rosalia, an old mining town, while waiting for our next weather window. The town reminded us both of Butte, Montana. Once a rich and booming town now small but still proud of its history. There was evidence of its rich mining history throughout with the defunct smelter alongside the harbor, a smokestack on the hill in the distance, mine shafts carved into the cliffs along the main street, and smaller than normal train tracks crossing town for the mining cars. We walked the whole town from seaside to the top of the hill and back. It must have been impressive in its heyday! There were little city parks about every 5 blocks or so still with Christmas decorations. Popped balloons and confetti were proof of recent holiday celebrations. There were some very fine-looking homes, now historic, that sat on the hillsides overlooking the harbor. There was even a steel church designed by Eiffel, the designer of the Eiffel Tower, shipped from Europe and assembled in downtown. We visited the mining museum complete with historic photographs, mining equipment, and accountant’s books. Finally the weather was forecast to become reasonable so we prepared to make our next jump north to Bahia San Francisquito- a 79 mile trip. 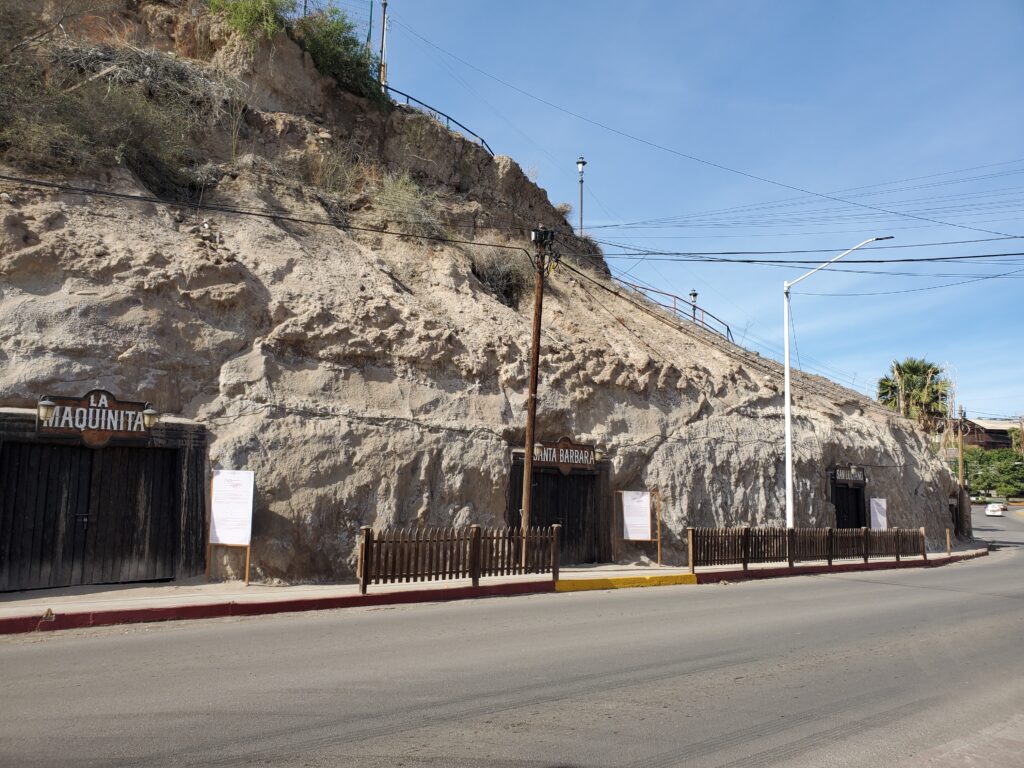 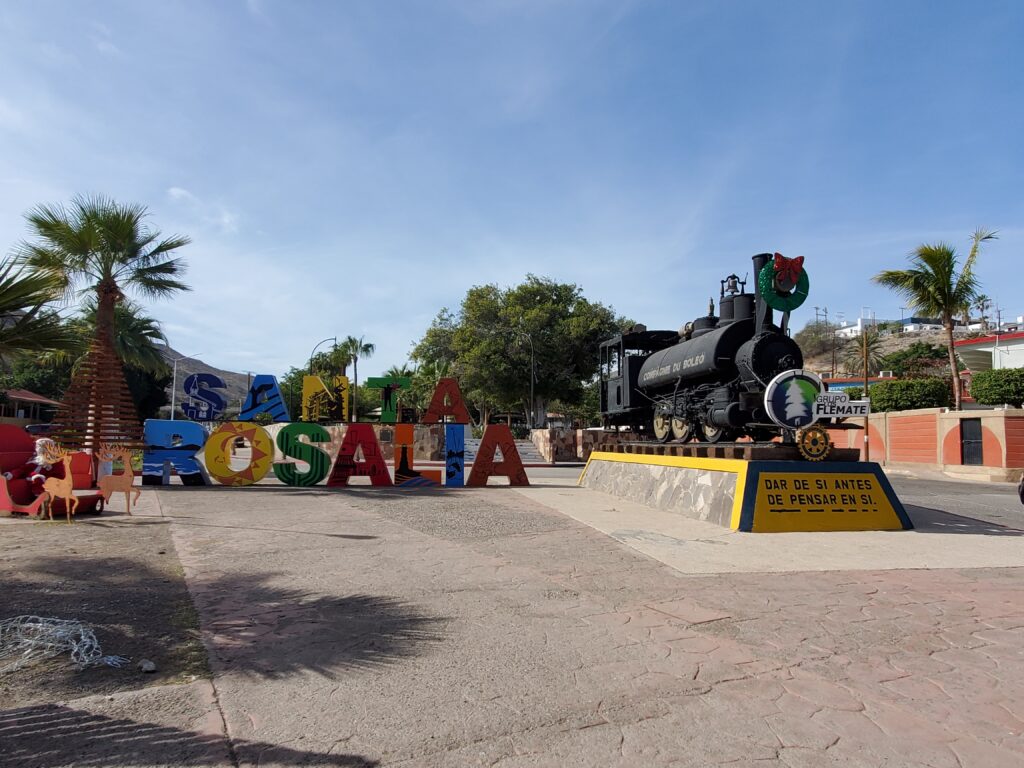 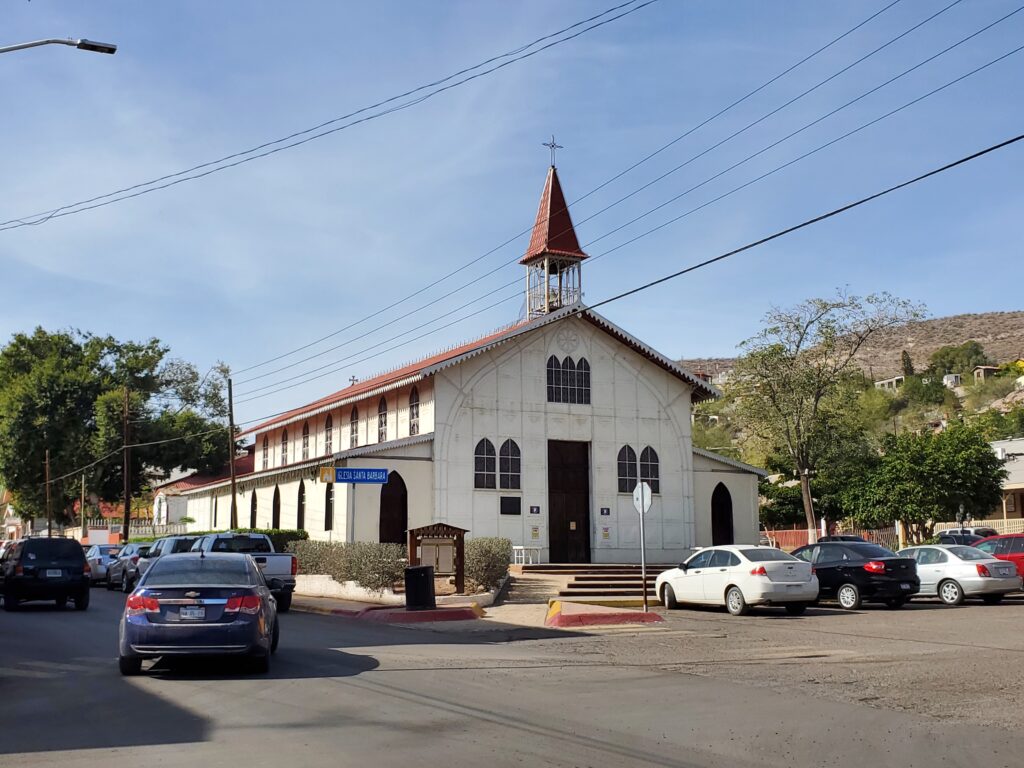 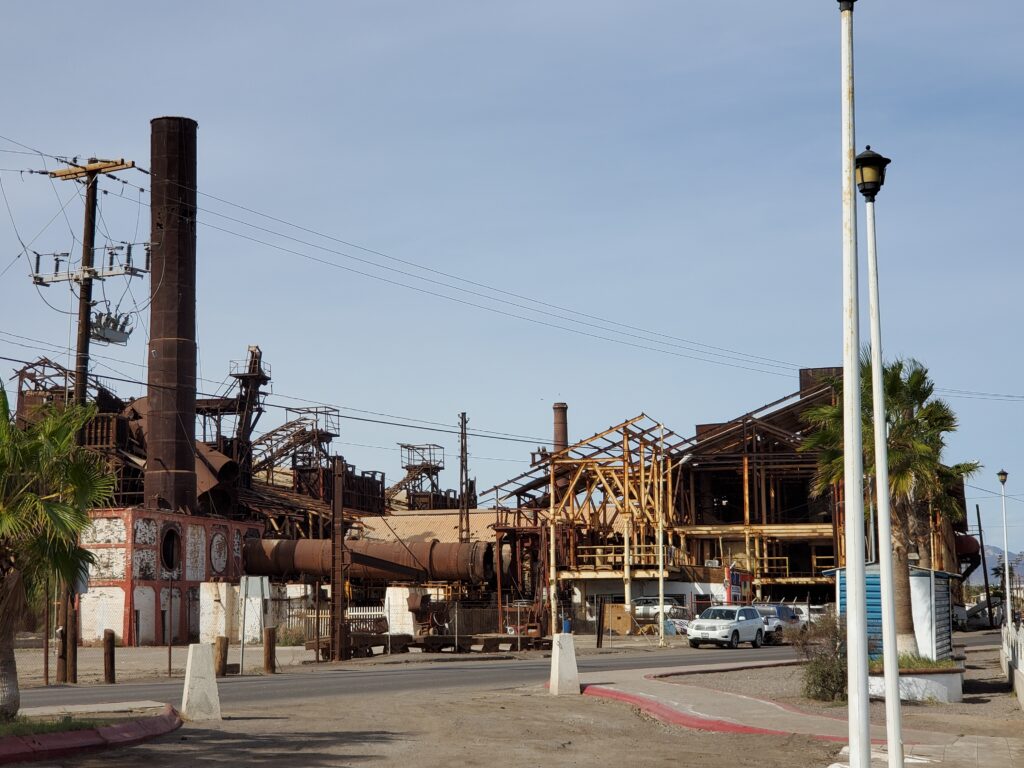 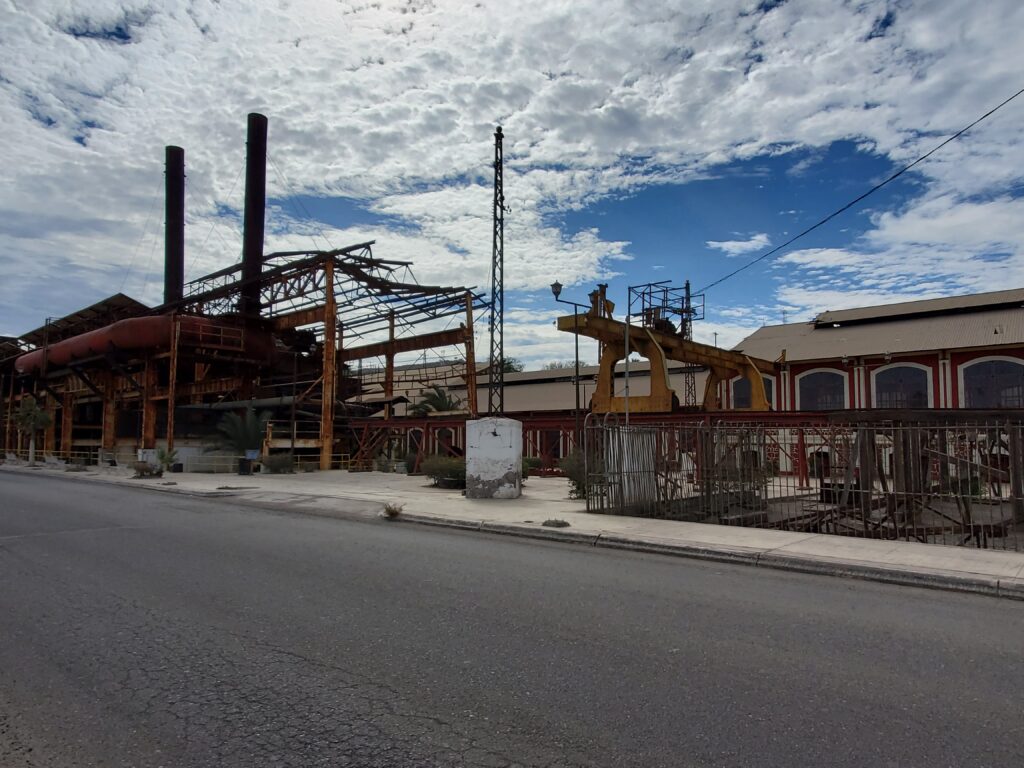 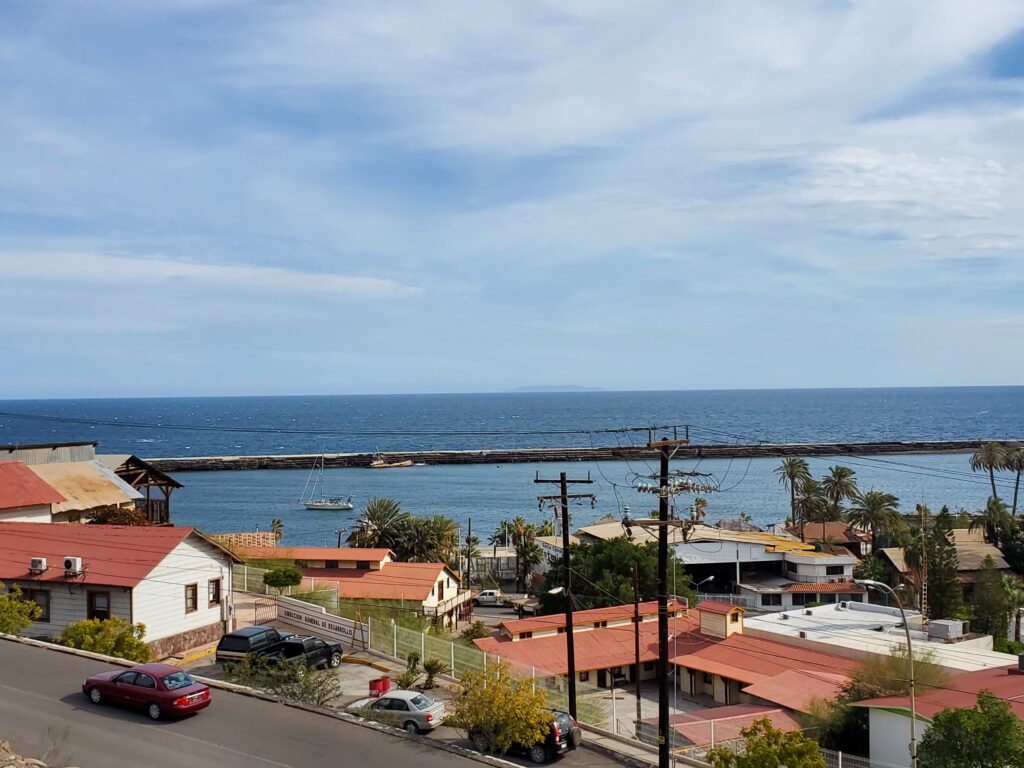 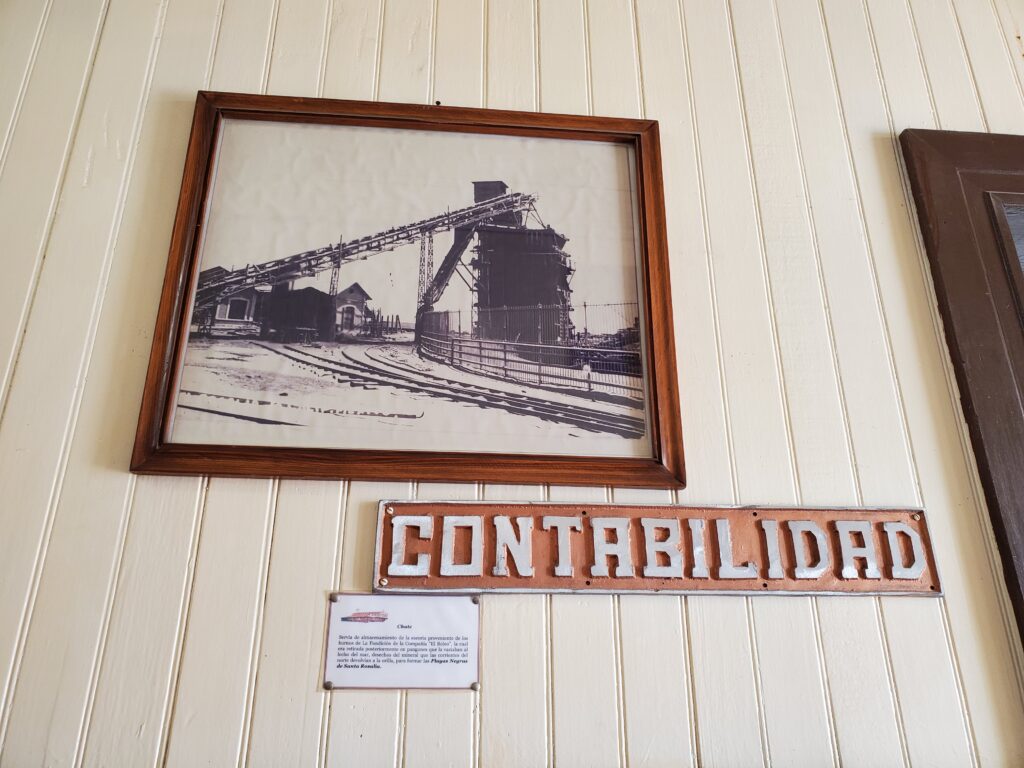 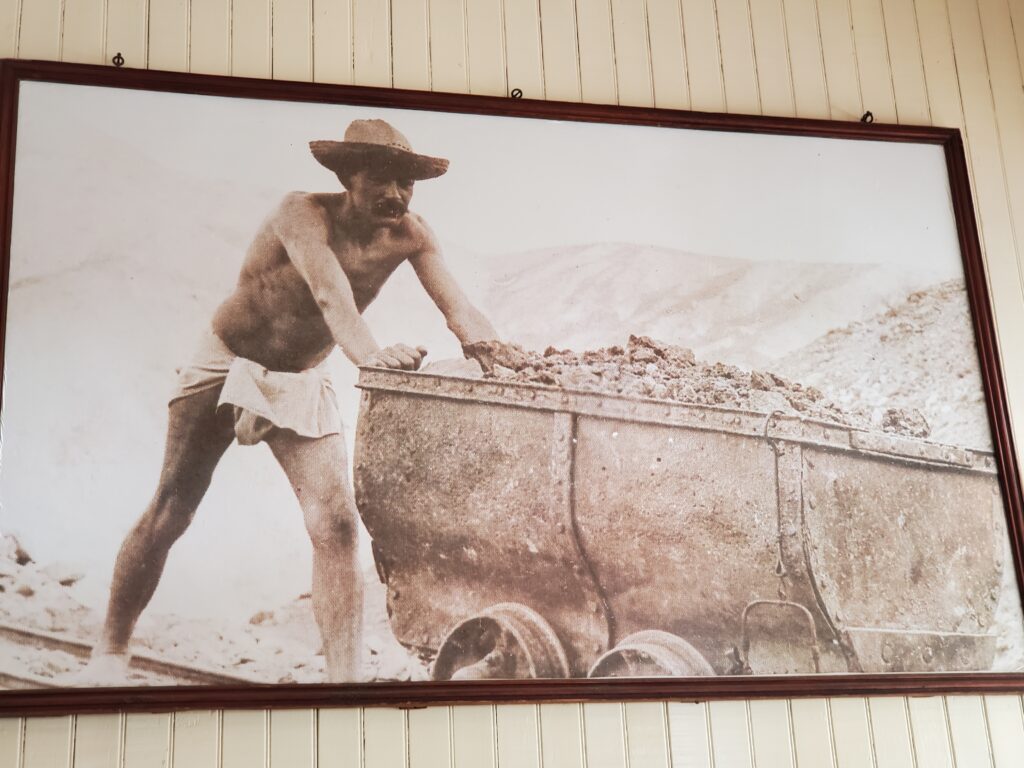 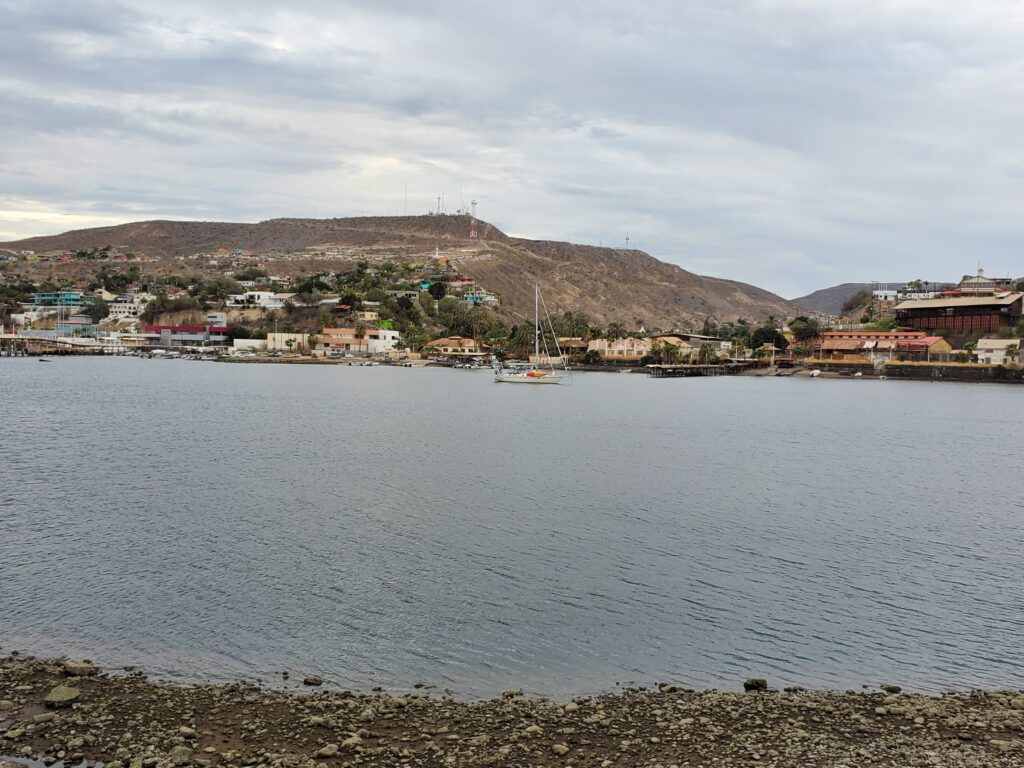 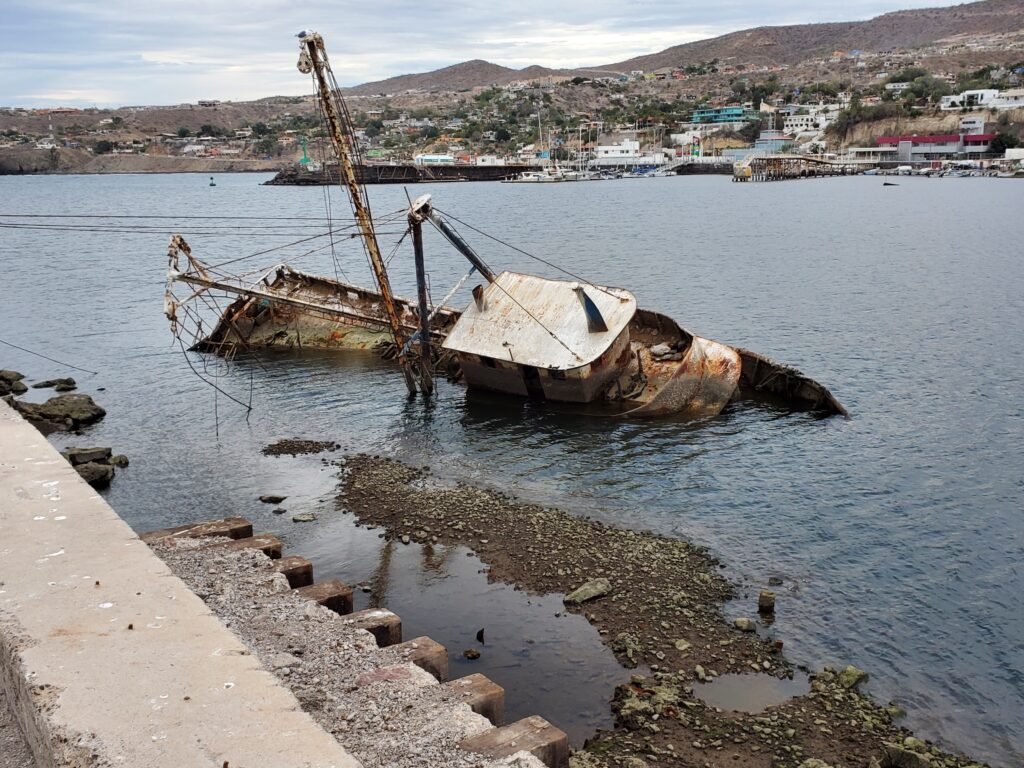 The guide book warned of cables and old mining equipment sunk in the little Rosalia harbor. We had tied a line to the hoop on the top of our anchor to help pull it up in case we hooked any debris. With fingers crossed we started the process of lifting the anchor at 3:30am in the pitch dark. We were lucky, it was no problem. We left the protection of the break wall and immediately encountered the big swell that had built over the last 5 days. We pitched and rolled right and left until we could make the turn and point Sacagawea straight up the waves. We were treated to a lovely sunrise and as the hours passed, the seas flattened with no wind to kick them up. We saw the biggest whale we have ever seen pass close by us. It took what seemed like a full minute for the whole animal to surface and dive again. We think it was a sperm whale! We made it into beautiful Bahia San Francisquito at 6:00 pm to the sound of a loon calling and a coyote trotting along the empty white-sand beach. The bay looked quite interesting but we planned to leave at sunup to get into the protection of El Alacron in Bahia de los Animas, 34 miles north, before the next north wind event which was forecast to start in the afternoon somewhere around 3pm. 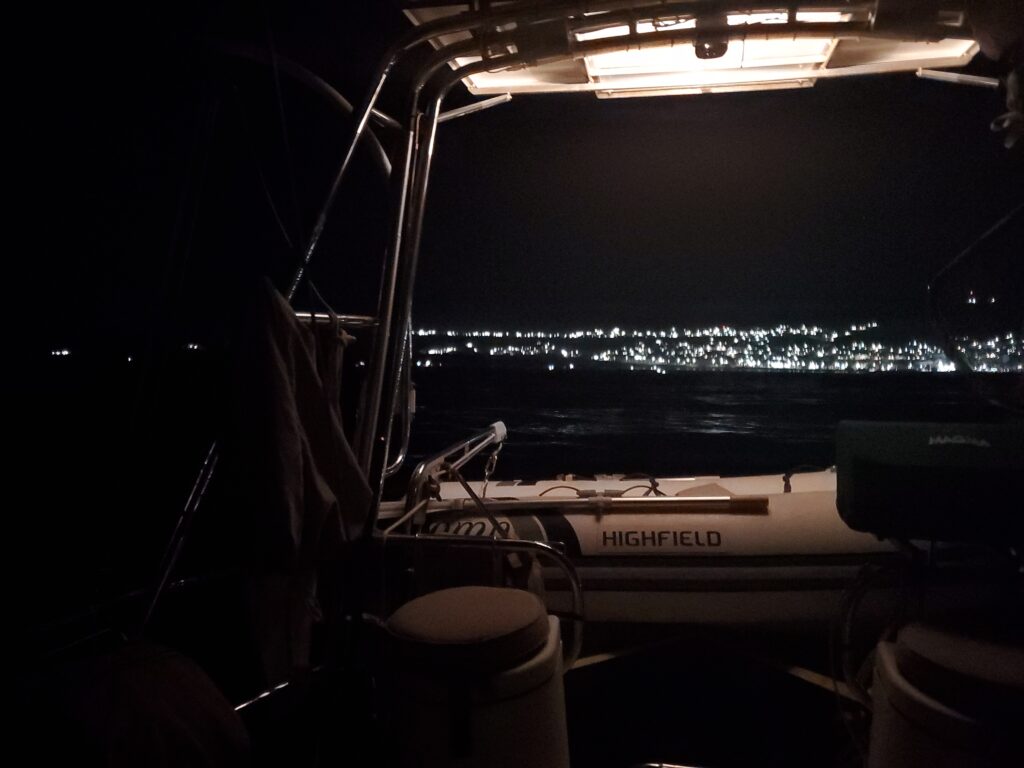 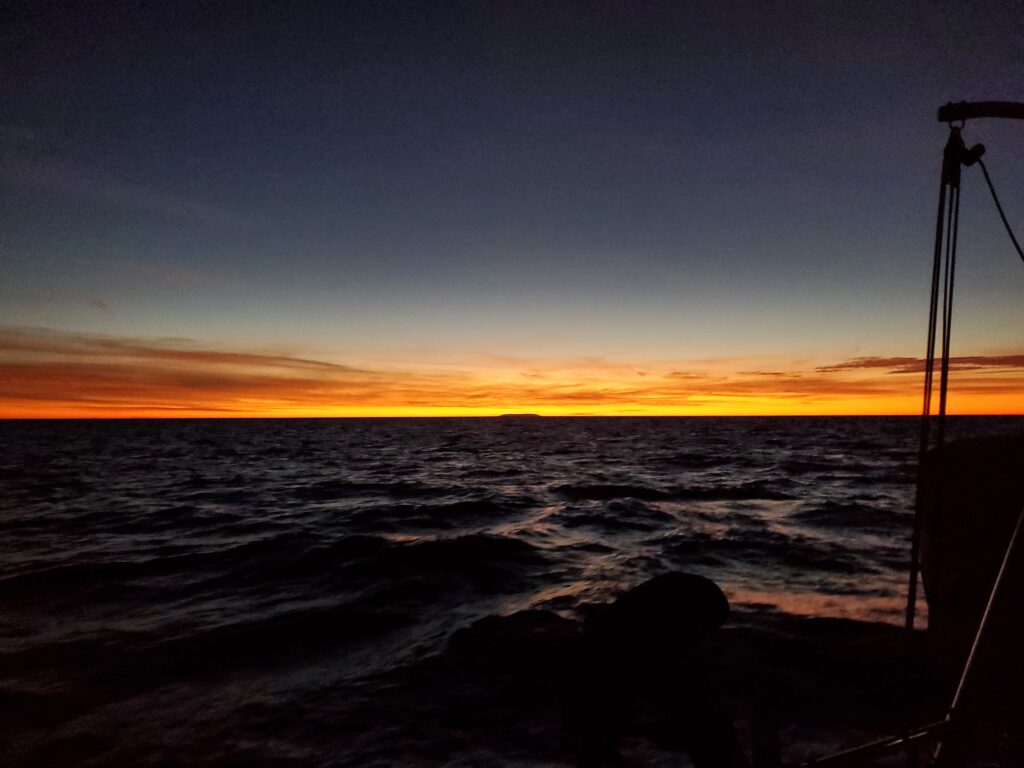 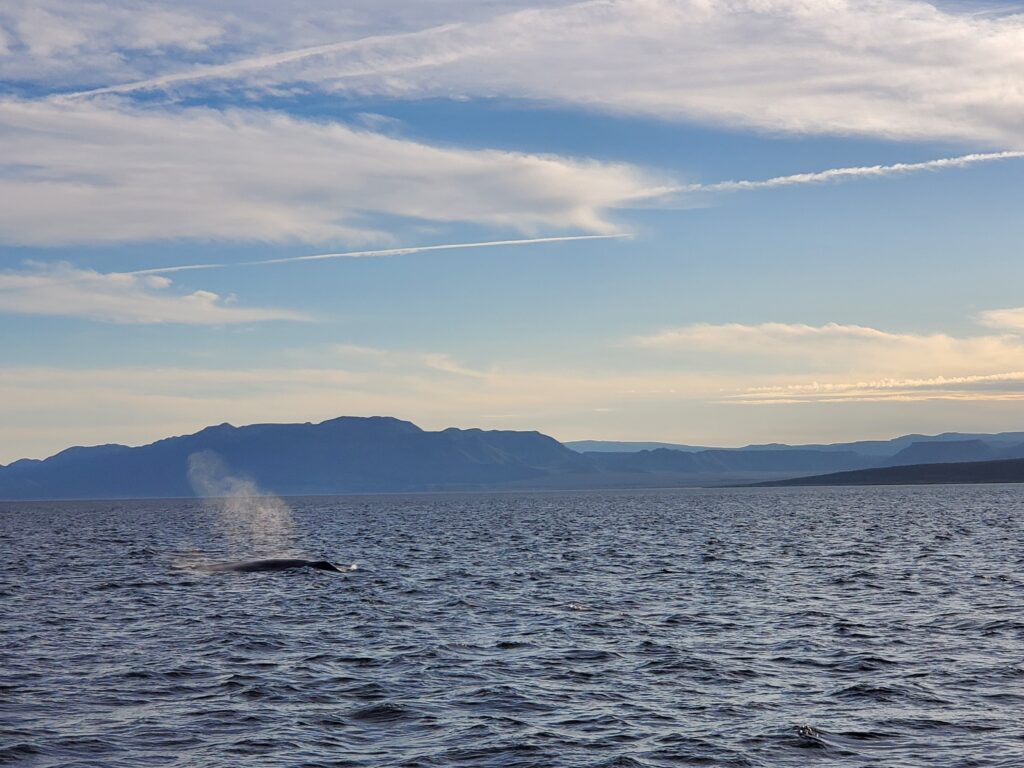 We woke before dawn and set off as the sky turned red with an awesome sunrise. “Red sky in the morning sailors warning” Hmmmmmm. Thirty-four miles, we should be there by noon, well before the forecast blow and the anchorage we chose had great north wind protection. Ocean swell began building immediately however and by 8:30 there were steep waves 4 feet high every 2 to 3 seconds with a random 7 footer thrown in for fun. We saw our first pod of humpback whales at 9:00, three hours into our trip. Woohooo! The weather continued to deteriorate though, with a steady 27 knots and up to 35 knot gusts. The waves began breaking over our bow, making the anchor lift off its perch on smash back down, and pushing water all of the way into the cockpit. That was a first, yikes! We were only four miles from our destination when we decided it was unsafe to continue. We had been sailing for 6 hours but we were barely making any headway so it would be hours more to go at this pace. We turned around on top of the next wave and high tailed it back to San Francisquito. I was at the helm and could hear the freight trains roaring up behind me but I refused to look and feel intimidated. Sacagawea could handle it! Three hours after our turn around we were anchored and exhausted. We were both disappointed and felt the need to make the best of it. We dropped the dinghy and explored the shore that we didn’t have time for the previous day. Two coyotes trotted down the beach as we prepared to head in. We found several turtle nests with evidence of hatched eggs. It was nice to see that there were still turtles hatching in the wild without our protection. There were some interesting sandstone formations and a freshwater pond with all kinds of animal tracks around it. We headed back to the boat as the sun set and the full moon rose. It was a chilly 59 degrees and the water was too cold to swim in at 61 degrees. It felt like it was definitely time to head south despite our desire to see Bahia Las Animas and Bahia Los Angeles. We can’t see everything! 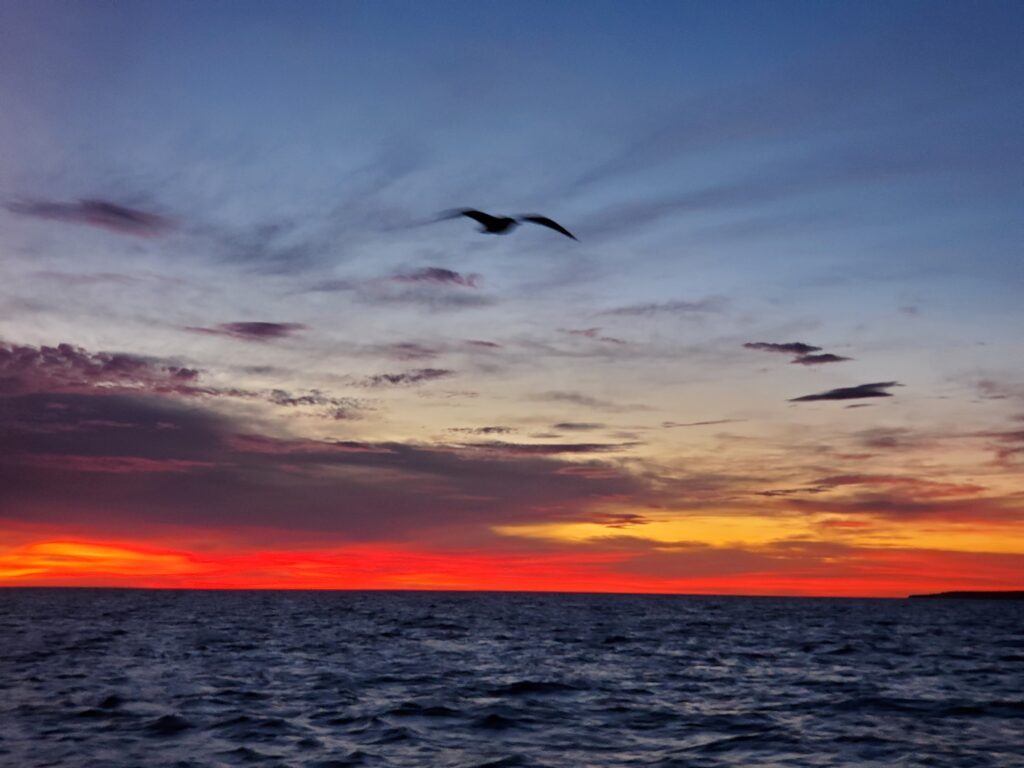 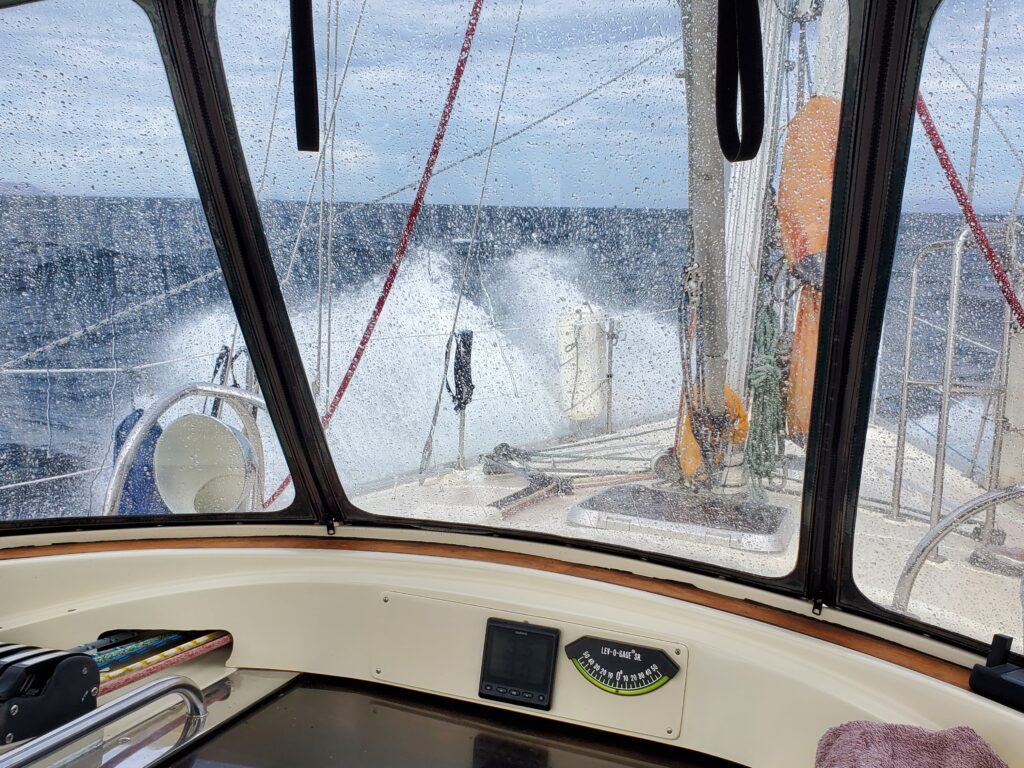 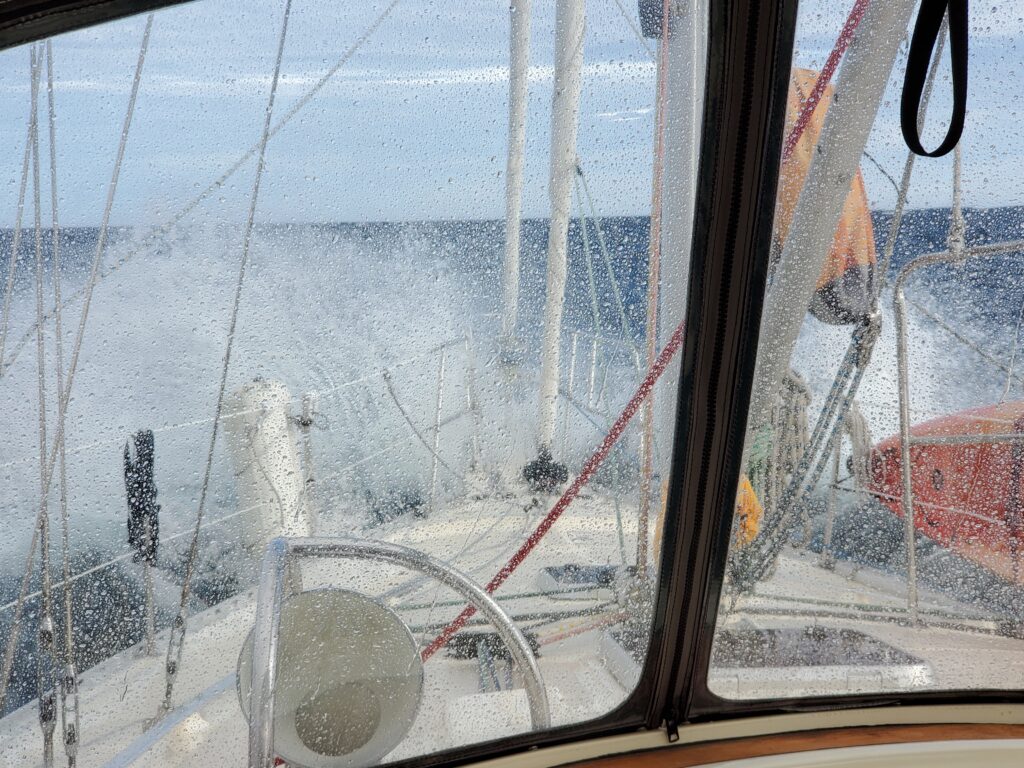 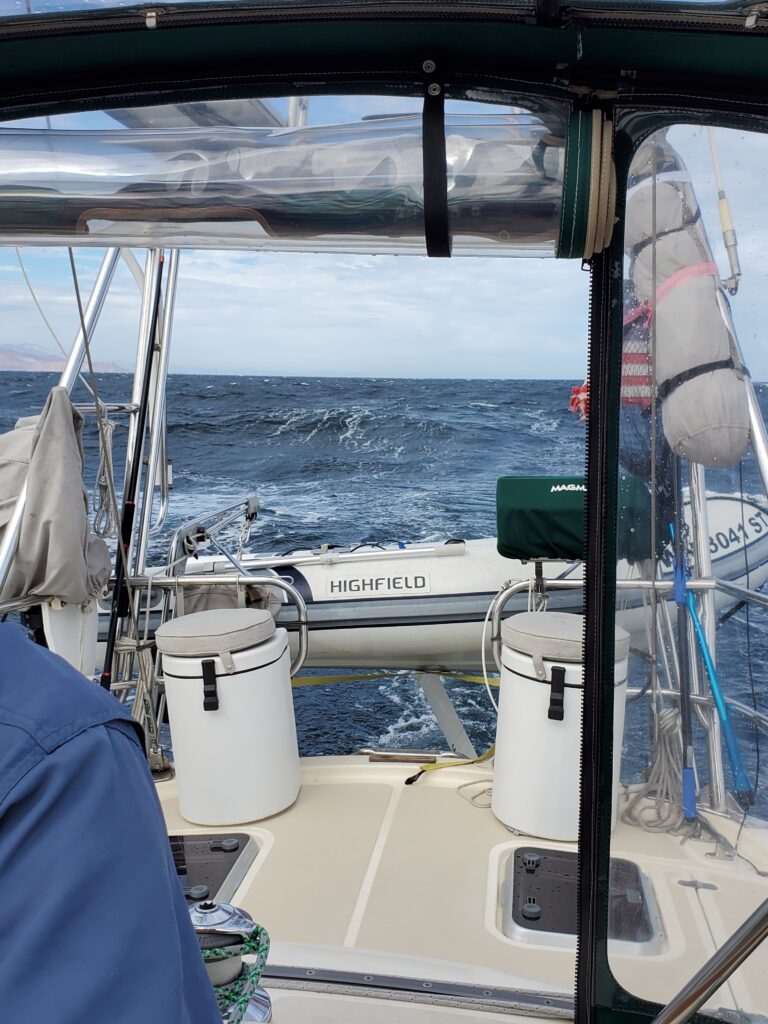 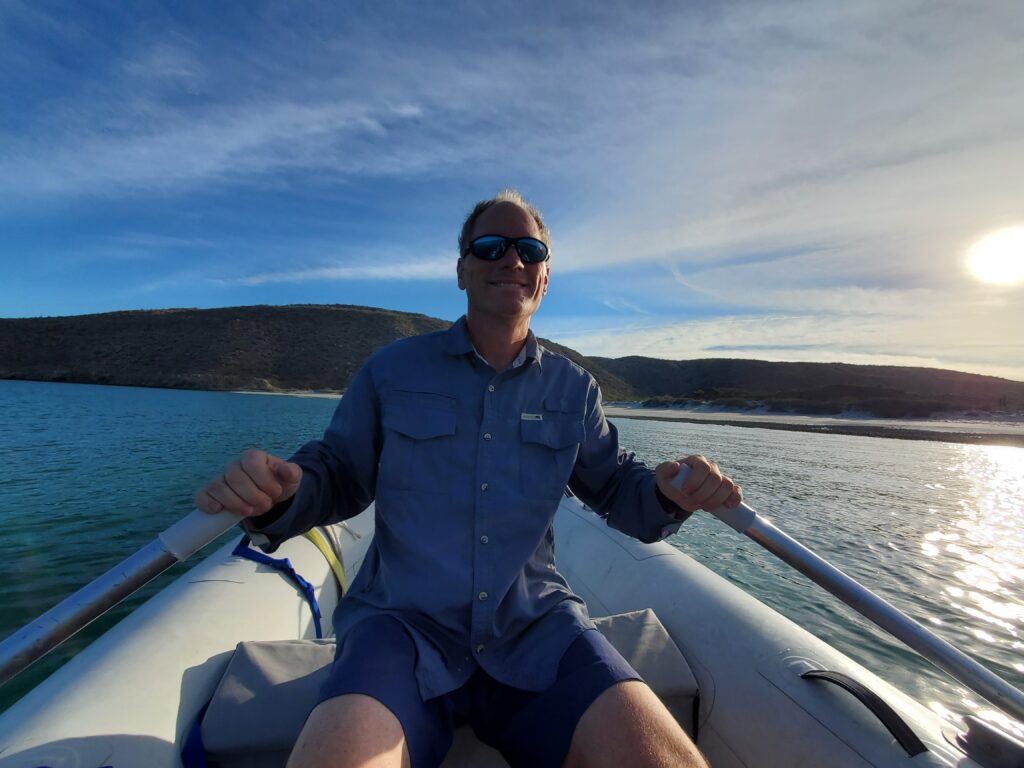 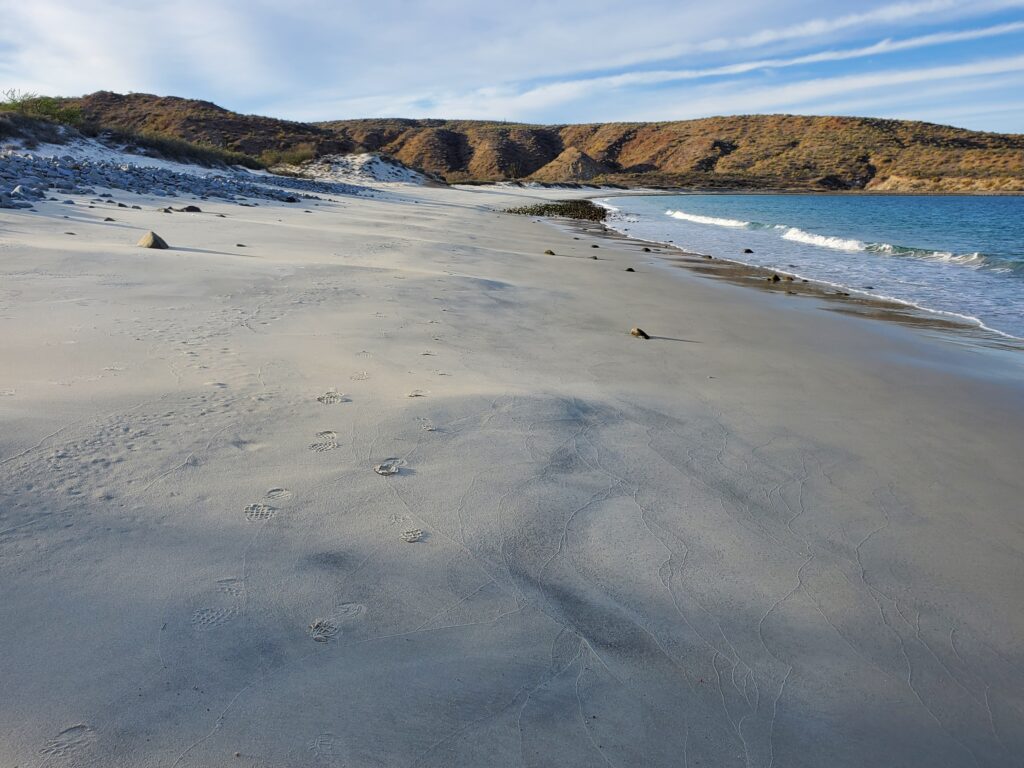 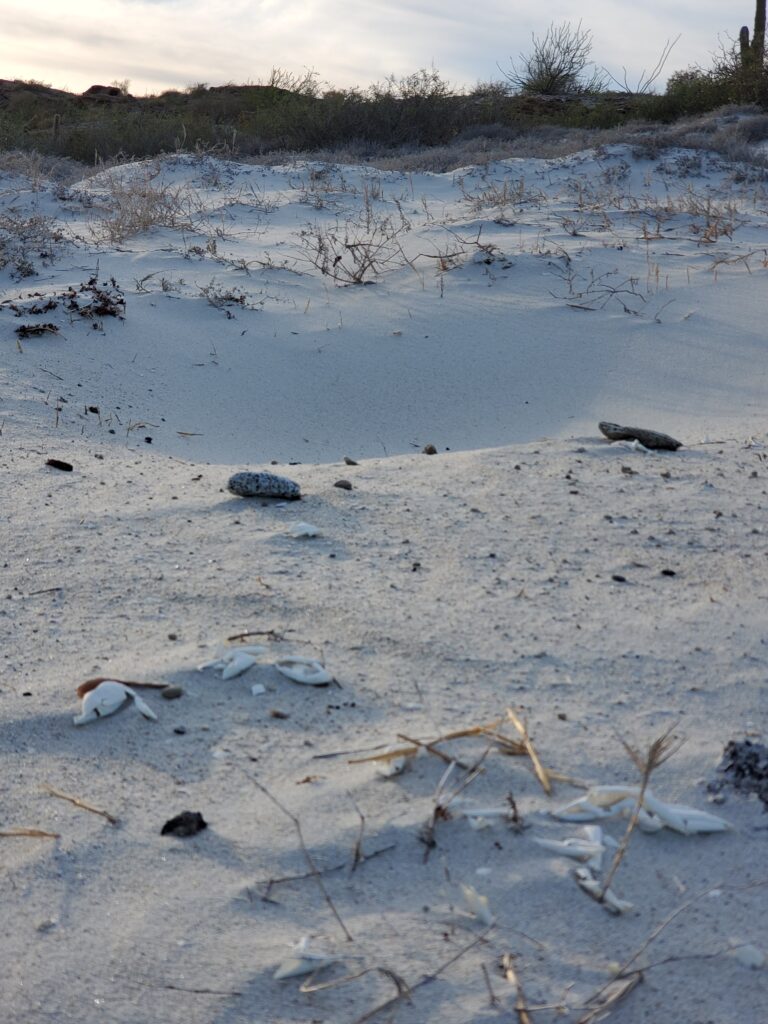 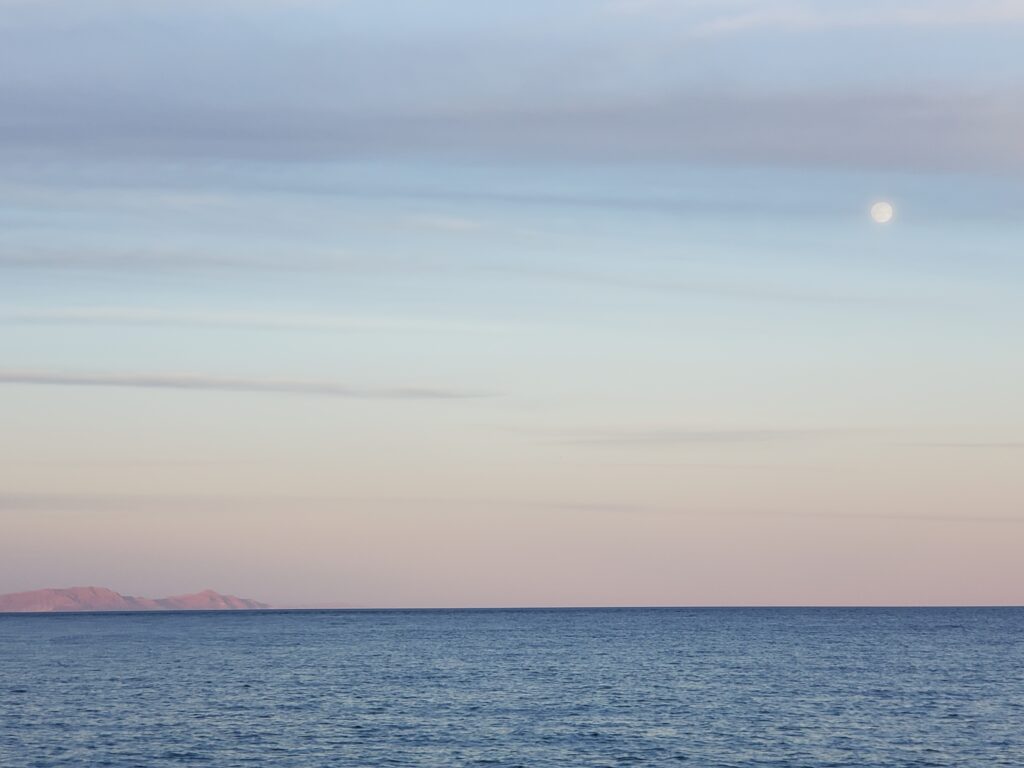