Let’s just jump into the deep end! No time to warm up or practice. Let’s get in and go off shore. The boat was put in the water Thursday, Woohoo! Oh, it did not go smoothly, as you would expect by our history. We went into the water at 08:02am, had a leak in the brand new shaft seal, and we got pulled out of the water at 09:46. “We will have it fixed in a couple of hours” Did we believe it???? Absolutely not! But, we hung around. Finding shade where we could in the boat yard, eating lunch while sitting on a downed telephone pole, watching and hoping. There is Mike! He was heading toward our boat with a tool chest. In he went, we followed excitedly. He changed out the lip seal (not easily). They had put two extra seals on the shaft that could be pushed forward into place over time as needed. They did this knowing how difficult pulling the shaft was, thinking ahead, wow! Well, we were down to one extra now but at least we knew how to change it. Back in the water again at 12:46! No leak! We are out of here!!! 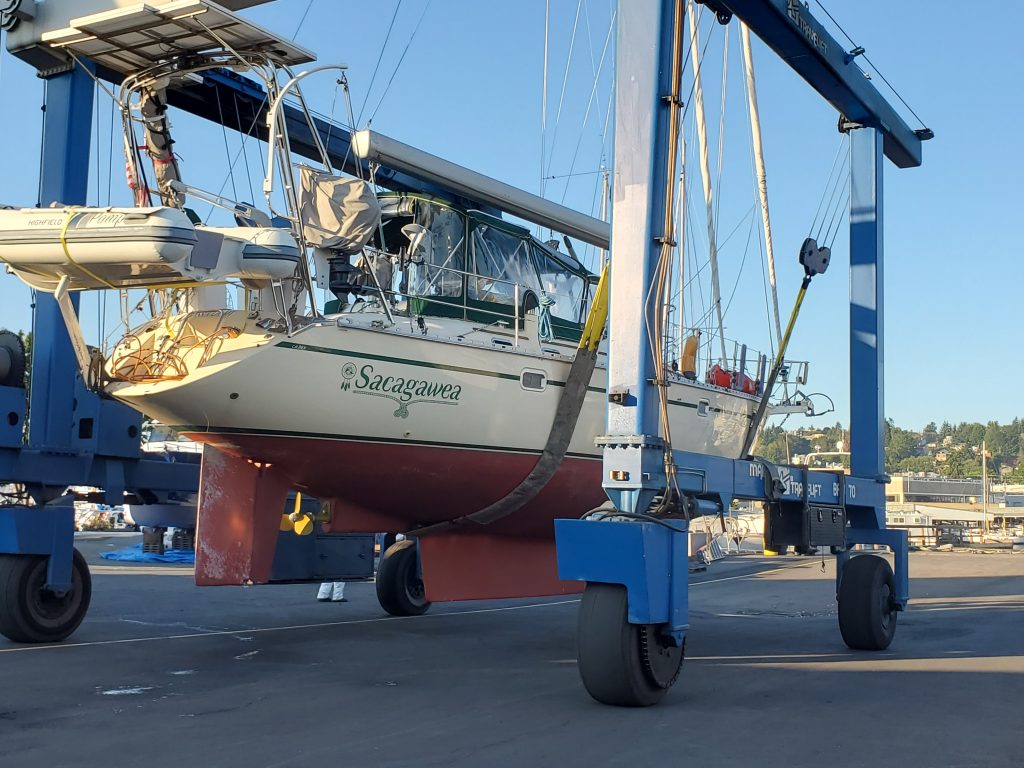 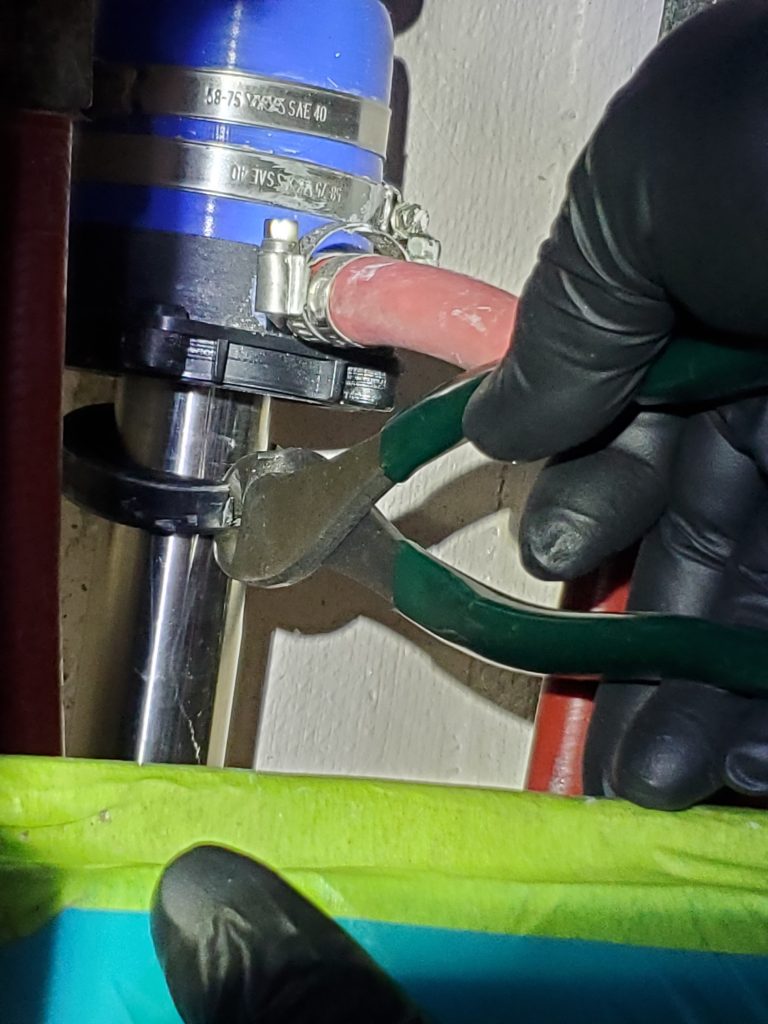 Ed, one of two of our crew for the 850 mile sail to San Francisco, came over to help us through the locks down to Shilshole. We made it in to our slip about 4:00. We had sooooo much to do! We both dove in knowing everything that needed to be done. No discussion, no questions, just doing. We had been anticipating this day for so long. It felt surreal. Like a dream. Is it really happening? Oh, as we were in the midst of frantic preparations we were contacted by our new friends from Alaska on S/V Rochambeau that their friends on S/V Chaos who were also going to do the Baja Haha rally down to Mexico were at Shilshole as well. Turns out they were right across the fairway (the space between docks)! We managed to meet them briefly after dinner and discuss a simultaneous departure for the trip down the coast to San Francisco. 10:00pm we have got to get some sleep! Tomorrow we needed to do a few things in the day light, the crew needed to move aboard, and we planned to literally cut the dock lines at noon. No more Pacific North West!
Jaqi and Ed were on time at 10 am and jumped right in to helping prep to go. Thank you Doug! He showed up with an old line that we cut with hoots and hollers reminiscent of the previous weekend in Port Townsend with the other boats. Off we went to Port Townsend. We had Orca and dolphin celebrating alongside as we finally began of our travels! We anchored out rather than getting a slip and started to get to know each other better. We made plans to up-anchor at 6am and head to Neah Bay. Our last anchorage until San Francisco! 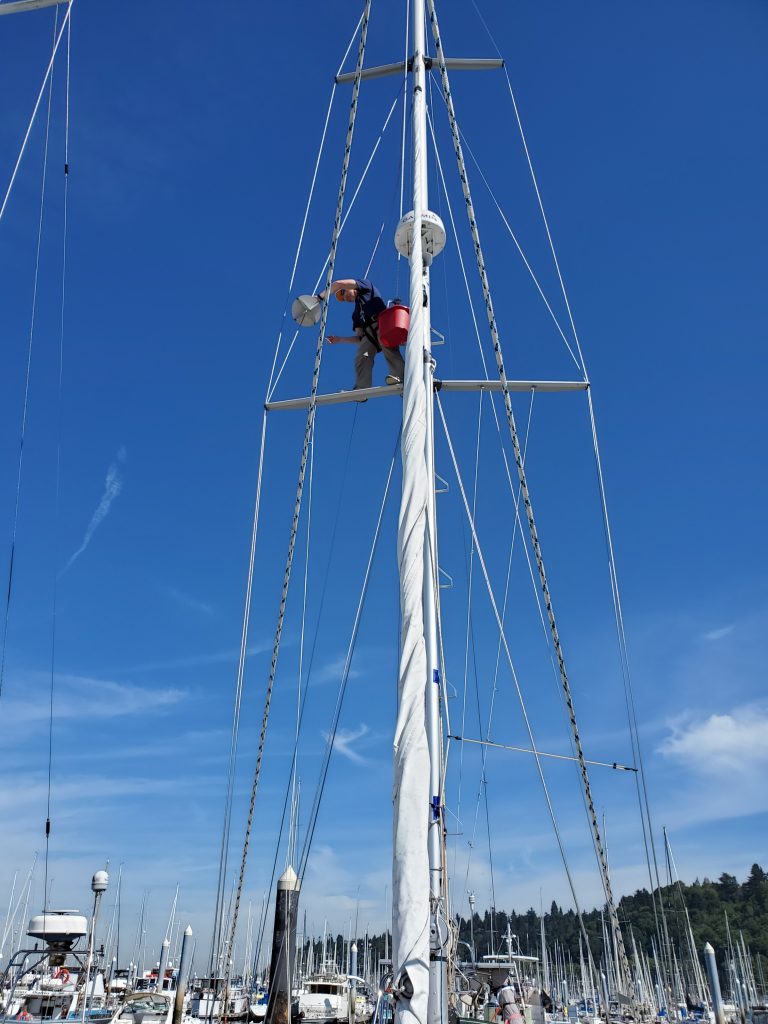 Due to our very delayed embarkation we were off-timing for the tides and the moon, so we just gritted our teeth and motored into the current of the incoming tide. We stopped into Port Angeles briefly to top off our diesel tanks, the last fuel til San Francisco. Another casualty of our delayed departure was our originally planned stop in Crescent City to see the Redwoods and Crater Lake. We felt it was too risky to stop because we might be caught by weather at the Capes and have to lose more precious days waiting for it to clear. Some of the other Coho Hoho boats had been stuck waiting for weather at the Capes for over a week. The Strait of Juan de Fuca was kind to us and it was a straightforward motor with only a handful of commercial ships, and as a bonus, Mama Nature gave us a long-distance show of some whales breaching! 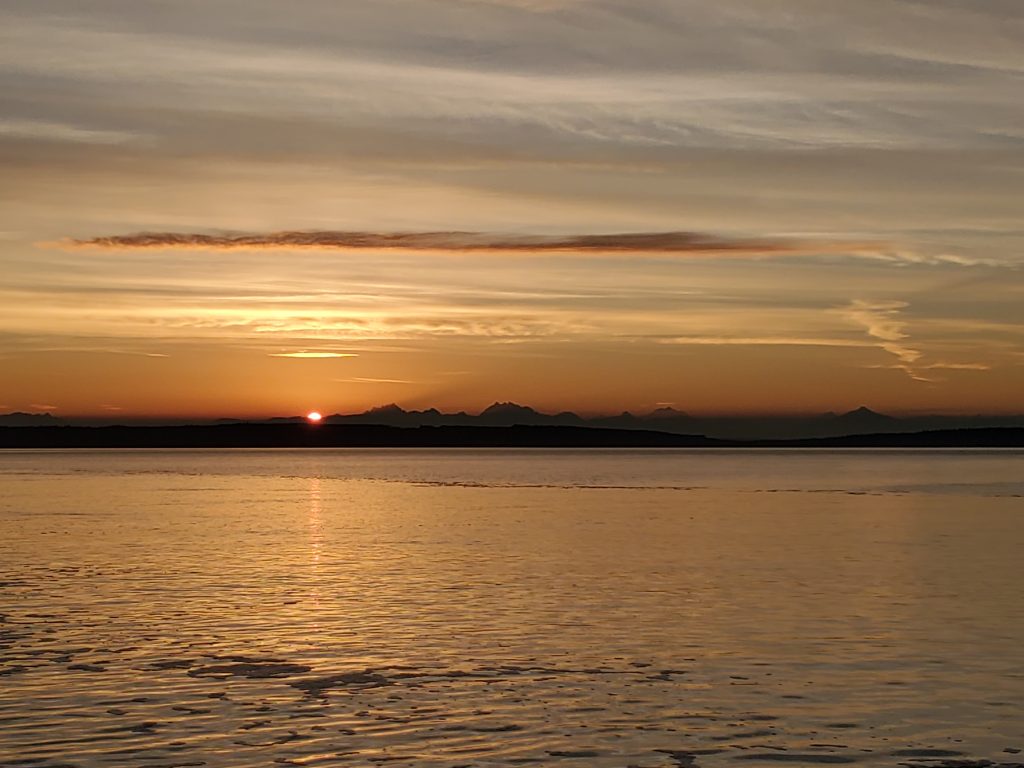 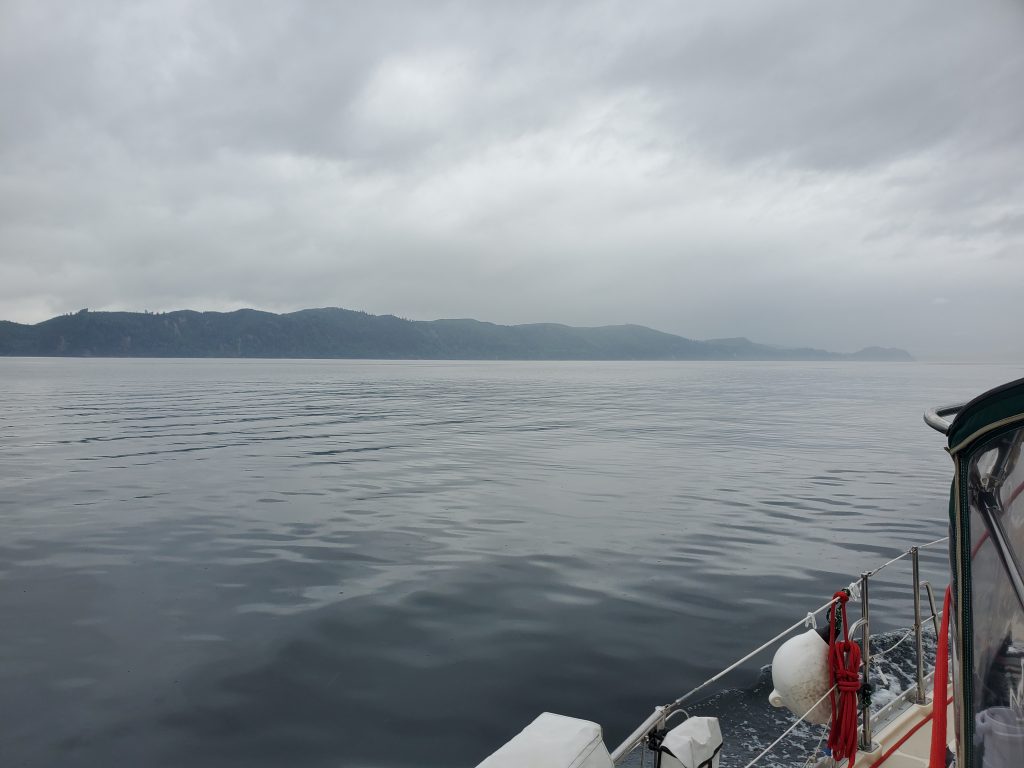 We entered Neah Bay in cold rain and low clouds, hooking the anchor at dusk. Dana from Missoula, MT on s/v Further, a 35 foot sailboat, came paddling over on a pool float in the pouring rain (her dinghy was already lashed for the trip offshore), bringing self-projected sunshine with her. She said she had found one of the Coho Hoho rally booklets with small descriptions of all of us. She took note of us in particular because of our hailing port of Missoula. How funny that we should literally anchor in front of her before we both take off on a great adventure! We shared our stories of sailing on Flathead Lake and how we wound up here at this moment. Her irrepressible enthusiasm was antithesis to the wet, dreary atmosphere and we were all lit up and laughing by the time she paddled off in her bright yellow blow-up “canoe” to her boat and crew. 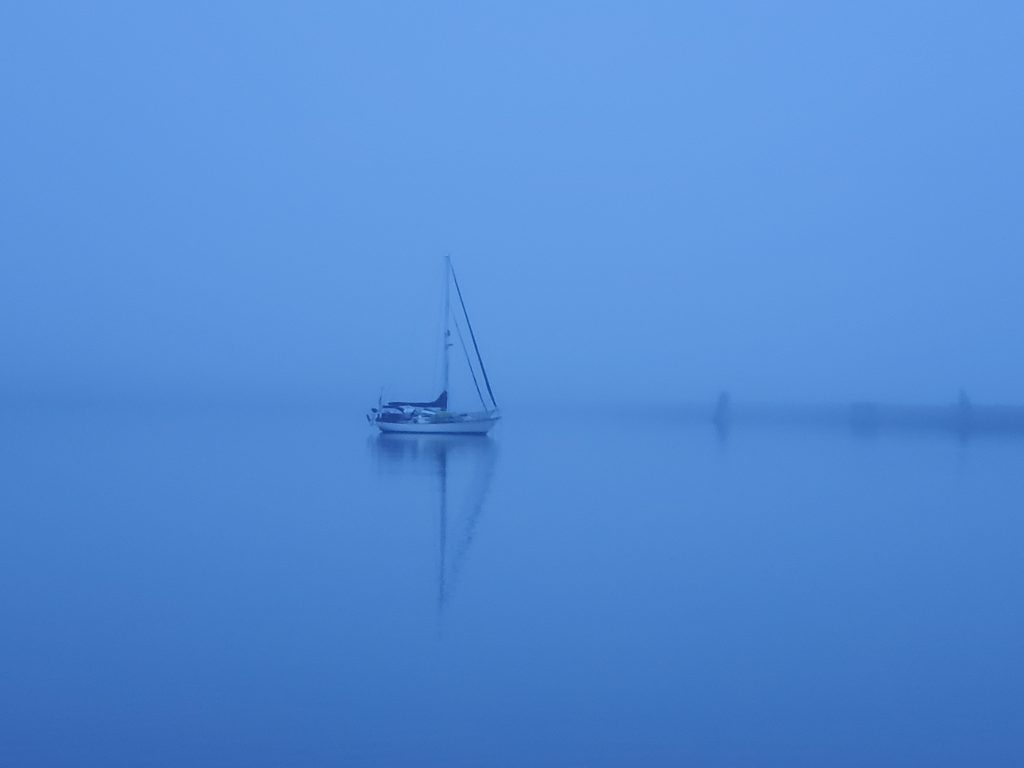 Off we went at 6:30 in the fog, semidarkness, and zero wind. We turned the big corner at Cape Flattery (never saw it through the fog!) and headed south in waves from one direction and swells from another, no wind, no horizon, a recipe for sea sickness. The remedy is supposed to be “get out in the breeze, look at the horizon line,” but it was impossible to see any horizon in the fog. Almost as a portention, we saw a HUGE shark fin not long after breaking out of the fog. Then the motor quit. SHIT! We pulled out the Jib (head sail) but there was no wind. It hung slack, waving back and forth in the washing machine action of the waves and swell. Ugh! I was at the helm, Bill was down below becoming green working on the engine. He switched fuel tanks, primed the line, and we got the “iron jenny” started. Thank goodness! Bill fed the fish shortly after he got the motor started and I did also about an hour later. We put on Scopolamine patches. That was It. Good from there on for the rest of the trip, even after the patches were finished and we got into some very boisterous conditions… 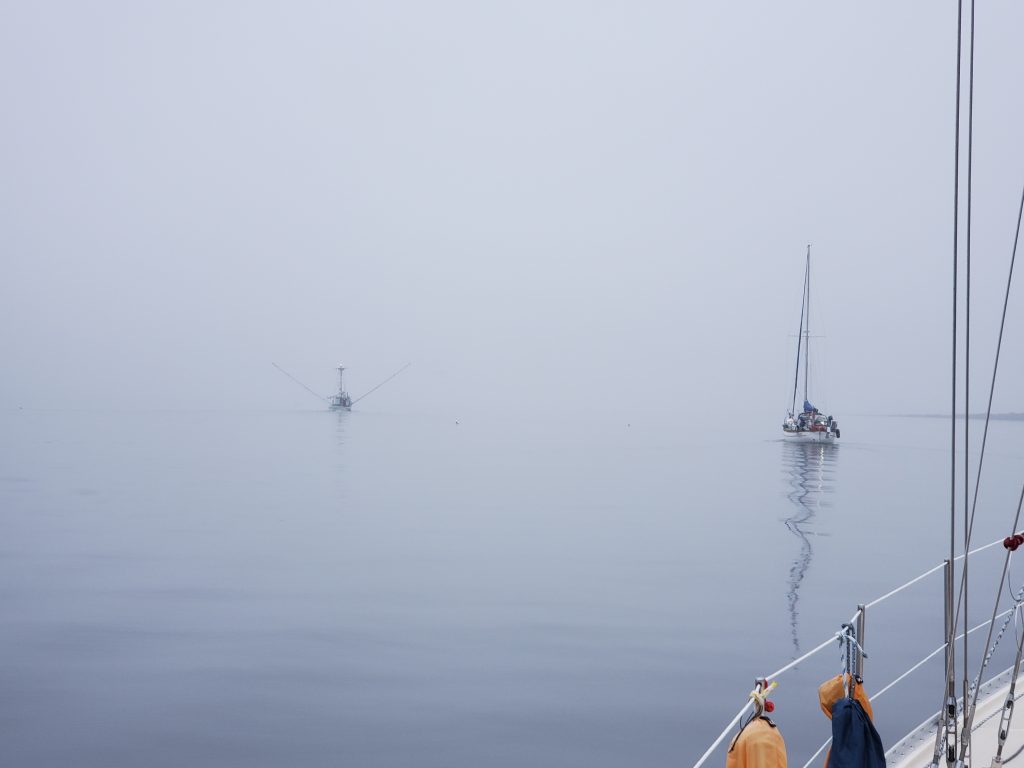 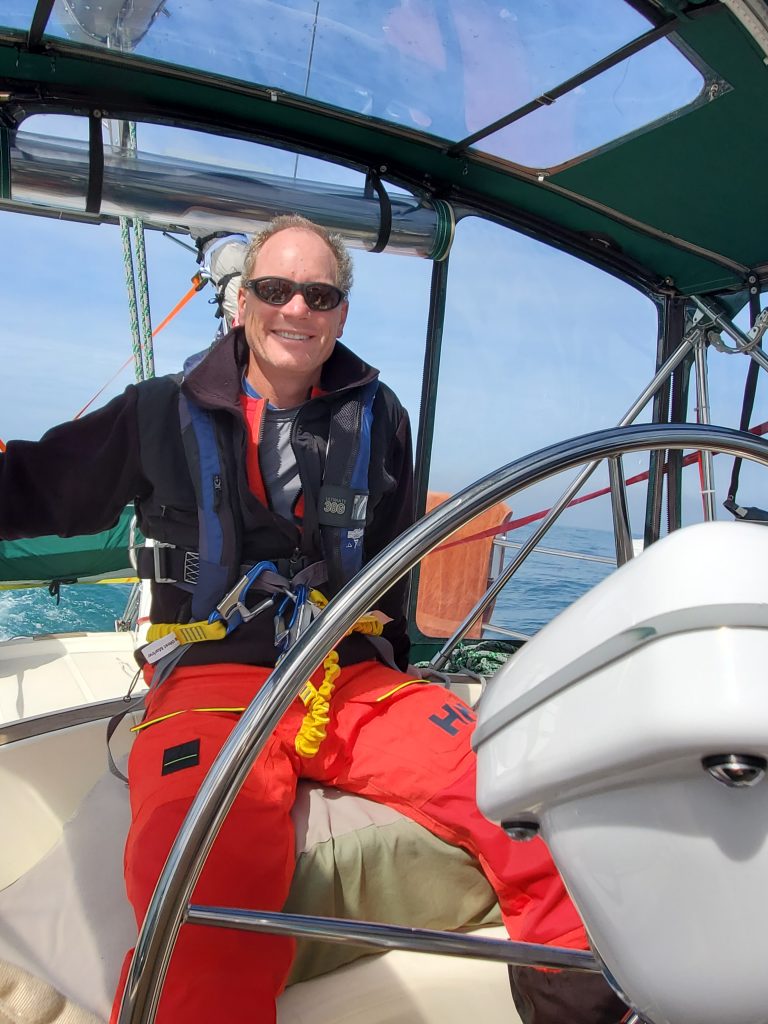 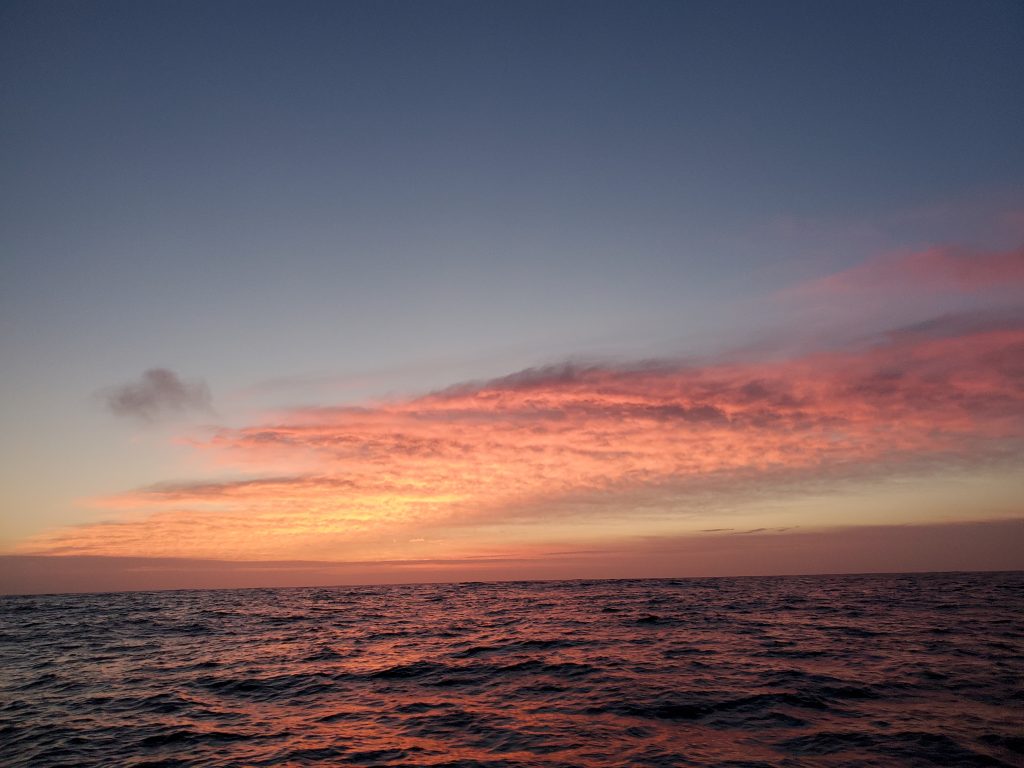 Day one was a struggle. At the end of the day we got beyond the fog, the wind was still not present but the sun helped our spirits. We were definitely in the deep end now, with over 12,000 feet beneath our keel.
Day two, what a difference a day makes! Sun, perfect winds, seas less confused. We put up the sails for 11 hours and just went under the power of Mother Nature. We averaged being 60-80 miles offshore the entire way, and I definitely felt small out in this big world! We were able to take turns riding the bowsprit seat and saw sharks and jellyfish in the clear blue water. At night the wind decreased and we started the motor but kept the mainsail up to help with stability. The forward motion of the boat with the motor creates its own wind and with the sail up, it causes a bit of a push to one side and decreases the rolling back and forth motion from the waves. So nice! Beautiful! We all took 3 hour shifts. I had 5 to 8 am and again pm. It was perfect for me. After two days I felt like I was in a rhythm. We ate breakfast on our own, I made lunch, snacks, and dinner that we ate together and I put together snack packs for the night shifters. They were a big hit including the little notes I left on the napkins. LOL! This bliss continued through day 3 and 4, sailing all day and motor-sailing at night. We saw porpoises racing us on the waves, bioluminescence all around us in the dark, whales fully breaching out of the water, and a Mola Mola fish (Sunfish) right at the surface! At night we kept track of ships on our AIS and radar in the moonless blackness. The stars were amazing 60-80 miles offshore with no ambient light, though it was a bit disconcerting to be unable to see even the waves riding up under our stern. 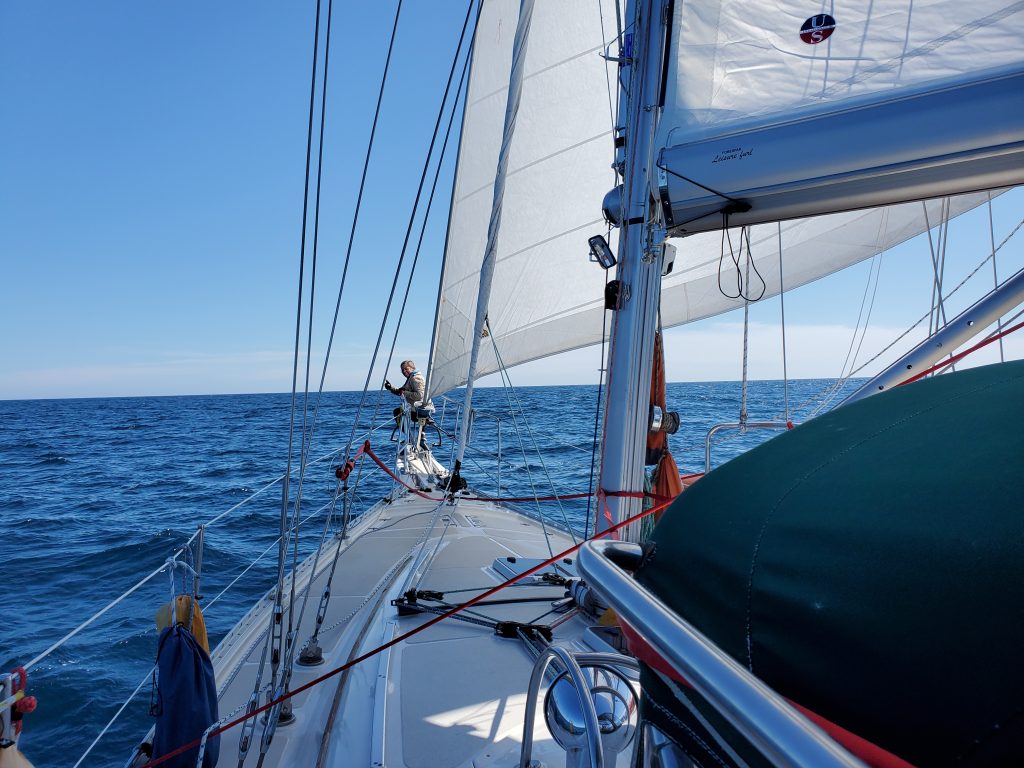 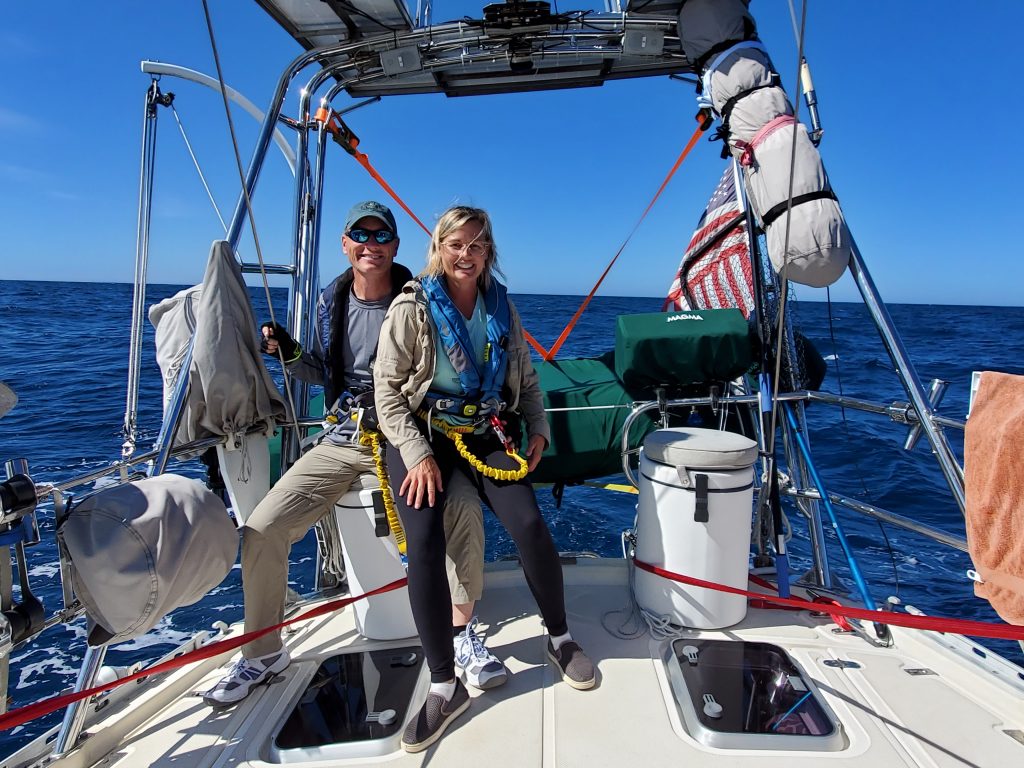 Day 5, Mother Nature let us know she was just being nice. We had winds 25 to 35 knots which is a near-gale. The swells were 7-10 feet and together with the wind waves we were having a wild ride. Some Sea Lions joined us, leaping and surfing with us. At times we were surfing down waves at almost 12 knots, which is 3 knots more than our hull speed YIKES! I thought Sacagawea was going to face plant into a wave but each time she danced with the waves and up she came! Well, the speed got us to San Francisco in the dark at 10 pm, so we pulled into Drakes Bay at Point Reyes National Park. Ironically, after five days at sea out of sight of land we STILL couldn’t see land and had to anchor using the chart and radar. LOL We finally slept in stillness and quiet. Ahhhhhhh. Tomorrow, Golden Gate Bridge here we come!!!! 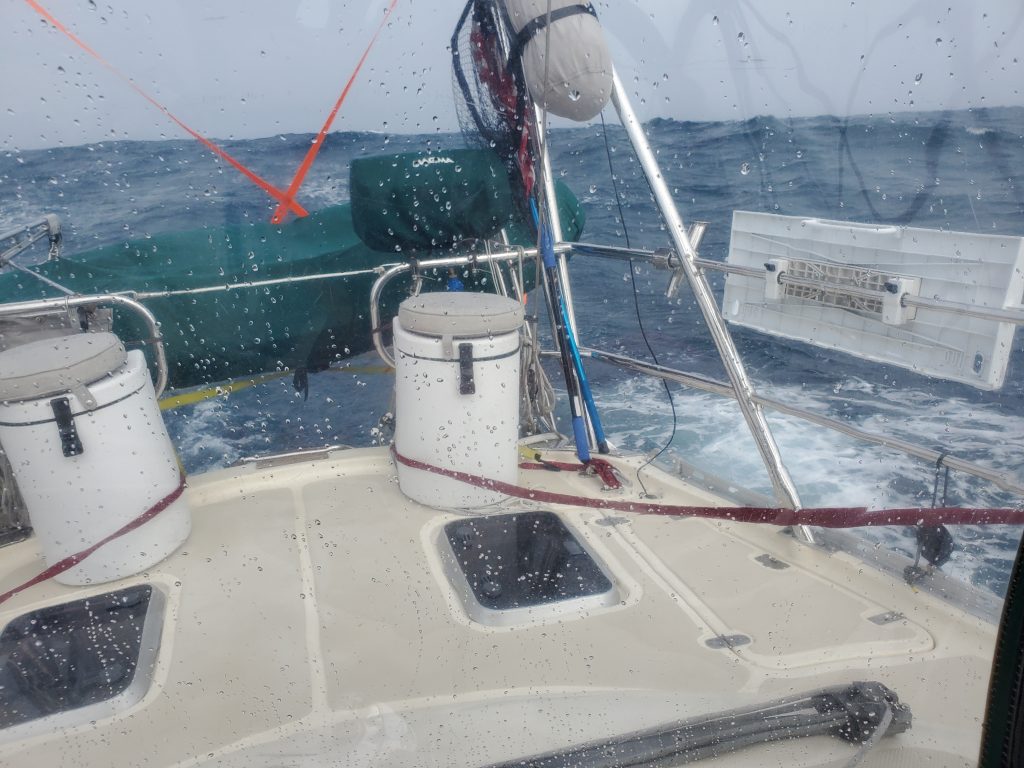 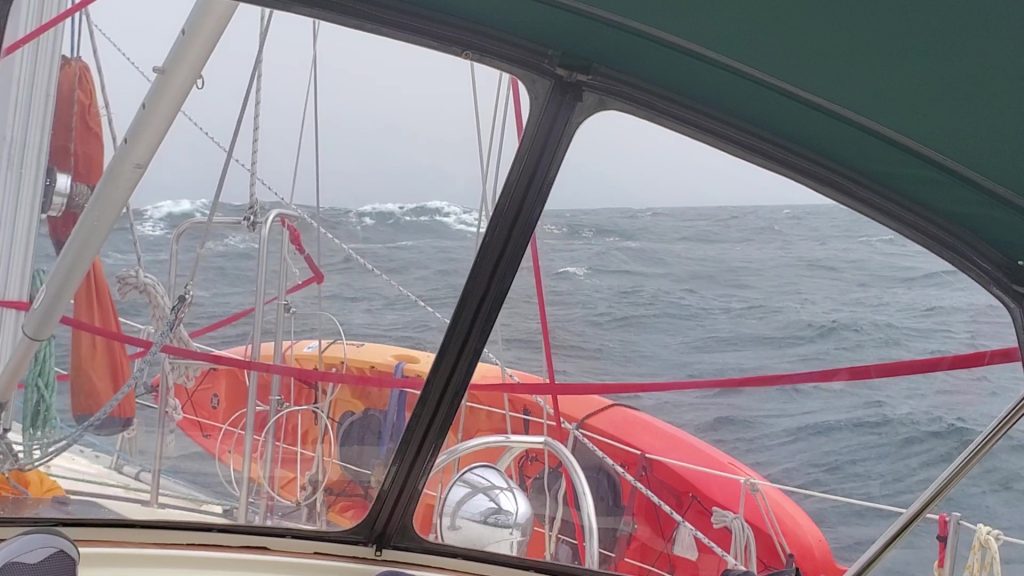 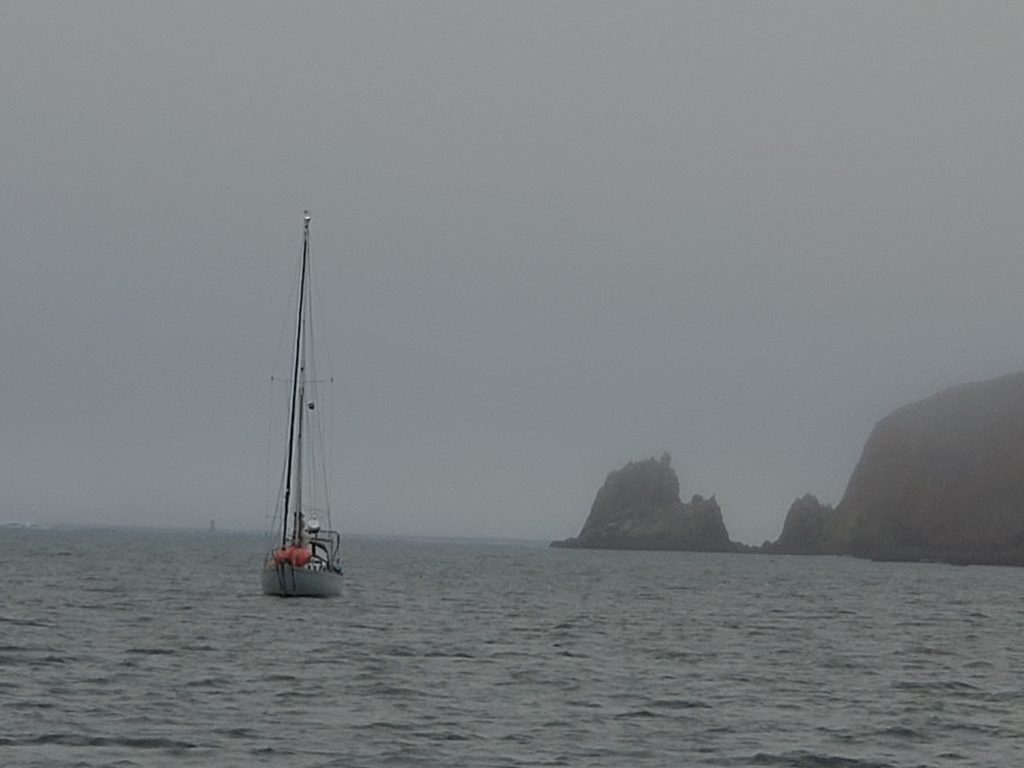 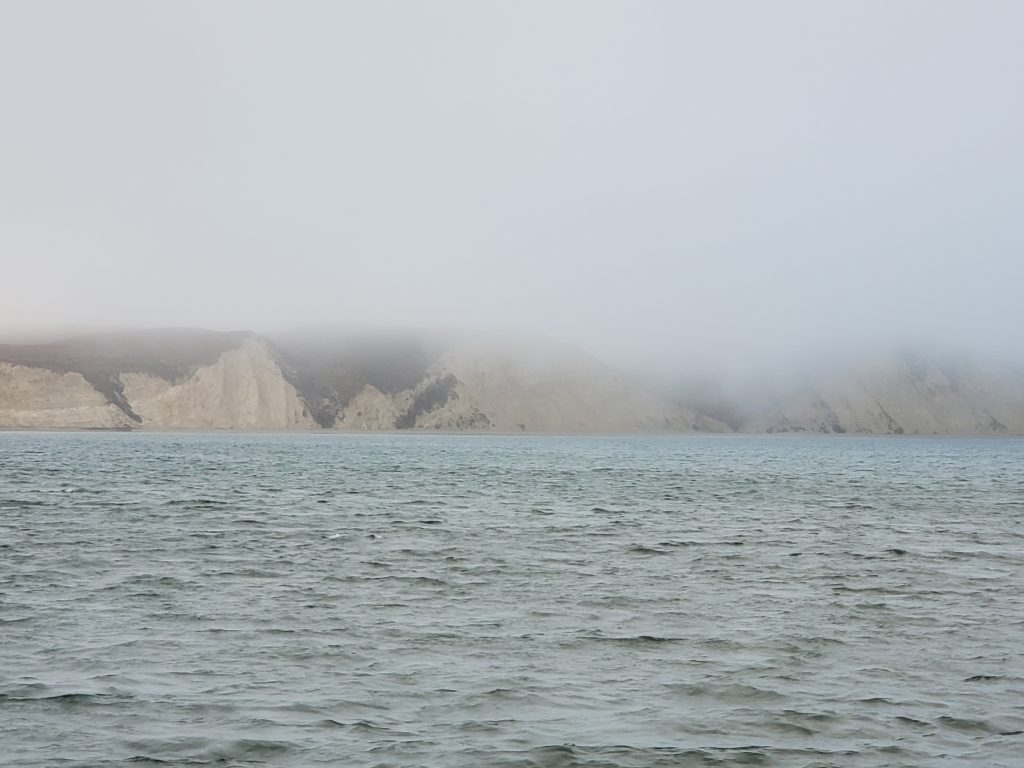 Up early after a short night’s sleep to catch the tide into the Bay under the bridge. We saw a BUNCH of whales on the way to the bridge! As we turned the corner to the final run we put up all the sails in a freshening breeze and sailed under, taking photos between gybes. We made it! All of the uncertainty and Covid-curtailed itineraries behind. We are HERE! 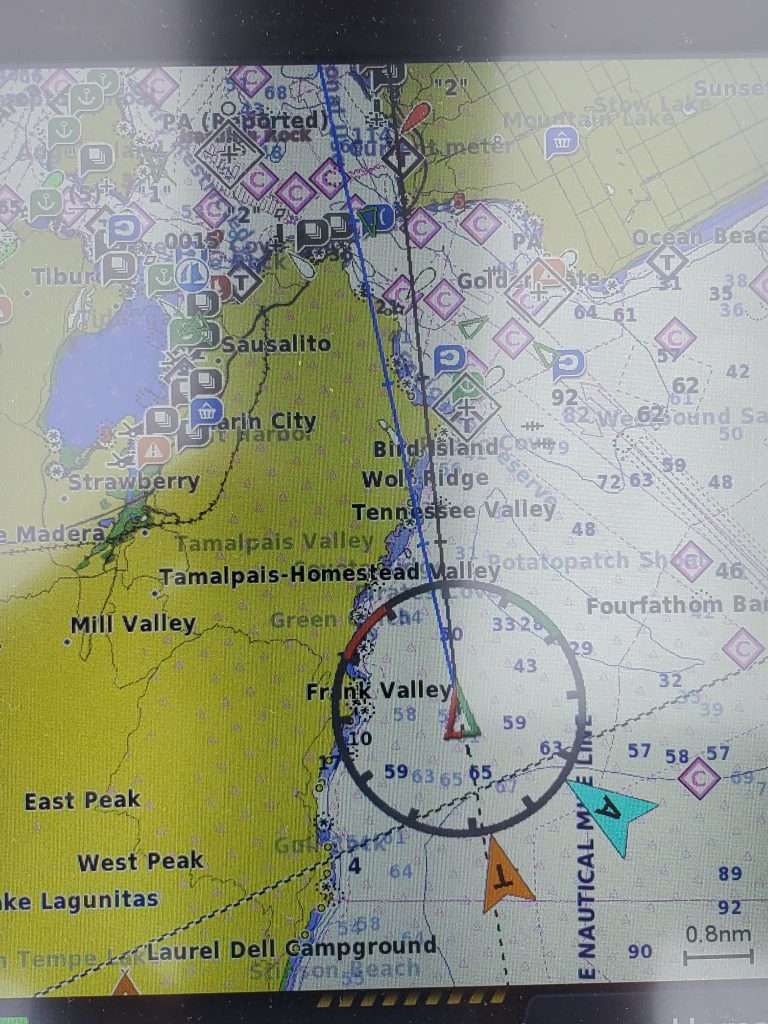 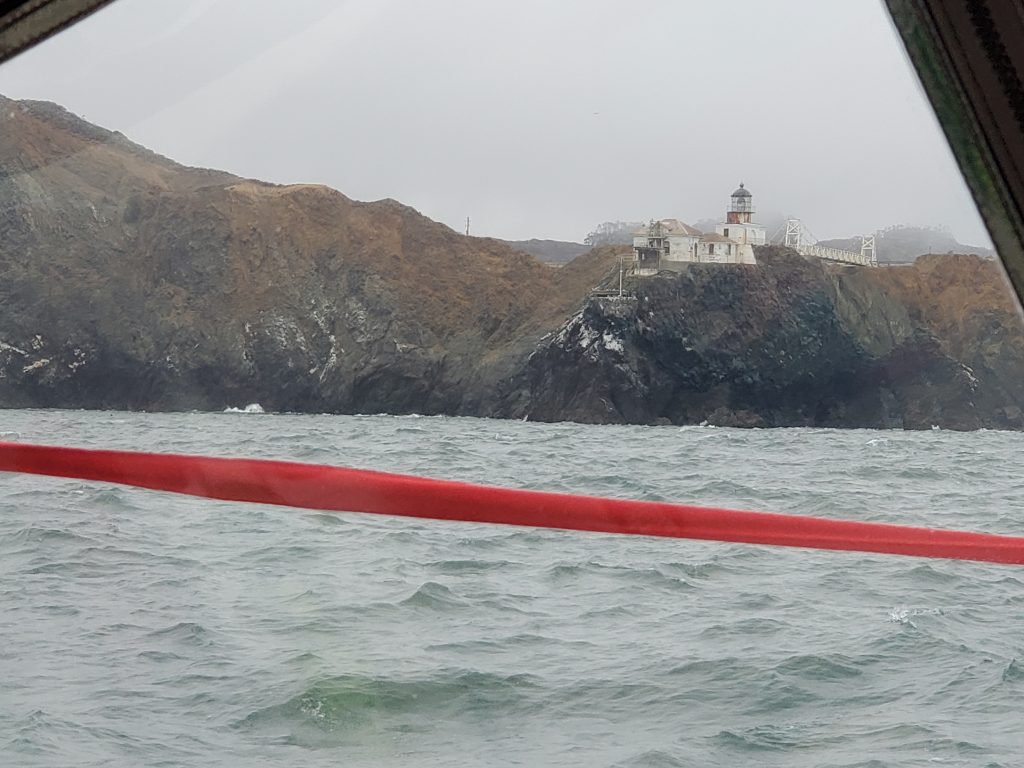 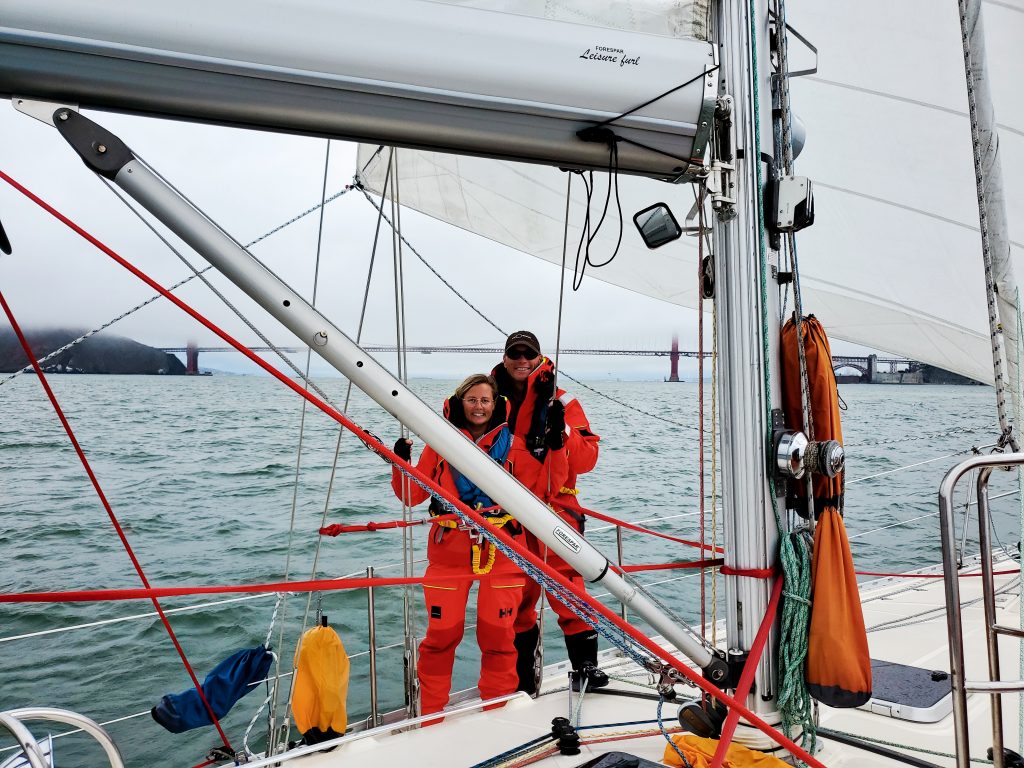 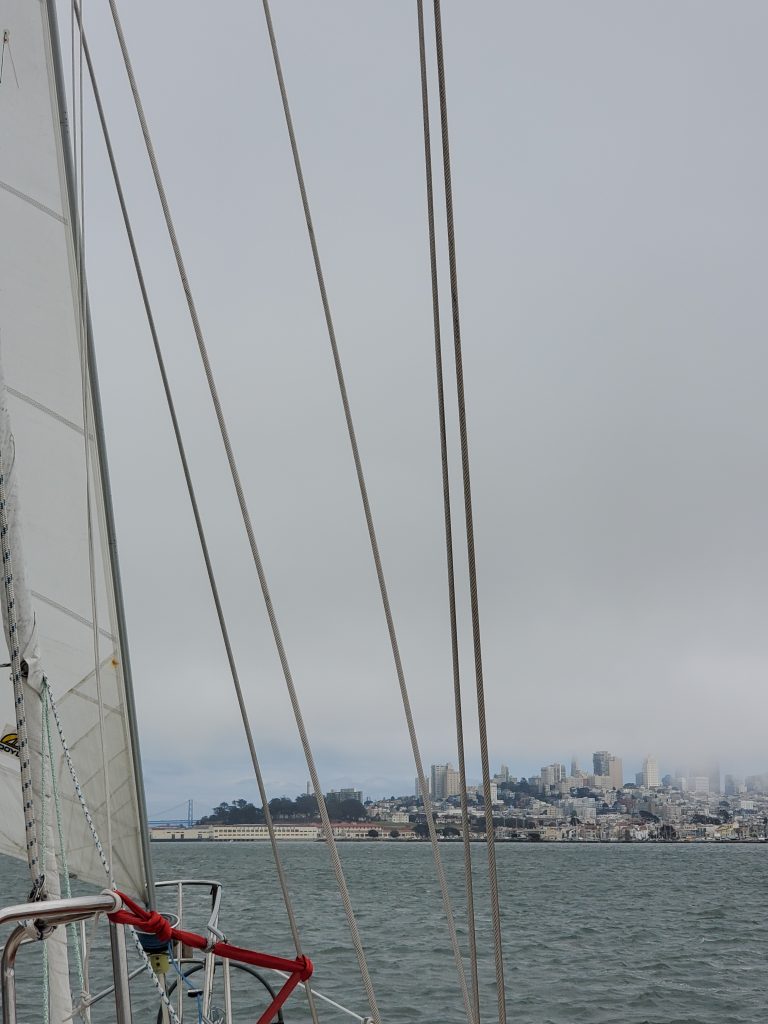 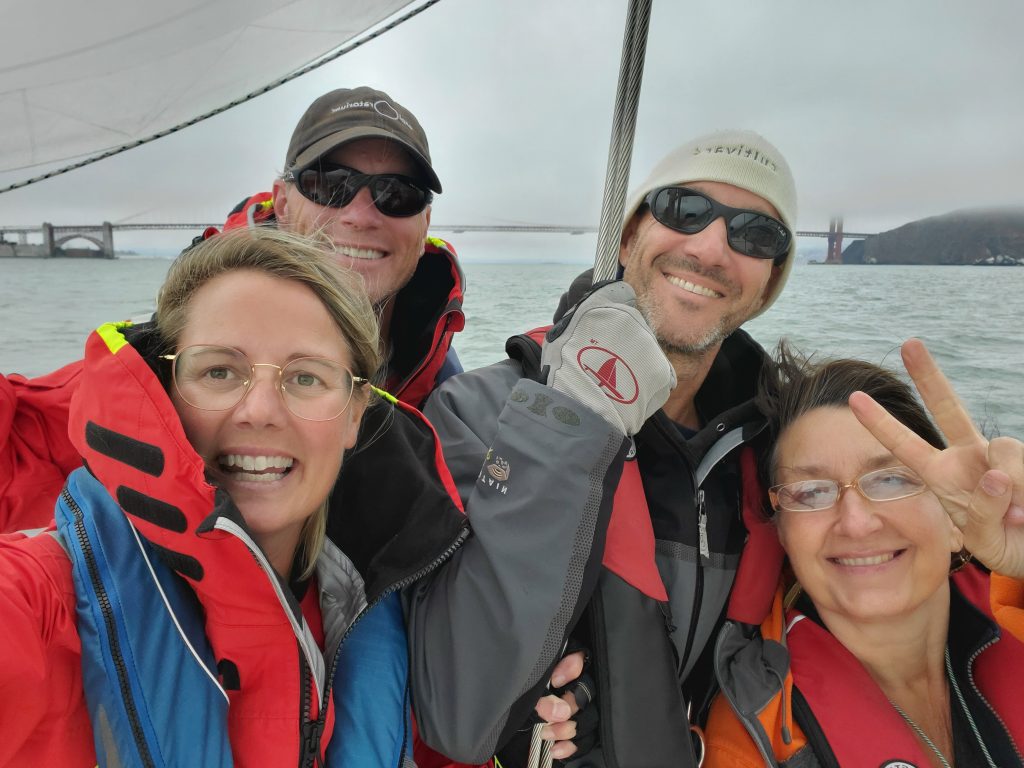