Today, we are heading into uncharted territory! Well, uncharted for us anyway. Today we head across the Strait of Juan de Fuca. This body of water would take us right out to the Pacific Ocean if we turn right. Next August we will turn right! Today, however, we are going straight across to Sequim Bay and John Wayne Marina. The history is that John Wayne and his motor trawler Grey Goose used to anchor in the bay frequently. Eventually the family donated money and the marina was built. Our plan is to anchor outside the docks and in the bay as John Wayne did.

The weather was good. No wind but today I will not complain because the Strait has a reputation for being challenging with high seas and big winds. We motored all the way across in nice flat calm seas. 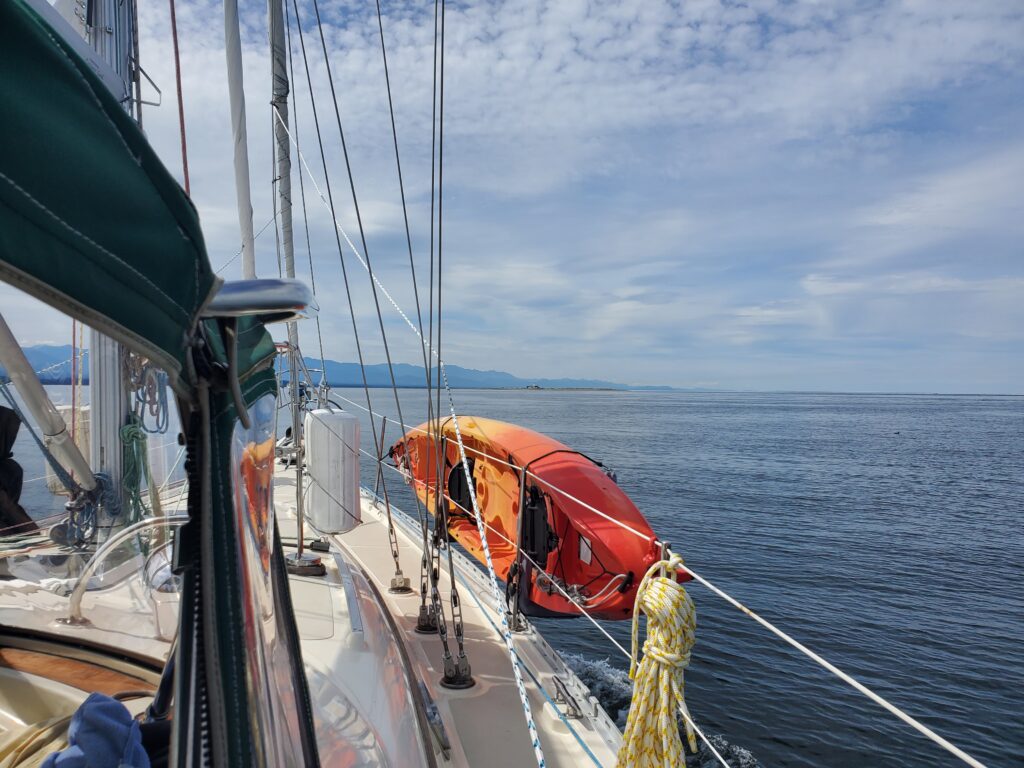 We took a side trip to see the longest sand spit in the United States at Dungeness Bay.” What is a sand spit”, you ask? I did too. According to Google it is beach stuff; sand, shells, driftwood, etc. heaped up in a long narrow extension of the shore due to wind and current. The Arabat Spit in the Sea of Azov between Ukraine and Russia is the longest spit in the world at 68 miles. Dungeness spit is 5 miles long. I thought it was impressive. We did not go ashore and hike but saw other people doing that. It was just a big long tail of sand out into to water. It seems like it should be floating! 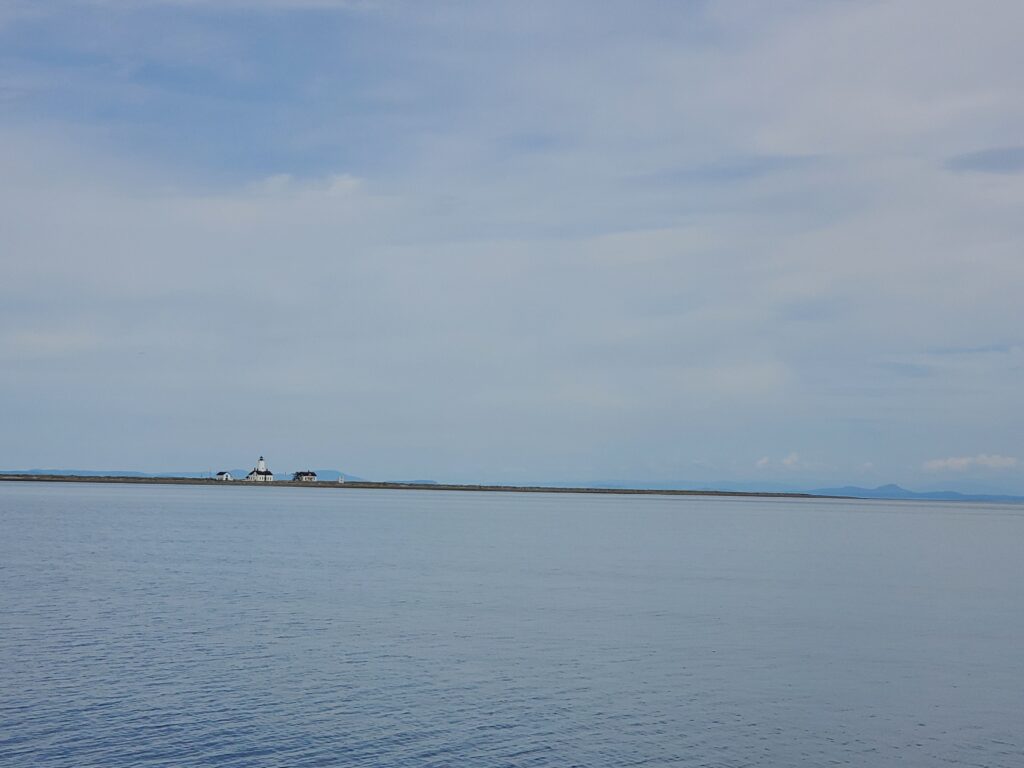 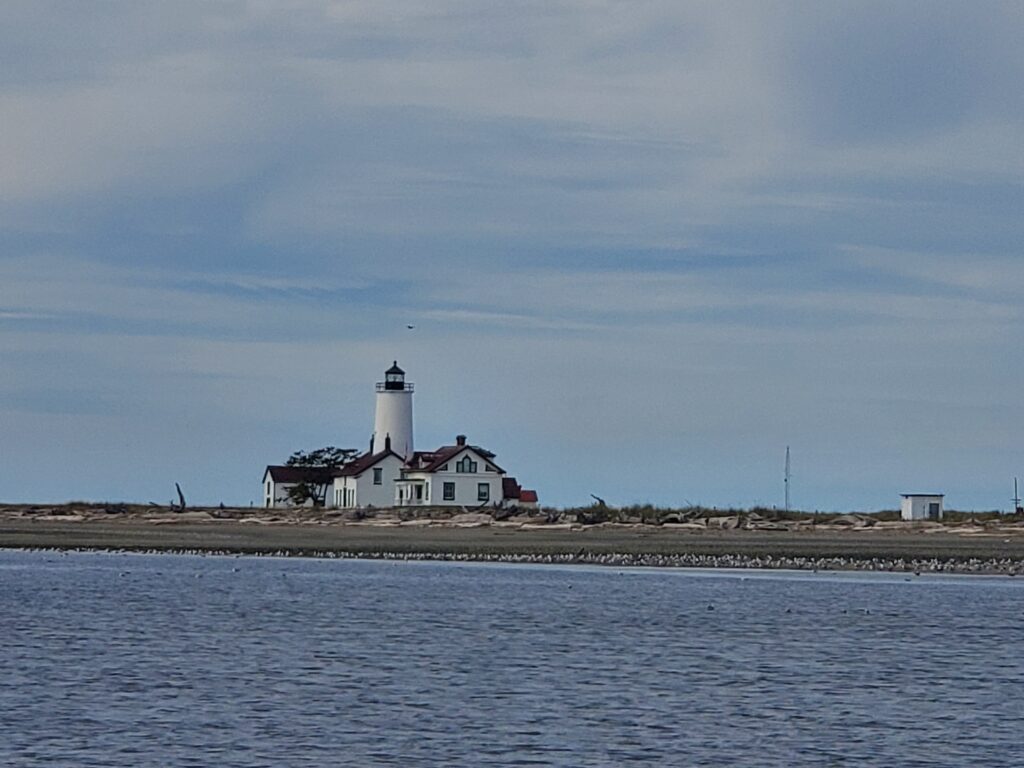 We worked our way into Sequim Bay and anchored just past the marina. Perhaps our anchor was dropped right where The Duke’s had been once. I tried to imagine being here in the time when John Wayne was here, when it was the middle of nowhere, undeveloped. What a wonderful escape!

The next day we lowered the kayak and paddled to Sequim Bay State Park. It was about a 2 mile paddle further into the bay. There was a nice little dock for mooring the kayak. We exchanged our sandals for running shoes and went exploring. There was a small stage we wondered how it was used in non-COVID times. Perhaps a nature talk? Maybe live music? There were areas for campers, other areas for tents, a bike path, and hiking trails. Nice! We spent an hour or so running around, then headed back to the kayak. 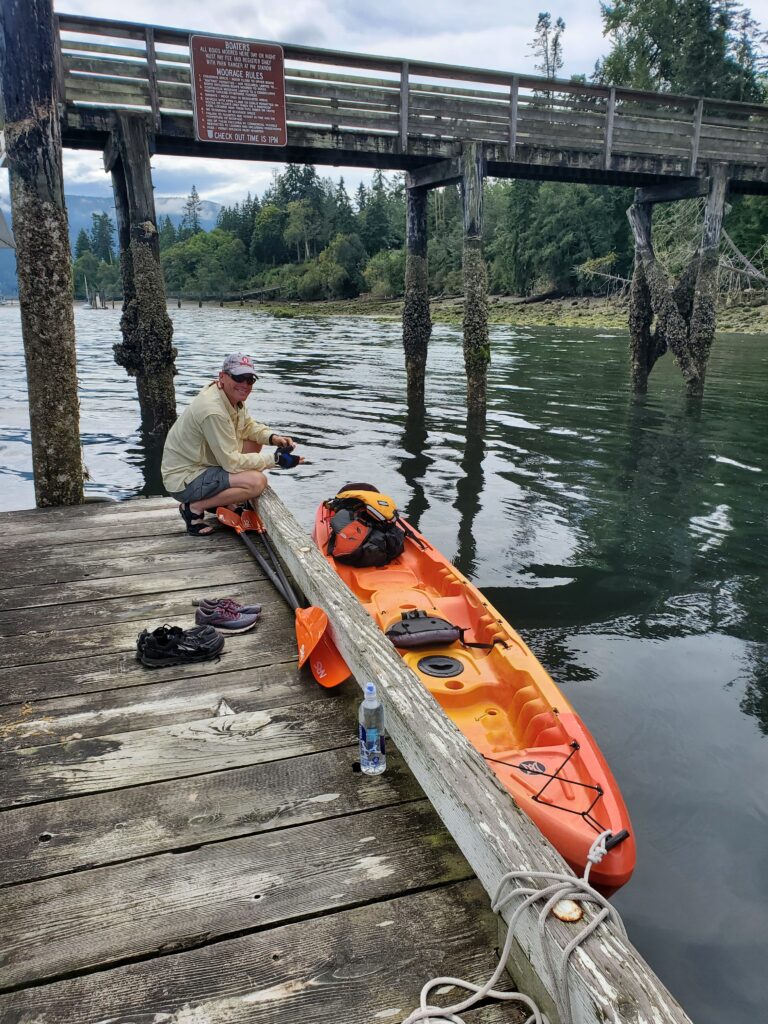 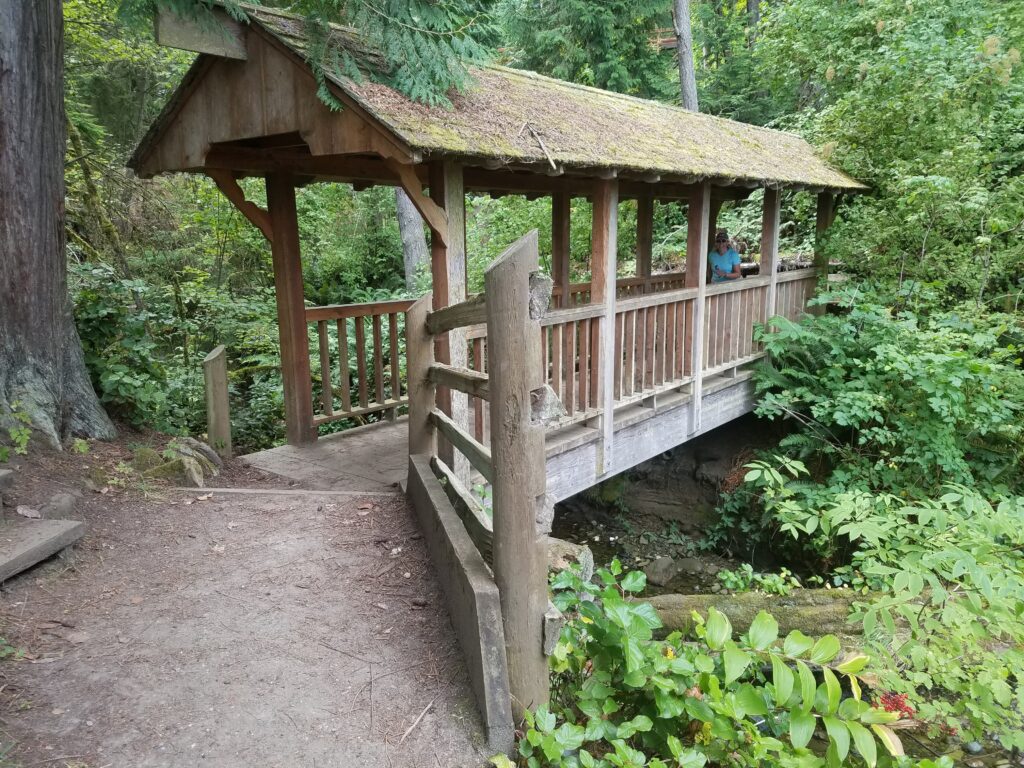 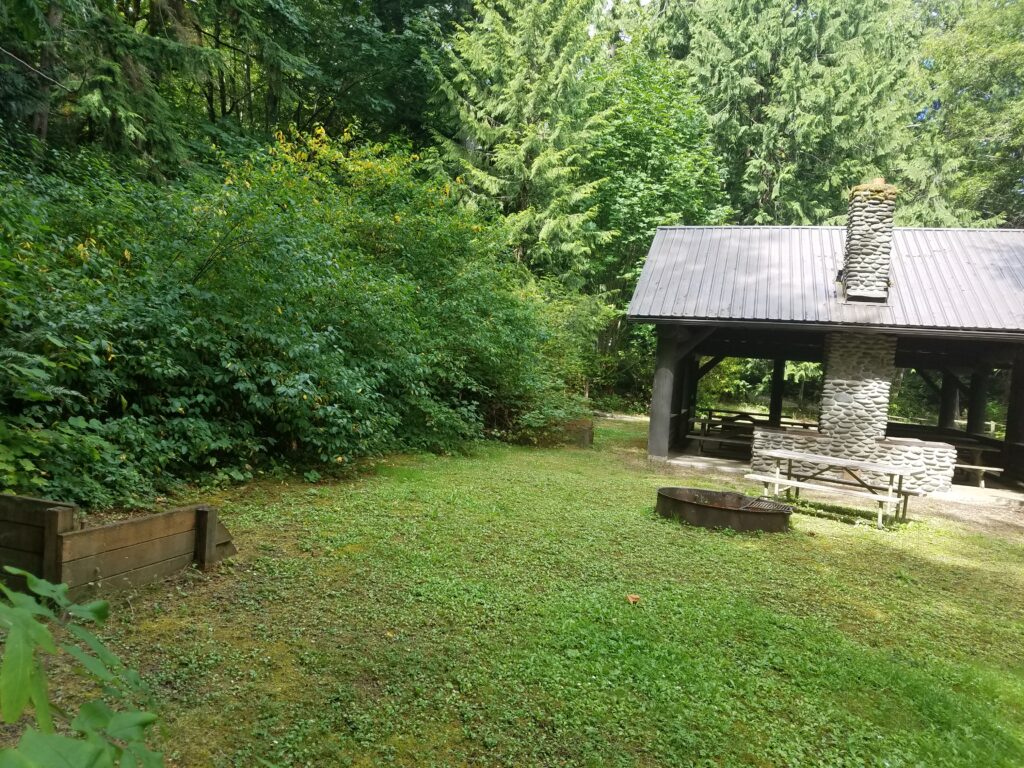 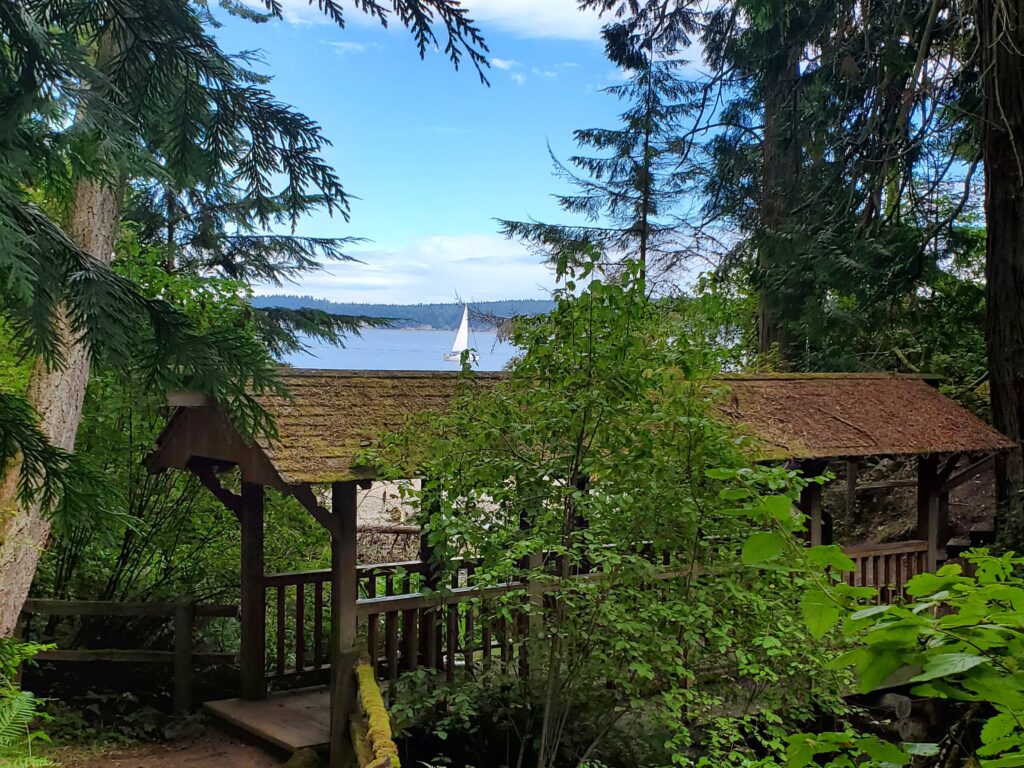 We had a nice paddle back, followed by lunch and chores. 2 loads of laundry (yes it works!), unclogged the shower drain (not so bad) and worked on the dometic heater/air conditioners that were not circulating water. We started our investigation of the dometics at the seacock right where the system is picking up the water from the sea. From there, we worked our way along the pipes toward the dometic unit, loosening each connection proving that water was flowing to each section by causing temporary leaks. Messy! We went all the way to the dometic water pump itself where the impeller, a little fan-like piece of rubber, spun the water into the system. All areas were getting water without impedance. We tried turning the dometics on again and it worked! We think there must have been an airlock at the impeller? The heat came on and the humidity went down, heaven!

We stayed one more day in Sequim Bay chillaxing. We took some time to try to understand what is happening with the water tanks. They used to last us one week each. Now they are “going dry” in 2 days. They are supposed to be 130 gallons each and now when we fill them the overflow starts spitting at about 80 gallons. Do the tanks actually get empty? Are the tanks actually getting full? Did our tanks somehow get smaller? Our water tanks are built into the hull, they are “glassed in” an integral part of the boat and there is no way to look inside. One of our theories is that maybe the pickup hoses that go into the water tanks are damaged. Possibly a hole or missing piece is not allowing the whole tank to be accessed only allowing half of the water to be used. We could not figure out a way to evaluate the pickup hose. If only we had a little fiber optic camera! We will figure it out later. Tomorrow we need to get going early to get out of Sequim Bay between the tides at about 6:30am. Yay! More new places to explore!