The stern tube fabrication was finally completed on Wednesday and it does look lovely! Inside the stern tube goes the cutlass bearing. A tubular piece with rubber bumpers inside that support the shaft to keep it centered. It did not fit. It became a Goldilocks situation! The smaller one was too loose, the next size up was too tight. They tried to lathe down the larger one and the wall became too thin. So, they slathered epoxy over the smaller one and allowed it to cure over the weekend. Monday they used the lathe to remove an exact amount of material measuring to within 3000th of an inch. It was just right! Yay! Yes, we asked that they make another one. Like fine art, only two exist in the world. 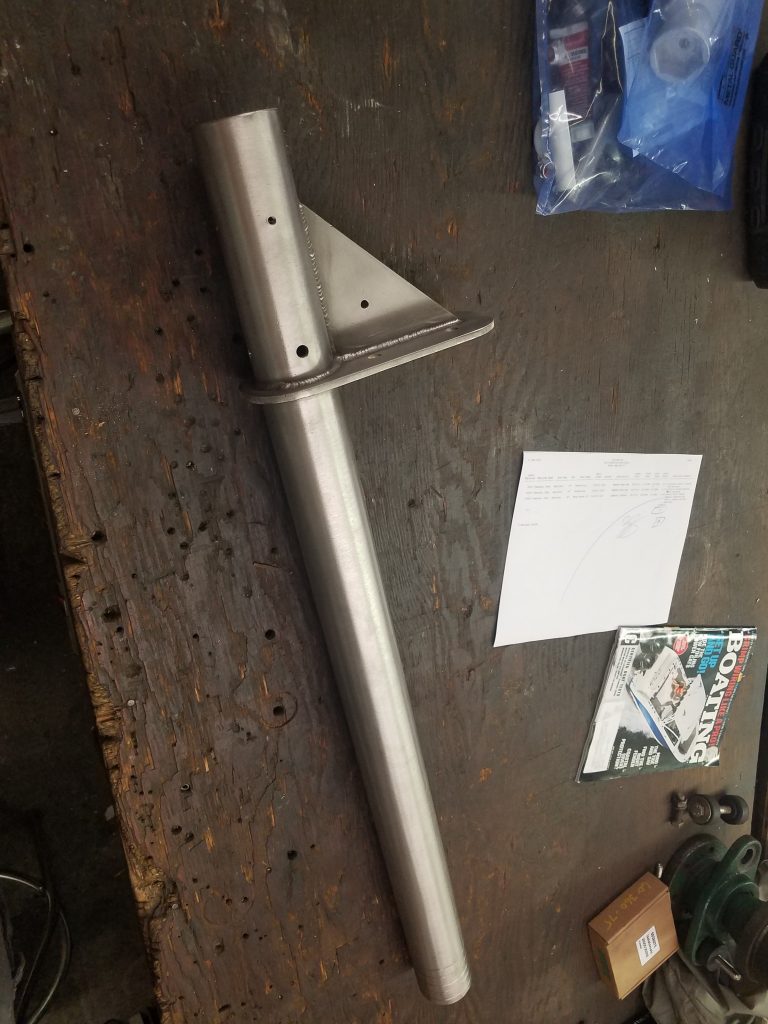 Tuesday, August 24, Tom put the whole thing together. We were excited when we got to the boat in the morning. The shaft, the tube, it was starting to look like normal! But, it looked a little crooked. Maybe it needs to be tightened up to the correct torque?

Tom had Wednesday off so everything sat, no progress. Thursday we showed up to an empty hole again. I guess it was crooked. Oh, boy! Why?!?!? The plan is to scrape out more of the “bog”, the bedding resin we (Bill) helped drill and chip out back when the old stern tube was birthed, to create a wider tunnel which will allow the stern tube to be adjusted to exactly center the shaft within that tube. That will start on Friday. Ugh!

We got an invitation to help sail one of the Coho Hoho organizer’s boat up to Port Townsend (about 30 miles away) on Friday to participate in the sendoff of the final boats (except us) in the Coho Hoho rally! Of course we will go! Yahoo, a weekend on the water, and the weather was forecast to be sunny and 70. It was fun to sail with a racing captain and learn some finer points of sail trim, though a lot of the day was spent motoring in no wind. Friday evening several boats and crews were there and everyone met for some beers and excited conversation. Saturday we took the morning to wander around Port Townsend, a historic town with nice architecture and pleasant streets and trails. Port Townsend was slated as “the New York of the west” for a time and was considered a possible site for the capital of Washington state. With no rail road built into the area, Port Townsend never became the bustling city its potential predicted. Rather, it has remained small and quaint. 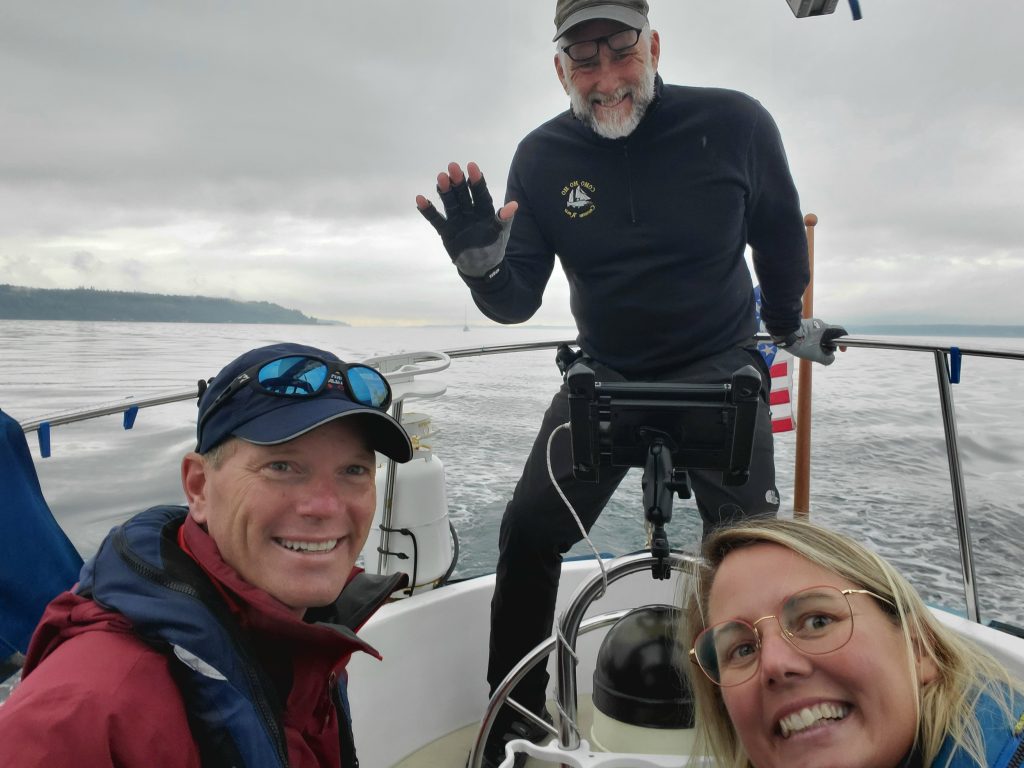 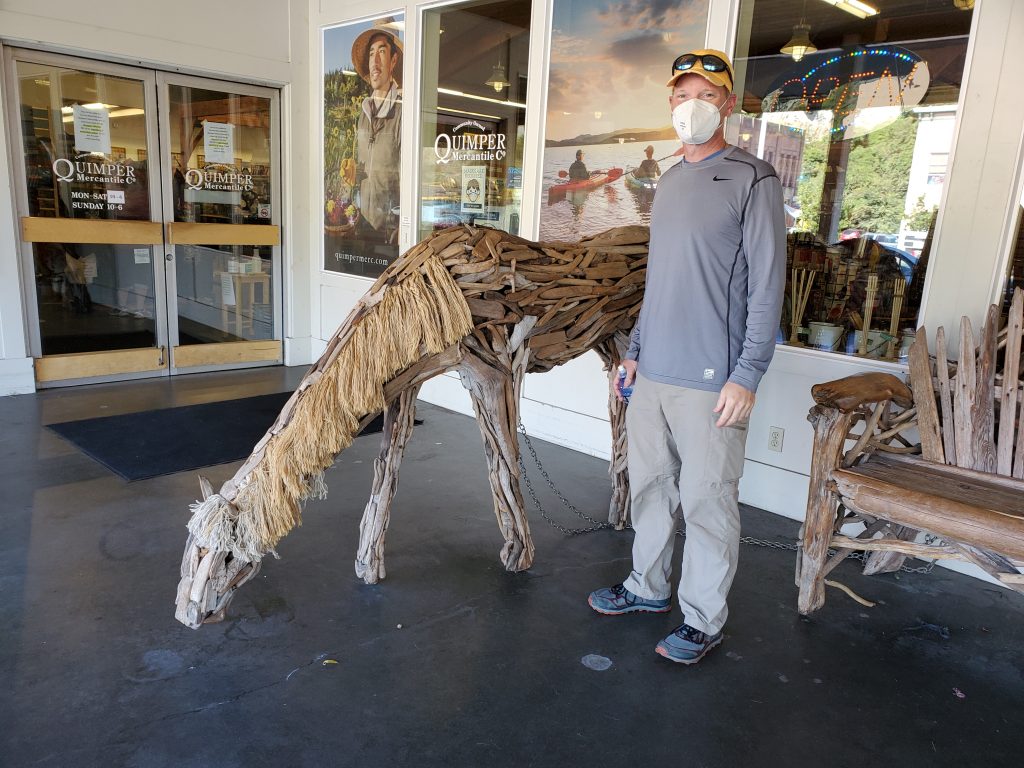 During our wanderings, one of the Coho members who were 60 miles off the coast near Newport, Oregon contacted me on their satellite device “We have a medical emergency, please call ASAP.” One of their crew members got hit in the head and was “unconscious, left eye purple and with laceration, blood coming from the right ear” I tried to call but didn’t connect. We started texting. “That is a life threatening head injury. You need to call the coast guard and get her to land ASAP” We went back and forth through several hours. I wish I could have been there for them. Eventually the Coast Guard did arrive, the woman was put in a floating basket style stretcher, lowered into the water, swum over to the hovering helicopter creating 80 to 100 MPH winds, and hoisted aboard. All day Bill and I discussed whether this story should be shared with the Coho fleet leaving the next day. We didn’t want to scare people and we didn’t want to tread on privacy issues. We decided it was a learning opportunity and needed to be shared. We did some research about how a Coast Guard rescue takes place, some things to be prepared for, documents to have at the ready. The announcement and prepared information was received well at the evening meeting. There were good questions. We were asked to consider doing a seminar on the topic for next year’s fleet. By the end of the evening, thoughts returned to the excitement of setting off tomorrow.

Sunday morning there was a blessing of the fleet with wine poured in all directions to the ancient gods of the sea and winds. Next there was much loud blowing of the conch shell, blasting of air horns and of course woohoos! Each crew returned to their boats to prepare to set off. The Coho leaders and Bill and I walked to each boat when they were ready. They released all of their dock lines but one. Then a selected crew from that vessel literally cut their final attachment to the Pacific North West and off they went, waving and hollering with us waving and yelling back “Fair winds and following seas to San Francisco!” Everyone was supportive of us. “You will be out here soon!” “We will see you down there!” “We will follow you on the tracker!” What a wonderful day! It was like really good dark chocolate; rich and bitter sweet. 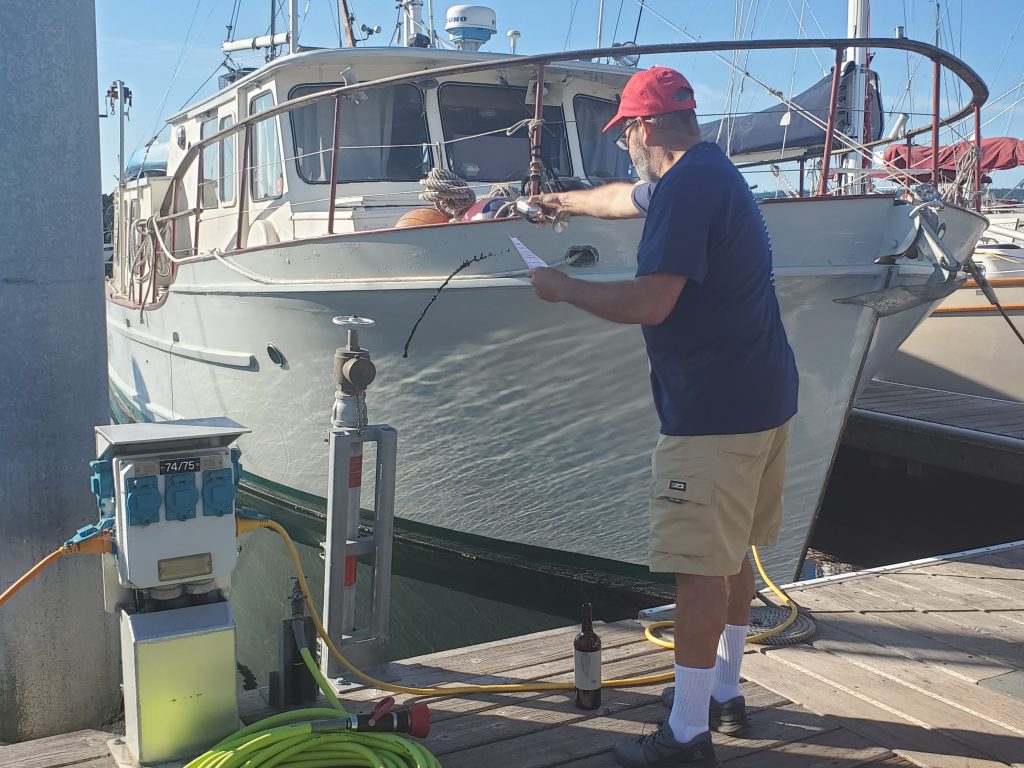 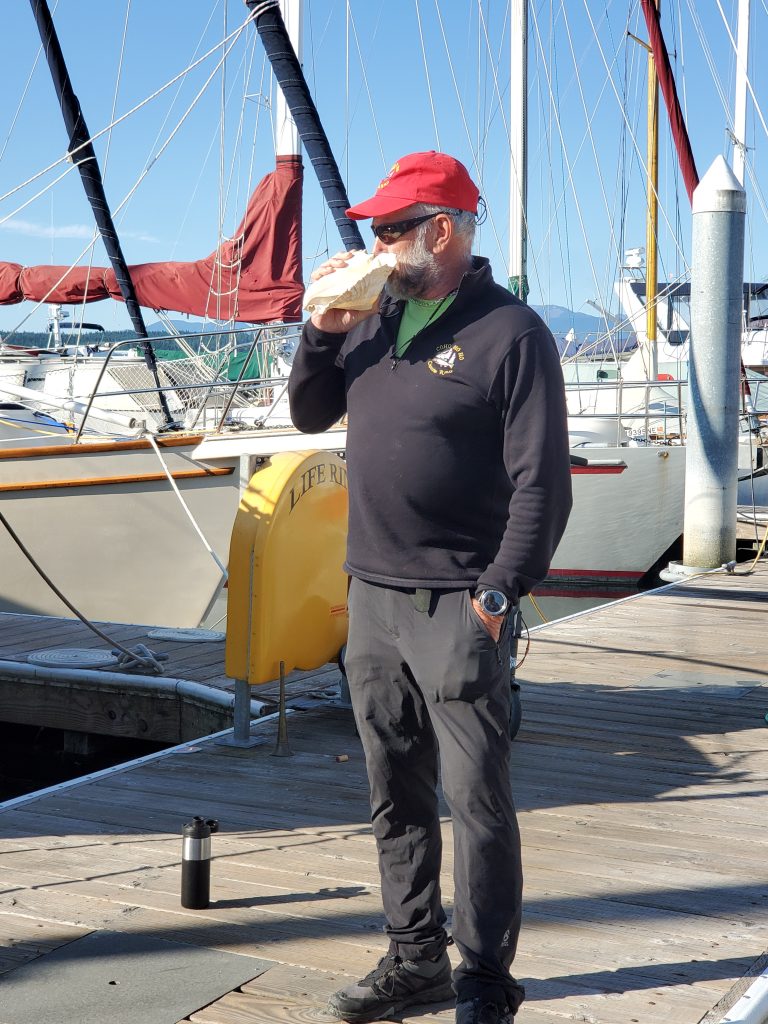 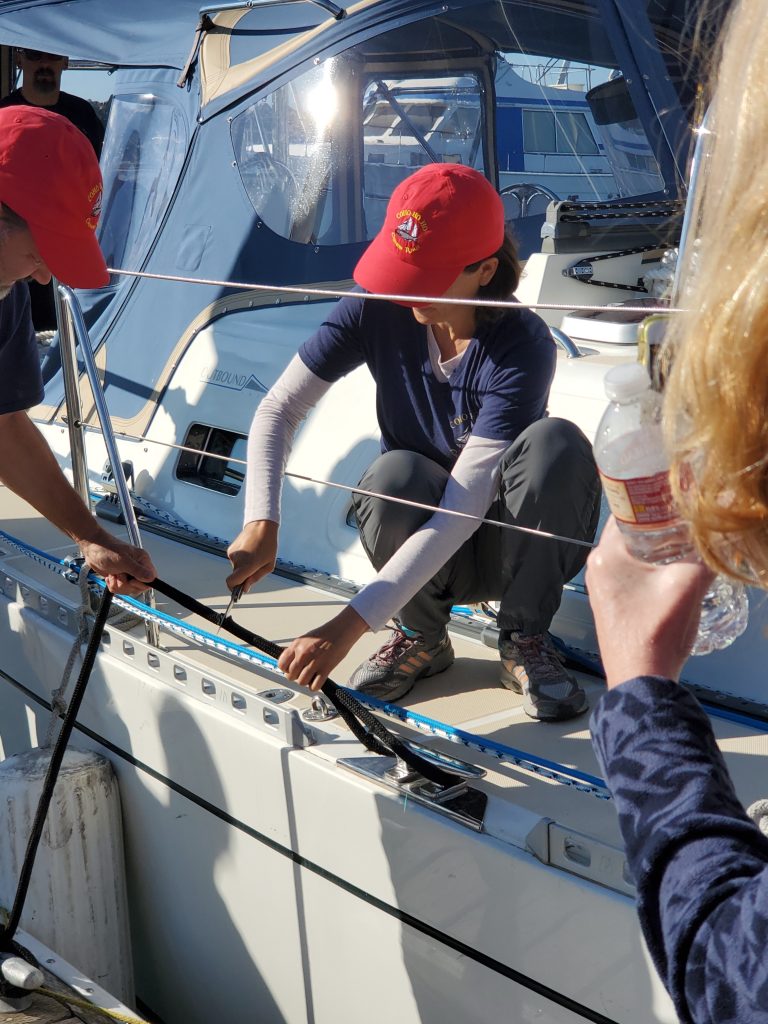 Monday morning we arrived back at our boat with renewed enthusiasm and fresh memories of why we want to do this. To our surprise, the stern tube, shaft, propeller, all of it was in! Wow! Yay! We went inside the boat and could smell the sharp fumes of resin curing. Looking into the hole, we saw the hardening resin swallowing up the water injection hose for keeping our new shaft cooled. Bill reached down and was able to pull the hose out but the two small one inch hose clamps remained embedded. We hooked them with a coat hanger, grabbed them with channel locks. Nope, they are stuck. What happened? The little wooden dam setup to contain the bog resin leaked. It leaked into the bilge but luckily it stopped short of the engine compartment. It is amazing how fast a happy mood can go down the toilet.
We found Tom and explained the situation. He promptly blew a gasket, ripped off his Tyvek suit and said “I am going home I can’t deal with this s*@t, why can’t anyone do anything right.” Many more cuss words and arm gestures later, he was gone. Not helpful!
We went to the project manager, another Tom, who said he didn’t know what was going on, couldn’t give us any timeline, but he told us that we are going in the water tomorrow.
“WHAT?!?!!!” we said with deer in the headlight eyes. He blank stared right back.
“Like going in and staying in? Or going in and coming back out?” we asked trying to sort out what was going on.
“I dunno” with a go ahead and push me look.
“What about the bottom paint, the fiber glassing, the anti fouling coat on the prop and shaft, the clear coat on the transducer?!?.” We said with exasperated arm waves.
“Oh, well I will have to talk to the paint guys. I don’t know.” Arms crossed and a go ahead make my day Clint Eastwood look.
We walked away in stunned silence. Does anyone know anything? Was he talking about the right boat? Maybe he was confused and didn’t realize which boat we were with. I often felt like he didn’t know who we were. When we asked, “How are things going?” “Any idea when we will be done?” “What other steps remain in the project?” We were usually met with a why are you bothering me attitude. Maybe this whole time he couldn’t remember who we were and after 2 months he was embarrassed to ask?
We, and by “we” I mean Bill, called one of the owners of the yard and had an animated discussion. Either there will be more communication and change in attitude or we are sunk, literally.

Tuesday we went back to the boat and found Mechanic Tom who apologized that he lost his cool. He was happy to report that they had already put her in the water, did the sea trial and had her back out and in the stand. No leaks, ran so smooth the guy at the helm commented this is one of the smoothest boats he has ever run. Yay! OMG! I can’t believe we are at this point. I feel like we started a marathon and at mile 16 went through a worm hole and came out at the finish line. Today they put on all of those paints we asked about and they will be finished curing Weds at 2pm. Of course, the guy who poured the rest of the bog today didn’t fill up the hole all the way, so that will have to be finished tomorrow, but they said that we will be going back in the water Thursday or Friday. Fingers crossed it is true! 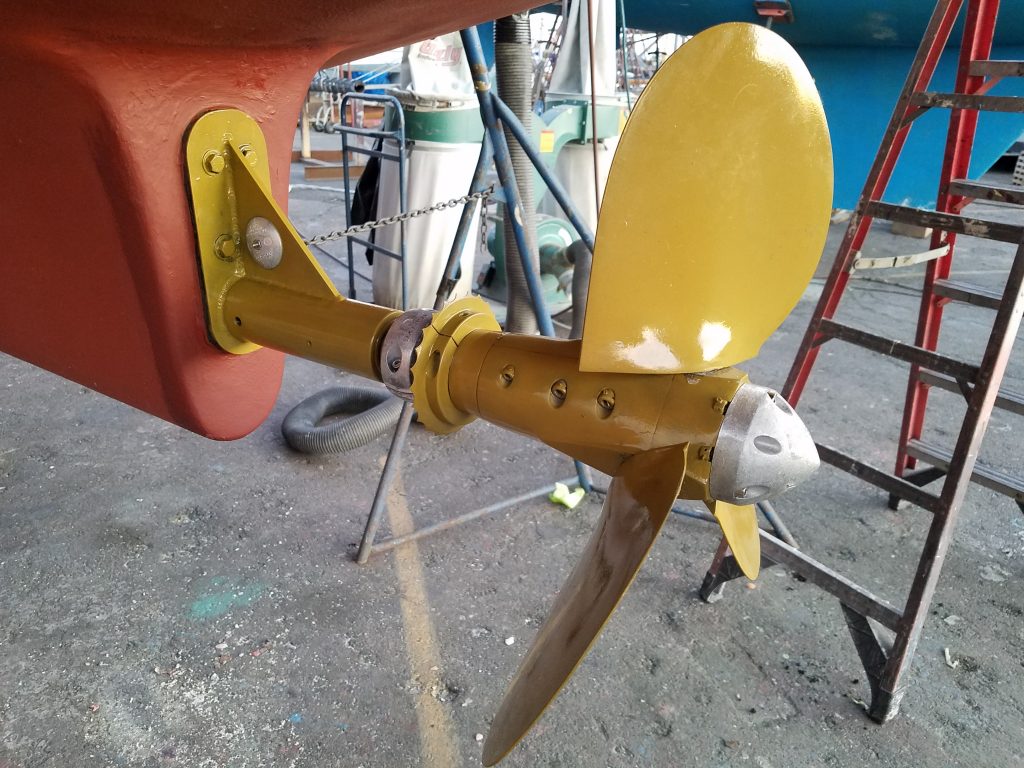 Wednesday (can you believe it’s September?!) we worked to try to finish computer and paperwork stuff we wanted done before we leave, and called Project Manager Tom late in the morning for a status update. He told us they were finishing up and we would be launched at 8 am on Thursday!! After the launch would be another test run, then cleaning up all of their stuff, then we would be free to go. Excited conference calls with our crew ensued, along with hurried checks of weather, winds, and tides. We determined a schedule- we will leave Friday midday for Port Townsend, then Saturday to Neah Bay, Sunday we will push off and turn left down the West Coast, Mama Nature willing!! Wow! We finished our work, printed stuff, made phone calls, rode our bikes to the grocery store for the final fresh produce, then to the boat. We packed away our bikes and trailer, then walked back to the hotel. Luckily that’s only 2 miles instead of the nearly three miles of riding the bike path. After packing up the rest of our things at the hotel in preparation for an early morning, we are left trying to sleep for a few hours before a REALLY long day tomorrow. Wish us luck!!!